Pompey’s unbeaten home record in League One will certainly be put to the test over the Christmas period.

The Tractor Boys are aiming to bounce back to the Championship at the first attempt after finishing bottom last season.

And Paul Lambert’s men made an excellent start to the current campaign, only to see their form tail off in recent weeks.

They have failed to win any of their past four league fixtures – which included a goalless stalemate with the Chairboys – and also exited the FA Cup following a replay defeat to Coventry.

The East Anglian outfit have at least progressed to the third round of the Leasing.com Trophy, seeing off Peterborough on penalties.

Ipswich do have an impressive record on the road, with seven of their 10 three-point hauls coming away from Portman Road.

The sides have not met since an FA Cup third round clash during the 2015/16 campaign, with Pompey upsetting their higher-ranked opponents in a Fratton Park replay.

TEAM NEWS
Lee Brown (Achilles) and Brandon Haunstrup (meniscus) are both missing after requiring operations on their injuries.

Christian Burgess is available again following a one-match ban, while Oli Hawkins could return having missed the last game following the birth of his son.

Bryn Morris (groin) is the only other player currently in the treatment room, while Jack Whatmough is not yet ready for selection.

Ipswich will be without Danny Rowe (knee) and Freddie Sears (knee), but Luke Chambers (neck) could be back.

TICKETS
Fratton Park is full to capacity for Saturday’s game, but fans can check the eticketing site to see if any seats become available via the ticket exchange.

BETTING
Pompey are the 23/20 favourites with Sky Bet to secure all three points, while the visitors can be backed at 9/4. 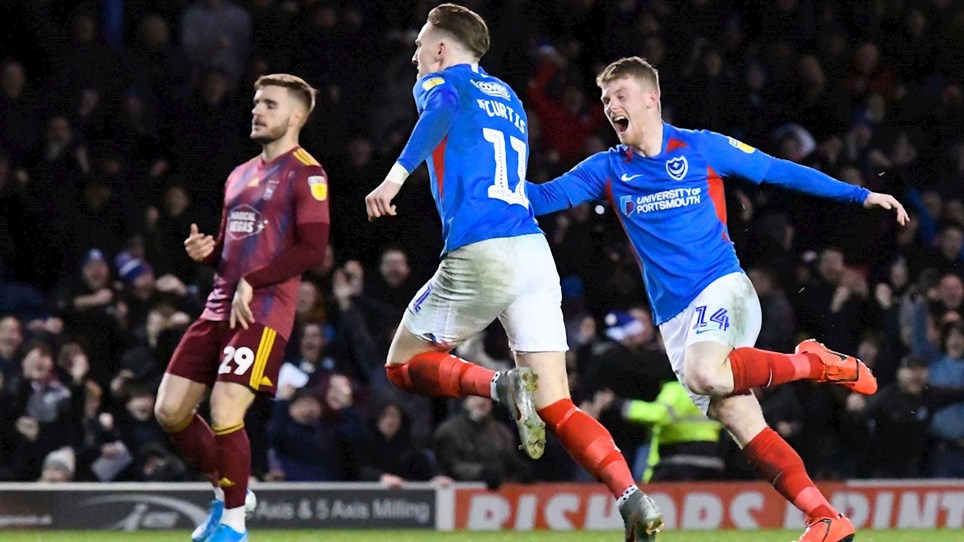 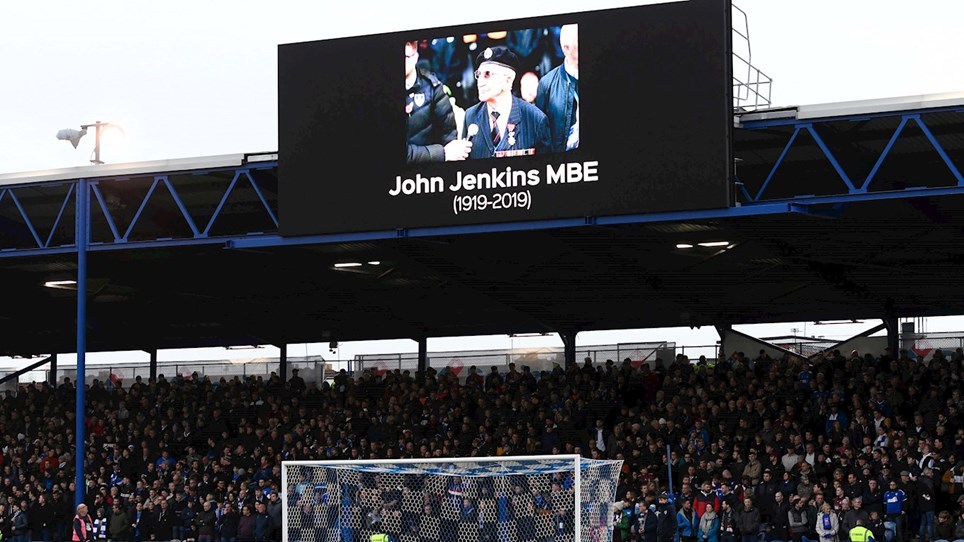 
Pompey saw off Ipswich at Fratton Park to move to within two points of the play-off spots.

Harrison: It Gave Us A Boost


Ronan Curtis’ fierce strike was the moment that most people inside Fratton Park will have gone home talking about. 
There is no doubt what is top of Kenny Jackett’s Christmas list this year – plenty of points over the festive period.

Ronan Curtis ensured there would be plenty of festive Fratton cheer by scoring the only goal of the game against high-flying Ipswich.

The margin of victory might have been narrow, but Pompey were dominant for much of the contest on a sodden south coast.

Will Norris came to the Tractor Boys’ rescue in the first half, although was unable to keep out Curtis’ fierce drive after the break.

And the visitors’ misery was compounded late on, as skipper Luke Chambers was sent off for a second bookable offence.

Kenny Jackett made three changes from the side that were comfortably beaten at Accrington the previous week.

Andy Cannon was handed a first league start for three months, while Christian Burgess returned from suspension and there was also a place for Ryan Williams.

That meant John Marquis, James Bolton and Marcus Harness all dropped to the bench, with Ross McCrorie moving to right-back and skipper Tom Naylor switching back to his usual midfield role.

There was a minute of applause before kick-off to celebrate the lives of Ron Saunders, Jim Smith and John Jenkins MBE.

The crowd also sang the name of the D-Day veteran, who sadly passed away earlier in the week at the age of 100.

Pompey dominated the opening 45 minutes and although there were not many clear-cut openings, the best ones fell to the hosts.

Ellis Harrison – playing against his former club – was booked with just 16 seconds on the clock and was then fouled by Toto Nsiala, who collected a yellow card of his own.

In between those transgressions, Williams’ effort took a deflection, forcing a wrong-footed Norris to react brilliantly to claw the ball away.

The keeper was at his best again soon after, this time to deny McCrorie after the ball had fallen kindly for the loanee.

And Curtis then fired a shot over the bar after Ipswich had failed to properly clear a Williams delivery.

There were more bookings as the half continued, with Gwion Edwards and Burgess punished by referee Brett Huxtable.

But Nsiala was lucky to escape being sent off when his challenge on Cannon was not even deemed worthy of a free-kick.

Tractor Boys boss Paul Lambert sensed his defender was walking a tightrope and withdrew him for Alan Judge.

Jackett was then forced to make a change of his own after McCrorie picked up an injury, with Bolton on to replace him.

The rain was falling heavily by this point, making conditions tough for both sides, although it was still the Blues looking more dangerous before the interval.

Pompey came so close to breaking the deadlock just seconds after the restart when Norris punched clear a Curtis cross intended for the head of Harrison.

The keeper was on the floor, but still managed to keep out Bolton’s effort, while a follow-up header from Williams was cleared from the line by a well-placed Luke Garbutt.

Norris did well again moments later, this time palming away a fine Curtis cross that seemed destined for the head of Harrison at the back stick.

The visitors finally had a shot on target on 49 minutes, not that James Norwood’s attempt from outside the box particularly troubled Craig MacGillivray.

Instead the Blues went up the other end to finally break the deadlock and it was the in-form CURTIS who got the goal.

The Republic of Ireland international collected a pass from Ben Close, cut inside and hit a ferocious effort that Norris could only help into the net.

Ipswich understandably began to play with a bit more urgency after falling behind, but were still doing little to trouble the hosts.

Jackett made his second switch just before the hour mark, with Cannon coming off to be replaced by Gareth Evans.

The Tractor Boys were starting to look threatening and after Alan Judge brought the ball down near the back post, the substitute hit a low shot narrowly past the post.

Pompey sensed that a second goal was needed and after expertly bringing down a long ball, Harrison’s cleanly-struck effort was kept out by Norris.

Evans then nipped in to collect the ball inside the box and evade a challenge, but was forced wide and Norris used his legs to keep out the midfielder’s angled drive.

The resulting corner eventually fell for Close on the edge of the box and he drilled a low shot inches off target.

It was a rocking atmosphere at Fratton Park and the crowd started up a chant of ‘Jim Smith’s Blue and White Army’ in memory of the former Blues boss.

Flynn Downes tried his luck at the other end and Bolton bravely flung himself in the path of the shot to avert the danger.

And Norwood then burst into the box – seemingly using his hand to control the ball – but could only fire into the side netting.

With the rain continuing to hammer down, there were a few players slipping and sliding on the slick surface.

Evans intentionally threw himself forward to try to get on the end of Harrison’s cross on 83 minutes, but could not quite make a connection.

Ipswich were forced to play the final few minutes with 10 men after Chambers fouled Harrison to collect his second booking of the afternoon.

The visitors’ bench were clearly not happy and assistant manager Stuart Taylor was also shown a yellow card.

Ipswich’s discipline had well and truly gone, with Luke Woolfenden and Kayden Jackson also forcing Huxtable to reach into his pocket.

The referee was being kept extremely busy and Pompey coach Jake Wigley was next to receive a booking for kicking the ball away.

Pompey, meanwhile, remained professional on the pitch to see the game out and collect the perfect Christmas present of three points.


Pompey saw off Ipswich at Fratton Park to move to within two points of the play-off spots.

Harrison: It Gave Us A Boost


Ronan Curtis’ fierce strike was the moment that most people inside Fratton Park will have gone home talking about.


There is no doubt what is top of Kenny Jackett’s Christmas list this year – plenty of points over the festive period.