Pompey switch their focus from one cup competition to another when they host Northampton in the Leasing.com Trophy tonight.

The competition holders eased through to the knockout stages with a game to spare, eventually taking top spot and guaranteeing a home tie.

Their opponents – who have never lifted the silverware – were runners-up behind Peterborough in Southern Group H.

A bonus-point draw with Arsenal was followed by a home defeat to Posh and a narrow victory at Cambridge.

The bigger priority for Keith Curle’s men, however, will be trying keep up their challenge for League Two promotion.

They are currently sitting in sixth position and are just three points outside the top three with more than half the season still to play.

The Cobblers – who relegated from the third tier at the end of the 2017/18 campaign – are unbeaten in eight games in all competitions and knocked Notts County out of the FA Cup at the weekend.

But their last visit to Fratton Park in December 2017 ended in a 3-1 defeat and they also lost on the south coast in an EFL Trophy tie that season.

TEAM NEWS
Ross McCrorie, Tom Naylor and Sean Raggett are all available again for Pompey after returning to full training.

Jack Whatmough has also recovered from a knee injury, but is not yet ready to be considered for selection.

It leaves midfielder Bryn Morris (groin) as the only member of the Blues squad currently out of action.

Northampton played on Sunday and, like Pompey, are likely to make plenty of changes to their side.

VIEW FROM THE DRESSING ROOM
Read the thoughts of Kenny Jackett and Leon Maloney or register for a free iFollow account to watch the below video. 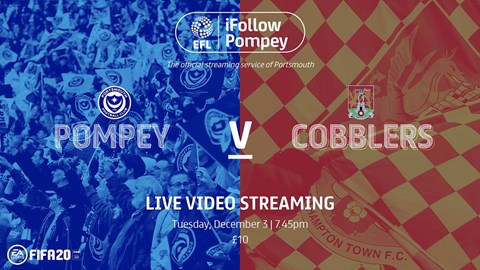 BETTING
Pompey are the 1/2 favourites with Sky Bet to progress inside 90 minutes, while the visitors can be backed at 9/2. 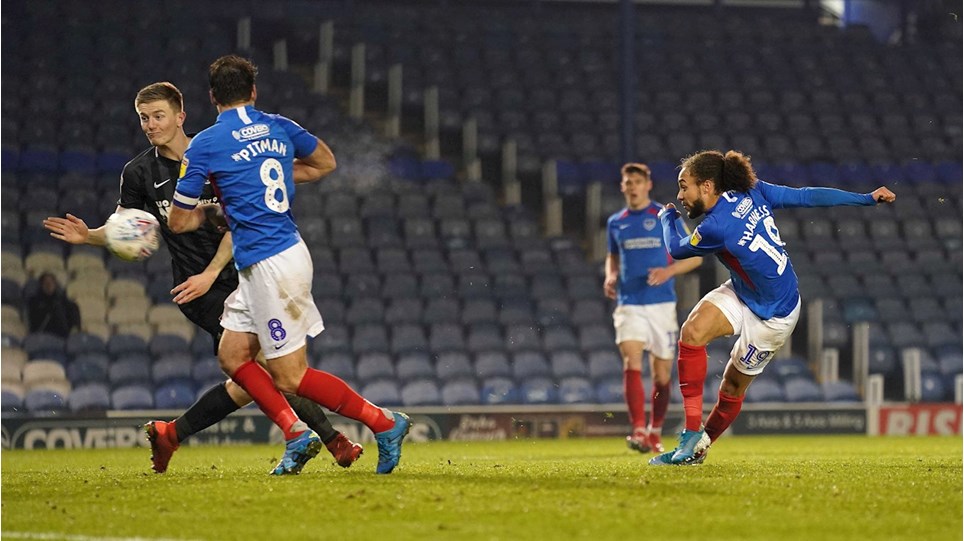 
A second round Leasing.com Trophy tie against Northampton is probably not a game that will live long in the memory for many. Jackett: We Dominated After Slow Start


A slow start was perhaps to be expected with Pompey making nine changes to their starting line-up against Northampton.

A much-changed Pompey side battled from behind to beat Northampton and book their place in the third round of the Leasing.com Trophy.

They got off to a poor start and Michael Harriman soon put the League Two side into the lead at a chilly Fratton Park.

But Leon Maloney’s first senior goal levelled the tie before the break and a stunning Marcus Harness strike proved to be the winner.

Kenny Jackett made nine changes from the side that beat Altrincham to progress in the FA Cup at the weekend.

Anton Walkes – who moved to left-back – and Harness were the only players to keep their place in the starting line-up.

Brett Pitman skippered the team up front, with Gareth Evans and Maloney also returning to the forward line.

A fit-again Ross McCrorie featured alongside Andy Cannon in midfield, with James Bolton, Paul Downing and Sean Raggett in defence, and Alex Bass between the sticks.

But Northampton did go ahead on 12 minutes, with Harriman left unmarked to convert Joe Martin’s cross from a few yards out.

Pompey did grow into the contest, though, and Evans drew a smart stop from Steve Arnold after collecting Harness’ pass and cutting onto his left foot.

Jordan Turnbull then did well to divert McCrorie’s drive behind following a threatening run from the Scotland under-21 skipper.

And when the same player was brought down on the edge of the box, Harness’ free-kick was just too high for Downing at the back post.

The equaliser did arrive on 39 minutes and it was a moment to remember for MALONEY, who bravely stooped to head home another Harness delivery and open his Pompey account.

A coming together between Martin and Bolton led to pushing and shoving by the South Stand touchline late in the first half.

Referee Will Finnie eventually managed to calm the pair down and showed both players a yellow card.

There was an early chance for the Blues once the action restarted, with Pitman’s header clawed away by Arnold.

Warburton then tried his luck from long-range at the other end, but the ball flew straight into the arms of Bass.

The keeper made a much better save soon after, getting down to keep out Billy Waters’ firm strike after the substitute had been sent through on goal.

Both sides looked capable of taking the lead and Pitman went close with a couple of headers just a minute apart.

He probably should have done better with the first, sending the ball wide from close-range, but the second was a clever effort from further out that looped narrowly over.

Pompey were suddenly looking a real threat and it came as no surprise when they went ahead just past the hour mark.

It was a stunning volleyed finish from HARNESS that thundered into the net after an Evans cross was cleared into his path.

Jackett immediately made a double change, with Maloney and McCrorie making way for John Marquis and Brandon Haunstrup.

And the Blues almost increased their advantage moments later, with Arnold getting down to brilliantly save Pitman’s downwards header.

The skipper certainly deserved a goal for his all-round play and soon bent another shot around the post after being teed-up by the influential Harness.

The action started to wind down as the finish line neared, although a lashed effort from Bolton took a deflection and flew just past the post.

Arnold then kept his side in the contest with a superb save to deny Marquis from point-blank range after Haunstrup had slipped the ball across the box.

Injuries and substitutions meant there were six minutes of stoppage-time to negoatiate, but the Blues saw the game out with ease to secure their place in Thursday evening's third round draw.


A second round Leasing.com Trophy tie against Northampton is probably not a game that will live long in the memory for many.

Jackett: We Dominated After Slow Start


A slow start was perhaps to be expected with Pompey making nine changes to their starting line-up against Northampton.