It was only seven weeks ago that Pompey last made the long trip to the Fylde coast to take on Fleetwood.

They won 2-1 that day – courtesy of goals from James Bolton and John Marquis – to reach the fourth round of the FA Cup.

But now it is League One points on the line, as two teams in the hunt for promotion meet at Highbury Stadium.

The Cod Army are just two points – and the same number of places – behind the Blues in eighth position.

And Joey Barton’s men will enter the contest on the back of a four-match winning streak that includes the scalps of high-flying Wycombe and Peterborough.

That in turn followed a more concerning run of eight games that contained plenty of draws, but no victories.

Town are looking to secure Championship football for the first time, having been competing in the Northern Premier League as recently as 2008.

The sides will do battle again at Fratton Park in a little over a fortnight – a contest that was postponed by Fleetwood in November because of international call-ups.

TEAM NEWS
Kenny Jackett is hoping to have Andy Cannon (glute) and Ellis Harrison (leg) available for selection this weekend.

But Bryn Morris is not yet ready for first team action, having recently returned to training following a long-term groin problem.

The hosts will also be without Kyle Dempsey (back) and Jordan Rossiter (knee), who are both suffering with long-term injuries.

VIEW FROM THE DRESSING ROOM
Read the thoughts of Kenny Jackett and Steve Seddon or register for a free iFollow account to watch the below video.

TICKETS
Pompey fans can pay on the day at the Fleetwood ticket office, with collections from the booth outside the club shop.

BETTING
Pompey and Fleetwood are both available at 13/8 to win on Saturday with Sky Bet, with the draw at 21/10. 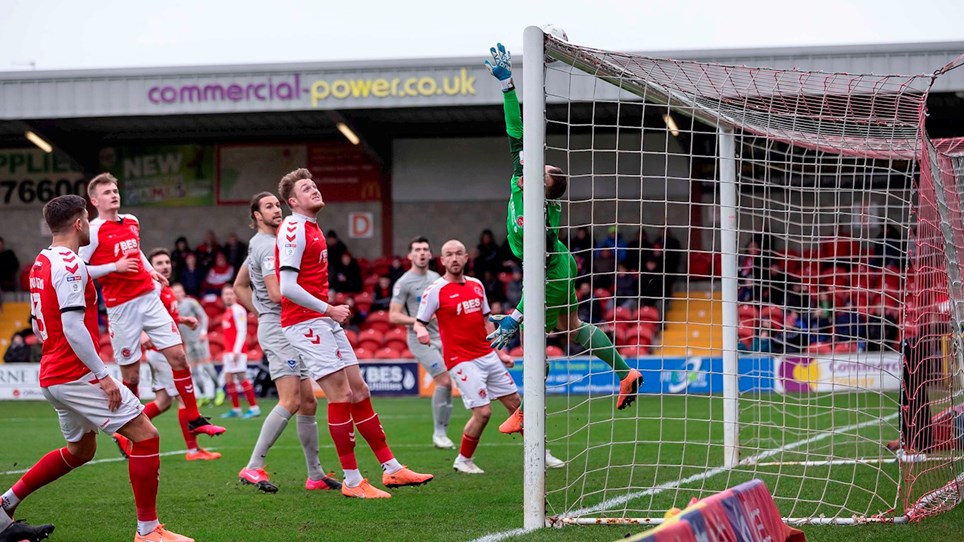 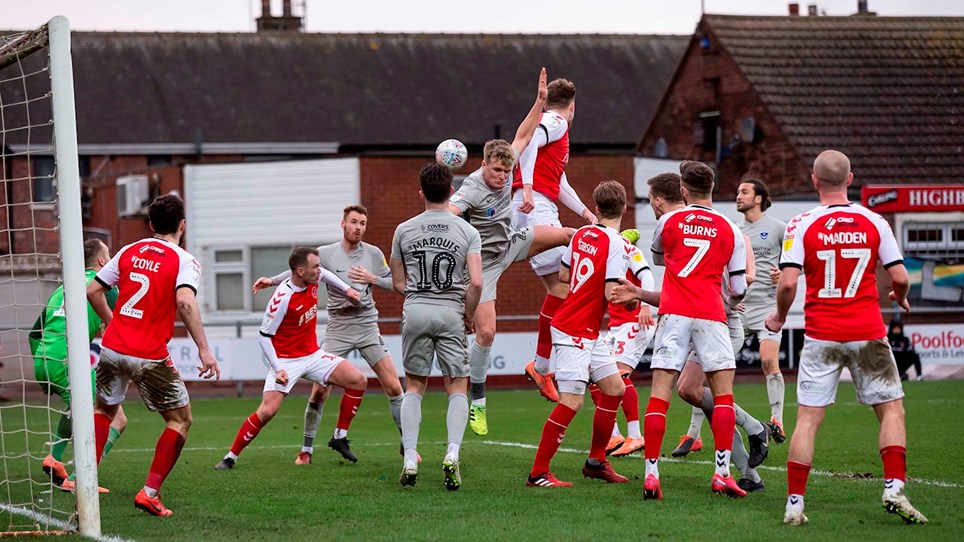 
Pompey fell outside of League One's top six after being narrowly beaten at Fleetwood. 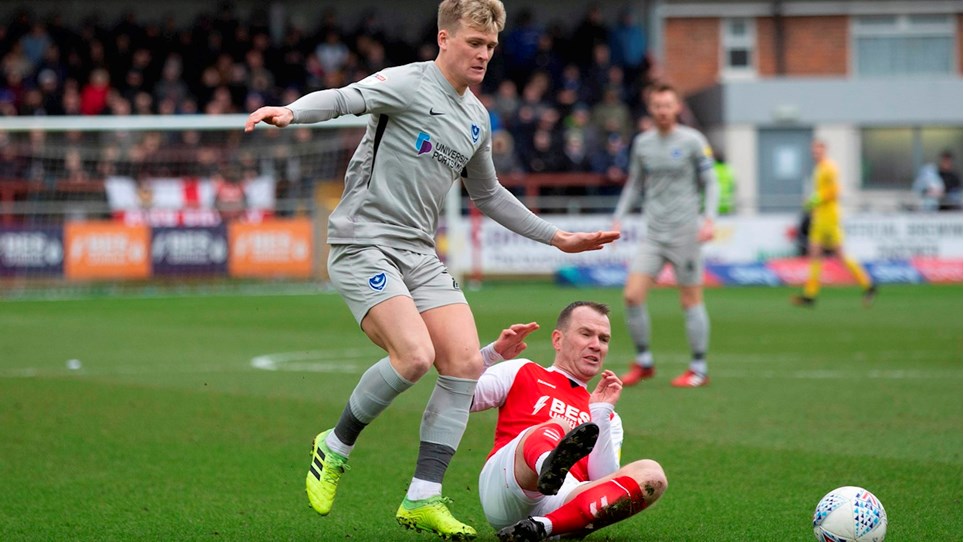 
Pompey’s promotion charge took a dent with a narrow defeat to Fleetwood at Highbury Stadium. Pompey dropped out of the top six after suffering a narrow defeat to Fleetwood on the windswept Fylde coast.

An early goal from Callum Connolly settled a contest that saw the conditions dictate the level of quality on display.

Ronan Curtis struck the woodwork and Sean Raggett’s header was cleared from the line, but the Blues were unable to find a leveller.

Kenny Jackett had to make a late change to his line-up, with Ellis Harrison originally included in the side.

But he was still feeling his dead leg in the warm-up and was switched for Oli Hawkins, which in turn opened up a place on the bench for Gareth Evans.

There were two other changes from the side that dramatically beat Exeter to reach the Leasing.com Trophy earlier in the week.

John Marquis was rewarded for his last-gasp winner, while James Bolton came in at right-back, as Ben Close and Ross McCrorie dropped to the bench.

There was driving rain and hail before kick-off, although that had thankfully passed by the time the players emerged from the tunnel.

But there was still a strong wind blowing around Highbury and it was clearly making life difficult for both sides.

Pompey were first to threaten and Lewie Coyle slid in to clear before Curtis could meet a low Marquis centre.

It was the hosts who broke the deadlock on 12 minutes, though, with Connolly left in too much space to nod home after Alex Bass had parried away Danny Andrew’s cross.

There was soon some more sloppy play from the Blues to give away possession in the middle of the pitch.

Barrie McKay collected the ball and laid it off for the rampaging Wes Burns, who could only drill past the post.

Pompey then came close to a wind-assisted leveller when Curtis’ wide free-kick drifted towards goal and rattled the crossbar.

A couple of Paul Coutts corners caused problems at the other end, with Christian Burgess nodding the first behind and Bass then punching the second in the air before catching the ball.

The keeper then made sure he got right behind a long-range effort from Paddy Madden to gather cleanly.

There were not an abundance of clear-cut chances, with the conditions certainly having an affect on the quality on show.

But Fleetwood breathed a sigh of relief when Curtis beat Alex Cairns to Steve Seddon’s pass down the line and with the keeper stranded, the ball would not fall kindly for a grey-shirted player.

There was time for a booking for Harry Souttar just before the break, with the defender petulantly throwing the ball away to stop the visitors taking a throw.

There was no let-up in the wind by the time the action restarted, with Tom Naylor having to gather some paperwork from the visitors’ dug-out that had blown onto the pitch.

It was certainly not helping the game as a spectacle, with any kind of rhythm absent from both teams’ play.

There was a shot from outside the box by Marquis on 55 minutes, although he could only scuff it wide.

Jackett soon made a double switch to try to improve Pompey’s fortunes, as McCrorie and Ryan Williams replaced James Bolton and Hawkins.

And when McCrorie played a deep pass into the box, the ball was volleyed narrowly past the post by the lively Curtis.

That came just a few seconds after Bass had got down to his right to make a regulation stop from Paddy Madden’s drive.

He had to make a smarter stop to deny Burns, diving the opposite way to parry clear a shot that swerved in the wind.

Pompey were being frustrated by their well-drilled opponents, although a leveller almost arrived on 73 minutes.

Curtis was the provider of a dangerous corner that was met by Raggett’s firm header, which was cleared from the line by Coyle.

Seddon then had an attempt from inside the box blocked, as Fleetwood continued to stand firm at the back.

There might have been a goal at the other end when Curtis’ cross-field pass was intercepted, but Josh Morris drilled wide after racing clear.

Raggett was deployed as an emergency striker in an attempt to find an equaliser, but tempers were getting frayed and the referee had to deal with some pushing and shoving.

When that finally calmed down, the Cod Army held on through five minutes of stoppage-time to claim all three points.


Pompey fell outside of League One's top six after being narrowly beaten at Fleetwood.


Pompey’s promotion charge took a dent with a narrow defeat to Fleetwood at Highbury Stadium.

Tickets for Pompey’s League One trip to Fleetwood go on sale next week.

Blues fans have been given an allocation of 1,100 tickets for the Highbury Stadium contest on Saturday, February 22 (3pm kick-off).

Pompey have already won once at Highbury this season, with goals from James Bolton and John Marquis securing a 2-1 victory in the FA Cup earlier in the month.