The action is unrelenting as Pompey continue their quest for League One promotion by hosting Rochdale this evening.

It is the second of three Fratton fixtures in six days for Kenny Jackett’s troops, who beat MK Dons on Tuesday night and face Arsenal in the FA Cup on Monday.

The home faithful know that they would climb up to third spot with a victory, having already reached a season-high position of fifth.

Their opponents are more concerned with events at the other end of the table and sit just a couple of places above the drop zone.

But there is a relatively healthy gap of seven points separating Rochdale from Tranmere, who are the team just underneath that dreaded dotted line.

Brian Barry-Murphy’s men have secured a solitary win from their past seven league games and head south on the back of successive defeats to Sunderland and Coventry.

It was Pompey who took the points when the sides met at Spotland back in November, courtesy of Ronan Curtis’ brace and an account-opening goal from Ryan Williams.

In fact, the Blues have triumphed in each of the past four clashes, which includes a 4-1 rout at Fratton Park last term.

TEAM NEWS
Kenny Jackett is hoping to have Ellis Harrison available again, with the striker returning to training after recovering from a dead leg.

Andy Cannon made his comeback on Tuesday following a glute problem and will want to keep his spot in the team against his former club.

Meanwhile, Bryn Morris is continuing on his path back from a long-term abdominal problem and could soon be taking part in full training.

Callum Camps returned from injury in Rochdale’s defeat to Coventry last week, while Ollie Rathbone will be aiming to make his comeback at Fratton Park. 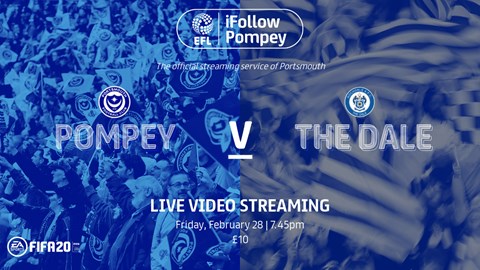 BETTING
Pompey are the 2/5 favourites with Sky Bet to secure all three points, while the visitors are available at 13/2. 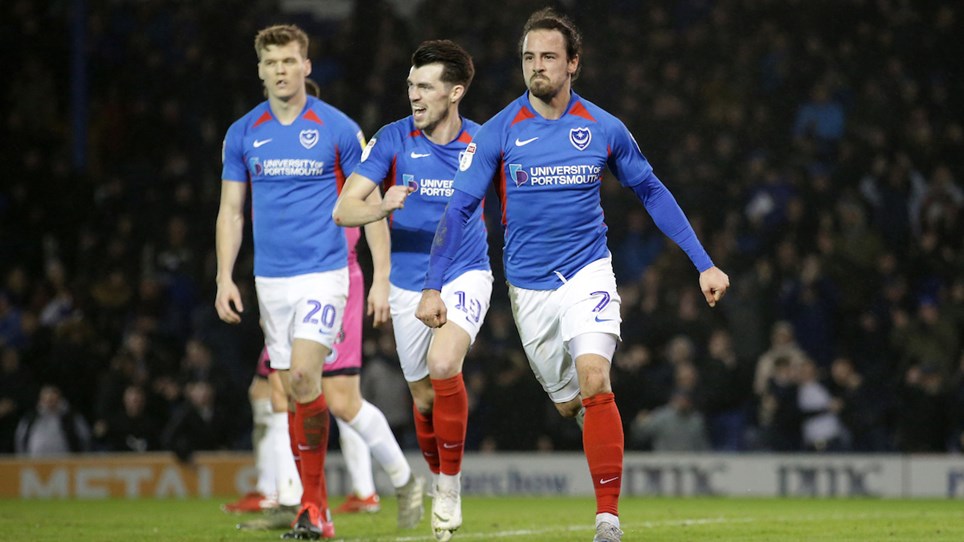 
It had been a first half devoid of any real excitement at a wet and gusty Fratton Park. 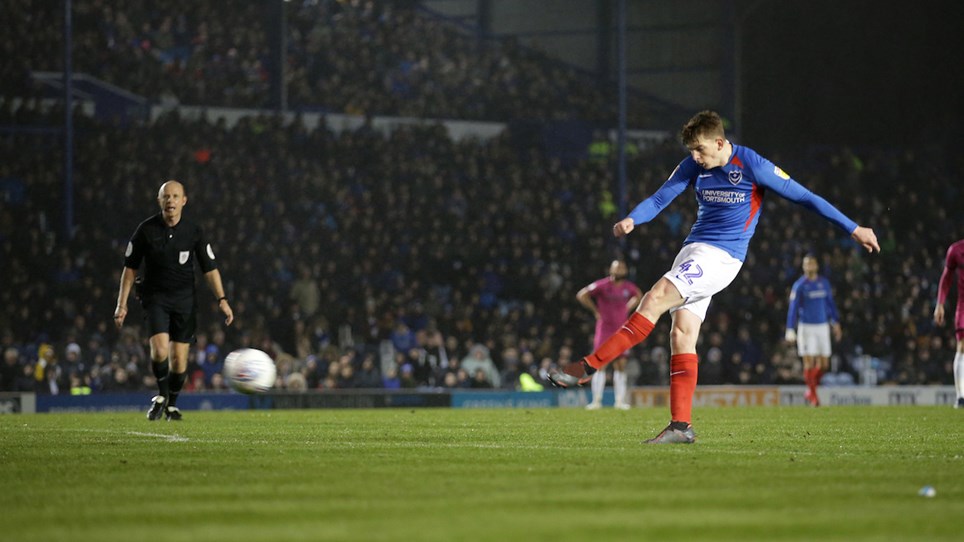 
Pompey enjoyed their Friday night under the lights by seeing off Rochdale at Fratton Park. 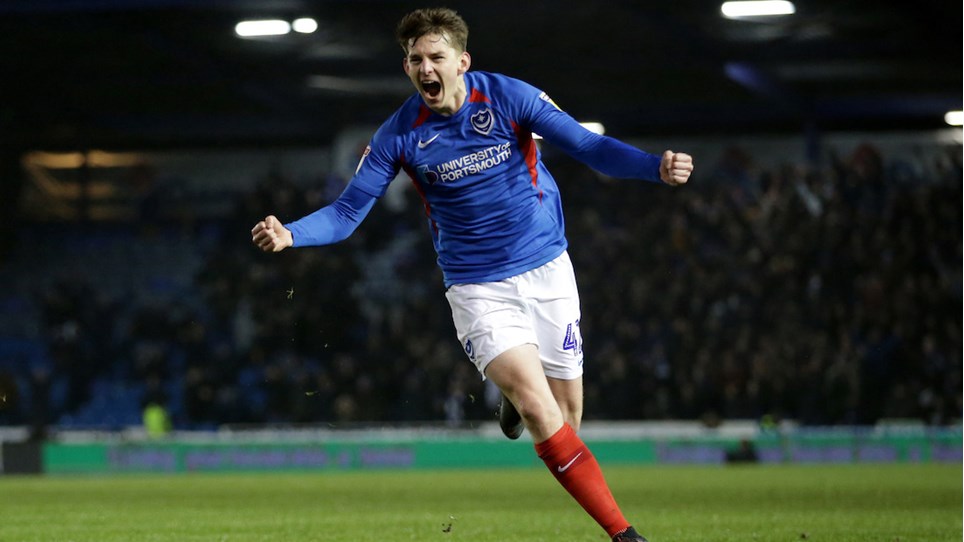 
He started the game sat on the bench, but left the pitch having scored the goal of the night against Rochdale.

Pompey breezed past Rochdale to continue their fine Fratton form and climb up to third in the League One table.

There was little to excite the crowd on a cold, wet and windy evening on the south coast for the first 44 minutes.

But Ryan Williams swept home the opener just before the interval and the Blues were largely dominant in the second half.

Steve Seddon came off the bench to impressively fire home his first goal for the club, while Christian Burgess wrapped things up with a late header.

Kenny Jackett made two changes from the side that beat MK Dons – also on home soil – earlier in the week.

James Bolton returned at right-back and Cameron McGeehan in midfield, as Ross McCrorie and Ben Close both dropped to the bench.

They were joined there by Ellis Harrison, who had reached full fitness after missing a couple of games with a dead leg.

The majority of the first half was a pretty dull and uneventful affair, with neither keeper being properly forced into action.

Corners from both Ronan Curtis and Lee Brown drifted towards the net – perhaps assisted by the wind – but were dealt with.

Williams then tried a curling effort from long-range that flew not too far off target, although never really concerned Robert Sanchez in the Dale goal.

Skipper Ian Henderson should then have done better at the other end, but after being sent through on goal, could only chip a tame effort straight into the arms of Alex Bass.

Half-chances were the order of the evening and Matty Lund’s attempt flew high into the Fratton End, while Andy Cannon – playing against his former club – also cleared the crossbar.

But the game suddenly sprung into life in the final moments of the first half, starting with Rhys Norrington-Davies being booked for a foul on Williams.

He injured himself in the process and had to be replaced in the Rochdale defence by Jimmy Keohane.

Pompey took the lead before that substitution could take place, however, with Burgess meeting a Curtis cross.

His firm header was scrambled away by Sanchez, but WILLIAMS was on hand to lash the loose ball into the roof of the net.

It looked like the advantage might be doubled in stoppage-time, with a goal-bound Cannon drive being diverted off target by a deflection.

Williams might have doubled the advantage shortly after the restart, but was unable to take advantage when Sanchez spilled Curtis’ cross.

And Henderson was then inches away from levelling at the other end, courtesy of a superb strike that cannoned against the corner of post and bar.

There was a blow for the Blues when Burgess went into the book for the 10th time this term, resulting in a two-match league ban.

Jackett decided the time was right for a double change on 54 minutes, as Brown and Cannon were replaced by Seddon and Close.

The hosts were trying to find a second goal and Marquis could not beat Sanchez following some sloppy Rochdale play, while the keeper then claimed McGeehan’s looping header.

And Williams sent a teasing cross into the box from wide on the right that a stretching Curtis could not quite guide on target.

Pompey were looking fairly comfortable, but it took a superb save from Bass to keep them ahead on 75 minutes, with the keeper tipping Matty Lund’s close-range header over the bar.

But they had a cushion a few minutes later and it was a fine strike from SEDDON that saw the advantage doubled.

Bolton’s cross was laid into the path of the on-loan left-back, who hit a superb 20-yard effort that swerved into the bottom corner.

But it was BURGESS who made the points safe just a few seconds later, glancing home a fine right-sided free-kick from Seddon.

There was almost another goal soon after, but Sanchez was off his line to save after Curtis had slipped a cute pass through to McGeehan.

Pompey were looking threatening with every attack, but Rochdale saw out the closing stages to limit the damage.


It had been a first half devoid of any real excitement at a wet and gusty Fratton Park.


Pompey enjoyed their Friday night under the lights by seeing off Rochdale at Fratton Park.


He started the game sat on the bench, but left the pitch having scored the goal of the night against Rochdale.