It is a fixture that was played an incredible five times last season and there was very little to separate the sides.

Pompey’s highlight was their Wembley triumph in the EFL Trophy final, while Sunderland edged a tense play-off encounter.

And – just like last term – both sides are now firmly focused on the battle to win promotion to the Championship.

Kenny Jackett’s men climbed into the top six for the first time with victory at Lincoln on Tuesday evening, only to be pushed back out by the Black Cats 24 hours later.

The Wearsiders dismissed manager Jack Ross with the team occupying a play-off position in October and replacement Phil Parkinson was under pressure when they dropped as low as 15th.

But they have been in fine form in recent weeks and head to the south coast on a nine-match unbeaten run.

Unlike the Blues, Sunderland can also just focus on the league, having long since exited all the cup competitions.

They won 2-1 when the sides met in the north-east earlier in the campaign, battling from behind after Marcus Harness had opened the scoring. TEAM NEWS
Pompey have almost a fully-fit squad to choose from, with Bryn Morris (groin) the only player currently sidelined.

The visitors have recently allowed out-of-favour winger Aiden McGeady to join Charlton on loan for the remainder of the campaign.

There have also been rumours of plenty of incomings and outgoings at the Stadum of Light before the transfer window closes at 11pm.

VIEW FROM THE DRESSING ROOM
Read the thoughts of Kenny Jackett and Christian Burgess, as Pompey look to continue their unbeaten League One home record.

TICKETS
Fratton Park is full to capacity for Saturday’s game.

BETTING
Pompey are the 23/20 favourites with Sky Bet to secure all three points, while the visitors can be backed at 12/5. 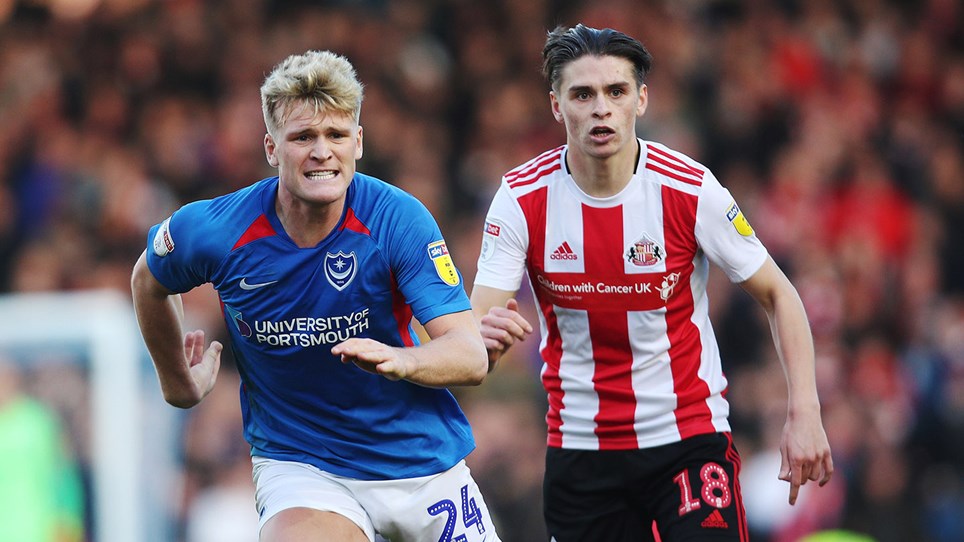 McGeehan: Blues Are On The Up


Cameron McGeehan has enjoyed a successful start to his Pompey career. 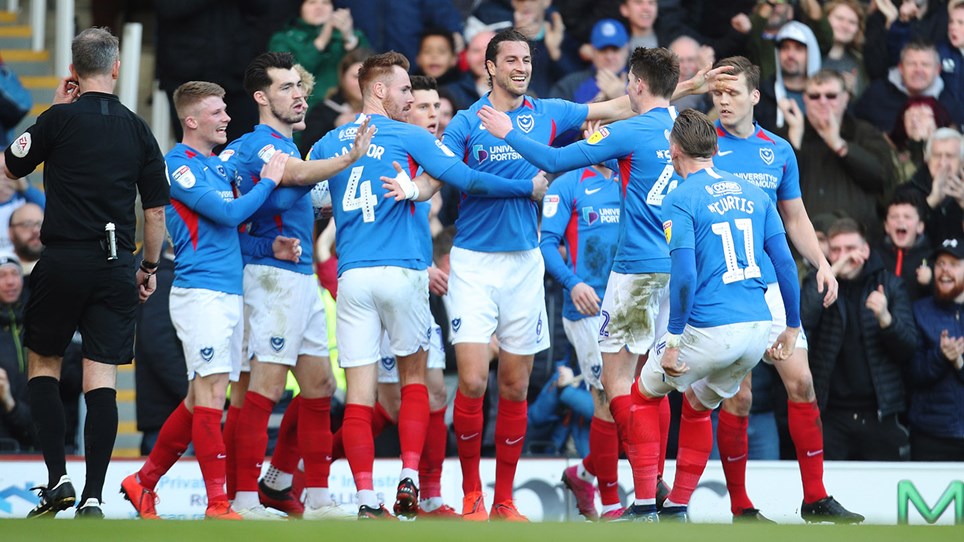 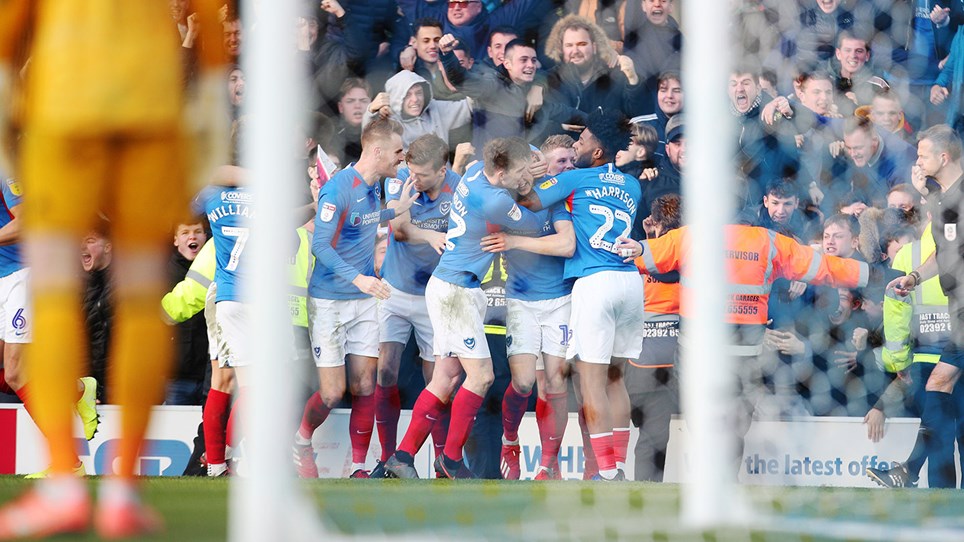 
Pompey beat Sunderland at Fratton Park to climb back into the League One play-off places. Jackett: We're In With A Shout


Pompey have been hovering just outside the top six for a number of weeks now.

Christian Burgess marked his 200th appearance with a goal, as Pompey won the battle of two in-form teams at Fratton Park.

It was Ronan Curtis who assisted his first half header, before then teeing-up James Bolton to secure all three points the break.

From the moment they took the lead, it was a dominant display from the Blues against their promotion rivals.

The Black Cats received a further blow late on when, having made the maximum number of substitutions, Joel Lynch was stretchered off the pitch.

Kenny Jackett made one change from the side that won at Lincoln earlier in the week to complete an unbeaten January.

The visitors made the faster start to the contest and Charlie Wyke did well to get a shot away after latching onto a ball down the left.

But Bass was able to keep out his effort and the keeper then leapt on the loose ball to deny a follow-up opportunity.

Pompey soon had a chance of their own at the other end, with Ryan Williams glancing a fine Curtis free-kick agonisingly past the post.

Again the action switched in what was proving to be an engrossing half of football and Hume cut the ball back for an unmarked Chris Maguire.

It looked as though the former Fratton loanee would score against his former club, only to screw his shot horribly, allowing Burgess to head clear.

The visitors were again left wondering how they had not taken the lead when Luke O’Nien’s fine effort hit the post and then ricocheted off the back of Bass before bouncing narrowly wide.

Instead it was Pompey who broke the deadlock on 25 minutes after Curtis had been fouled wide on the left.

He sent a superb delivery into the box and BURGESS was there to nod home and score for a third successive Saturday.

The lead was almost doubled a few minutes later when the ball bounced into John Marquis’ path and he hit a fierce effort just off target.

Steve Seddon’s set-piece was then headed back by Sean Raggett in a crowded box, but it was a Sunderland boot who got there first.

The Blues had been totally on top since taking the lead and they had two more great chances to score again in quick succession before the break.

First, Jon McLaughlin made a superb save when Curtis’ delivery took a wicked deflection off Bailey Wright and headed towards the net.

Andy Cannon then cut the ball back for Bolton, who miscued his close-range shot and saw the ball fly wide.

Tempers threatened to boil over in the final seconds of the first half after Bass beat Wyke to the ball and the striker tumbled over him.

The Black Cats wanted a penalty and referee Christopher Sarginson rightly waved away their appeals.

It led to an argument near the touchline and, when things settled down, both Lynden Gooch and Seddon were booked.

Jackett made a change at the start of the second half, with Ellis Harrison taking over from Marquis up front.

But it was Williams who soon had a chance to score a second for the Blues, meeting Bolton’s cross with a header that flew narrowly wide.

Instead it was another member of the back four who gave the hosts a welcome cushion on 52 minutes.

Curtis was the provider once more, whipping in a fine corner that BOLTON bundled home from a few yards out.

Pompey were threatening to run riot and when Curtis’ cross was nodded back by Williams, a Harrison header was kept out by McLaughlin from point-blank range.

Cannon’s follow-up attempt was blocked and the midfielder then teed-up Raggett, who fired wastefully past the post.

The Fratton faithful were enjoying themselves and jeered George Dobson when the midfielder swiped at thin air and conceded a throw.

It was pretty much one-way traffic, as the Blues continued to play with a real swagger, while their opponents offered little going forward.

And whenever the hosts did lose the ball, they were quickly gifted possession straight back again by the below-par Black Cats.

McLaughlin had to come out of his box to stop Harrison reaching Bolton’s clearance on 81 minutes and recovered to stop Williams following up.

He unfortunately collided with Lynch in the process, though, and the defender received lengthy treatment on the pitch before being stretchered off.

All four sides of Fratton Park rose to applaud the stricken player, but Sunderland had already made all three changes and had to finish the game with 10 men.

It meant there were nine minutes of injury-time for Pompey to negotiate, but they looked more likely to add to the scoring.

McLaughlin made another fine save to keep out Harrison’s swerving shot, as the Blues comfortably saw the contest out.

McGeehan: Blues Are On The Up


Cameron McGeehan has enjoyed a successful start to his Pompey career.


Pompey beat Sunderland at Fratton Park to climb back into the League One play-off places.

Jackett: We're In With A Shout


Pompey have been hovering just outside the top six for a number of weeks now.