Pompey switch their focus back to the League One promotion race after progressing in two other competitions over the past week.

Kenny Jackett’s side have home ties against Barnsley and Scunthorpe in the FA Cup and Leasing.com Trophy to look forward to later this month.

But it is the quest to climb the table that takes centre stage on Saturday, as AFC Wimbledon head to Fratton Park.

The Blues are just one point outside the play-off spots with half their fixtures remaining – and only six adrift of second position.

Their opponents, meanwhile, are more concerned with events at the other end of the division and trying to pull away from the danger zone.

Glyn Hodges is the man tasked with trying to avoid taking the battle to beat the drop to the final day for a second successive season.

He began the campaign as assistant manager, but took the top job after Wally Downes was charged by The FA for a breach of betting regulations.

Pompey were narrowly beaten when they visited Kingsmeadow back in October, courtesy of a last-gasp goal from Terell Thomas. 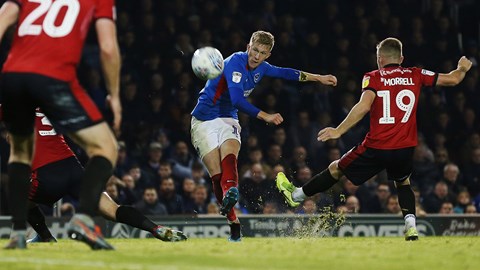 TEAM NEWS
Cameron McGeehan could be handed his Pompey debut after completing a loan switch from Barnsley earlier in the week.

Brandon Haunstrup (meniscus) and Jack Whatmough (knee) are both back in training, but not ready to feature on Saturday.

TICKETS
Pompey fans can secure seats online here. Subject to availability they will also be available to buy from both ticket offices from 9am on Saturday.

BETTING
Pompey are the 4/9 favourites with Sky Bet to secure all three points, while the visitors can be backed at 11/2. 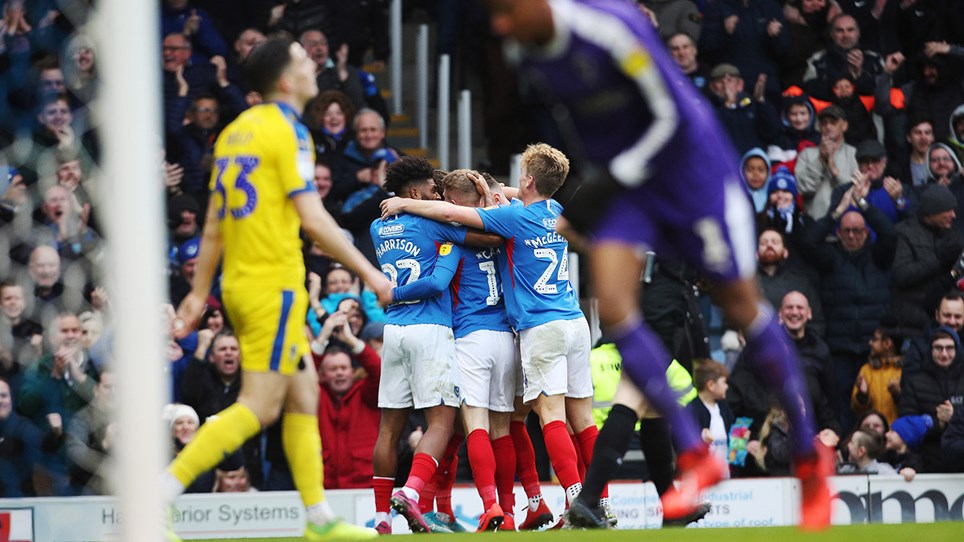 
Pompey moved to the brink of the play-off places after beating AFC Wimbledon.

Three Is The Magic Number

Pompey beat AFC Wimbledon to ensure the first Fratton fixture of the new decade was one to celebrate.

They dominated for much of the contest and Marcus Harness’ fine finish ensured the Blues deservedly led at the break.

Joe Pigott levelled in the second half, but John Marquis came off the bench to put the hosts back into the lead.

And the Dons had to see out the closing stages with just 10 men after substitute Scott Wagstaff was dismissed for two bookable offences in quick succession.

Kenny Jackett made three changes from the side that drew at Gillingham in the last League One outing.

Cameron McGeehan came straight into the starting line-up after completing his loan switch from Barnsley earlier in the week.

Fellow January arrival Steve Seddon also made his Fratton bow, while Andy Cannon was the other player to return.

Ben Close and Gareth Evans both dropped to the bench, with Anton Walkes having departed for America.

There was also a welcome return to the bench for Jack Whatmough after almost a year out with a knee injury.

The first half was a pretty one-sided affair – in favour of the hosts – although it did take a bit of time to get going.

And it was actually the Dons who were first to threaten when a corner found its way through to Rod McDonald, with the defender turning sharply and firing just past the post.

There was concern among the Fratton faithful when Harness went down with a knock and had to receive treatment on the pitch.

But the winger was soon back up on his feet and, just a few moments later, gave the Blues a deserved lead.

It was a quick move through the middle that began with Sean Raggett stepping up confidently to win the ball.

He slipped a neat pass through to Cannon, who burst forward and laid the ball off for HARNESS to lash into the net.

Pompey continued to dominate possession and enjoy territorial advantage as the action progressed, although more clear-cut chances were eluding them.

Harness was looking the most dangerous attacking player and dragged one effort wide, then hit a dipping long-range shot over the bar.

AFC Wimbledon, meanwhile, lost one of their key men, as striker Marcus Forss pulled up while chasing the ball and limped down the tunnel.

It was the hosts still looking more likely to add to the scoring and Terell Thomas bravely blocked strikes from McGeehan and Harness in quick succession.

A Ronan Curtis corner was then weakly punched by Nathan Trott and there was panic in the Dons defence before the ball was finally cleared.

The Republic of Ireland international also delivered a free-kick from the left that was headed back across goal by Raggett, with a stretching Harness not quite able to make a firm connection.

It was the Blues who had the first opening once the action restarted, as Harrison fed the ball to Curtis.

He took the ball into space and hit a fierce effort that Trott did well to divert over the bar, with the keeper then getting to Seddon’s corner before Christian Burgess could connect.

There was also a flag-kick for the Dons that a sliding McDonald could only turn into the side netting at the far post.

But it had been a quiet afternoon for Alex Bass between the sticks, so it was somewhat of a surprise when the visitors levelled just past the hour mark.

Pompey were caught out at the back by a quick break and Mitch Pinnock delivered a fine cross for Pigott to convert from close range.

That gave the Londoners a lift and Bass had to claim Pigott’s looping header from Nesta Guinness-Walker’s centre.

Jackett responded with a double switch, as Marquis and a fit-again Brandon Haunstrup replaced Cannon and James Bolton.

And it was the former who restored the home side’s lead on 79 minutes to get Fratton rocking once more.

Harness picked out Curtis with a cross-field pass and the winger’s superb cross was deftly headed home by MARQUIS.

It soon got even worse for the Dons, as Wagstaff – who had only been on the pitch for 13 minutes – fouled Seddon to collect his second booking.

They still tried to apply some late pressure in the search of another equaliser, but Pompey saw out five minutes of stoppage-time.

And they probably should have given the scoreline a gloss, but Marquis could not beat Trott after being sent racing clear.


Pompey moved to the brink of the play-off places after beating AFC Wimbledon.

Three Is The Magic Number