Pompey will look to progress in a second cup competition in the space of a few days when they visit Walsall this evening.

Having seen off Fleetwood in the FA Cup at the weekend, they now continue their defence of the Leasing.com Trophy with a third round tie at the Bescot Stadium.

Kenny Jackett’s holders beat Northampton on home soil in the opening knockout round, while their opponents came from two goals down to defeat Chelsea’s youngsters.

The Saddlers have never won this competition – in any of its guises – but did reach the final back in 2015.

Darrell Clarke is currently in charge at the Bescot Stadium, having taken charge following the club’s relegation to League Two at the end of last season.

They had a tough start to the campaign, but have found more consistency in the past couple of months.

Walsall are currently sitting in 11th position, although are still eight points adrift of the play-off spots.

Pompey won 3-2 when the sides met in the midlands for a league contest last March, with goals from Brett Pitman, Omar Bogle and Viv Solomon-Otabor.

Brandon Haunstrup has returned to training following an operation on his meniscus, but tonight’s game comes too soon for the left-back.

Walsall boss Darrell Clarke has said that some of his squad are ‘running on empty’ following the hectic festive programme.

VIEW FROM THE DRESSING ROOM
Read the thoughts of assistant manager Joe Gallen or register for a free iFollow account to watch the below video.

Domestic subscribers will, as usual, be able to listen to listen to live commentary from Ian Wilding and Guy Whittingham by signing into their account and visiting the match centre from 7pm.

BETTING
Pompey are the evens favourites with Sky Bet to progress after 90 minutes, while the hosts can be backed at 21/10. 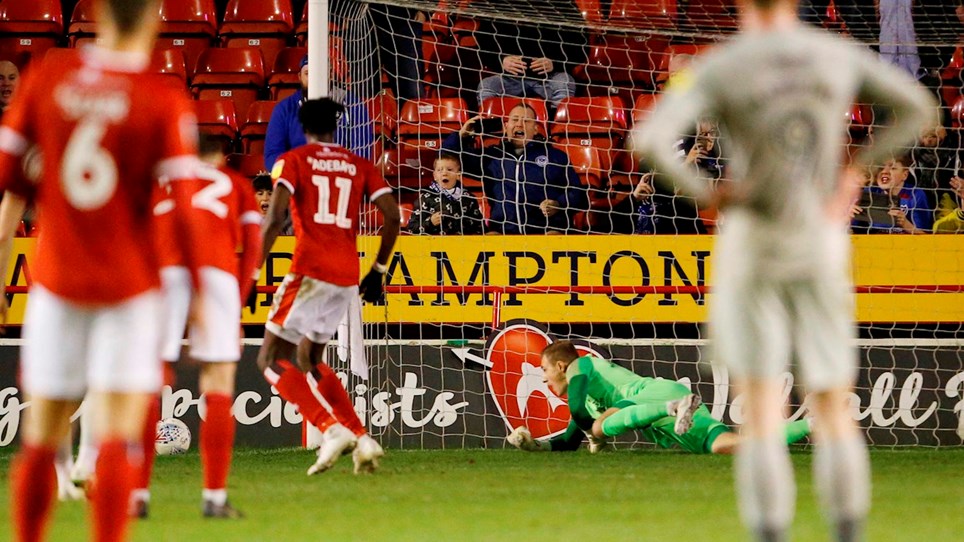 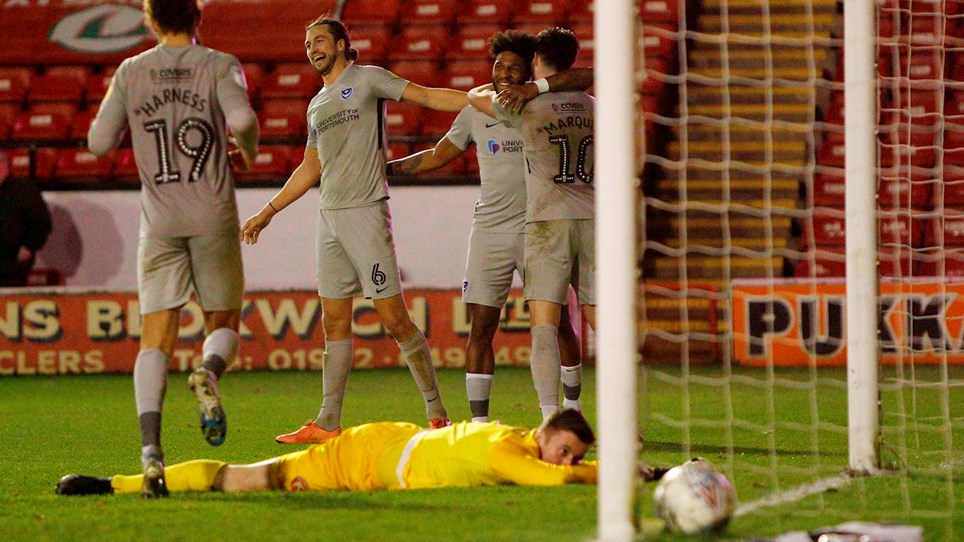 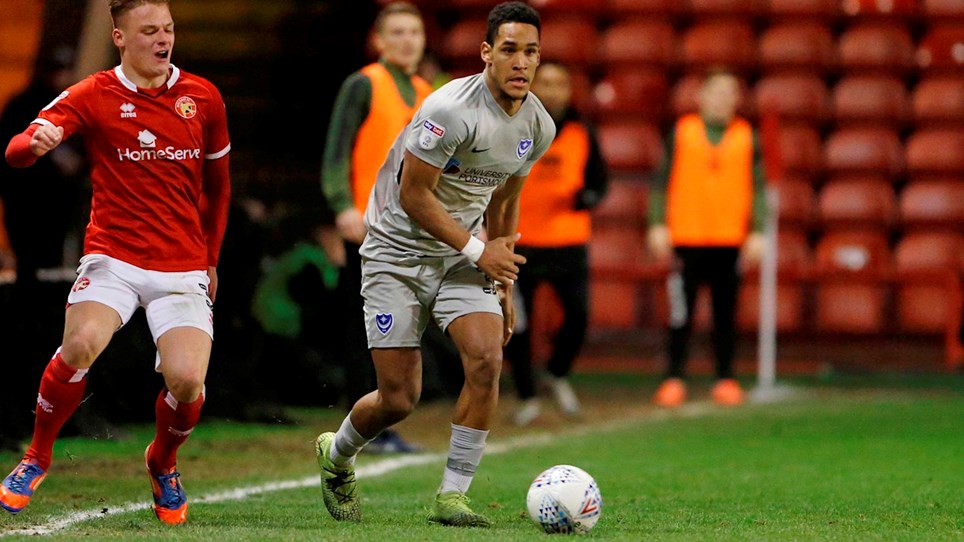 
Much of the focus ahead of kick-off was on how new signing Reeco Hackett-Fairchild would fare. by Neil Weld at the Bescot Stadium

Goals from John Marquis and Ellis Harrison ensured Pompey continued their defence of the Leasing.com Trophy with victory at Walsall in the third round.

Marquis opened the scoring in the first half with a goal that was remarkably similar to the one netted at Fleetwood on Saturday.

Elijah Adebayo should have levelled from the spot just before the interval, but saw his penalty well saved by Craig MacGillivray.

Ellis Harrison came off the bench to give the Blues a late cushion against their League Two opponents.

But the Saddlers were awarded another penalty that was converted by Caolan Lavery to ensure a nervy finale for the competition holders.

Kenny Jackett made seven changes from the side that progressed in the FA Cup with victory at Highbury Stadium.

Reeco Hackett-Fairchild came straight into the starting line-up after completing his transfer from Bromley the previous day.

Teenage defender Haji Mnoga made his first appearance of the season, while MacGillivray returned between the sticks.

The only players to keep their spot from the Highbury success were Christian Burgess – moved to left-back – Sean Raggett, Marcus Harness and Marquis.

It was a slow start to the contest played at a sparsely-populated Bescot Stadium, although there were eventually opportunities at both ends.

The first decent chance fell to the Pompey forward, who swapped passes with Hawkins and saw a low drive kept out by Liam Roberts.

Adebayo was looking particularly dangerous for the hosts, but was unable to convert crosses from Cameron Norman and Cameron Pring

Roberts then denied Marquis again midway through the first half after Hawkins had provided a neat pass.

But the deadlock was broken from the resulting corner, which was whipped menacingly into the box by Evans.

Burgess met the ball at the far post and sent it arrowing towards the net, with MARQUIS on hand to slam it over the line from a few yards out.

There was an opportunity for Hawkins to double the lead, although he fired over after Marquis had laid off a fine Evans delivery.

It looked as though Hackett-Fairchild’s debut was going to come to a premature end on 36 minutes when he went down clutching his ankle.

The forward received treatment on the side of the pitch, but was eventually able to rejoin the action – and soon collected the first booking of the evening.

Referee Anthony Backhouse had no hesitation in pointing to the spot, although the Blues defender was adamant he had won the ball.

It mattered not, though, as MacGillivray got down low to his left to palm Adebayo’s penalty to safety.

The Saddlers also went close from the resulting corner, which saw James Clarke’s header cleared from the line and Backhouse ignoring handball appeals.

There was not a lot of goalmouth action to excite the crowd once the action restarted, with dangerous forays from both sides breaking down.

Long-range attempts from both Rory Holden and Burgess flew well off target, as the game drifted along.

But Mnoga showed good awareness to nip in and halt one Walsall attack, then embarked on a surging run that drew a foul.

The hosts made a double change on 56 minutes, with former Fratton loanee Lavery one of the men to make an entrance.

He soon tired his luck with an attempt from the edge of the area, only to see the ball bend out of play.

Jackett then made two changes of his own, as Hackett-Fairchild and Mnoga made way for Steve Seddon and Tom Naylor.

Clear-cut chances were still at a premium, although Roberts kept out a neat Hawkins flick from Seddon’s cross.

That was the striker’s last meaningful contribution to the contest, as he was replaced by Harrison for the final 20 minutes.

Some last-gasp defending saw Marquis and Evans denied in quick succession and from the resulting corner, Burgess thudded a header over.

The flag then stayed down when Lavery was sent racing through at the other end, but the striker blazed over the bar.

Pompey were looking the more threatening side as the game neared its conclusion, though, and the win was seemingly wrapped up on 82 minutes.

Seddon delivered a fine cross from the right and fellow substitute HARRISON nodded home to double the advantage.

But Walsall soon had a route back into the tie when Holden went down under Downing’s challenge and Backhouse again pointed to the spot.

This time it was Lavery who stepped up to take the penalty and he sent MacGillivray the wrong way to reduce the home side’s deficit.

That audibly lifted the home supporters, who sensed a comeback was on the cards, but the Blues held on to book their place in Thursday’s quarter-final draw.


Much of the focus ahead of kick-off was on how new signing Reeco Hackett-Fairchild would fare.