Pompey will aim to stretch their unbeaten run to four league matches when they visit AFC Wimbledon this weekend.

The word ‘struggling’ would likely have preceded the name of the hosts before their recent revival, although they still sit just inside the drop zone.

A dreadful opening saw the opening 11 fixtures fail to yield a single victory – 13 if you include games in all competitions.

But they head into Saturday’s Kingsmeadow contest on the back of successive League One victories over Rochdale and Southend.

Sandwiched between them was another triumph against Leyton Orient in the Leasing.com Trophy that keeps alive hopes of reaching the knockout stages.

That is despite manager Wally Downes being suspended after being charged with – and admitting to – betting on matches.

He has since been banned from all football-related activity until the middle of next month, with assistant Glyn Hodges running things in his absence.

Pompey came out on top in last season’s corresponding fixture, with Tom Naylor and Gareth Evans on target in a 2-1 victory. 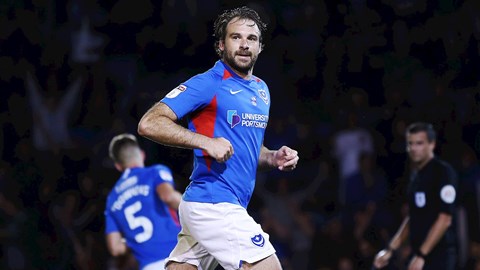 TEAM NEWS
Brett Pitman is a major doubt with a groin injury, while Oli Hawkins (foot), Bryn Morris (groin) and Jack Whatmough (knee) are definitely out.

Pompey can call upon the services of Craig MacGillivray and Ross McCrorie following their return from international duty.

Will Nightingale (hip) and Callum Reilly (groin) could miss out for the hosts, who currently have Rod McDonald (knee), Luke O’Neill (calf) and Adam Roscrow (thigh) sidelined.

TICKETS
Pompey fans have snapped up their entire allocation of tickets and no more will be made available.

Supporters collecting tickets at Kingsmeadow should visit the ticket office window next to the entrance for players and officials.

BETTING
Pompey are the 19/20 favourites with Sky Bet to secure all three points, while the hosts can be backed at 13/5. 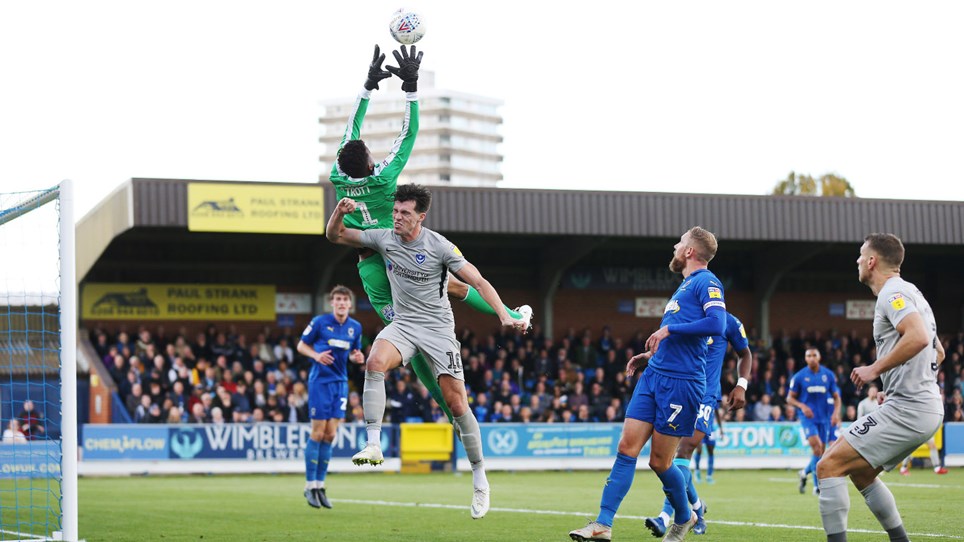 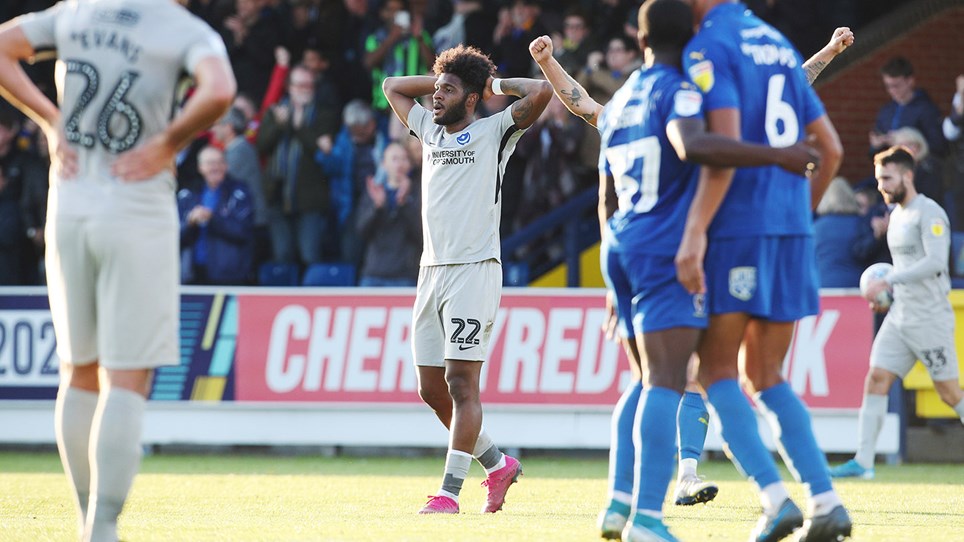 
Pompey were left to rue missed opportunities as they fell to a narrow defeat at AFC Wimbledon. 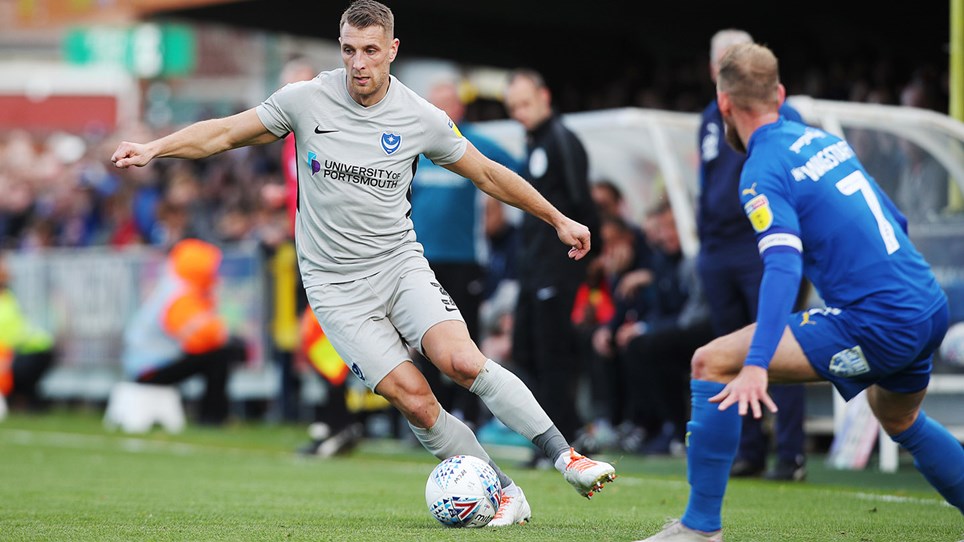 
There was frustration from the terraces as Pompey failed to break down AFC Wimbledon’s stubborn defence at Kingsmeadow.

by Neil Weld at Kingsmeadow

Pompey were dealt a late blow, as AFC Wimbledon scored a stoppage-time winner at Kingsmeadow to end their three-match unbeaten run.

Both sides had earlier chances to secure victory, with Christian Burgess and Anthony Wordsworth striking the woodwork.

It was the Blues who looked more dangerous, though, and Nathan Trott was kept busy between the sticks.

The points looked like being shared, only for Terell Thomas to head past Craig MacGillivray’s grasp right at the death.

It was a disappointing way for Gareth Evans to make his 200th appearance for the club – becoming just the third man to achieve that feat in the 21st century.

Kenny Jackett made three changes from the side that drew with Gillingham on home soil the previous week.

MacGillivray returned from international duty to replace Alex Bass between the sticks, while John Marquis came in for the injured Brett Pitman.

Ryan Williams also started out wide, as Pompey switched to a 4-2-3-1 system, with Ellis Harrison dropping to the bench.

Both sides looked dangerous on the break during an opening 45 minutes that saw play quickly switch from one end to the other.

The visitors had the first opportunity to break the deadlock, although Marcus Harness hit his effort into the turf and the ball bounced over.

Burgess then had to bravely fling himself into the path of a shot from the lively Marcus Forss to avert the danger.

Pompey were next to go close and after doing well to bring the ball down, Marquis prodded a shot past the post.

The see-saw nature continued with the Dons going close to breaking the deadlock on 13 minutes and it took a brilliant Lee Brown block to stop Forss.

A quick counter led to another Blues’ opening moment later, as Marquis collected Harness’ pass, held off his man and sent the ball rolling agonisingly wide.

Tom Naylor might have done better midway through the half after charging in to meet James Bolton’s dangerous delivery and heading over.

It was a bright period for the visitors and Burgess nodded against the crossbar after connecting with a Brown cross.

The danger was not over for Wimbledon, however, and Sean Raggett’s follow-up header was claimed by Trott.

There were a couple of bookings for Pompey and while Brown was right cautioned for fouling Scott Wagstaff, it was a harsh yellow for Marquis for simply standing his ground.

Bot sides had one more decent opportunity to forge ahead just before the break, with Trott getting down well to deny Evans.

Joe Pigott then spotted MacGillivray off his line and tried to lob him, only for the ball to fly narrowly wide.

It looked like the hosts had been awarded a penalty just after the restart when Pigott went down under Burgess’ challenge.

Referee Sam Purkiss seemed to point to the spot, only to eventually award a free-kick right on the edge of the box.

But it still almost led to a Wimbledon goal, as Forss hit a ferocious effort that flew through the wall and was superbly beaten away by MacGillivray.

Another free-kick for the Londoners was curled around the wall by Wordsworth, although it was easily dealt with by the Pompey stopper.

Jackett made a double switch just before the hour mark, as Williams and Marquis were withdrawn for Ronan Curtis and Harrison.

And the latter was almost gifted a bizarre goal moments later, charging down Trott’s clearance and seeing the ball ricochet just wide.

Harrison was proving a menace and after collecting Bolton’s ball into the box was unable to get enough on his header to trouble Trott.

Pompey had struck the woodwork before the break and it was the Dons’ turn on 65 minutes, with Wordsworth’s drilled effort cannoning back off the inside of the post.

Harrison then had two men on him as he tried to meet Bolton’s cross, but still managed to get a header away that was saved by Trott.

Some sloppy play at the back gave the Blues another opening, with Paul Kalambayi’s desperate block stopping Curtis’ shot testing the keeper.

The loose ball then came out to skipper Tom Naylor, whose drive was fierce, but straight at a grateful Trott.

Ben Close eyed up one of his special strikes from the edge of the box when a free-kick was only partially cleared, but the ball could not quite find its way through a sea of bodies.

Pompey were looking the more threatening side in the closing stages and Trott did well to smother Close’s low attempt.

Curtis then spun and curled a shot wide following good work from Brown, who managed to avoid a late Scott Wagstaff lunge that earned the Dons skipper a booking.

The display of four additional minutes gave travelling fans hope that their side could score a late winner.

But it was the Dons celebrating when, with just seconds remaining, Thomas glanced home Max Sanders’ free-kick.

It was harsh on Pompey and there was not enough time left for them to mount any more meaningful attacks.


Pompey were left to rue missed opportunities as they fell to a narrow defeat at AFC Wimbledon.


There was frustration from the terraces as Pompey failed to break down AFC Wimbledon’s stubborn defence at Kingsmeadow.

Tickets for Pompey’s League One match at AFC Wimbledon go on sale next week.

Blues fans have been allocated just 739 tickets for the League One contest on Saturday, October 19 (3pm kick-off).

The majority of these are on the RyGas Terrace, with a limited number of seats available in the John Green Stand.

Pompey will be using the loyalty points system to sell tickets for this game. Click here for more information.

Tickets will go on sale from 9am on each date. A further announcement will be made if tickets are still available after this period of sales.

Ambulant tickets are priced at the above rates and include a carer if on the highest rate of DLA or PIP.

Please note that the club have been given one wheelchair space, which has been allocated to an away season ticket holder.

One ticket can be bought per eligible Client ID Number.