The latest international break threatened to leave Pompey with yet another blank weekend in this stop-start season.

But the Blues made the decision to go ahead with Saturday’s fixture against Gillingham and try to build some more momentum.

Back-to-back victories over Bolton and Doncaster mean that Kenny Jackett’s side are slowly starting to climb the League One standings.

But they will be targeting higher than their current position of 16th, which is one place and one point behind this weekend’s Fratton visitors.

The Gills – who appointed Steve Evans as boss over the summer – have played two more matches than their hosts.

They enjoyed a relatively comfortable 3-1 victory over struggling Southend last Saturday, with former Pompey loanee Stuart O’Keefe among the scorers.

It was not a happy day for every member of the Kent outfit, however, as Mikael Ndjoli hit the post with one penalty and saw another saved.

They were, like the Blues, in Leasing.com Trophy action during the week, although a much-changed side were thrashed 4-0 at Ipswich.

Gillingham have yet to win on their travels so far this term, but have tasted success in each of their past two league visits to Fratton Park. 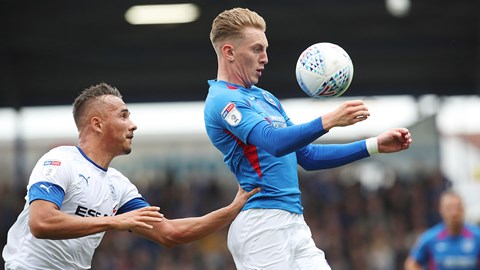 TEAM NEWS
Pompey are without first choice keeper Craig MacGillivray and midfielder Ross McCrorie, who are away on Scottish international duty.

Ronan Curtis withdrew from the Republic of Ireland squad with a tight hamstring, but has recovered and been given the green light to feature.

Tom Naylor and John Marquis have both recovered from knocks, with Oli Hawkins (foot), Bryn Morris (groin) and Jack Whatmough (knee) all sidelined.

Both sides are likely to make multiple changes after resting key players for Leasing.com Trophy matches during the week.

Subject to availability, they can also be bought from both ticket offices from 9am on Saturday.

BETTING
Pompey are the 4/6 favourites with Sky Bet to secure all three points, while the visitors can be backed at 18/5. Bass: Adrenaline Got Me Through


He was pretty much a spectator for much of Saturday’s contest at a wet Fratton Park. 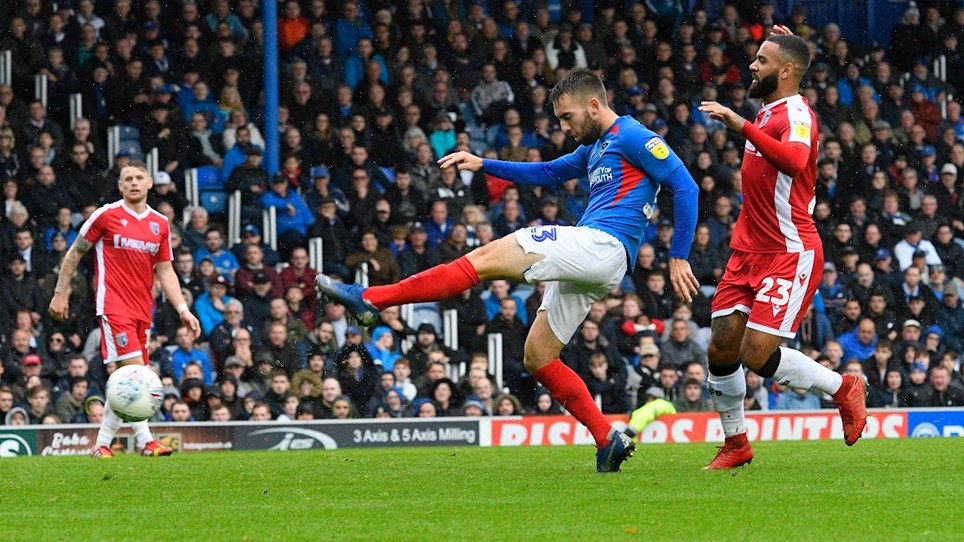 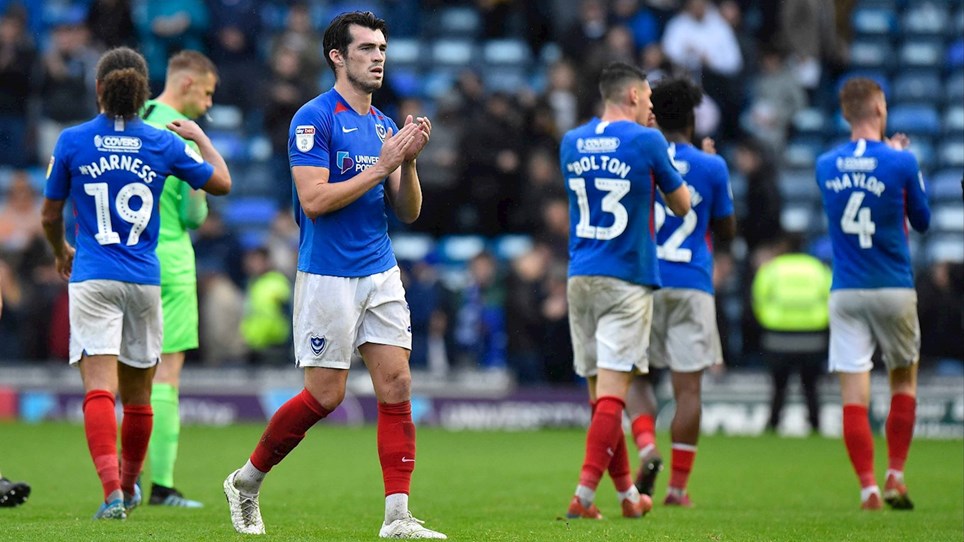 
Pompey had to settle for a point after failing to break down a solid Gillingham defence. 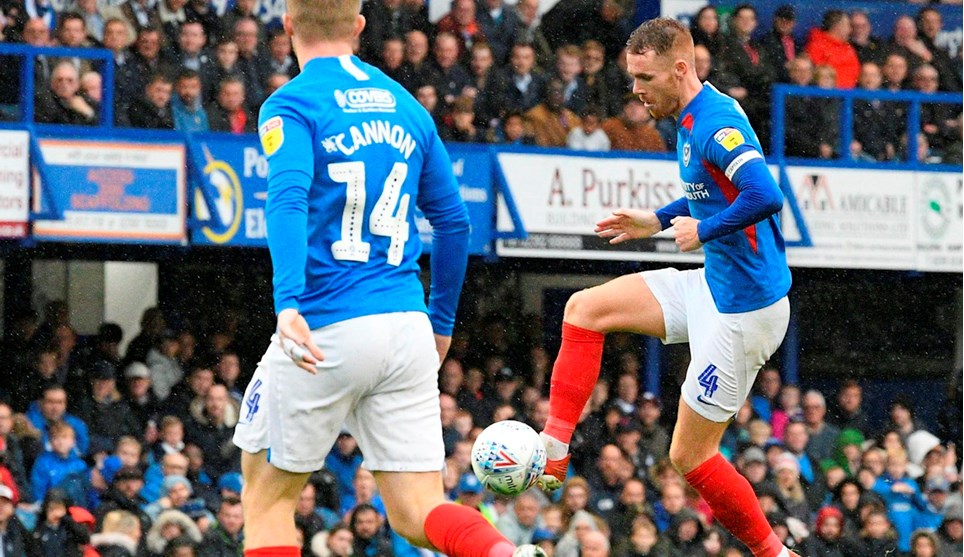 Naylor: We Faded After Positive Start


There were 82 minutes on the clock when Gillingham finally had their first shot on target at Fratton Park.

Pompey were left frustrated at a sodden Fratton Park after failing to break down a resilient Gillingham side.

They enjoyed the majority of possession and chances, with Sean Raggett heading against the woodwork.

But the visitors from Kent were able to hold on and limit the Blues to their third home stalemate of the season.

Ellis Harrison was rewarded for his dramatic late winner against Doncaster with a spot in the starting line-up.

He replaced John Marquis up front in one of two changes from the side that were victorious in south Yorkshire.

The other switch was enforced, with Alex Bass making his second league start for Pompey between the sticks, as Craig MacGillivray was away on international duty with Scotland.

It was a dominant display from the hosts before the break and they almost took the lead in just the second minute.

Gareth Evans stole possession and charged forward before unleashing a low, skiddy drive that Jack Bonham did well to turn around the post.

Another drilled attempt from Ben Close soon after was parried by the Gillingham stopper and Tom O’Connor had to hack clear with Harrison waiting to pounce.

A teasing left-footed delivery then fell just between Christian Burgess and Harrison, as Pompey continued to apply pressure.

Evans was next to go close midway through the first half with a free-kick from wide on the left that was dipping under the crossbar before Bonham’s late intervention.

There was nothing to trouble Bass at the other end of the pitch, as long-range attempts from Mark Byrne and Mikael Ndjoli flew well off target.

The Blues were looking much more likely to break the deadlock and their opponents were left breathing a sigh of relief on 34 minutes.

An Evans free-kick was met by Raggett’s firm header and appeared to be flying in, only for the ball to come back off the inside of the post and be hacked to safety.

There were bookings for both sides, as Lee Brown and Max Ehmer were punished for fouls, while former Fratton loanee Stuart O’Keefe saw yellow for dissent.

Meanwhile, the hosts were still proving a real threat, with half-chances for both Harrison and Close as the interval loomed.

They almost received a helping hand from Connor Ogilvie, who swiped at thin air while trying to deal with James Bolton’s cross and had to be rescued by Bonham.

It was Pompey who had the first opportunity to score after the break and Bonham got down to deal with Harrison’s effort.

Jackett made a change on 54 minutes and Pitman appeared to have collected a knock as he made way for Marquis.

Bass was still waiting to make his first save of the afternoon, although there was one nervy moment in the Blues box for the defence to deal with.

It was still the hosts seeing most of the ball and they were being left frustrated by a well-drilled opposition back-line.

Meanwhile, the Gillingham management team were constantly in the ear of the fourth official, drawing plenty of ire from the Fratton faithful.

Marquis tried to spin Ogilvie and race through on goal from Naylor’s long pass on 68 minutes, but a free-kick was awarded for a foul against the Gills centre-back.

And Brown then did well to beat his man on the left and charge into the box, only to follow it up by firing wide.

A double substitution soon followed for the hosts, as Close and Evans made way for Andy Cannon and Ryan Williams.

But chances were proving to be hard to come by and the visitors were doing their best to waste as much time as possible.

It had taken 82 minutes for Bass to have a save to make and he was not particularly troubled by Brandon Hanlan’s weak effort.

Pompey were the side trying hardest to turn one point into three and hopes were raised by the display of five additional minutes.

The winner almost arrived at the death when Williams’ cross dropped nicely for Brown, but he could only flash a shot wide.

And despite plenty of endeavour and application, they were unable to break down the red-shirted wall.

Bass: Adrenaline Got Me Through


He was pretty much a spectator for much of Saturday’s contest at a wet Fratton Park.


Pompey had to settle for a point after failing to break down a solid Gillingham defence.

Naylor: We Faded After Positive Start


There were 82 minutes on the clock when Gillingham finally had their first shot on target at Fratton Park.