Pompey are back under the lights and searching for a return to winning ways when they host Lincoln tonight.

It will be the first meeting between the sides since the last time they shared this division back in the 1982/83 season.

That campaign finished with the Blues claiming the title, while their opponents saw their own promotion challenge fade.

Not helping the Imps’ cause was two defeats to Pompey, including a 4-1 midweek reverse at Fratton Park, with Alan Biley hitting a hat-trick.

Lincoln have enjoyed two promotions in the space of just three seasons to get back to this level, guided by Danny Cowley and his brother Nicky.

But their departure to Huddersfield last month created an opening that was filled by former Blues boss Michael Appleton.

He watched from the stands as his new side were thrashed 6-0 at home to Oxford, but has since steadied the ship.

A home victory over Sunderland helped boost confidence, while the 12th-placed Imps played out a goalless draw with Shrewsbury on Friday night. TEAM NEWS
Brett Pitman is a major doubt for the hosts with a groin strain, while Oli Hawkins (foot), Bryn Morris (groin) and Jack Whatmough (knee) are definitely out.

Michael Bostwick (calf) is missing for Lincoln, while fellow defender Cian Bolger serves a three-match ban after being sent off against Shrewsbury.

Imps striker John Akinde could feature against the club where he failed to score in 11 appearances during the 2012/13 campaign.

VIEW FROM THE DRESSING ROOM
Read the thoughts of Kenny Jackett and Christian Burgess or register for a free iFollow account to watch the below video. 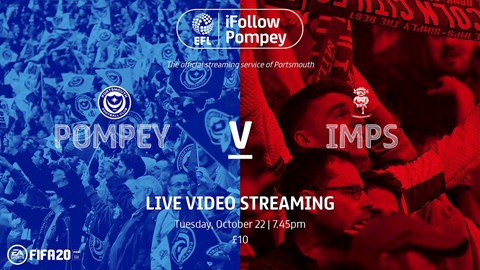 BETTING
Pompey are the 17/20 favourites with Sky Bet to secure all three points, while the visitors can be backed at 3/1. 
He arrived as a midfielder, although has already been used at right-back on a number of occasions so far this season. 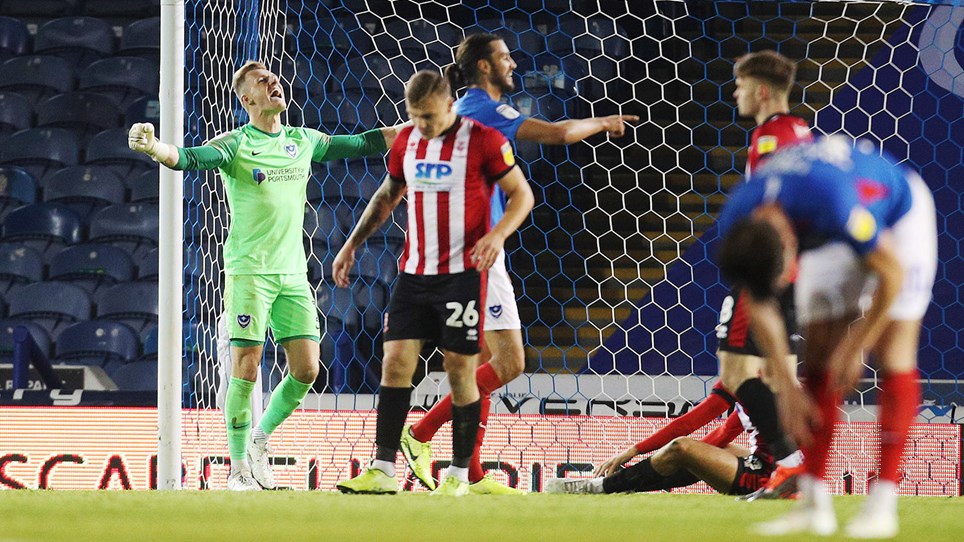 
Pompey returned to winning ways with a narrow victory over Lincoln at Fratton Park.

Goal Drought Over For Marquis


Seven League One matches had been and gone without a goal for Pompey striker John Marquis.

John Marquis was on target as Pompey returned to winning ways against a spirited Lincoln side at Fratton Park.

There were chances at both ends before the break and Marquis scrambled the ball home to end his barren spell.

It was a more turgid affair in the second half, but Craig MacGillivray was not overly troubled as the Blues saw the game out.

Kenny Jackett made one change from the side that were unlucky to lose at AFC Wimbledon on Saturday.

It came at right-back where James Bolton dropped to the bench to make way for on-loan Rangers youngster Ross McCrorie.

There was a familiar face in the starting line-up for the Imps – now managed by former Fratton boss Michael Appleton – as striker John Akinde led the line.

Pompey continued the theme of recent weeks by dominating possession throughout the first half, although the visitors had arguably the better chances.

There were half-chances for Ryan Williams and Marquis, but Lincoln really should have broken the deadlock on seven minutes.

He rescued his side at the other end soon after, though, with a key interception to stop Marquis meeting Williams’ cut-back from a neat Ben Close pass.

MacGillivray was then called into action to keep the game goalless, getting down to his left to save a fierce long-range effort from the lively Bruno Andrade.

It looked like being a brief reprieve, however, as the resulting corner saw the ball ping around the Blues box, but twice stopped from crossing the line by the Scottish keeper.

Marquis then fired over from a tight angle as the hosts continued to see plenty of the ball, while Sean Raggett – facing his former club – saw a header deflected into the arms of Josh Vickers.

But the Lincoln keeper was beaten on 28 minutes, despite making a decent stop to keep out Christian Burgess’ bullet header.

The ball ran loose, though, and MARQUIS had the simple job of nudging it over the line from just a yard out.

Andrade was still proving a menace at the opposite end of the pitch and a teasing cross somehow evaded everyone in the box, while a crunching Tom Naylor challenge halted his run down the left.

There was one more chance for Lincoln to level before the break, although MacGillivray was not too bothered by Andrade’s firmly-struck effort from outside the box.

Raggett collected the first booking of the evening shortly after the restart following a late challenge on Tyler Walker.

But referee Tom Nield somehow failed to spot the defender getting his shirt clearly tugged as he tried to meet a free-kick moments later.

Williams then had a chance to double the hosts’ lead following good work from Marquis and Marcus Harness, but was unable to find the target with a fierce finish.

Lincoln had a chance to equalise following a quick break on 54 minutes, but again nobody could get the finishing touch on his dangerous delivery and Lee Brown swept up.

The game became more scrappy as the second half progressed, with the hosts struggling to keep possession as well as they had before the break.

But they almost strengthened their lead just past the hour mark, as Vickers only just managed to prevent a firm Burgess header from crossing the line.

Jackett made his first substitution on 67 minutes, with Ronan Curtis replacing Harness wide on the left.

The new man was soon involved in the action and crossed for McCrorie, who took a touch before blazing over the bar.

Gareth Evans then did well to win a corner that he took himself and although Vickers flapped at it, he got enough on the ball to get it safe.

It was as committed a display as ever from Naylor and after losing possession in a dangerous area, the skipper did brilliantly to win it back again.

A quick break offered the chance to relive some growing pressure, but McCrorie’s pass to Marquis was not quite right and the striker did well to get the ball under control before firing over.

And Evans was also unable to keep his shot down after Naylor’s cross from the right had been only partially cleared.

It had been a strange display from the referee and when a late challenge on Williams went unpunished, even the normally placid Jackett was left raging on the sidelines.

But it did not prove costly for Pompey, who saw out the four minutes of stoppage-time to claim a welcome three points.


He arrived as a midfielder, although has already been used at right-back on a number of occasions so far this season.


Pompey returned to winning ways with a narrow victory over Lincoln at Fratton Park.

Goal Drought Over For Marquis


Seven League One matches had been and gone without a goal for Pompey striker John Marquis.