The sight of Brett Pitman lifting the EFL Trophy aloft will still be fresh in the minds of the 40,000-plus Pompey fans at Wembley back in March.

And now it all begins again, with Crawley visiting Fratton Park for the first fixture in Southern Group B.

It is the third year in a row that the sides have met in this stage of the competition – and the Blues won both of the previous meetings.

A 3-1 victory in Hampshire in October 2017 was followed by last season’s 1-0 success in West Sussex, courtesy of Dion Donohue’s strike.

There have been only eight competitive meetings between the clubs since their first clash in 2012, with Pompey coming out on top on six occasions.

Crawley currently sit eighth in the embryonic League Two table, as they seek a return to the third tier for the first time since 2015.

They also saw off top-flight Norwich in the Carabao Cup last week to set up a third round clash with Stoke.

Fans are remined that a penalty shoot-out will be held in the event of today’s game finishing all square, with the winners earning a bonus point.

TEAM NEWS
Kenny Jackett is likely to make a number of changes tonight, but has still promised to field a strong side.

Ronan Curtis (Republic of Ireland), Craig MacGillivray (Scotland) and Ross McCrorie (Scotland U21) are away on international duty.

Defender Joe McNerney (back) is currently sidelined for the visitors, who otherwise have a clean bill of health.

VIEW FROM THE DRESSING ROOM
Read the thoughts of Kenny Jackett and Alex Bass or register for a free iFollow account to watch the below videos.

TICKETS
Pompey fans can secure their seat online here or from the Anson Road ticket office. From 5.30pm this evening, they can also be bought from the ticket office in Frogmore Road.

Please note that only the Fratton End and South Stand Upper are being used this evening.

The Warrior Bar (far end of the Victory Bar) will be open for supporters to use from 5.30pm.

Domestic subscribers will, as usual, be able to listen to listen to live commentary from Andy Moon and Alan McLoughlin by signing into their account and visiting the match centre from 7pm.

BETTING
Pompey are the 4/9 favourites with Sky Bet to secure all three points, while the visitors can be backed at 5/1. 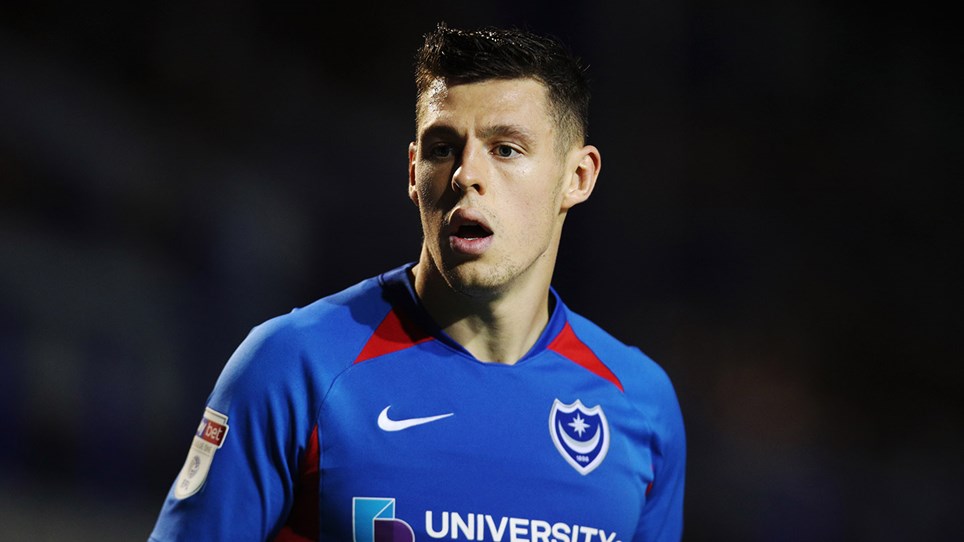 Bolton Back In Action


James Bolton enjoyed his return to the Pompey side against Crawley in the Leasing.com Trophy. 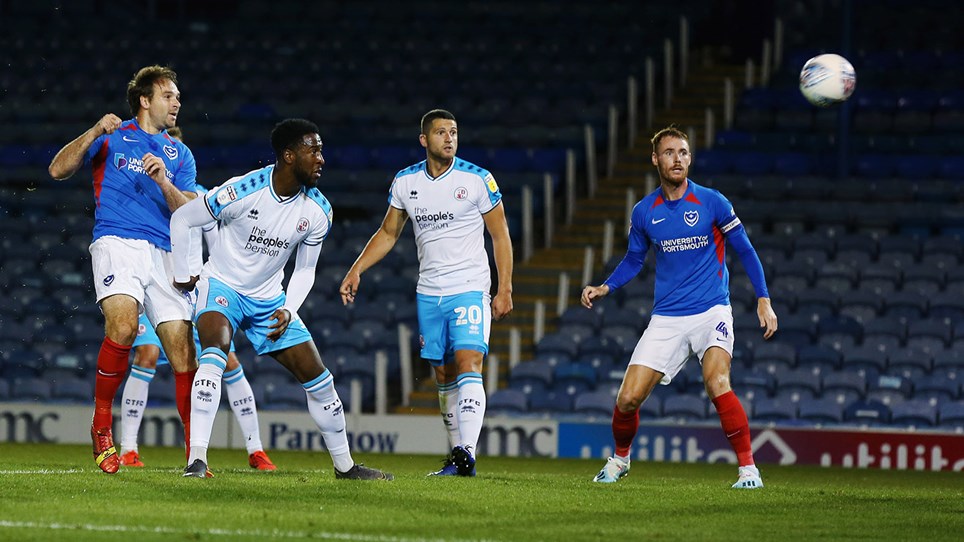 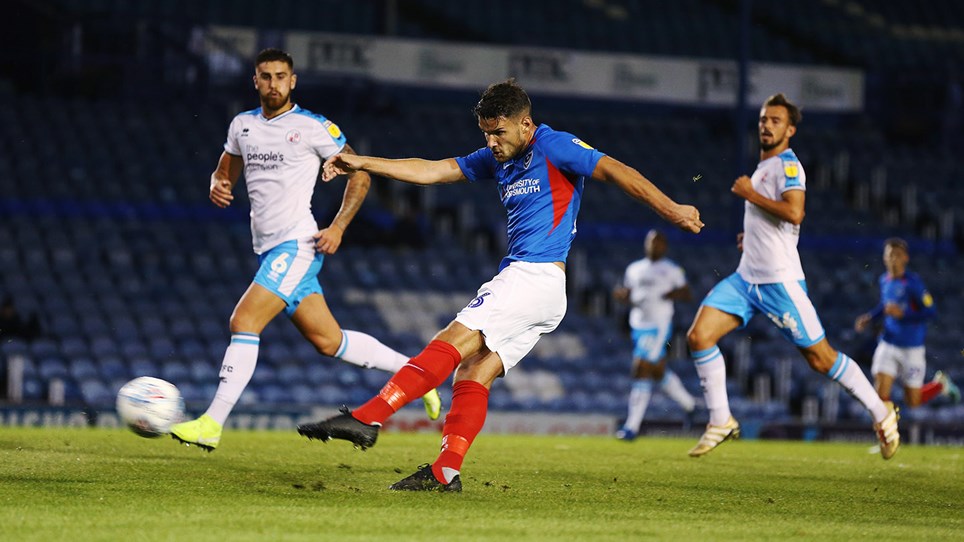 
Pompey got their Leasing.com Trophy campaign off to a winning start against Crawley. 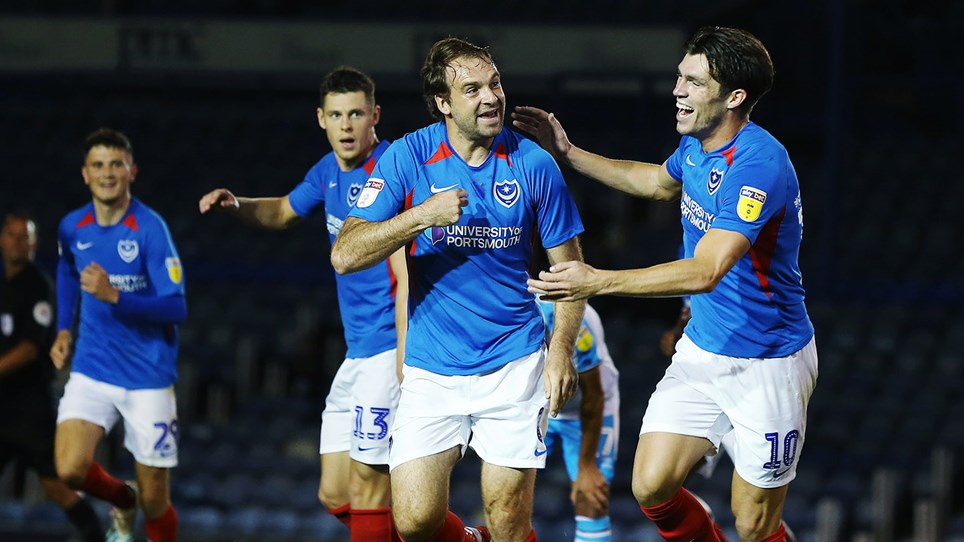 Brett Pitman came off the bench to score his first goal of the season and ensure Pompey began their defence of the Leasing.com Trophy with a win against Crawley.

Both sides had chances, although it appeared as if the Fratton contest might be heading for a bonus-point penalty shoot-out.

But Pitman neatly converted a corner from the impressive Brandon Haunstrup to secure all three for the Blues.

Kenny Jackett made six changes from the side that drew with Blackpool in the league at the weekend.

Teenager Leon Maloney was given an opportunity to impress out wide, with Ellis Harrison also recalled to the forward line.

It was a rare outing of the 4-4-2 system for the hosts and although the first half was lacking in quality, there were opportunities at both ends.

Crawley were first to go close following a quick break and Bass had to get down well to push Mason Bloomfield’s effort around the post.

Their opponents were applying plenty of pressure and dominating possession, but failing to trouble keeper Michael Luyambula.

Paul Downing conceded a free-kick right on the edge of the box on 20 minutes, only for Jack Powell to shoot straight into the wall.

The Blues soon stormed up the other end of the pitch and following good work from Harrison and Marquis, a goal-bound Evans strike was blocked by Jamie Sendles-White.

Both sides were taking advantage of some sloppy passing to steal possession and counter, and Tarryn Allarakhia was forced to stop one attack by fouling Maloney and collecting a booking.

Harrison slipped a neat pass through to Evans on the half-hour mark, but the midfielder could not find the target from an acute angle.

There was then a break in play while Evans got treatment following a challenge with Sendles-White that resulted in a yellow card for the Red Devils defender.

Both sides came close to breaking the deadlock in a breathless conclusion to the opening period of the contest.

Evans whipped in a dangerous cross that was not at the ideal height for Maloney, but he managed to fire in a shot that was saved by Luyambula.

George Francomb then fizzed an effort narrowly over the bar from the edge of the box, before Ashley Nathaniel-George sent an attempt just past the post.

Evans – who had taken a knock on the head earlier in the game – did not emerge for the second half, with Pitman replacing him.

A couple of Haunstrup corners might have caused Crawley problems just after the restart, but his team-mates were unable to take advantage.

The visitors then had a chance to score when the ball was cut back for unmarked substitute Nathan Ferguson in the box, with Bolton making a timely block.

Bass soon had to tear from his line to beat Ashley Nadesan to the ball, with the Red Devils man needing treatment after the pair collided.

Naylor played a clever pass over the defence for the onside Harrison to collect just past the hour mark, although his cut-back for Marquis was intercepted.

Then, after a quickly-taken free-kick broke down, Bolton claimed possession, cut on to his left foot and curled narrowly wide.

It looked like the opening goal would arrive on 68 minutes after Haunstrup had delivered a superb cross, but Luyambula pulled off a fine save to keep out Harrison’s header from point-blank range.

Maloney then sent in a dangerous ball of his own that was nodded back by Marquis and hacked over the bar by Sendles-White.

And it was from the resulting corner that the hosts took the lead, with another excellent Haunstrup cross hooked home by PITMAN.

The left-back’s delivery had been a particular highlight and a low centre was then met by Pitman again, although this time Crawley were able to block.

Pompey then saw out the final stages in relatively comfortable fashion to get the group stage campaign off to a successful start.

Bolton Back In Action


James Bolton enjoyed his return to the Pompey side against Crawley in the Leasing.com Trophy.


Pompey got their Leasing.com Trophy campaign off to a winning start against Crawley.