Pompey can take a giant step towards the knockout stages by beating Norwich U21s in the Leasing.com Trophy on Saturday (12.30pm kick-off).

Victory would not guarantee a top-two finish in Southern Group B, but it would certainly leave Kenny Jackett’s side as front runners.

They won their opening match against Crawley just 11 days earlier, with Brett Pitman’s neat finish enough to separate the sides.

The young Canaries were in action at Oxford on the same night and took the lead through Shae Hutchinson.

But goals from Cameron Brannagan and Shandon Baptiste saw the League One side snatch all three points.

The Norfolk outfit last entered this competition during the 2016/17 campaign and topped their group before losing to Swansea’s under-21s in the second round.

Norwich were celebrating the last time they visited Fratton Park, with a 1-0 victory in May 2011 enough to secure promotion to the Premier League.

Fans are remined that a penalty shoot-out will be held in the event of Saturday’s game finishing all square, with the winners earning a bonus point.

TEAM NEWS
Kenny Jackett is likely to make a number of changes, promising to field several youngsters and fringe players. Oli Hawkins and Ryan Williams are likely to be involved for the first time this season after returning to full fitness.

As an invited club, Norwich’s side must include at least six under-21s and no more than two overage players with 40 or more senior appearances.

Tickets can also be bought from both ticket offices from 9am on Saturday, but please note that only the Fratton End and South Upper are open for this game.

Fans can visit the Victory Lounge from 10am on Saturday, with bacon and sausage baps/baguettes available to buy.

Domestic subscribers will, as usual, be able to listen to listen to live commentary from Andy Moon and Guy Whittingham by signing into their account and visiting the match centre from 12pm.

SATURDAY’S LEAGUE ONE FIXTURES
All games kick-off at 3pm 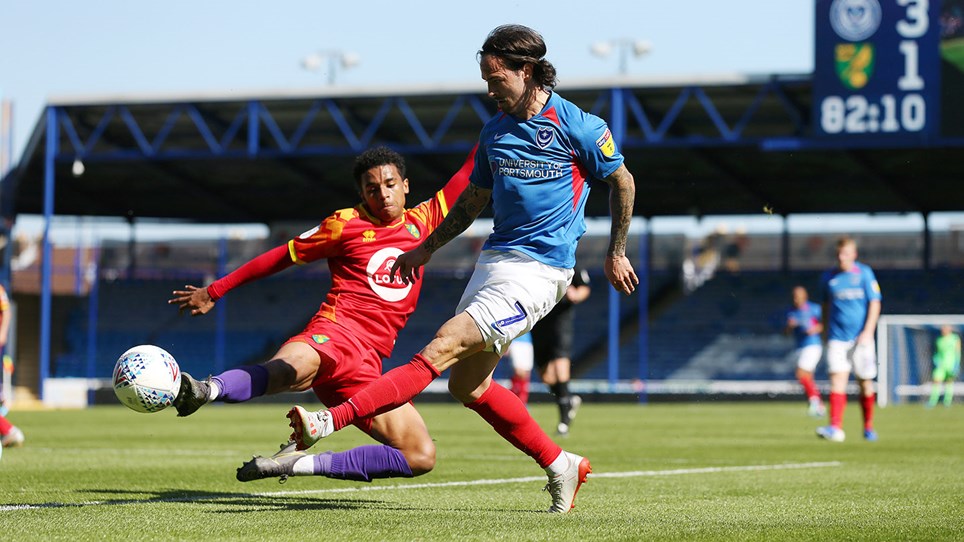 
It has been a difficult start to his second Pompey stint for Ryan Williams. 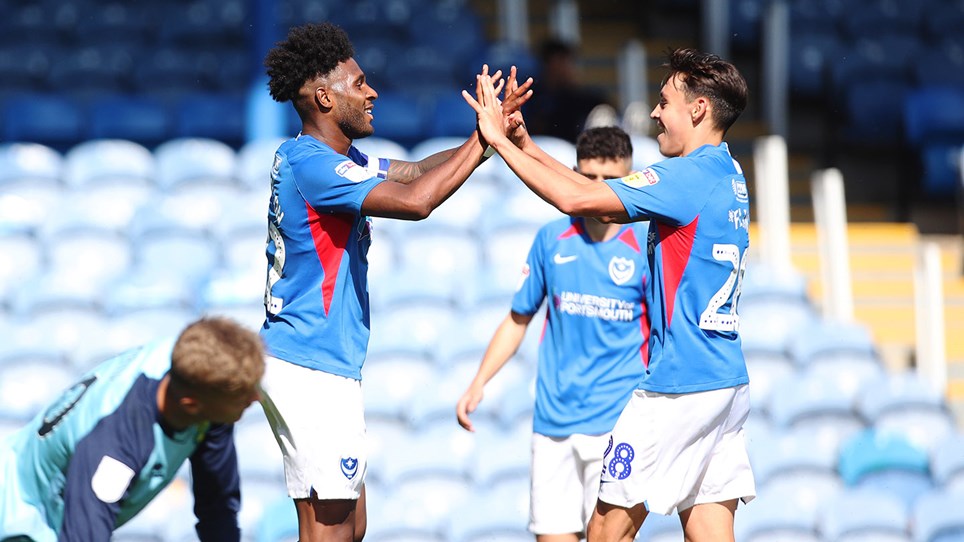 
Pompey made it two wins from two in the Leasing.com Trophy by seeing off Norwich's youngsters. 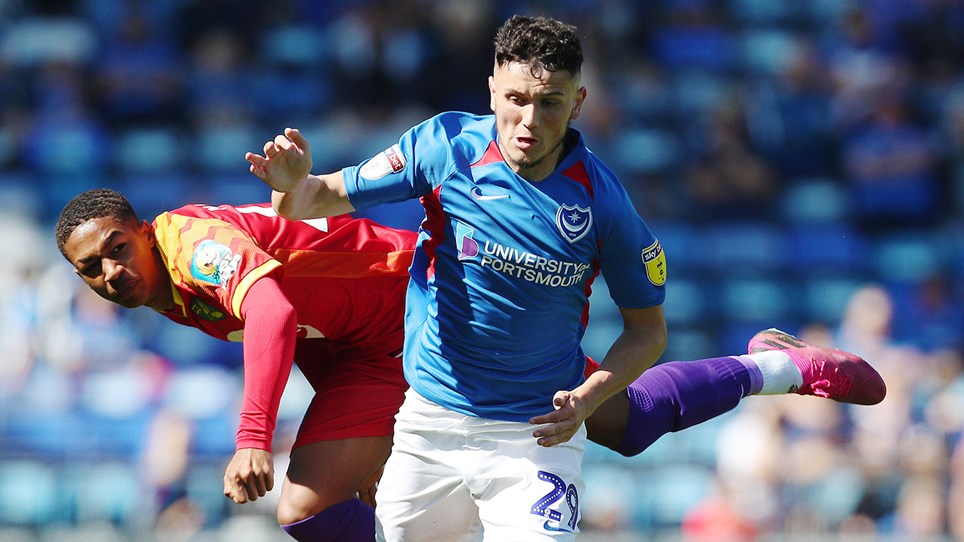 The Kids Are Alright


Leon Maloney has appeared in both of Pompey’s Leasing.com Trophy group stage wins so far this season.

Pompey took a giant stride towards the Leasing.com Trophy knockout stages with victory over Norwich U21s at Fratton Park.

Ellis Harrison made the most of fine passes from academy players Eoin Teggart and Josh Flint to bag a brace in the Southern Group B contest.

And it was a debut to remember for Flint, who lashed home a goal of his own in an entertaining fixture.

Thomas Scully came off the bench to reduce the Canaries’ deficit, but it was a mostly comfortable occasion for the Blues.

Kenny Jackett made six changes from the side that beat Crawley in the last group fixture 11 days earlier.

There were debuts for teenage academy players Flint and Teggart, while Joe Hancott – who became the club’s youngest player when fielded in this competition two years ago – also started.

A fit-again Oli Hawkins made his first appearance of the season in the centre of defence, with Andy Cannon and Anton Walkes the others to return.

It was a bright start in the south coast sunshine, with both sides playing on the front foot and looking to attack.

But the hosts were more threatening and Ciaren Jones – under pressure from Harrison – had to turn behind Teggart’s cross.

So it did not exactly come as a surprise to see the duo play pivotal roles in the hosts’ opening goal on 10 minutes.

Teggart whipped in a delivery from the left that was met by Maloney at the back post. He nodded the ball into the centre, where HARRISON headed home from a couple of yards out.

A clever pass from Cannon was missed by Harrison midway through the first half, but Teggart collected the ball and Jordan Thomas made a key block.

Norwich had opportunities of their own, but were limited to long-range efforts that did not trouble Bass.

The best chance came following a surging run through the centre from Aidan Fitzpatrick, with the resulting shot flashing narrowly past the post.

Teggart was impressing down the left and Saul Milovanovic had to make a crude challenge to halt one charge, earning a yellow card from referee Brett Huxtable.

Harrison tried to double the lead before the break, spotting Mair off his line and attempting an audacious effort from the halfway line, but screwed the ball wide.

A second goal did arrive moments later, however, with Teggart again playing a key role by crossing from out wide

The ball was headed back by Harrison for FLINT and although the Waterlooville youngster saw his first effort saved, he collected the ball, turned and sent a rocket into the roof of the net.

There was a break in play soon after the restart when Raggett required treatment following a clash of heads, but the centre-back was able to carry on.

Another fine cross from Teggart was then just too high for the onrushing Maloney, as the Blues went in search of more goals.

And the hosts did strengthen their advantage on the hour mark, when Flint slipped a neat pass through to HARRISON.

The striker – wearing the captain’s armband for the day – took a neat first touch before slotting the ball into the net.

Pompey appeared to be cruising, but they received a jolt when Norwich pulled a goal back on 67 minutes.

Raggett took a heavy touch and the ball fell for substitute Scully, who hit a fine angled strike into the top corner.

There was a welcome introduction soon after, with Maloney making way for Ryan Williams, giving the Australian winger his second debut for the club.

Ben Close and John Marquis were also brought on for Flint and Teggart, with the youngsters all receiving warm applause as they made their way off.

Harrison should have completed a hat-trick after being left unmarked to meet Cannon’s free-kick on 77 minutes, but directed his header straight at Mair.

And Marquis almost added a fourth goal late on when he raced onto Williams' pass, only for Mair to stick out a boot and divert the ball to safety.

Mair again used his foot to keep out a goal-bound Marquis shot in stoppage-time, moments after Cannon had flashed an effort past the post.


It has been a difficult start to his second Pompey stint for Ryan Williams.


Pompey made it two wins from two in the Leasing.com Trophy by seeing off Norwich's youngsters.

The Kids Are Alright


Leon Maloney has appeared in both of Pompey’s Leasing.com Trophy group stage wins so far this season.