Pompey have proven their calibre in cup competitions so far this season, but now they are looking for a run of league wins.

A midweek draw with Burton means there has been just one three-point haul from the opening six fixtures.

And Kenny Jackett’s side will be looking to improve that statistic when they visit Wycombe at the weekend.

But they will not be expecting an easy test against a Chairboys side currently sitting in third spot, albeit having played three games more.

Defeat at Gillingham last Saturday was the first they have suffered in League One, while they also exited the Carabao Cup to Reading on penalties in the first round. That win against the Shrimpers was particularly memorable, as Gareth Ainsworth’s men were trailing when the game entered the 89th minute.

Pompey enjoyed success on their last visit to Wycombe back in April, with Brett Pitman’s brace and a Jamal Lowe strike sealing a 3-2 triumph.

Wycombe will be without Paul Smyth and Alex Samuel, while Rolando Aarons faces a late fitness test.

TICKETS
Pompey have sold their full allocation of tickets and no more will be available to buy.

BETTING
Pompey are the 13/10 favourites with Sky Bet to secure all three points, while the hosts can be backed at 19/10. 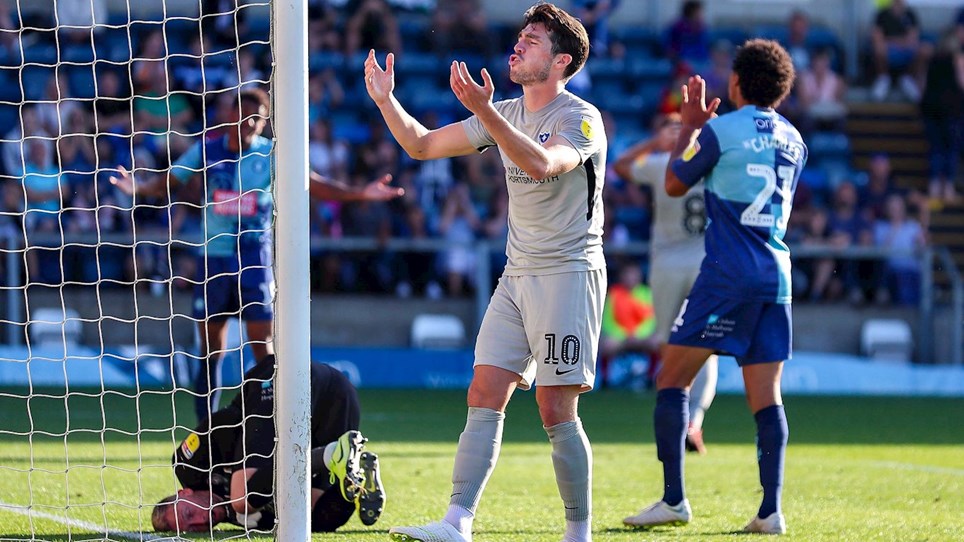 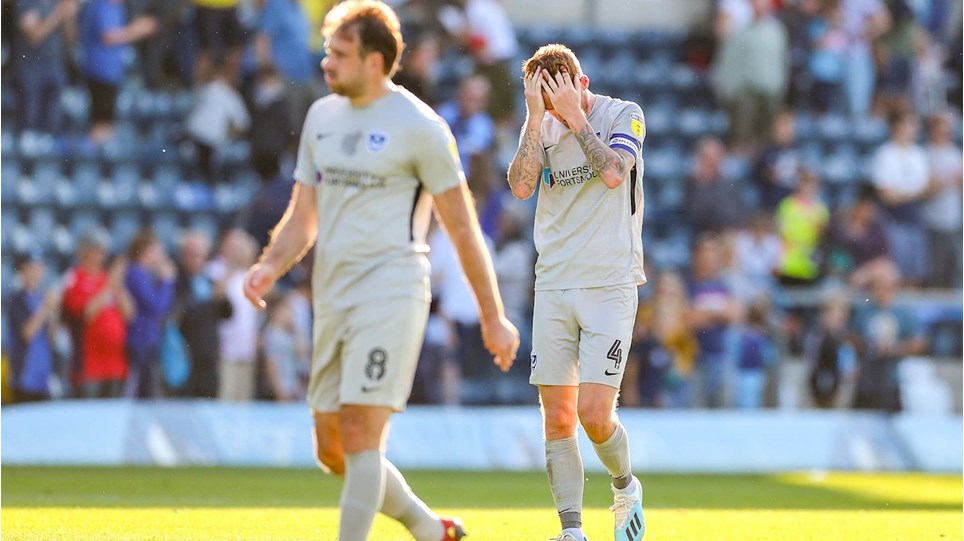 
Pompey conceded a late penalty to ensure their frustrating start to the season continued at Adams Park. 
Pompey’s defence had very little to deal with throughout the entire 90 minutes of their League One contest with Wycombe. 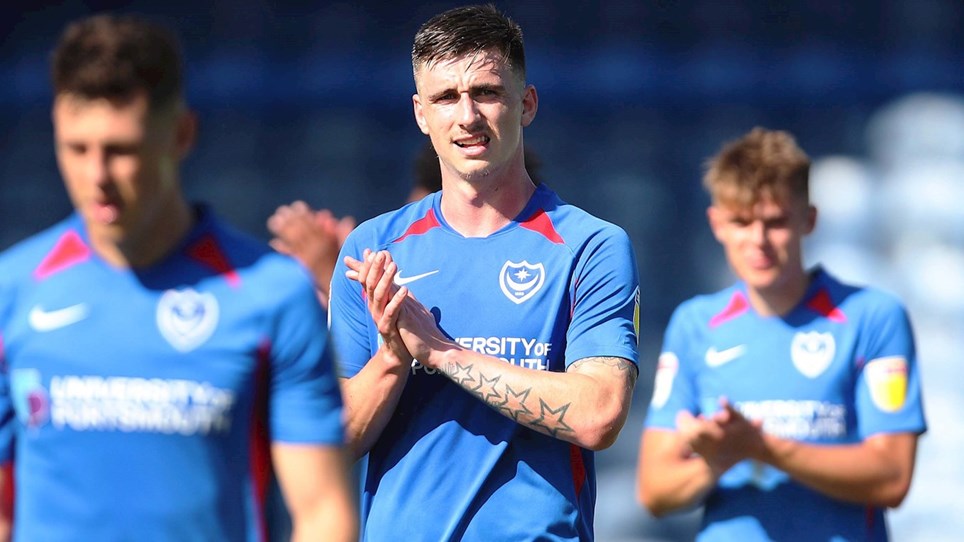 
Oli Hawkins makes his first league start of the season for Pompey’s League One match at Wycombe this afternoon.

Pompey’s disappointing start to the league season continued as a late penalty saw them slip to defeat at Wycombe.

Adebayo Akinfenwa netted the only goal of a game that was largely lacking in quality and saw both sides finish with 10 men.

Nnamdi Ofoborh was dismissed for a late challenge on Tom Naylor, with Ellis Harrison's reaction in an ensuing melee earning him a second booking.

Substitute Brett Pitman had the best chance to secure a fourth successive League One stalemate, but headed against the woodwork.

Kenny Jackett made four changes from the side that drew with Burton on home soil earlier in the week.

Oli Hawkins made his first start of the season alongside Christian Burgess in the centre of defence, with skipper Naylor moving back to midfield.

Paul Downing, Ross McCrorie, Ryan Williams and Pitman were the players to make way, all dropping to the bench.

There were a couple of former Fratton loanees in the hosts’ squad, with keeper Ryan Allsop starting and David Wheeler named among the substitutes.

It is fair to say that the opening 45 minutes will not live long in the memory of anyone present in Buckinghamshire.

Neither keeper had any meaningful save to make in a scrappy, attritional contest that was lacking any kind of attacking flair.

Naylor sliced an early attempt wide, while Ronan Curtis also failed to find the target with a shot on the half-volley.

The only scare for the visitors was when Craig MacGillivray failed to hold Allsop’s long punt up the pitch, but the referee quickly blew for a foul on the Blues stopper.

Pompey’s best chance of the half came when Ben Close slipped a pass through to Harrison, with the forward bending a shot into the side netting.

He then picked up the game’s first booking, although it was slightly unfortunate, with a slip sending him careering into the imposing figure of Akinfenwa.

The Chairboys were then forced to make a change when captain Matt Bloomfield – who has already suffered from concussion this term – was replaced by Ofoborh following a clash of heads.

One bright spot was the display from Hawkins, who was looking as natural a defender as anyone on the pitch.

But there was still not much to talk about in terms of attacking, with Close skewing wide from long-range after a poor Allsop clearance had left the net unguarded.

Everyone seemed ready for the interval, but that was delayed by an injury to stand-in Wycombe skipper Joe Jacobson.

Jamie Mascoll replaced him and the armband changed hands yet again, although Akinfenwa struggled to get it around his arm.

Both sides looked more purposeful once the action restarted, but that all-important final ball was still lacking.

The game then exploded into life following a late challenge by Ofoborh that led to both teams being reduced to 10 men.

Referee Sebastian Stockbridge immediately brandished a red card to the Wycombe substitute, who was in tears as he left the pitch.

There was then plenty of pushing and shoving from both sets of players, resulting in bookings for Akinfenwa and Christian Burgess.

And the final yellow was shown to Harrison – and it was his second of the afternoon, resulting in a walk down the tunnel.

Once the football restarted it was Pompey on the attack and a John Marquis cross had to be nodded behind before Curtis could reach it.

A free-kick from the left by Curtis was then parried away by Allsop and Burgess’ follow-up was deflected wide.

Stockbridge was drawing ire from both sets of supporters, not helped by some soft free-kick decisions for both sides.

Pitman replaced Bolton as Jackett looked to freshen up his attacking options, with both sides then going close to breaking the deadlock in quick succession.

Wycombe were first to try their luck and MacGillivray made a smart stop to deny Scott Kashket before the ball was hacked to safety.

And Pompey went straight up the other end of the pitch, with a long-range effort from Close deflected inches past the post.

Then, after Pitman was booked for a foul on Dominic Gape, a Mascoll free-kick was turned behind by MacGillivray.

But the Chairboys took the lead on 83 minutes after Naylor had been penalised for handling from a Nick Freeman corner.

Stockbridge pointed to the spot and, although MacGillivray went the right way, Ainfenwa’s penalty nestled in the bottom corner.

The visitors kept pushing throughout seven minutes of stoppage-time, but they were unable to find a late leveller.


Pompey conceded a late penalty to ensure their frustrating start to the season continued at Adams Park.


Pompey’s defence had very little to deal with throughout the entire 90 minutes of their League One contest with Wycombe.


Oli Hawkins makes his first league start of the season for Pompey’s League One match at Wycombe this afternoon.

Tickets for Pompey’s visit to Wycombe go on sale next week.

Blues fans have been handed an allocation of 1,800 seats in the Lords Builders Merchants Stand for the League One contest.

Subject to availability, seats can be bought by members from 9am on Thursday, August 29, before being released for general sale from 9am on Friday, August 30.

Wheelchair and ambulant tickets are priced at the above rates and include a carer if on the highest rate of DLA or PIP. Wheelchair users should contact Wycombe directly on 01494 441118 to book.