Both sides will be aiming to bounce back from weekend home defeats when Pompey visit Crewe this evening (6pm kick-off).

But while the Blues were left cursing a 2-1 reverse by Burton, their opponent suffered a much heavier loss.

A run of five goals conceded in the space of 14 minutes either side of the break helped Oxford inflict a 6-0 rout at Gresty Road.

It left the Railwaymen sitting 15th in the League One standings – 16 points clear of the drop zone and nine adrift of the play-off places.

They are higher than the other three sides to have achieved promotion last term, with Plymouth one spot behind, having played two games more.

Northampton and Swindon, meanwhile, are both battling to avoid a swift return back to the basement.

The Alex missed out on the title to the latter side on the points-per-game method, despite sitting above them on goal difference when Covid-19 saw the action grind to a halt.

Pompey drew 0-0 on their last visit to Gresty Road in 2016, while Ronan Curtis’ brace and goals from Tom Naylor and John Marquis saw them triumph 4-1 at Fratton Park earlier in the current campaign.

TEAM NEWS
John Marquis has completed a three-match suspension, but is still a doubt with a recurring ankle problem.

The home side will still be without midfielder Oli Finney, who broke his leg against Shrewsbury in February.

VIEW FROM THE DRESSING ROOM
Read the thoughts of Danny Cowley and Ben Close ahead of the game.

Subscribers will, as usual, be able to listen to listen to live commentary from Andy Moon and Guy Whittingham by signing into their account and visiting the match centre from 5.30pm. 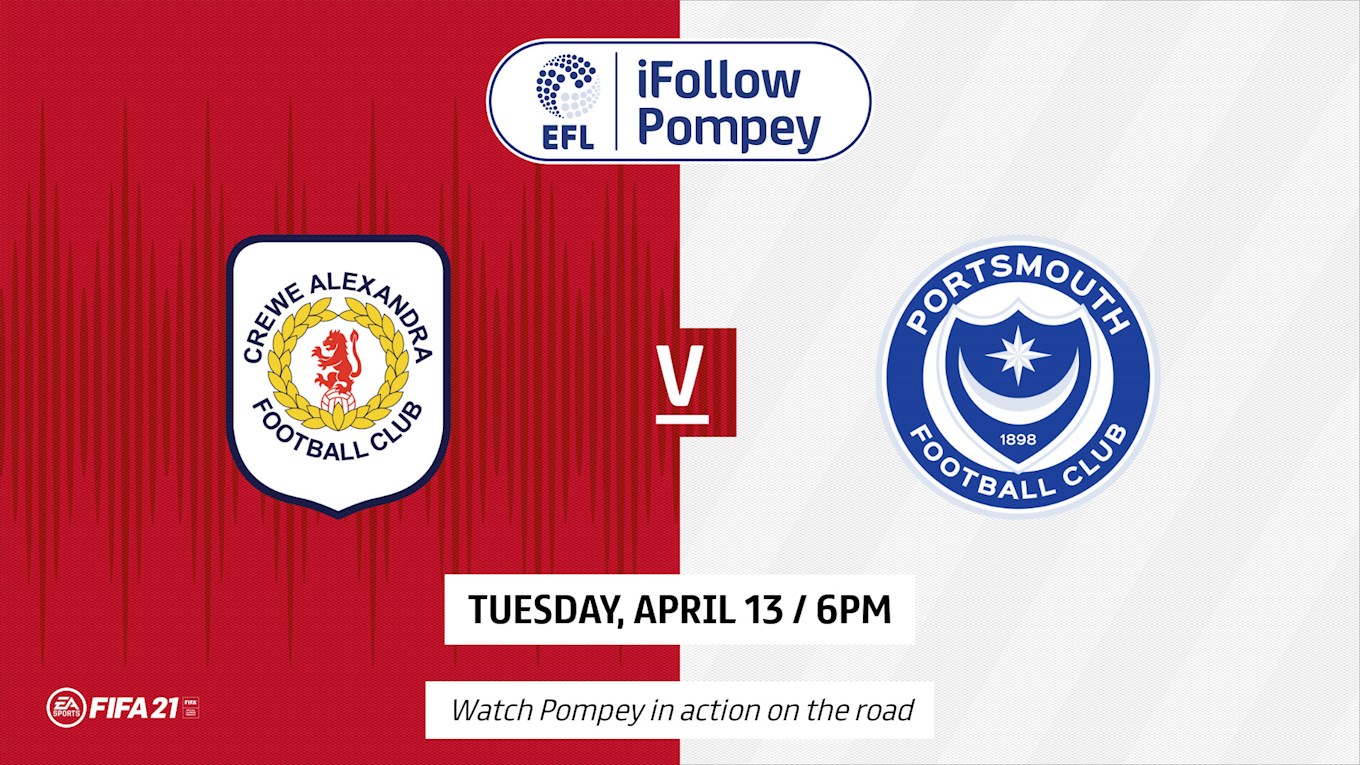 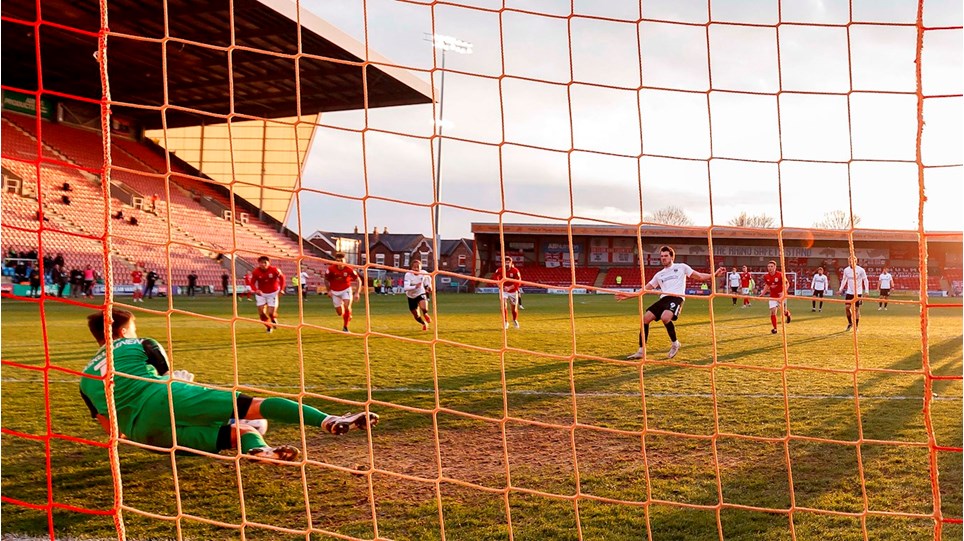 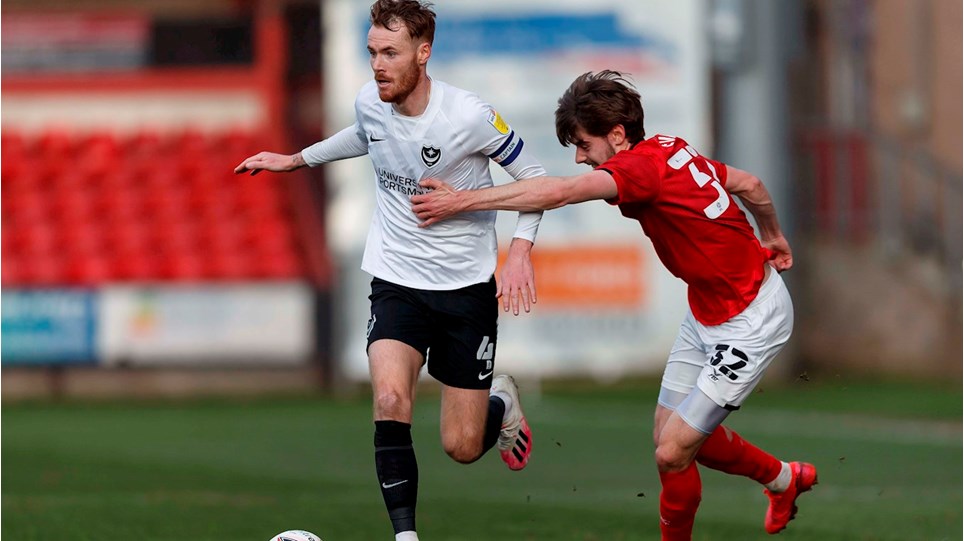 by Neil Weld at Gresty Road

John Marquis had a second half penalty saved as Pompey were unable to make their dominance count at Crewe.

The visitors looked in control for much of the Gresty Road contest, but could not find that all-important goal.

Will Jaaskelainen was the Railwaymen hero, keeping out Marquis’ spot-kick, as well as efforts from Jack Whatmough and Ronan Curtis.

Danny Cowley made two changes from the side that were beaten by Burton on home soil at the weekend.

Marquis returned from a three-match ban to lead the line, with Andy Cannon dropping to the bench and Curtis moving back to his more familiar position out wide.

The other switch was enforced, with Lee Brown replaced at left-back by Charlie Daniels after injuring his hamstring.

As part of the period of national mourning, a minute’s silence was held ahead of kick-off in memory of His Royal Highness The Prince Philip, Duke of Edinburgh.

Both sides then took a knee to once again show that there is no room for racism – or any kind of discrimination – in sport.

It has become a familiar sight for the Blues to dominate possession under Cowley’s charge and that continued against Crewe.

But for all their pretty passing play, there was not much to trouble Jaaskelainen until just before the interval.

Luke Offord did have to make a telling interception to prevent Ryan Williams getting on the end of a teasing Marcus Harness delivery.

Craig MacGillivray was also a virtual spectator, although Tom Lowery glanced a header wide from an Antony Evans cross.

There were six minutes tagged on to the end of the first half due to two injuries for the hosts, one of which led to Rio Adebisi being replaced.

And it was in that additional time that the Blues finally made a serious threat to break the deadlock, finishing with a real flourish.

A Daniels corner was nodded on by Sean Raggett and Whatmough’s shot was well saved by Jaaskeleainen.

The ball ran loose, though, and there was an almighty spell of pinball before the Railwaymen were able to hack clear.

Williams then slipped a neat pass through to Marquis, whose angled drive was kept out by Jaaskelainen low to the keeper’s right.

The action slowed down again following the restart, with Pompey unable to build on their patient play once they entered the final third.

And there was a nervy moment at the other end when Tom Naylor lost possession inside his own area.

The Blues skipper would have breathed a sigh of relief when the ball was fed to Owen Dale, who promptly fired straight at MacGillivray.

Pompey were then guilty of their own piece of profligacy as Williams lifted the ball into the centre and Marquis rose to head into Jaaskelainen’s arms.

The striker was soon given another chance to score, as Luke Offord failed to deal with Daniels’ long ball and Curtis was brought down by the keeper.

Referee Darren Drysdale took a few seconds before pointing to the spot, but Marquis’ penalty lacked power and was comfortably saved by Jaaskelainen.

The Crewe stopper received more praise a few moments later, instinctively sticking out a hand to keep out a deflected Curtis attempt.

Loan duo Harvey White and George Byers came on for Ben Close and Williams, with Cowley looking to inspire a breakthrough.

But the Blues were left frustrated in their search for a winner, as the Alex held on to ensure the spoils were shared. 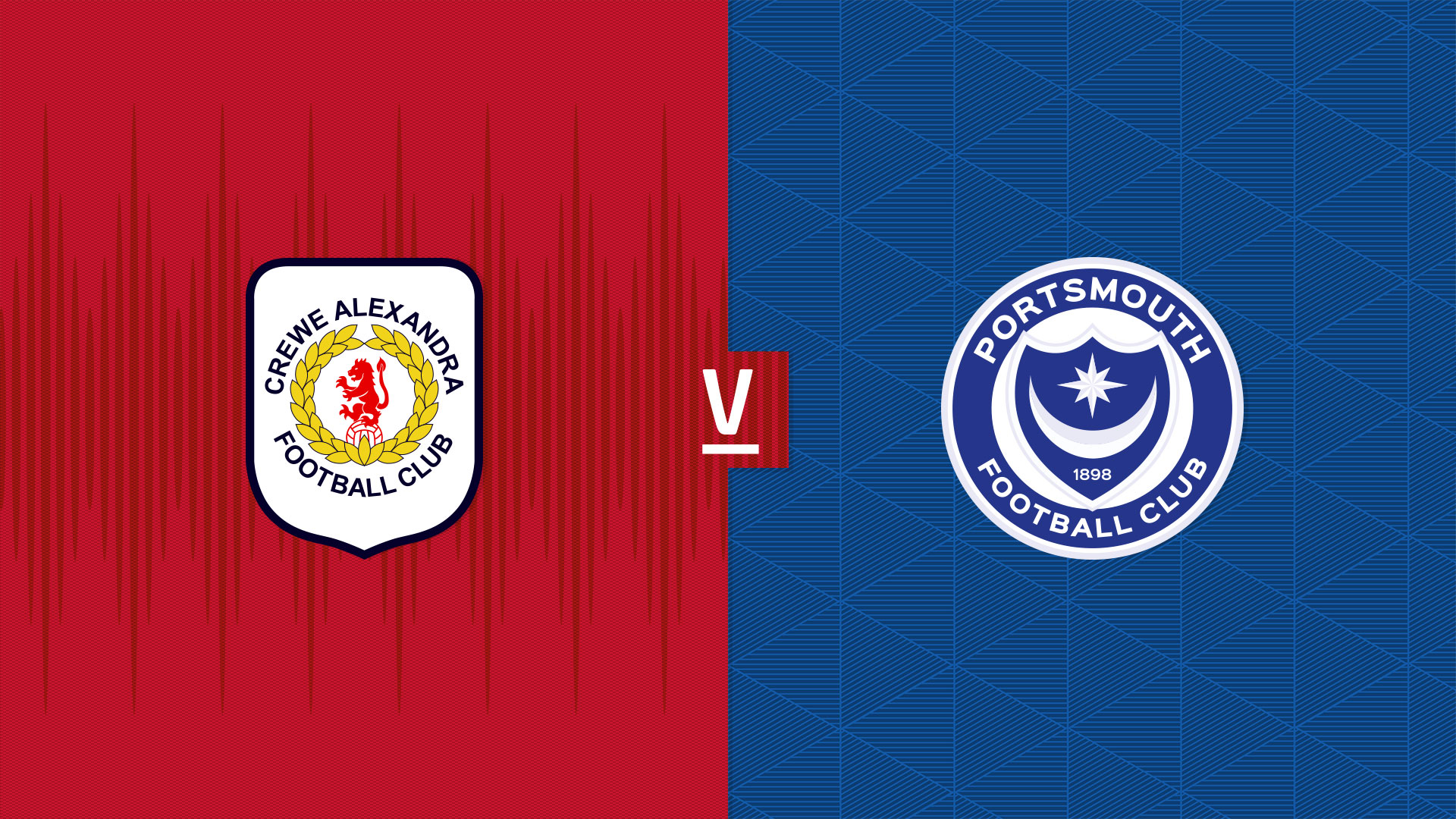 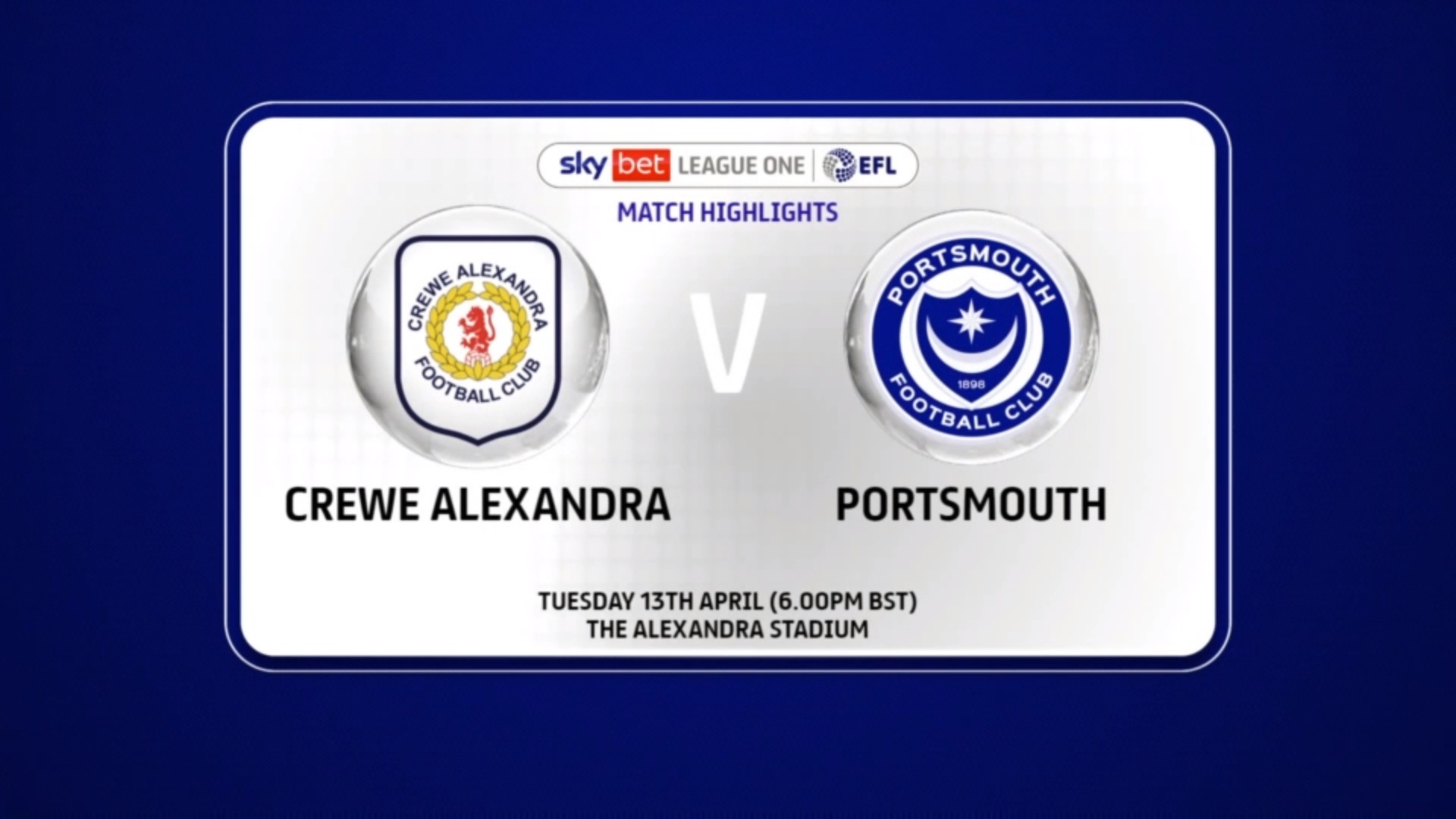 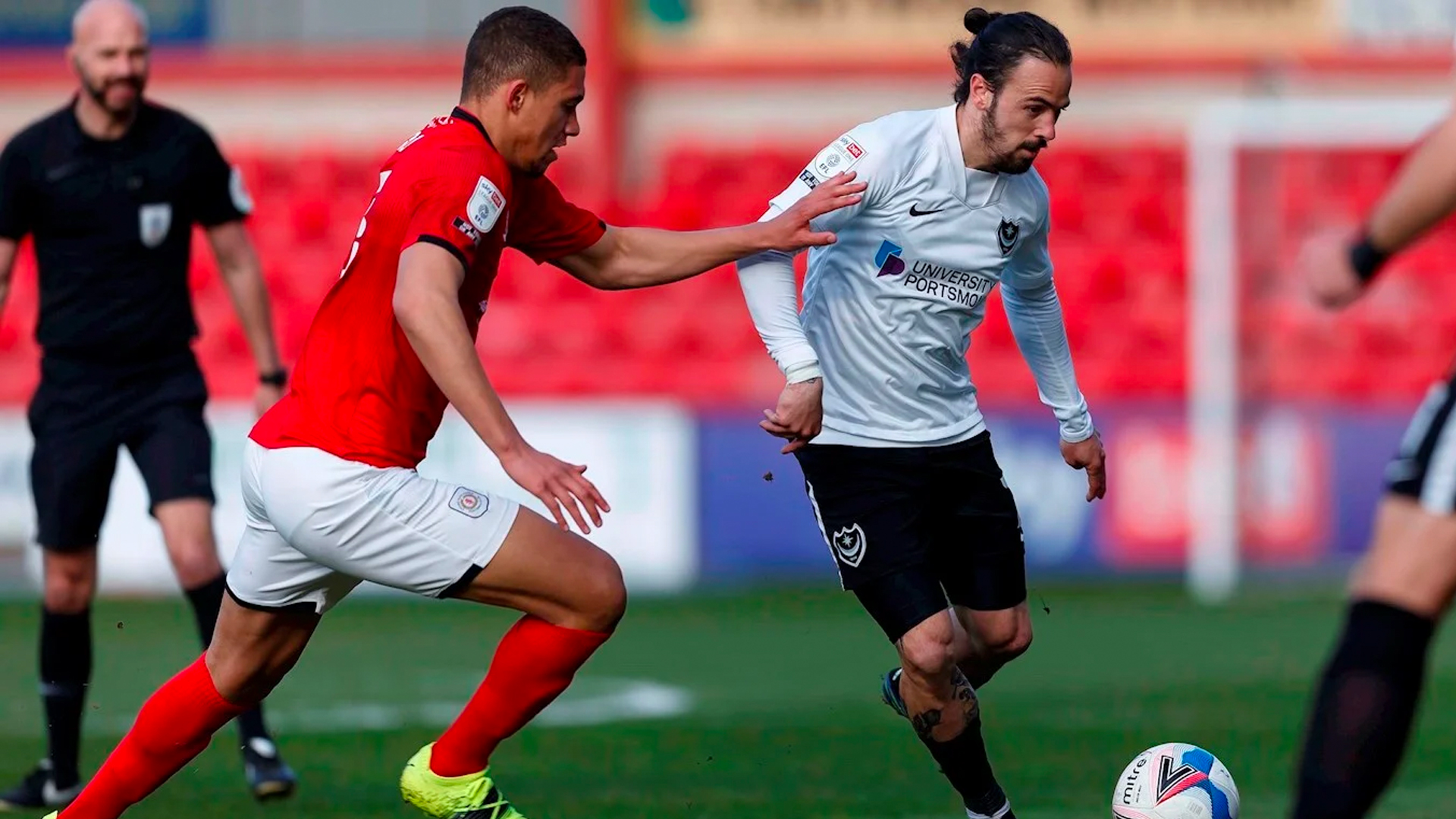