The Easter weekend sees Pompey taking on two sides engaged in a desperate battle to beat the drop.

But although their opponents are currently propping up the rest of the division, they have games in hand on most of the clubs sitting immediately above them.

Scheduled clashes with AFC Wimbledon and Swindon were postponed due to international call-ups, meaning it has been almost a fortnight since the side last took to the pitch.

And Brian Barry-Murphy’s men head to the south coast in relatively good form, having claimed four points from matches against promotion chasing Lincoln and Peterborough.

They would have felt disappointed not to beat the latter team at Spotland last time out, though, conceding a stoppage-time equaliser from the spot, just moments after taking the lead.

It means that Dale are sitting four points adrift of that all-important dotted line, with 10 fixtures left to play.

The side with the worst home record in the division have been better on the road, but have a forgettable history at Fratton Park.

Rochdale have claimed a single point – back in 1979 – in their six previous visits and were beaten 3-0 last term.

TEAM NEWS
John Marquis was unsuccessful in his appeal to have the red card collected at Shrewsbury last week overturned.

It means that the top scorer will now start a three-game ban, leaving Pompey with no available senior strikers.

That is because Ellis Harrison (knee) and Jordy Hiwula (ankle) are both injured, with keeper Alex Bass (foot) also sidelined.

Please note that subscribers based in the UK and Ireland will still need to purchase a match pass in order to watch the game live – unless they have received a code that has been distributed to all flexi-season ticket holders and members for this game.

BETTING
Pompey are the 4/7 favourites with VBET to secure all three points, while the visitors can be backed at 6/1. 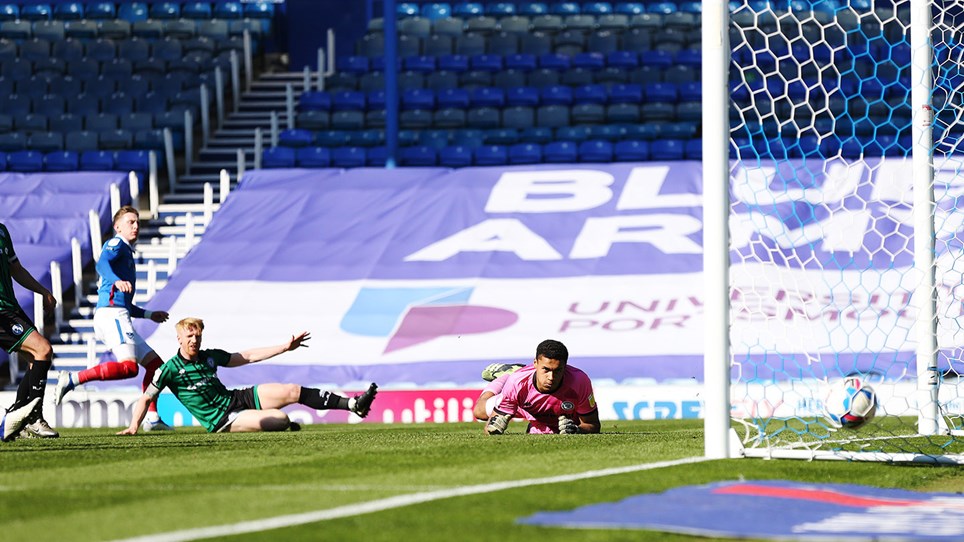 
Pompey recorded a third successive victory to strengthen their grip on fifth spot in League One. 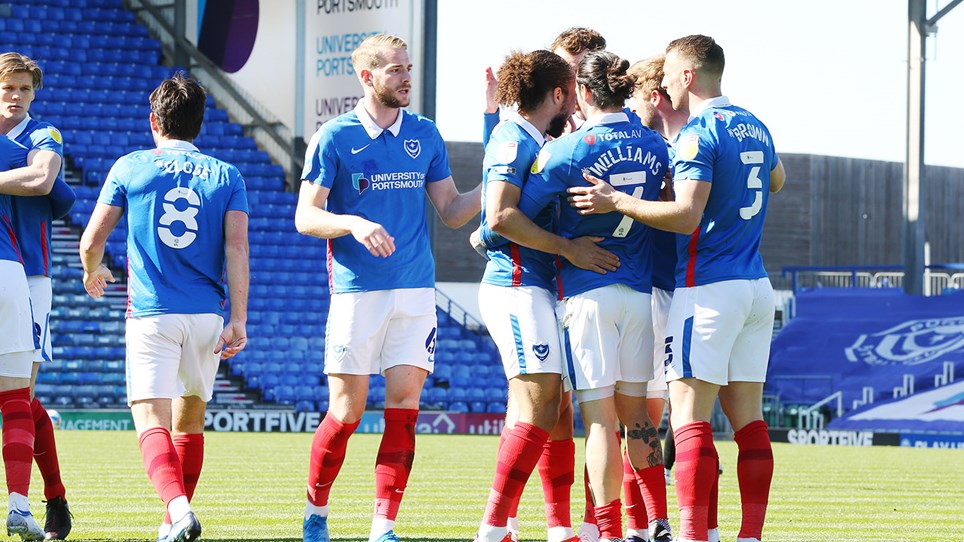 
Pompey saw off Rochdale at Fratton Park to make it three wins from three under new boss Danny Cowley. 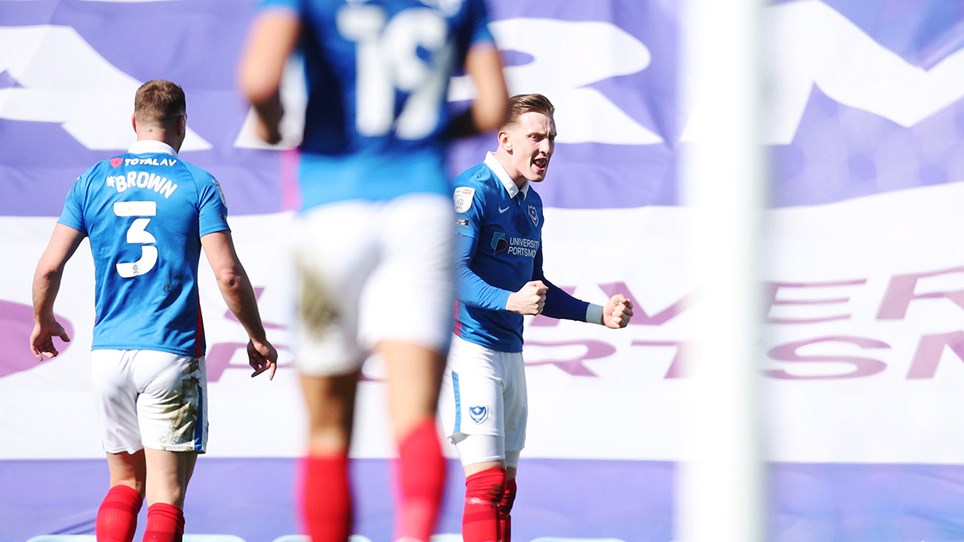 
A combination of injuries and suspension has left Pompey without any senior strikers for a couple of weeks. Cowley: Still Work To Do

The damage was done before the break, with Ronan Curtis' neat finish adding to an early Ryan Williams opener.

Some neat possession play ensured that the visitors were unable to really get into the game and although they had a few moments late on, Craig MacGillivray was rarely troubled.

Jake Beesley did score for Dale deep into stoppage-time, but it proved to be no more than a consolation.

Cowley made one enforced change from the side that had won at Shrewsbury the previous week.

With John Marquis starting a three-match ban, Curtis – back from international duty – took his place up front.

It meant that former Rochdale midfielder Andy Cannon had to be content with a place among the substitutes.

The sun was shining on the south coast and the hosts were basking underneath the blue skies as they took an early lead.

Marcus Harness got into the area and sent a low ball towards the far post, where WILLIAMS was waiting to bundle over the line.

Pompey were passing the ball patiently around the pitch and looking to find another goal, with Harness causing problems with his jinking runs.

It was Michael Jacobs who should have doubled the advantage on 19 minutes, however, scuffing his shot narrowly past the post after being played through by Curtis.

He tried again with an acrobatic effort from a Callum Johnson cross, but was unable to guide the ball on target.

Pompey did have a cushion towards the end of the half, though, as their dominance in possession paid off.

CURTIS collected a pass from Jacobs and advanced into the box before angling a precise low strike right into the bottom corner.

Gavin Bazunu was then alert to gather the ball after Harness had been found by Williams and tried to pick out Curtis.

Rochdale had barely threatened, but a long kick from their keeper sent Beesley through on goal in stoppage-time.

MacGillivray was off his line to deny the forward, however, and Sean Raggett hooked clear the loose ball.

Pompey did not abandon their passing principles once the action restarted and a nice move down the right provided another opening.

Harness swapped passes with Johnson and found Curtis, whose ball into the middle could not quite be flicked home by Williams.

Lee Brown then picked up possession and his cross-shot was gathered by Bazunu, as Rochdale held on.

The Blues were still controlling both possession and territory, with their opponents causing very few problems.

Bazunu was not having much to deal with at the other end, but the hosts’ healthy lead meant that was not causing much concern.

Cowley freshened things up on 65 minutes, with Tottenham loanee Harvey White coming on for Jacobs.

Rochdale did begin to look a bit more threatening as the contest neared its conclusion and Johnson did well to stop Kwadwo Baah getting a shot away.

The lively Harness made way for Cannon for the closing stages, with Pompey shoring up their midfield.

Charlie Daniels also came on for the tidy Ben Close, as the Blues seemed to be comfortably seeing out the final few moments.

But there were a few nerves when Beesley turned home Alex Newby's low cross in stoppage-time before the final whistle blew and Pompey could celebrate a third straight win.


Pompey recorded a third successive victory to strengthen their grip on fifth spot in League One.


Pompey saw off Rochdale at Fratton Park to make it three wins from three under new boss Danny Cowley.


A combination of injuries and suspension has left Pompey without any senior strikers for a couple of weeks.

Cowley: Still Work To Do 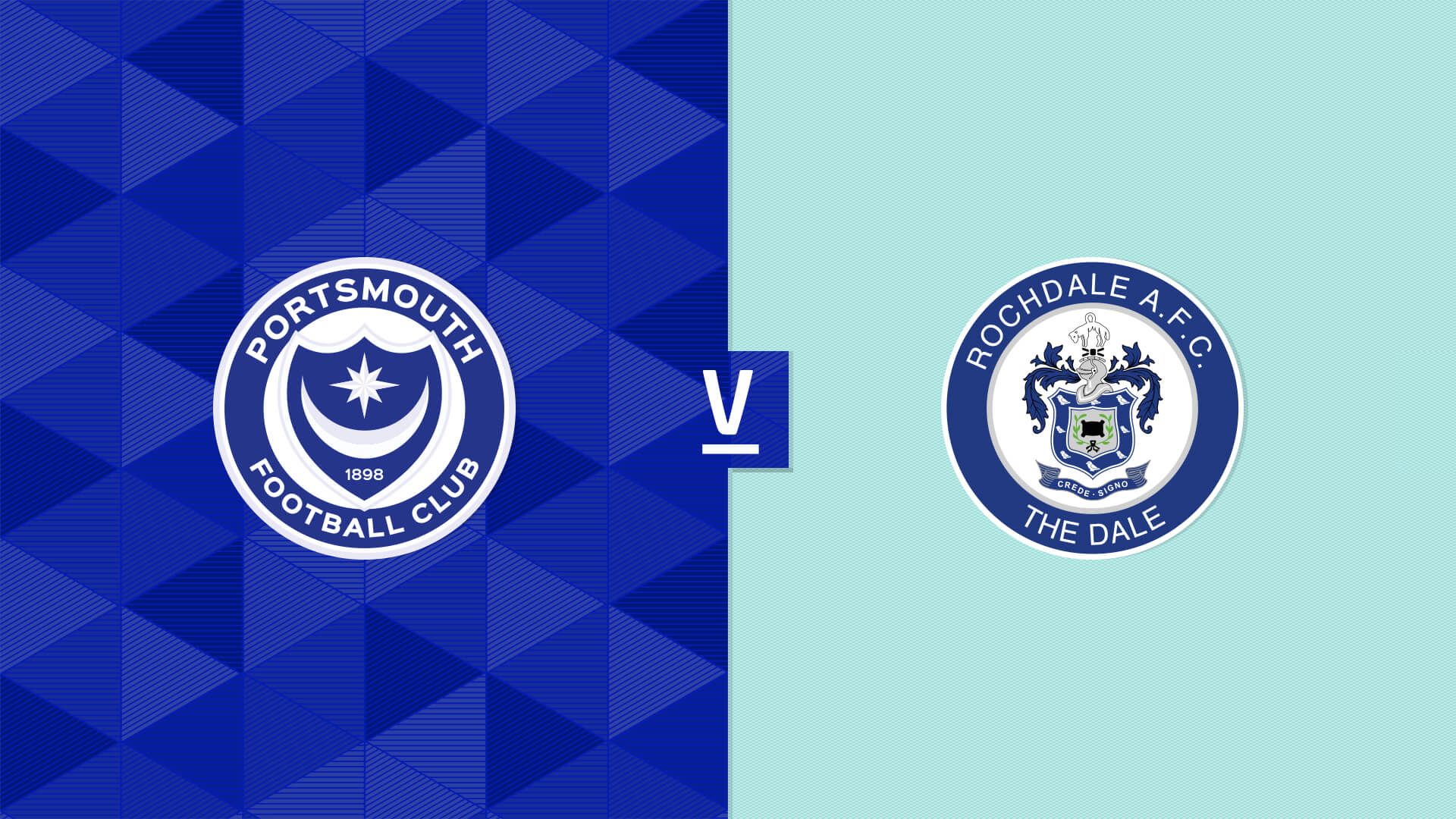 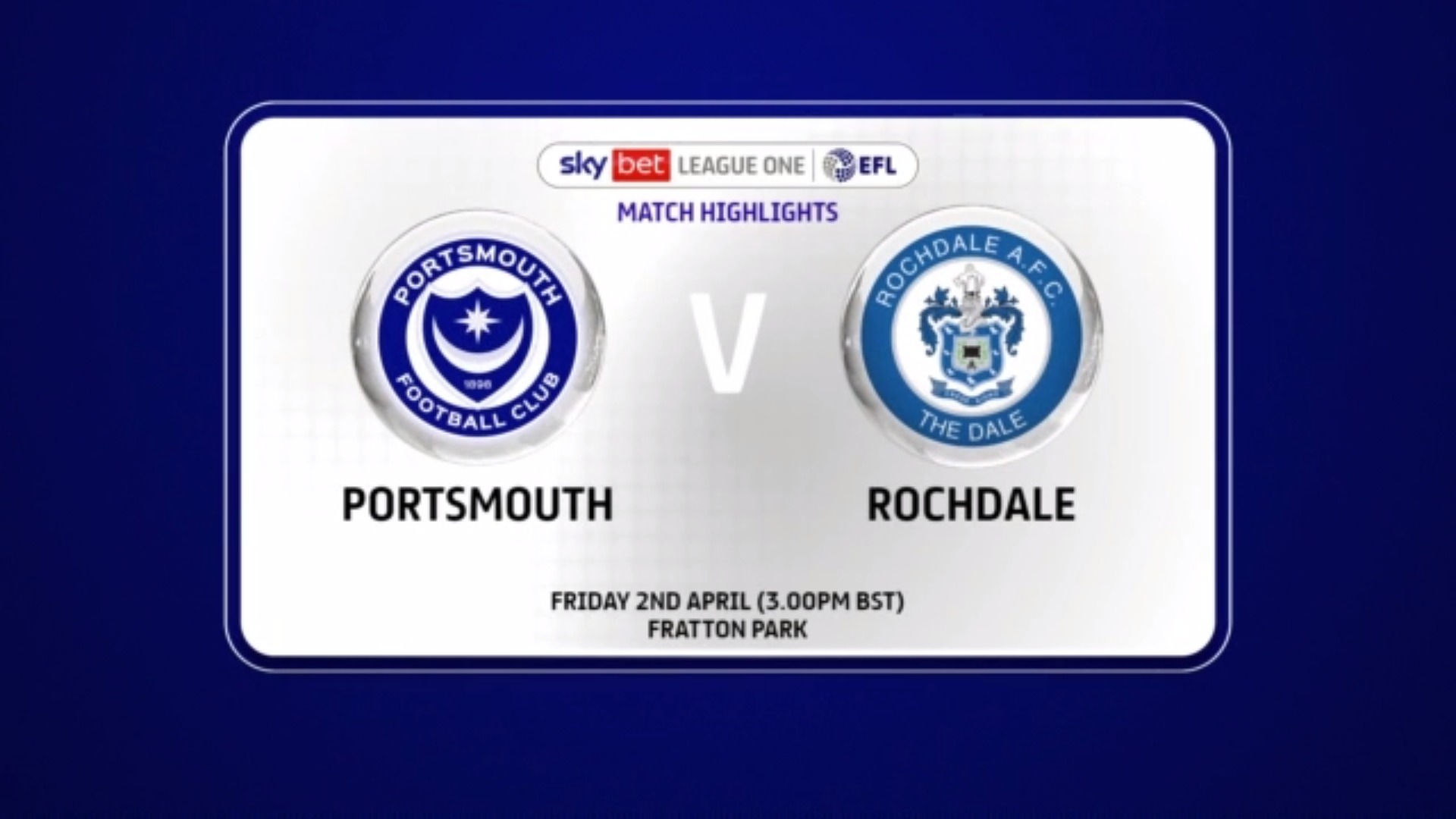 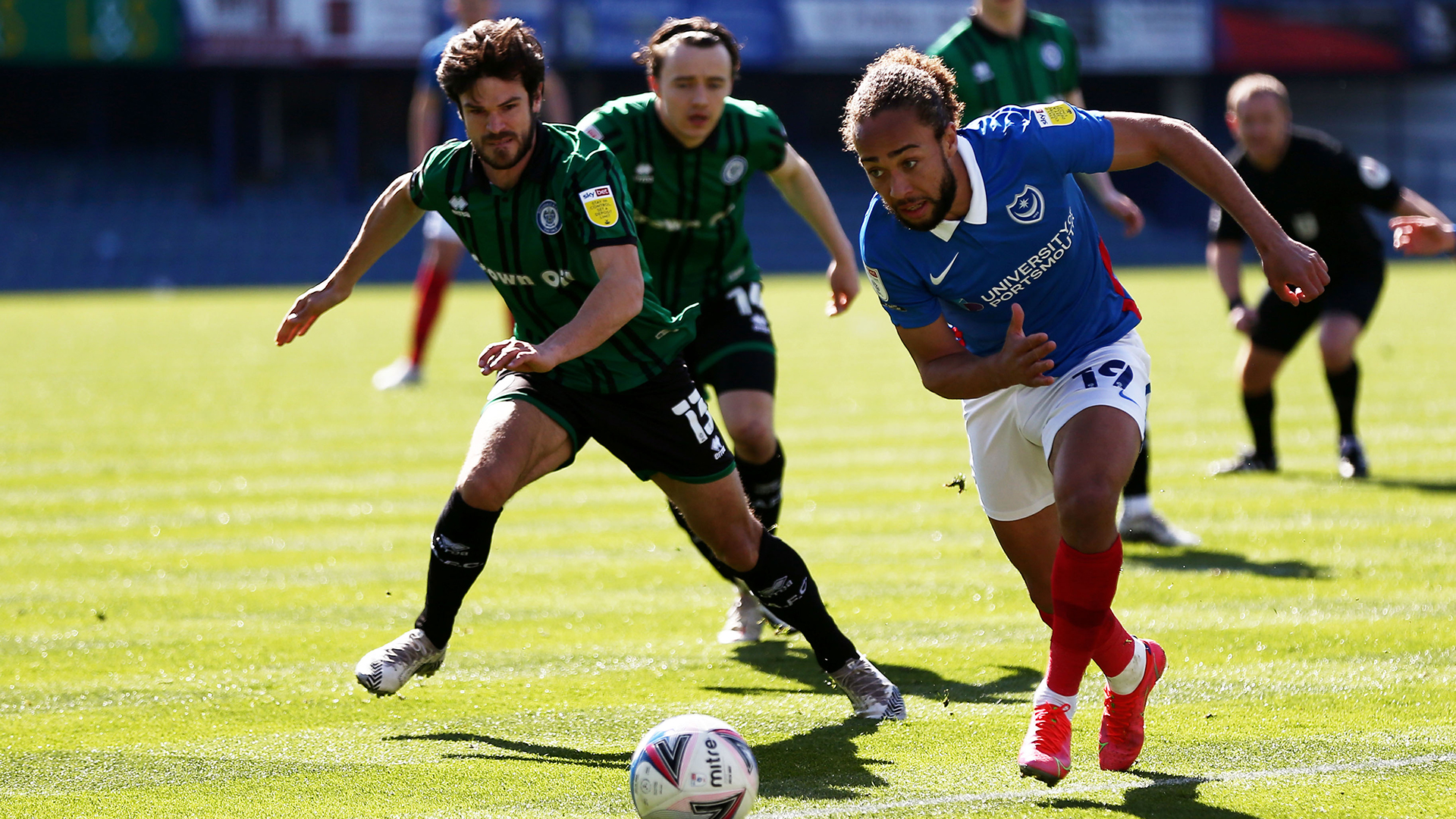