There is plenty at stake at both ends of the League One table when visit Swindon this evening (6pm kick-off).

A run of three games without a win has seen the Blues drop just outside of the play-off places with five fixtures remaining.

Their hosts, meanwhile, are desperate to remain in the division, although time is running out to preserve their third tier status.

In fact, the Robins – who are bottom of the table – could be relegated tonight if they lose and both AFC Wimbledon and Wigan win their matches.

The Wiltshire outfit have lost each of their past five games to leave them seven points adrift of safety.

And a 4-1 defeat at Plough Lane on Saturday led to John Sheridan stepping down as manager, having only replaced Richie Wellens in November.

His assistant Tommy Wright has been placed in charge for the remainder of the campaign, working alongside Lee Peacock from the academy.

Relegation would ensure an immediate return to League Two, with Swindon claiming the title – pipping Crewe on the points-per-game method – last term.

Pompey do not have fond memories of their last competitive trip to the County Ground, with a 5-0 defeat ensuring a miserable first day of 2013.

But goals from Ronan Curtis and Ellis Harrison ensured a 2-0 victory when the sides met on the south coast a couple of months ago.

Jack Whatmough starts a four-match ban following his second red card of the season at MK Dons on Saturday, while there are doubts over the fitness of Lee Brown (hamstring) and Andy Cannon (back).

Paul Caddis (hamstring) could also miss out, but Brett Pitman is likely to feature against his former club.

Subscribers will, as usual, be able to listen to listen to live commentary from Andy Moon and David Connolly by signing into their account and visiting the match centre from 5.30pm.

BETTING
Pompey are the 3/4 favourites with VBET to secure all three points, while the hosts can be backed at 7/2. 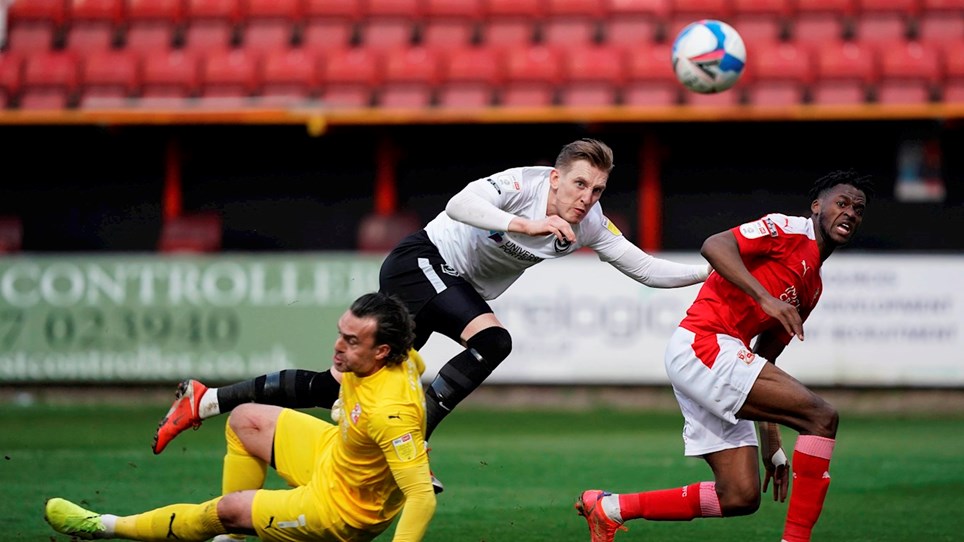 
Pompey's winless run was extended to four games after they were beaten by Swindon at the County Ground. 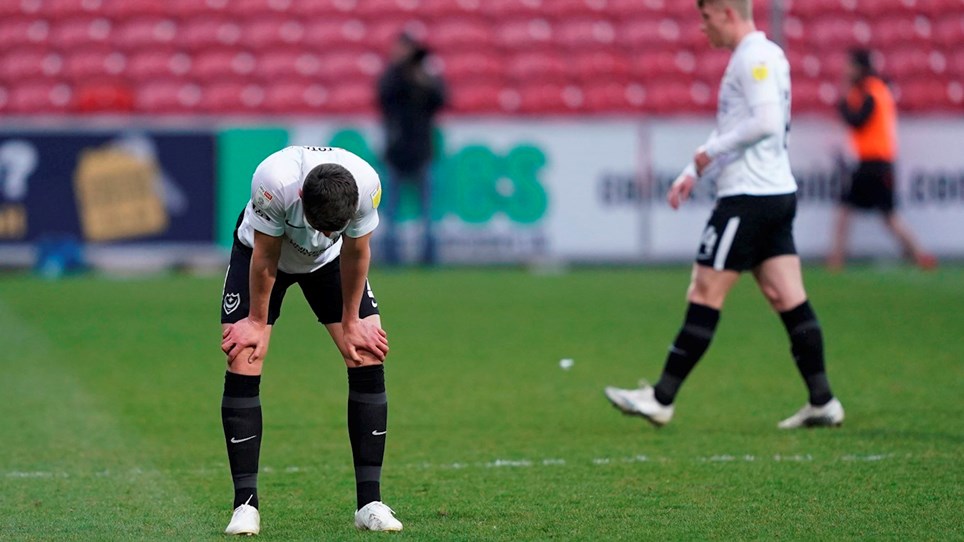 
Pompey dropped to eighth in the League One standings following a disappointing defeat at struggling Swindon.

Close: Both Ends Costing Us


When Pompey reached the League One summit at Christmas, they were clinical in attack and stingy at the other end. 
Pompey once again took control of possession and had more shots than their relegation-threatened opponents.

by Neil Weld at the County Ground

Pompey stumbled again in their hunt for a play-off spot, losing to bottom side Swindon at the County Ground.

Brett Pitman came back to haunt his former club with a goal in each half, the second coming from the penalty spot.

Ronan Curtis reduced the deficit and the Blues pressed for a leveller, only for Tyer Smith to wrap things up for the struggling Robins at the death.

Danny Cowley made two changes from the side that were narrowly beaten at MK Dons at the weekend.

Ben Close recovered from a groin problem to replace Harvey White in the centre of midfield, while Rasmus Nicolaisen came in for Jack Whatmough – who begins a four-match ban – at the back.

It was a nervy start from the visitors, who looked nervy at the back and sloppy in possession during the opening stages.

But they had the first decent chance of the contest on 13 minutes, as Marcus Harness met Callum Johnson’s corner with a fine header that was turned over by Lee Camp.

Craig MacGillivray was soon called into action at the other end, getting down to his right to push clear a Scott Twine free-kick.

He could do nothing to prevent Swindon from breaking the deadlock moments later, though, after the Blues had lost possession.

Their opponents took advantage in clinical fashion, as Jack Payne laid the ball off for Pitman to lash into the net.

Pompey began to enjoy more possession as the half progressed, without really threatening to equalise.

One fine Johnson pass over the top played Marquis through and although the striker made a nice first touch, his second saw the ball run wastefully out of play.

A low Harness ball towards the striker at the back post was cut out by Anthony Grant, as the visitors finished the half on top.

But the Robins dealt with a couple of Charlie Daniels corners to ensure they would go in ahead at the interval.

Pompey showed plenty of attacking intent once the action restarted, but were continuing to struggle in the final third.

Curtis – who was the most dangerous player going forward – flashed a shot wide, while another Daniels corner came to nothing.

They almost levelled on 55 minutes after Tom Naylor sent a perfectly timed lofted pass over the Robins back-line.

Marquis collected it well, but his shot was blocked by Dominic Thompson and Camp saved the follow-up from Harness.

Swindon went straight up the other end and came close to doubling their advantage, with MacGillivray coming to the rescue after Smith had squared the ball to Pitman.

And the home side did go further ahead just past the hour mark, with Daniels conceding a penalty for the second time in as many games.

He was booked for bundling over Smith, who had taken a heavy touch following fine work from Pitman.

Referee Ben Toner pointed to the spot and Pitman made no mistake, slamming the ball right into the bottom corner.

Pompey were trying to fight back and a fizzing strike from Curtis had to be palmed behind by Camp after Ben Close had laid the ball into his path.

George Byers then came on for Daniels, with skipper Naylor dropping into a three-man defensive line, while Sean Raggett soon made way for James Bolton.

And they had a lifeline on 82 minutes, as CURTIS controlled a threaded Marquis pass and bundled the ball home.

They came close to a leveller seconds later, with Byers playing a neat one-two with Curtis and drawing a smart stop from Camp.

Cannon was next to go close, with a low drive that crept inches past the post, as the Blues increased the pressure.

But Swindon wrapped things up in stoppage-time, as Smith stole possession, advanced forwards and neatly found the bottom corner.


Pompey's winless run was extended to four games after they were beaten by Swindon at the County Ground.


Pompey dropped to eighth in the League One standings following a disappointing defeat at struggling Swindon.

Close: Both Ends Costing Us


When Pompey reached the League One summit at Christmas, they were clinical in attack and stingy at the other end.


Pompey once again took control of possession and had more shots than their relegation-threatened opponents. 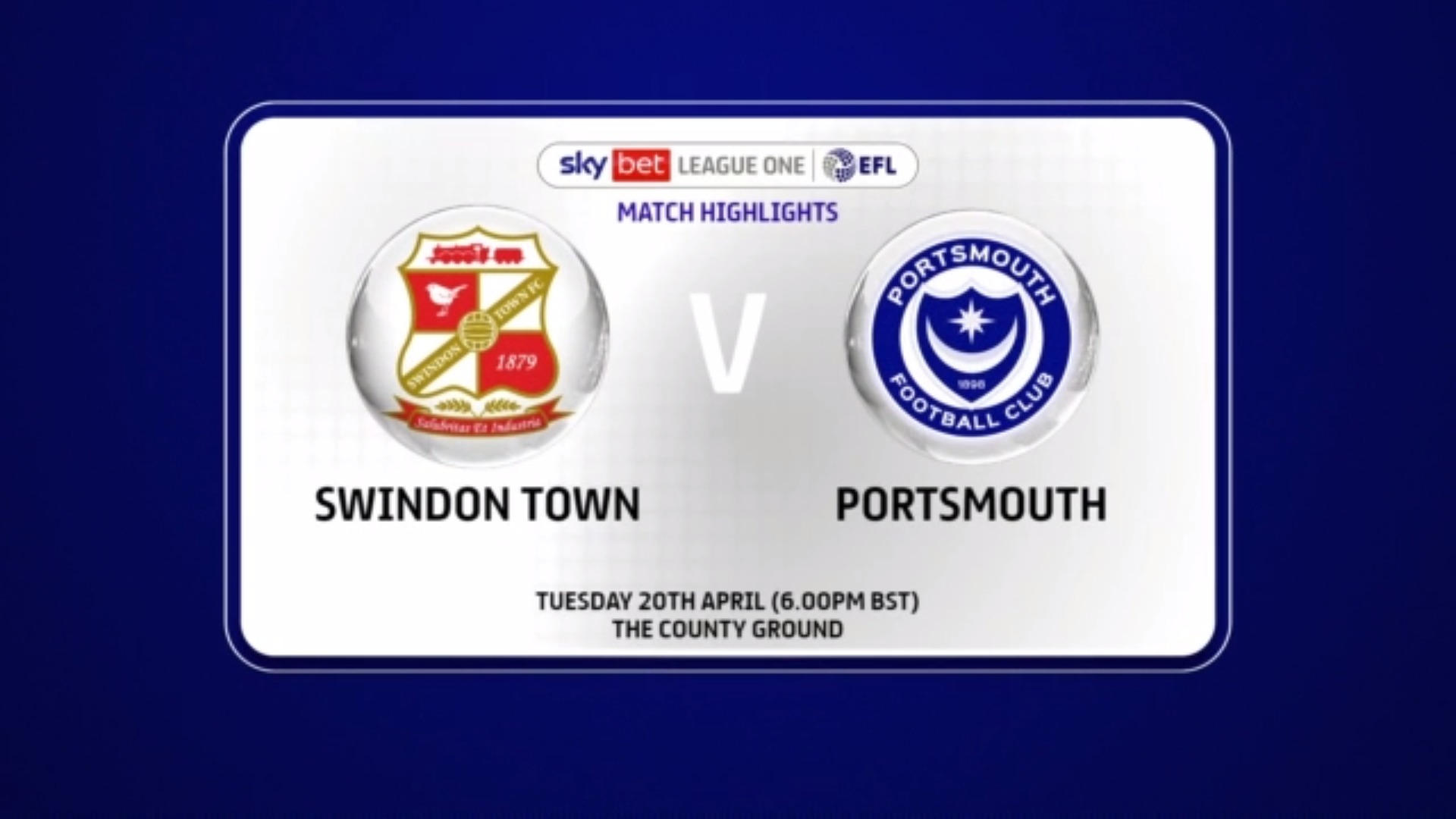 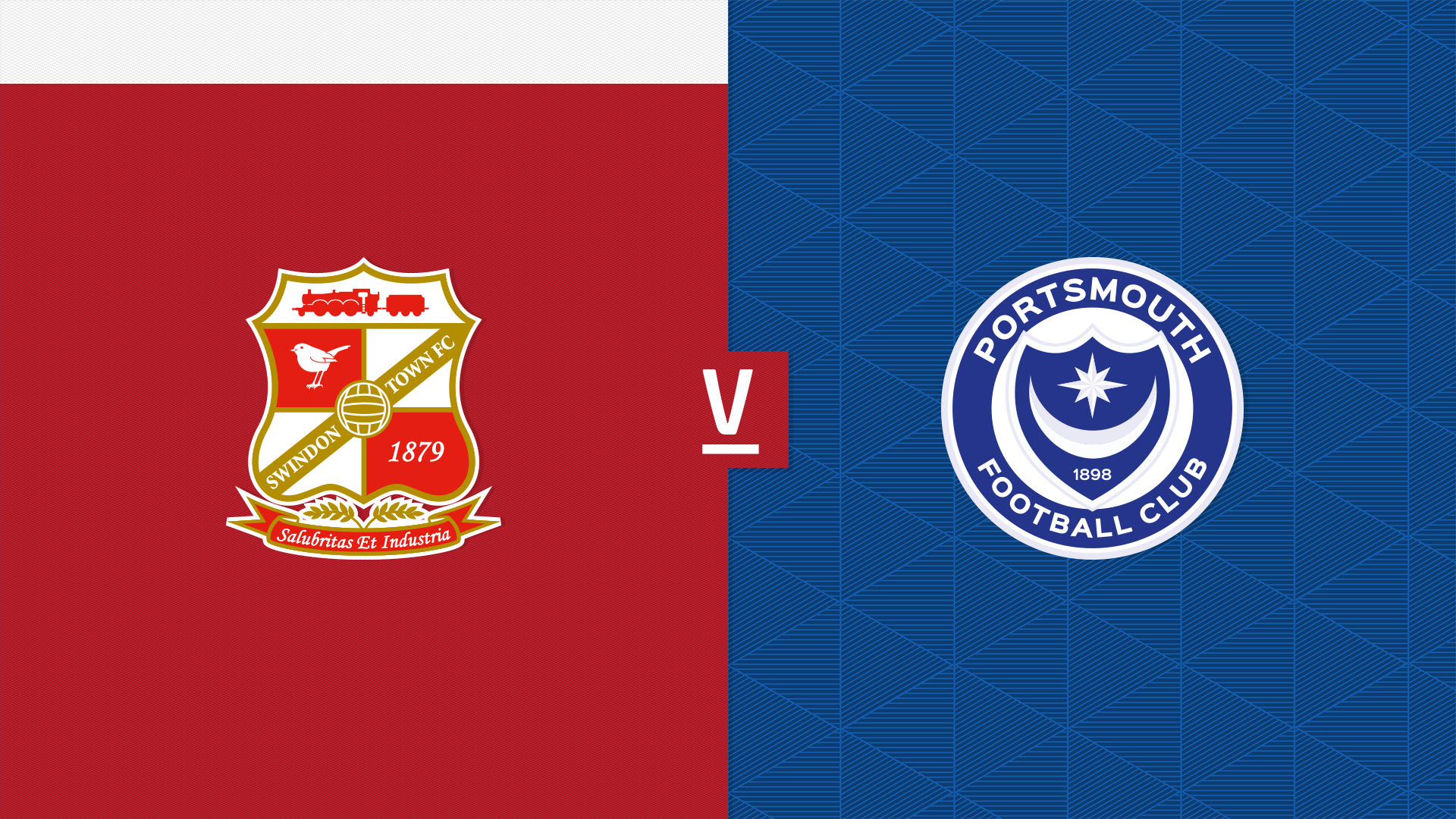 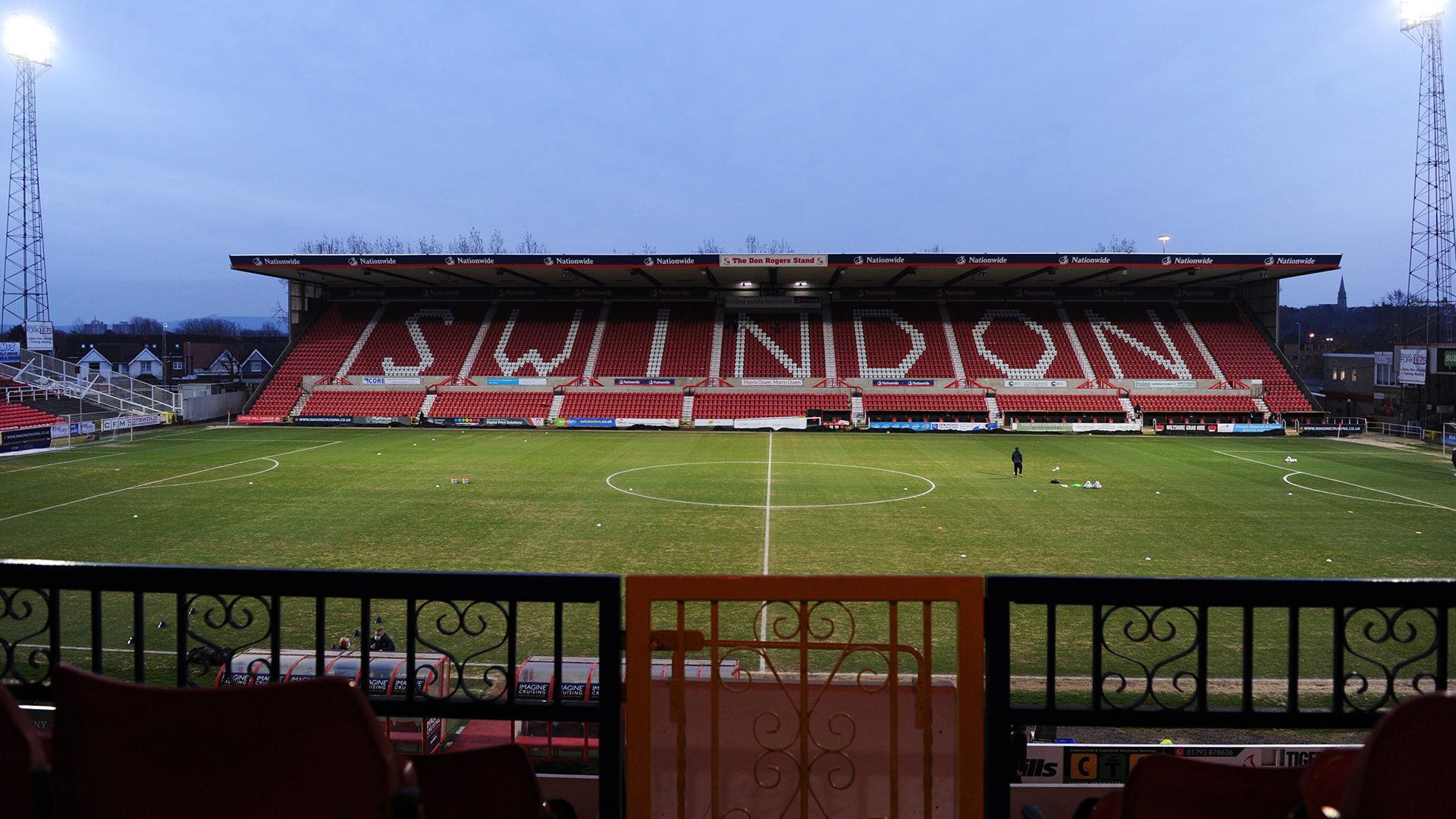