Pompey return to League One action this evening when they make the long trip north to Blackpool (7pm kick-off).

Both sides enjoyed FA Cup victories at the weekend, with the Blues thrashing King’s Lynn and their next opponents easing past Harrogate.

But it is the battle for points that will top their list of priorities, with Kenny Jackett’s men trying to close the gap on the top two.

The Tangerines, meanwhile, are down in 15th position, but have enjoyed a decent run of form in recent weeks.

After winning just one of their opening seven league games, Neil Critchley’s men head into tonight’s contest with six successes from the past eight matches in all competitions.

One of those defeats was in their most recent third tier encounter, though – a 3-2 reverse at Doncaster seven days ago.

The Covid-19 pandemic ensured that the sides only met once last term, with Marcus Harness on target in a 1-1 draw at Bloomfield Road.

TEAM NEWS
Michael Jacobs (knee) is the only player currently missing for Pompey and could be back in training next week.

Blackpool are expected to be without Matty Virtue (hamstring) and MJ Williams (elbow), but Luke Garbutt returned from a spell on the sidelines at the weekend.

VIEW FROM THE DRESSING ROOM
Read the thoughts of Kenny Jackett and Tom Naylor ahead of the game.

BETTING
Pompey are the 29/20 favourites with Sky Bet to secure the victory, while the hosts can be backed at 17/10. 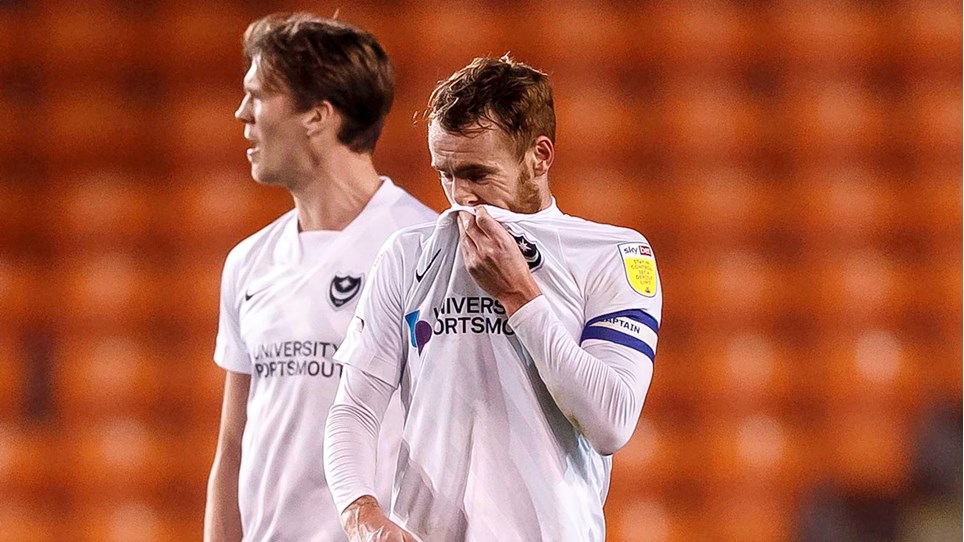 
Pompey dropped to sixth in the League One table after losing an uneventful game at Blackpool. 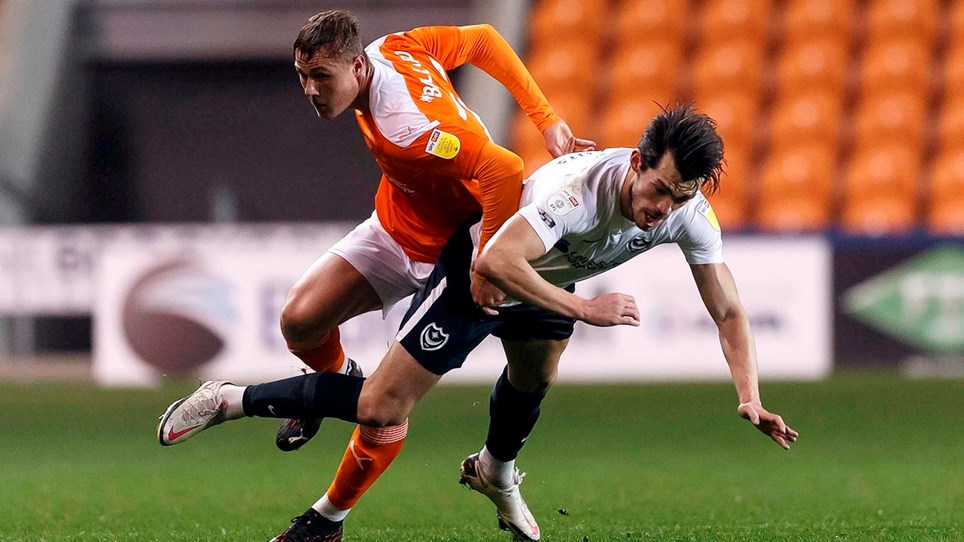 
Pompey's unbeaten away league record came to an end against Blackpool at Bloomfield Road. 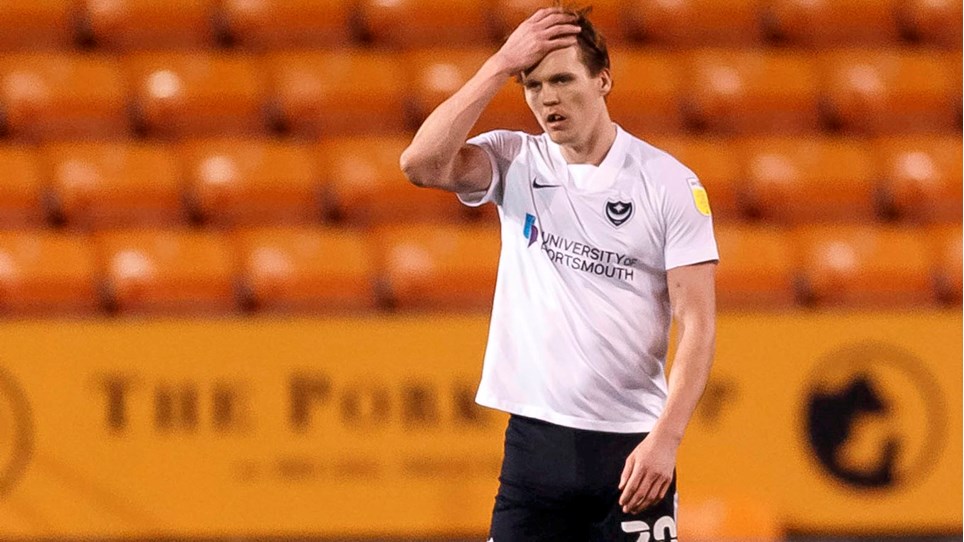 
Sean Raggett has tipped Pompey to bounce back from their disappointing night in Blackpool. 
It was a game that Pompey will want to instantly consign to the scrapheap of the season.

Pompey’s unbeaten away record in the league finally came to an end as they were narrowly beaten in a lifeless clash with Blackpool.

It was a contest befitting the soulless atmosphere inside a mostly empty Bloomfield Road, with hardly any chances at either end of the pitch.

But it was the Tangerines able to celebrate all three points, courtesy of a second half strike from Keshi Anderson.

Kenny Jackett made one change from the side that drew with Oxford in the last league outing seven days earlier.

Ellis Harrison dropped to the bench to make way for Ryan Williams, who was positioned out on the right, with Marcus Harness joining John Marquis up front.

There was not much to trouble either keeper in an opening 45 minutes that was extremely short on anything that could truthfully be called exciting.

Blackpool dominated possession and territory in the early stages, but were unable to penetrate the Blues back-line.

A Sullay Kaikai effort was bravely blocked by Sean Raggett, while Tom Naylor slid in to prevent Anderson capitalising on the loose ball.

Craig MacGillivray then comfortably dealt with a James Husband header after Kaikai’s corner had been flicked on for the defender.

Pompey began passing the ball around nicely as they settled into the contest, without making any inroads in the final third.

The first decent chance came at the opposite end on 24 minutes, with MacGillivray turning CJ Hamilton’s angled drive into the side netting.

As the half continued, the visitors began posing a few more problems, although could not quite find that final killer ball.

Harness did brilliantly to control Andy Cannon’s pass, only to see his attempted threaded ball for Marquis intercepted.

Their best opportunity arrived when Ethan Robson failed to clear inside his own box and Marquis dug out a shot that rolled narrowly past the post.

MacGillivray made a simple save to deny Jerry Yates as the seconds ticked away, then came quickly off his line to beat Hamilton to the ball.

Any hopes that there would be an improvement in the drama levels straight after the restart were quickly extinguished.

Instead, the game continued in niggly fashion, with plenty of appeals from both sides for free-kicks – most of which were ignored by referee Joshua Smith.

Jackett tried to inject some fresh energy into his side with a double substitution just past the hour mark.

Ben Close and Harrison were the men chosen to lift the visitors, with Cannon and Ronan Curtis making way.

Williams got himself into the path of Hamilton’s shot on 64 minutes, while Daniel Ballard was then booked for fouling Marquis as the Blues tried to launch a quick break.

But Blackpool then broke the deadlock moments later, with Yates wisely leaving Hamilton’s low centre for Anderson to drive into the net.

Cam Pring soon came on for Williams and took up residence just in front of Lee Brown on the left-hand side.

The Blues were trying to find a way back and Marquis hit two efforts off target, the second coming after Naylor had found him with a fine lofted pass.

Pompey were huffing and puffing in search of an equaliser, but Chris Maxwell was still a virtual spectator between the sticks.

Blackpool were at least forcing MacGillivray to get his gloves dirty and the keeper got down low to his right to push clear Kaikai’s shot.

The game was threatening to end with a whimper, but Marquis finally forced Maxwell into action in stoppage-time.

And after the keeper pushed away his shot, the resulting corner saw a spot of pinball in the box before the hosts were finally able to clear the danger.


Pompey dropped to sixth in the League One table after losing an uneventful game at Blackpool.


Pompey's unbeaten away league record came to an end against Blackpool at Bloomfield Road.


Sean Raggett has tipped Pompey to bounce back from their disappointing night in Blackpool.


It was a game that Pompey will want to instantly consign to the scrapheap of the season. 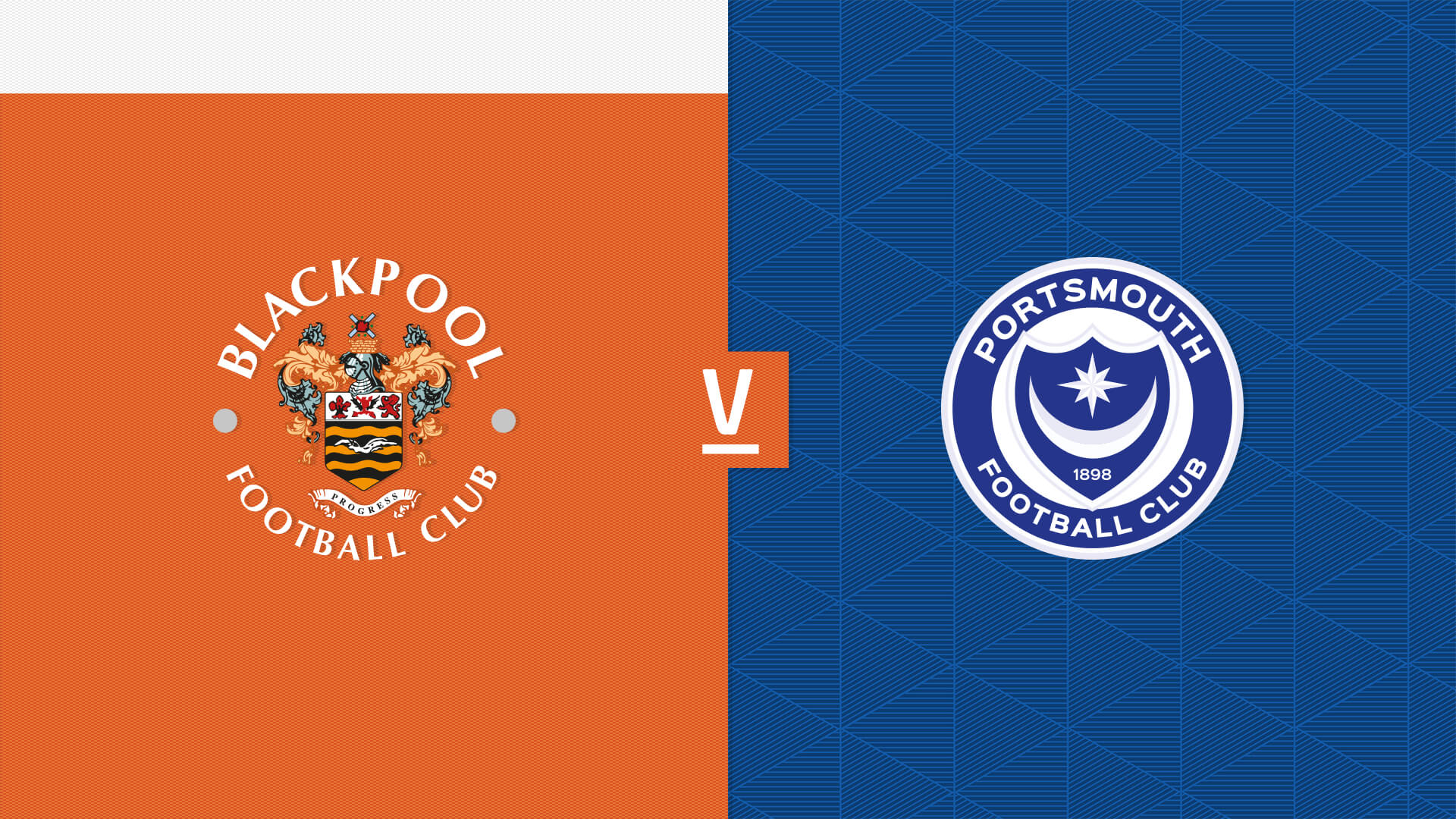 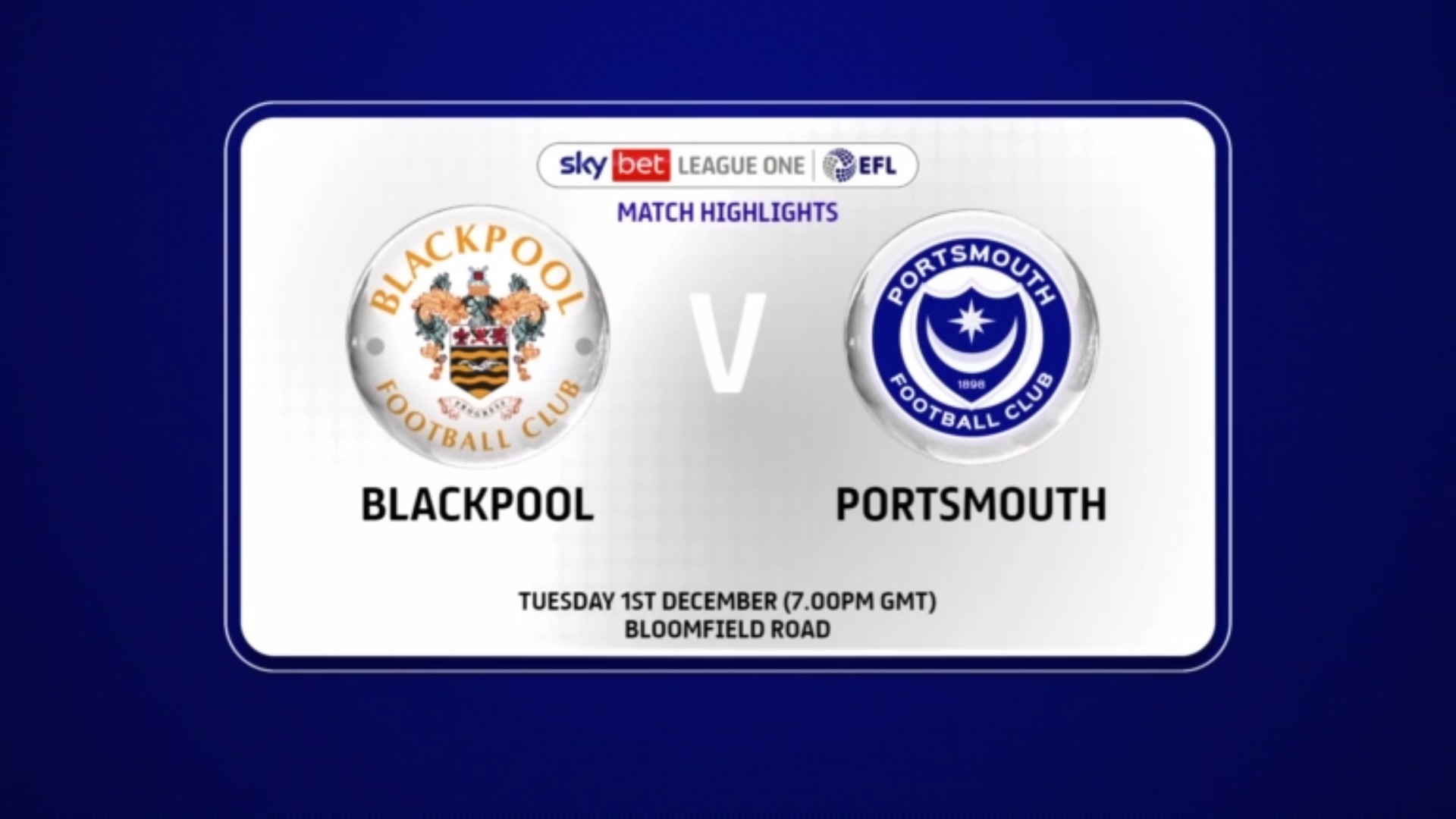 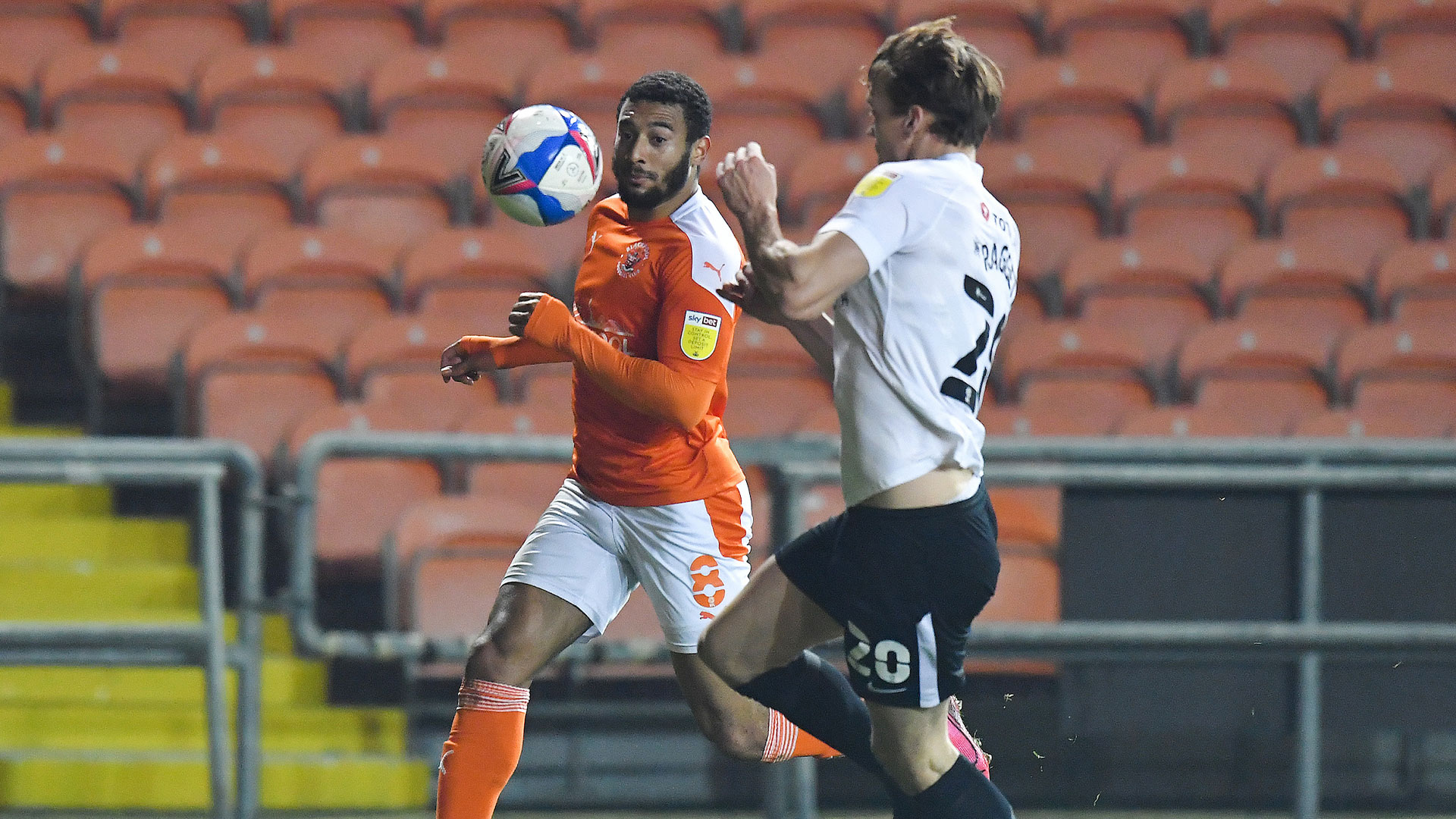