The relentless run of league fixtures takes a breather, as the Papa John’s Trophy takes centre stage this evening.

Pompey head to Whaddon Road to face League Two side Cheltenham (7pm kick-off) for a place in the third round.

It is the hosts who were seeded for the draw, however, after topping Southern Group F, ahead of Norwich’s youngsters.

They won all three of their fixtures – which also included games against Plymouth and Newport – and did not concede a single goal in the process.

Like the Blues, however, their priority will be promotion, with the Robins currently sitting second in the fourth tier standings following a thrilling 5-3 victory over Exeter at the weekend.

Fans will be hoping for a better finish than last term, when they let slip a two-goal lead from the first leg of the play-offs to suffer an aggregate defeat to Northampton.

Cheltenham have never previously lifted the EFL Trophy – in any of its guises – while Pompey are, of course, the current holders and are still waiting to play last term’s final.

The hosts are also yet to enjoy a competitive win against the Blues, although five of the previous six meetings finished all square.

And the exception to that was certainly a memorable affair, with a 6-1 triumph at Fratton Park on the final day of the 2016/17 campaign sealing the League Two title for Paul Cook’s men.

In the event of a draw after 90 minutes this evening, the tie will be decided by a penalty shoot-out.

TEAM NEWS
Pompey will make 11 changes from the side that beat Peterborough in the league on Saturday, with some youngsters set to be given a chance to impress.

Michael Jacobs has returned to training following a knee ligament injury, but this evening’s game comes too soon for the midfielder.

Cheltenham are also likely to freshen things up, with their manager Michael Duff revealing that several members of his squad are carrying knocks.

BETTING
Pompey are the 8/11 favourites with Sky Bet to progress to round three, while the hosts can be backed at evens. 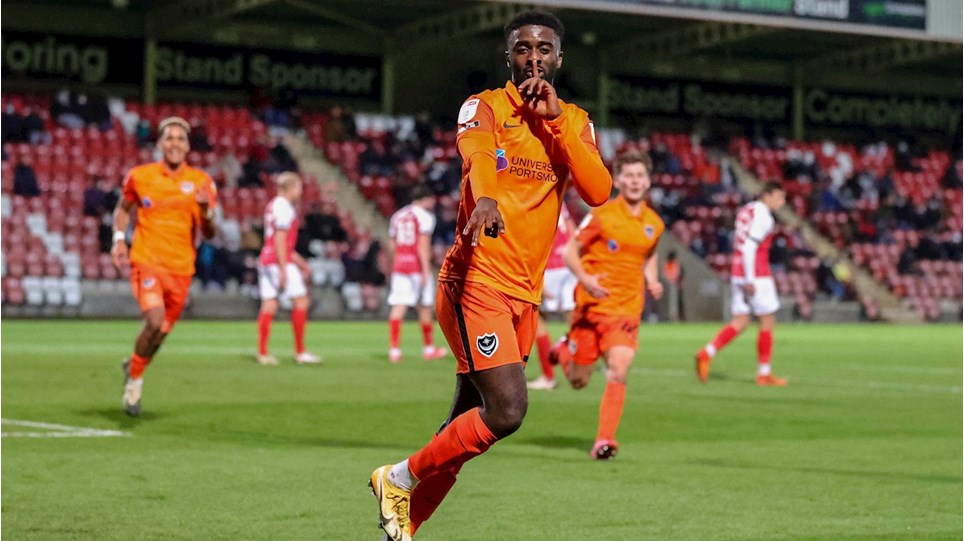 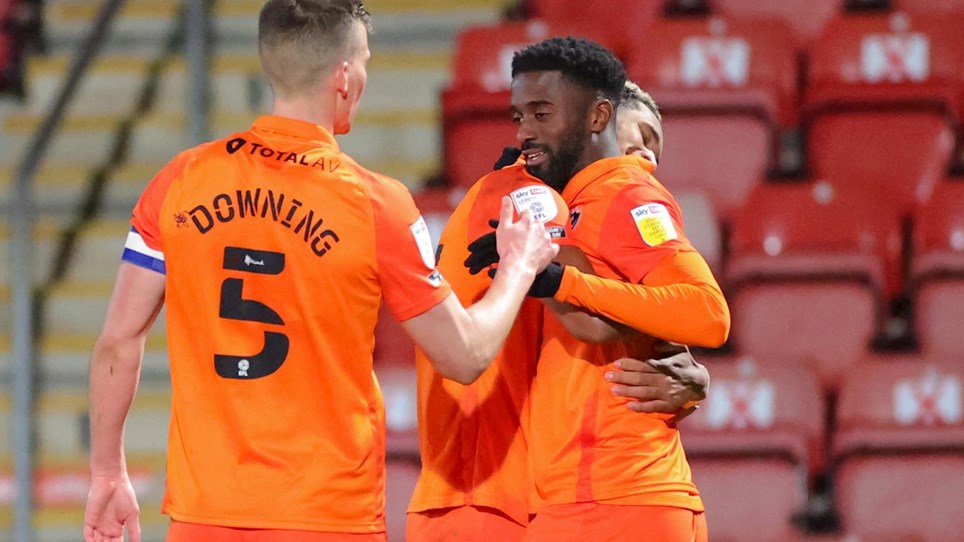 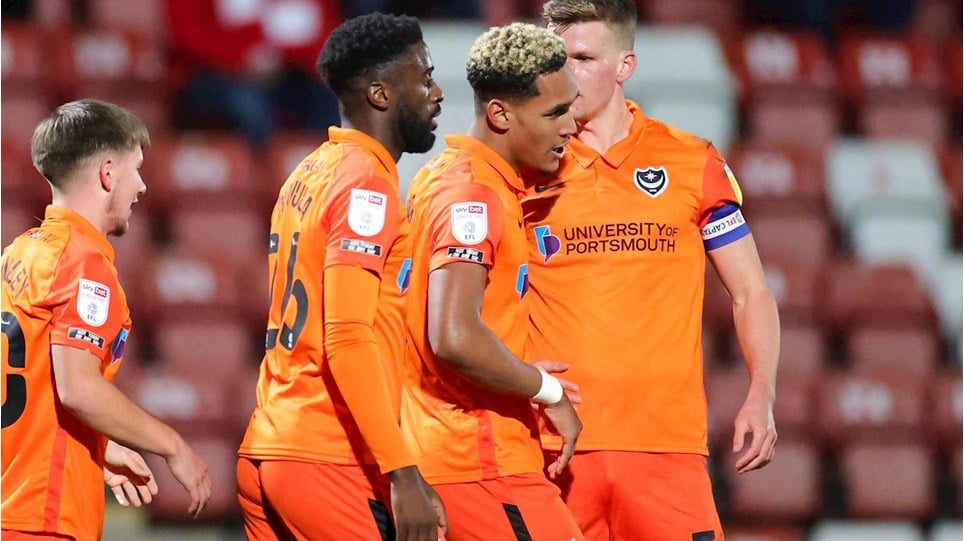 Jordy Hiwula bagged a brace as Pompey cruised to victory at Cheltenham to reach the third round of the Papa John’s Trophy.

Hiwula then took charge by scoring in each half, as the Blues continued their fine record in the competition.

Kenny Jackett made 11 changes from the side that impressively saw off Peterborough in the league at the weekend.

In fact, nobody who set foot on the Fratton turf for that fixture even made the trip to Whaddon Road.

Alex Bass returned between the sticks, behind a back three of James Bolton, Rasmus Nicolaisen and skipper Paul Downing.

Academy midfielder Charlie Bell was joined by Ben Close and Bryn Morris in the centre of the park, with Mnoga and Cam Pring out wide.

Young striker Alfie Stanley partnered Hiwula up front, with a host of teenage prospects on the bench.

The hosts threatened in the opening stages, with Downing having to head behind a dangerous cross and from the resulting corner, Ben Tozer hooked over.

But it was the Blues who broke the deadlock on 15 minutes, as Close picked out MNOGA at the back post.

The teenage wing-back cut onto his left foot and drilled a shot into the bottom corner to open his account for the club.

Hiwula might have doubled the lead soon after, but his effort took a deflection to divert the ball over the bar.

Pompey did score again on 29 minutes, though, with Pring’s delivery nodded down by Stanley for HIWULA to fire into the net.

The visitors were, as usual, looking threatening on the break and caused more problems for their opponents before the interval.

But the Robins almost reduced their deficit late in the half, as Andy Williams collected Dan Bowry’s delivery and drilled a shot narrowly past the post.

Any hopes of a Cheltenham comeback were dashed shortly after the restart when HIWULA raced onto a Morris free-kick down the line and fired in a shot that Scott Flinders was unable to keep out.

The keeper did much better moments later, though, to prevent the striker completing his hat-trick by converting Pring’s cross.

Then, from the resulting corner that was whipped into the box by Bell, a close-range Bolton header went over.

Jackett made a first change just past the hour mark and brought on Gerard Storey for his senior debut in place of Bell.

Pring then went close to increasing the visitors’ lead further with an angled volley from Mnoga’s cross that Flinders gathered at his near post.

The Robins almost pulled once back from a corner and Bolton was well placed to head the ball off the line.

But most of the action was taking place at the other end of the pitch and Flinders made a fine save to deny Downing after the skipper met Pring’s free-kick.

Seok Jae Lee replaced Stanley for his second Blues appearance, but it was a Cheltenham substitute who almost scored seconds after coming on.

The midfielder was sent haring through on goal, but wasted the opportunity by firing straight at Bass.

Hiwula was still working hard to complete his treble, although was not able to force his shot through a sea of bodies following a spot of pinball in the box.

But the Blues had already done more than enough to seal their progress and maintain their grip on the silverware. 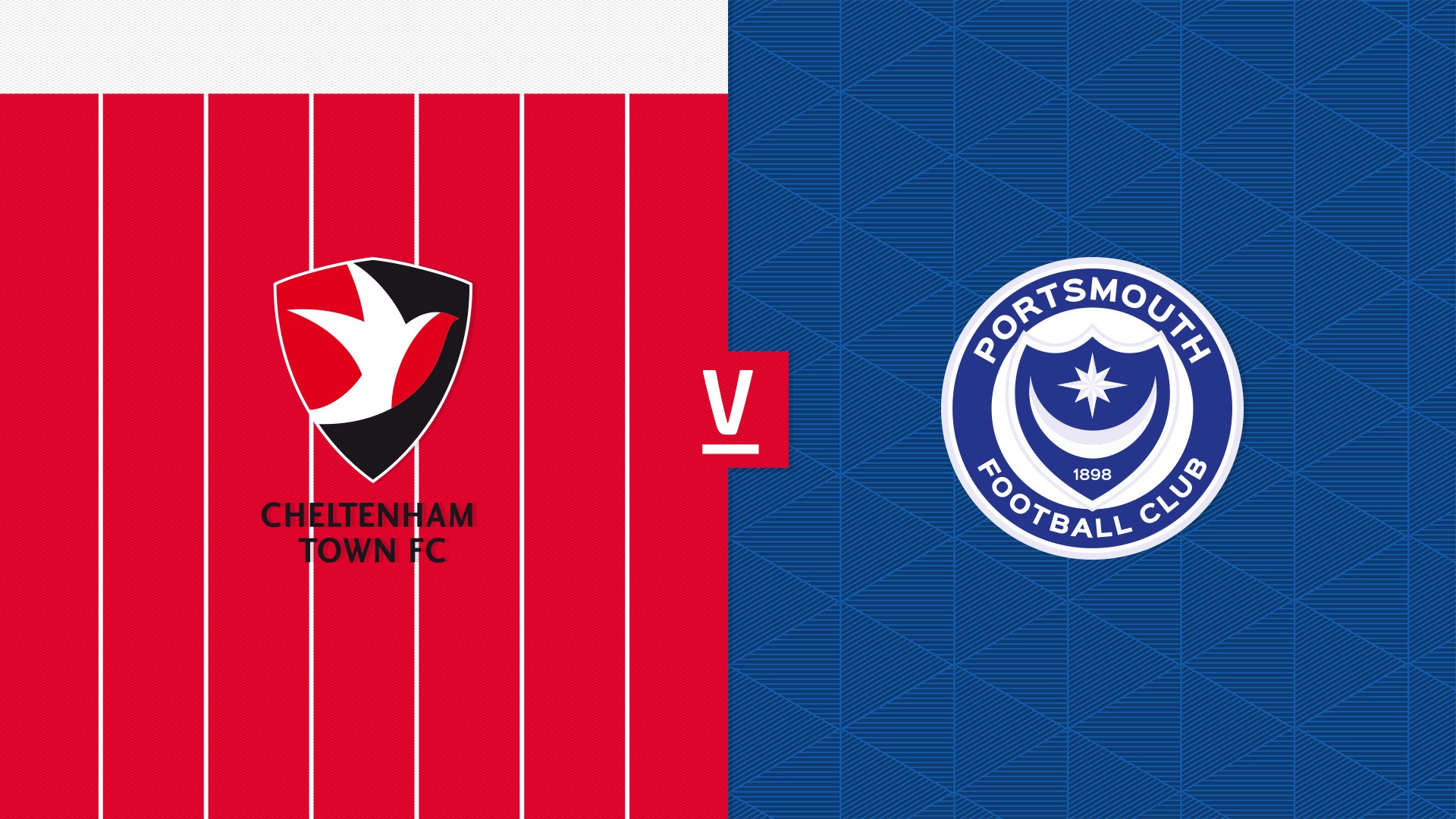 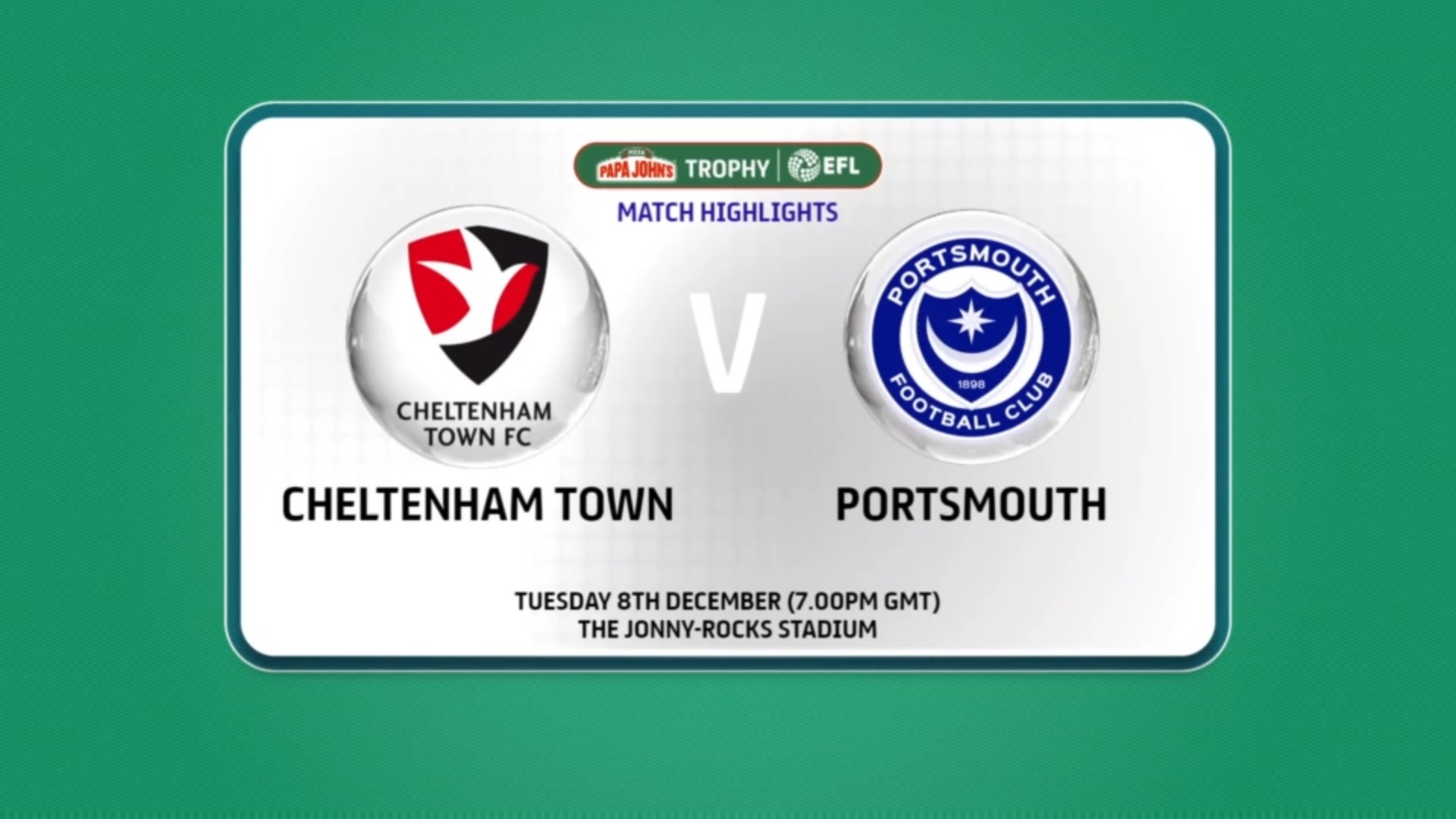 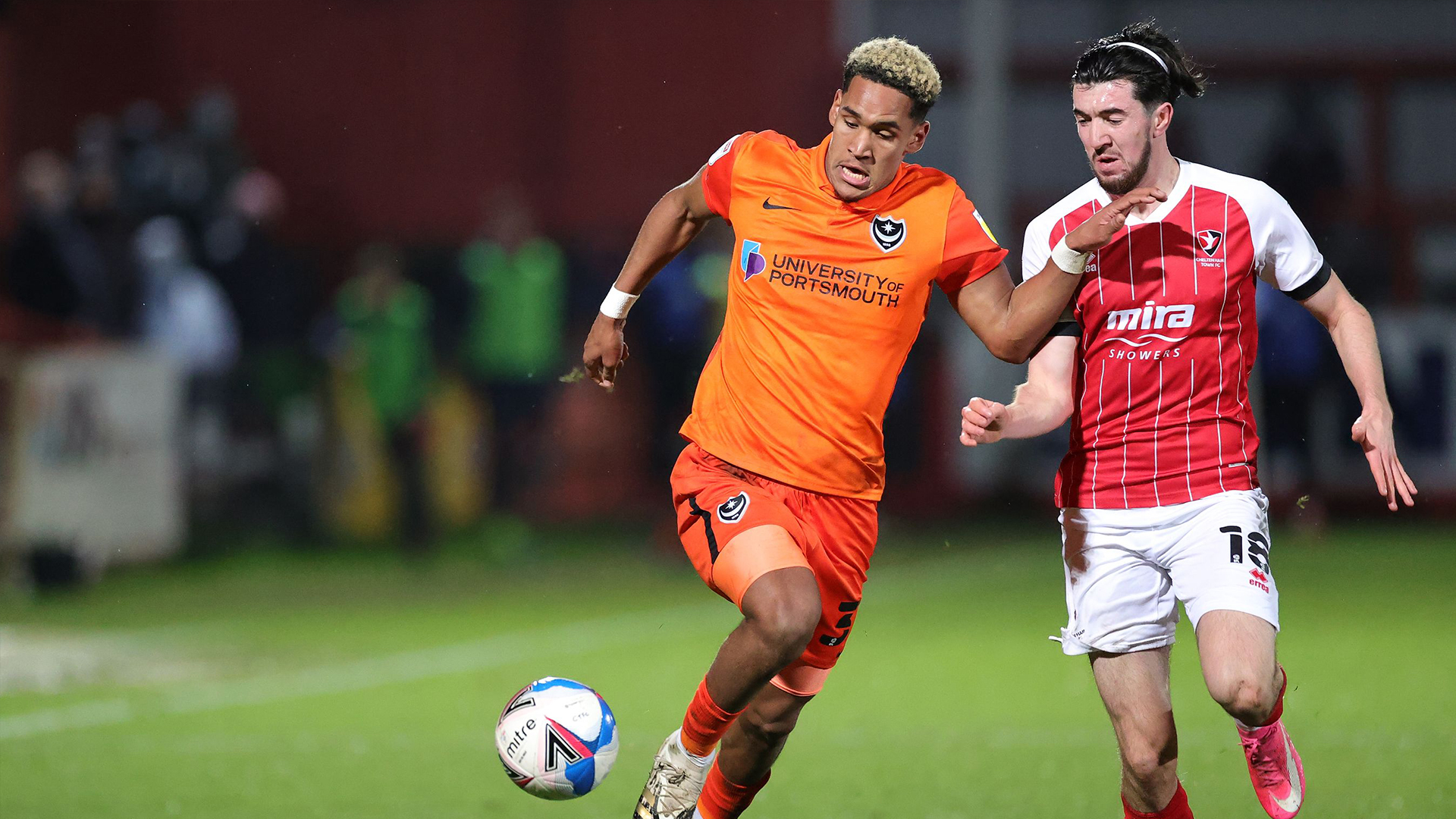