The nine-month anniversary of Pompey’s last meeting with Fleetwood passed a few days ago.

Nobody inside Fratton Park to watch a 2-2 draw that night could have known that it would be their last trip to the ground for so long.

But, three days later, the news broke that the remainder of the 2019/20 campaign would be suspended – and eventually cancelled – due to the Covid-19 pandemic.

The sides were eventually able to compete in the play-offs, with both crashing out over two legs in the semi-finals.

While Pompey cruelly lost to Oxford on penalties, the Cod Army were beaten 6-3 on aggregate by Wycombe, who ultimately claimed the final place in the Championship.

All those games – and the start to the current campaign – took place inside empty grounds in a bid to halt the spread of the virus.

Restrictions have recently eased, though, and the Blues were able to welcome back 2,000 supporters for the recent victory over Peterborough.

And it will be the same again this evening (7.45pm kick-off), as the hosts try to beat Joey Barton’s side, who sit five points behind them in ninth spot.

Pompey, meanwhile, know that a third successive league win could see them end the night at the League One summit.

Anybody attending the game should adhere to the new Supporters’ Code of Conduct and make sure to abide by social distancing measures.

TEAM NEWS
Lee Brown is set to be about for between two and three weeks with a hamstring injury, but Pompey have no other injury concerns.

Defender Tom Edwards missed Fleetwood’s game on Saturday with a knock, while goalkeeper Joel Coleman (hamstring) is a long-term absentee.

VIEW FROM THE DRESSING ROOM
Read the thoughts of Kenny Jackett and Ronan Curtis ahead of the game.

Subscribers will, as usual, be able to listen to listen to live commentary from Andy Moon and Guy Whittingham by signing into their account and visiting the match centre from 7pm.

PROGRAMME
Tonight’s programme can be bought online here or by visiting the club shop in Anson Road for £3.50.

Supporters attending the game can also purchase a copy from the Victory Lounge (if seated in the Fratton End), kiosk (Milton End) or catering area (North Stand).

BETTING
Pompey are the 9/10 favourites with VBET to secure all three points, while the visitors can be backed at 16/5. 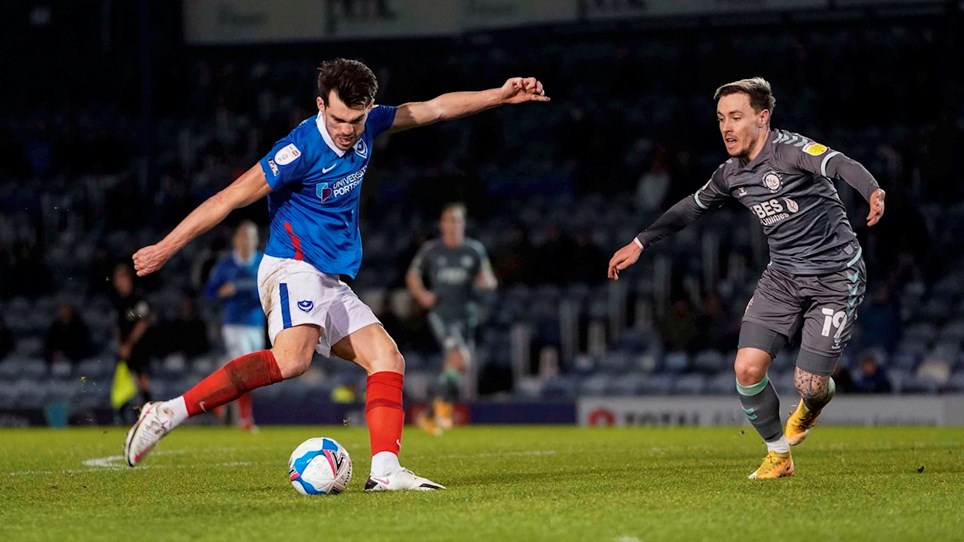 
Pompey were held to a draw by Fleetwood to miss out on claiming top spot in League One.


Thank you to all supporters who entered Tuesday’s half-time draw, helping to raise funds for the academy and Pompey in the Community. 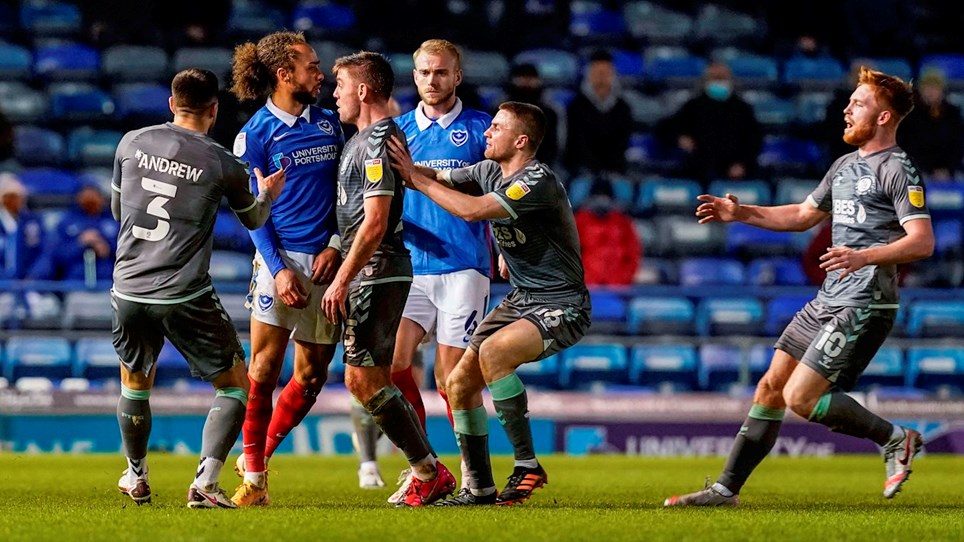 
Pompey climbed up to second in the table after drawing with Fleetwood at Fratton Park. 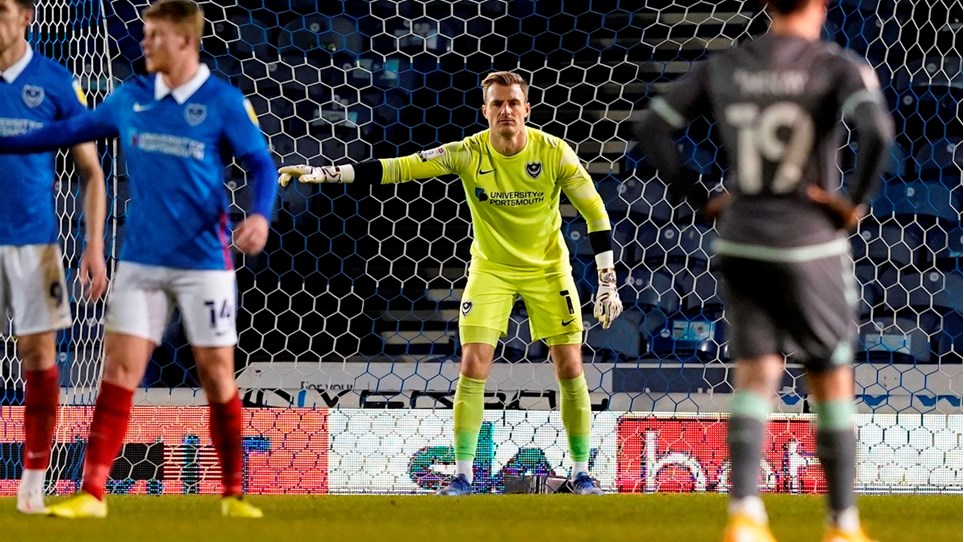 Pompey missed out on snatching top spot in League One after being a held to a goalless draw by Fleetwood.

They looked the more likely side to score in a fractious affair, but could not break down their stubborn opponents.

And Craig MacGillivray then had to make a superb save right at the death to stop the Blues ending up with nothing.

Kenny Jackett made one enforced change from the side that eased to victory at Ipswich at the weekend.

Lee Brown injured his hamstring in that contest, so Cam Pring came in to replace him at left-back, with a space opening up for Haji Mnoga on the bench.

The contest was a bad-tempered affair before the break, with referee Alan Young having to dish out seven yellow cards – and it could have been more.

Both sides had certainly looked threatening going forward in the opening stages, without either goalkeeper being tested.

That changed on 12 minutes, however, as Jack Whatmough’s long ball was nodded down by John Marquis and Ronan Curtis hit a fierce low shot that was well saved by Jayson Leutwiler.

MacGillivray was then called into action at the other end, getting down to deny Wes Burns following good work from Danny Andrew and Paddy Madden.

But the Blues immediately launched a quick break and Leutwiler was again in top form to keep out a deflected Ryan Williams drive.

Curtis was the man into Young’s book for a foul and Whatmough soon followed him following a challenge on Sam Finley.

Madden, bizarrely, felt the punishment should have been more and his over-the-top remonstrations were also punished by a booking.

Williams and Marcus Harness were next to be carded, as the contest threatened to boil over and the man in black struggled to keep control.

Andrew and Burns also saw yellow as the half drew to a close, but there was almost something better to celebrate just before the break.

Leutwiler did well to adjust his feet and stop the ball crossing the line when Harness’ cross took a deflection and drifted towards the net.

There was a similarly frenetic start to the second period and Pompey were first to go close when a corner was only partially cleared.

The defenders stayed up for when the ball was pumped back into the mixer, but Whatmough could not connect when Sean Raggett headed it across to him.

Jackett made his first change on the hour mark, with Ellis Harrison replacing Williams to join Marquis up front.

Tempers had calmed a bit since the restart, but the game had turned into a scrappy encounter, with both sides struggling to maintain possession.

Pompey were looking fairly controlled, though, and a moment of quality saw them come close to breaking the deadlock.

Curtis collected the ball on the left and played a neat one-two with Marquis before hitting a low shot that fizzed just past the post.

The referee was then the centre of attention again, awarding a back-pass against Fleetwood, but changing his mind after learning from his assistant that the ball came off the defender’s knee.

A second change followed for Pompey on 74 minutes, with Michael Jacobs replacing Curtis wide on the left.

The hosts were showing more ambition as the seconds ticked down, but Fleetwood were proving a difficult nut to crack.

A ball into the box from Jacobs caused problems, though, and when it was only half cleared, a Marquis follow-up was deflected wide.

And a large percentage of those inside the ground thought there was a winner on 85 minutes after Harness had stolen possession.

He burst forward and hit a fierce strike that rippled the net – but, unfortunately, it was the outside of the goal.

Fleetwood almost snatched it at the death, though, with MacGillivray doing brilliantly to deny substitute James Hill from point-blank range.


Pompey were held to a draw by Fleetwood to miss out on claiming top spot in League One.


Thank you to all supporters who entered Tuesday’s half-time draw, helping to raise funds for the academy and Pompey in the Community.


Pompey climbed up to second in the table after drawing with Fleetwood at Fratton Park. 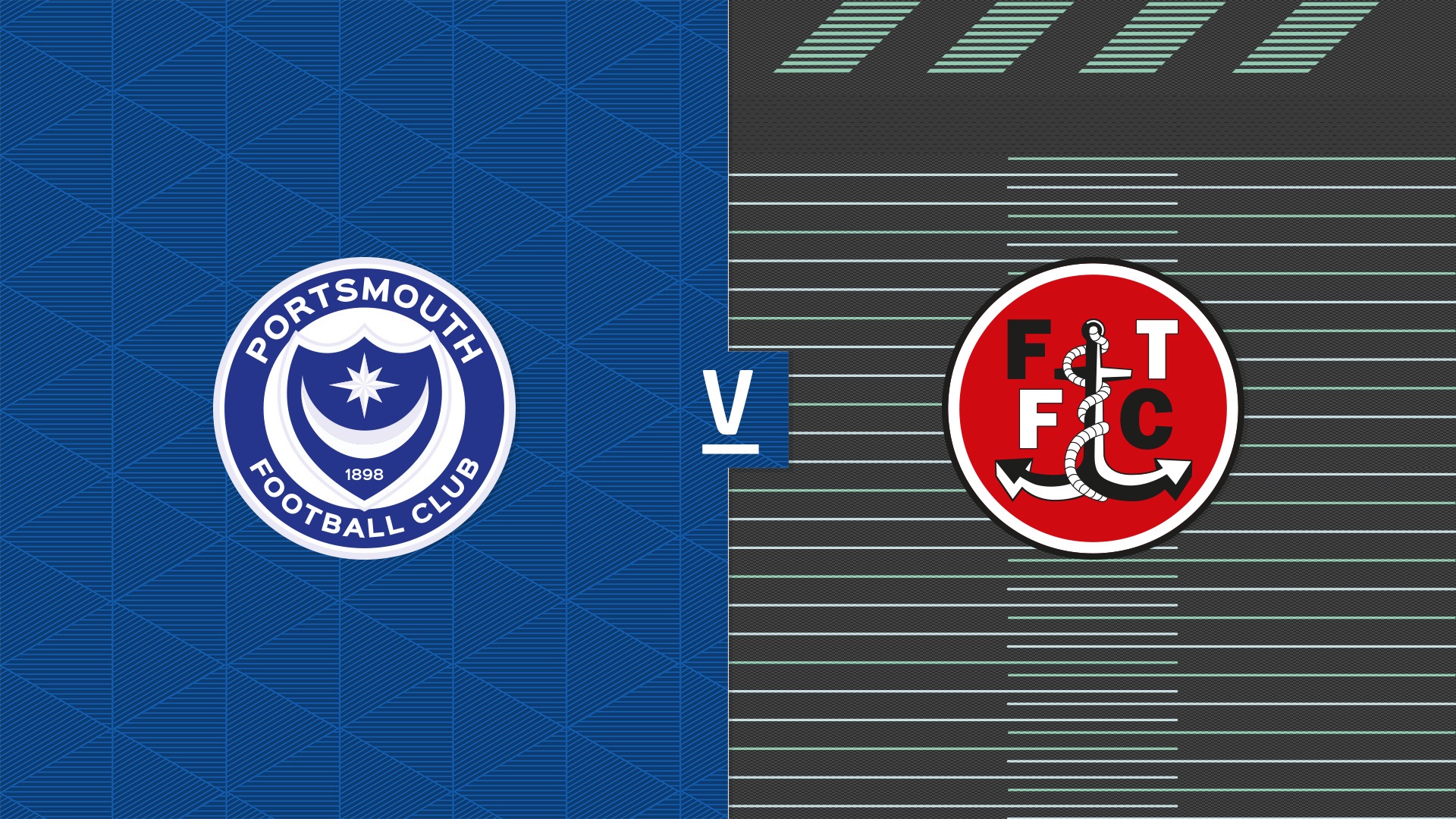 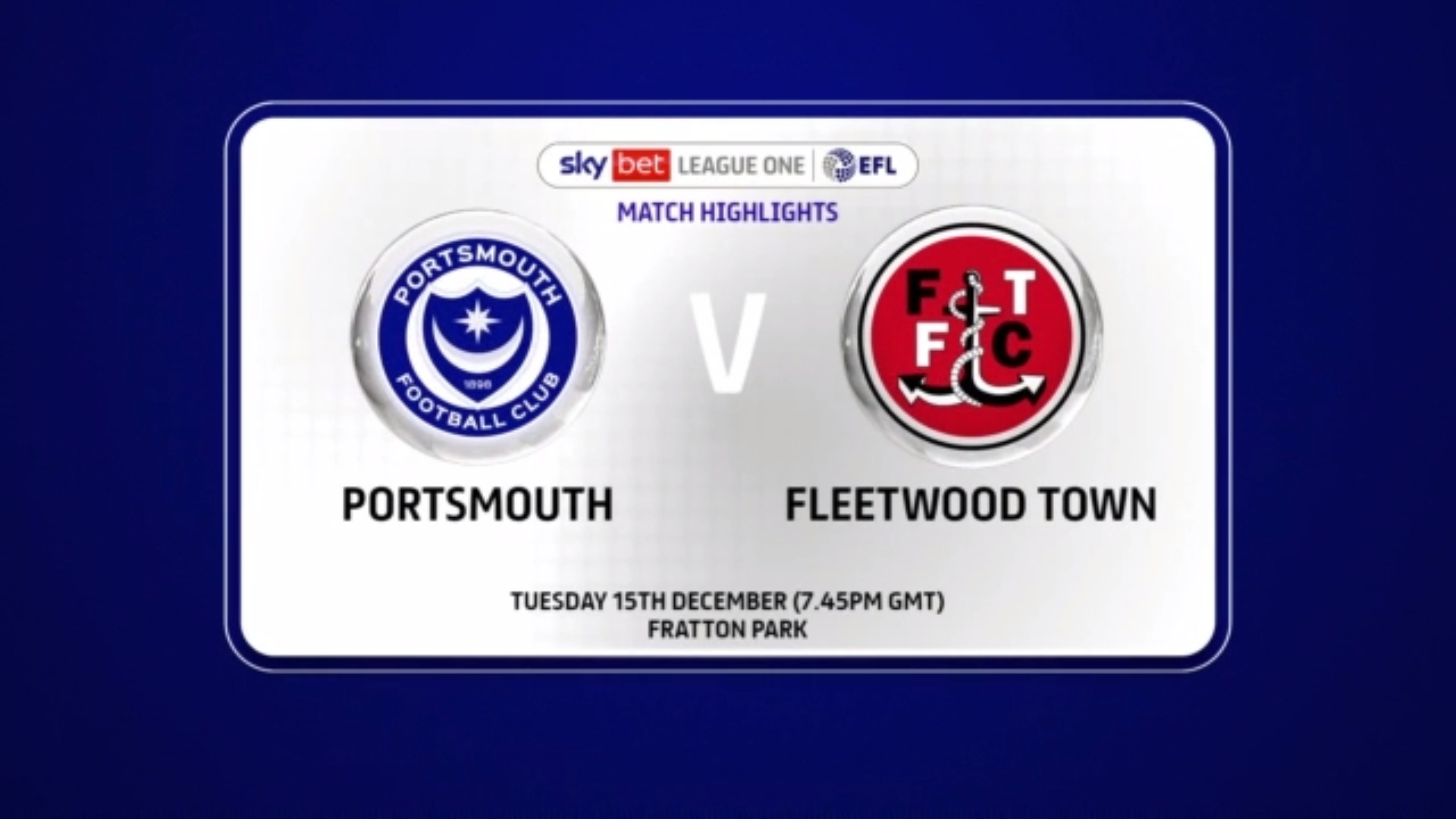 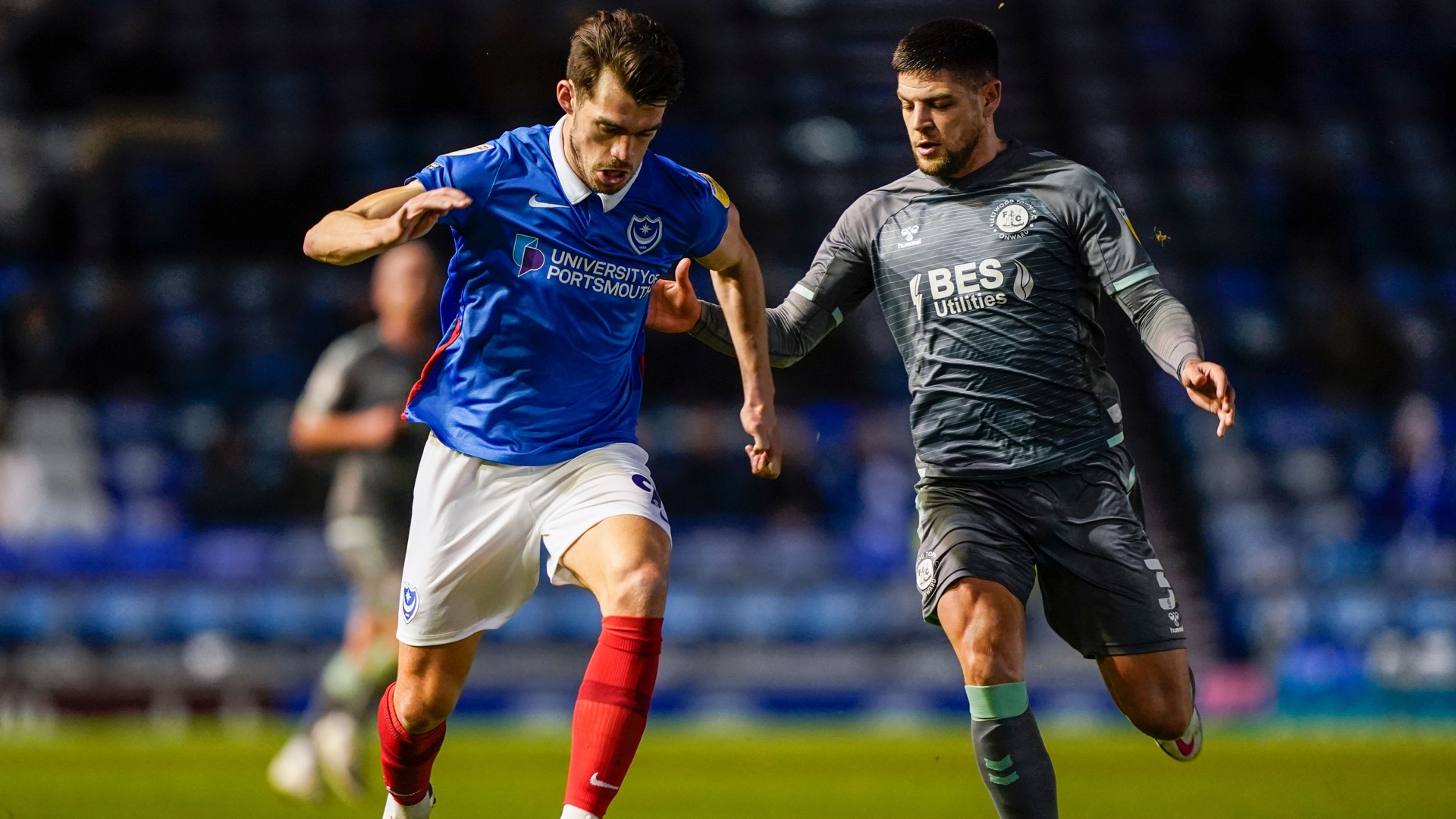