It is approaching nine months since Pompey fans were last allowed to attend a game at Fratton Park.

But there will be 2,000 spread out across the Fratton End, North Stand and Milton End for Saturday’s clash with Peterborough.

And those lucky enough to be able to attend will be witnessing a clash between two of the division’s entertainers.

No side in League One has netted more than Pompey’s haul of 26 goals, while Peterborough are a couple behind on 24.

But both sides come into the contest on the back of midweek defeats, with Kenny Jackett’s side losing an uneventful contest at Blackpool and their next opponents beaten at AFC Wimbledon.

And despite Posh’s position of third in the table, they are currently on a poor run of form, having lost three of their past four league games.

Also included in that run was one of the shocks of the FA Cup second round, as sixth tier Chorley were 2-1 victors at London Road last weekend.

Darren Ferguson’s men may still feel a sense of injustice about how the 2019/20 campaign ended, with Wycombe pushing them out of the play-offs when the standings were adjusted for points per game.

They took four points against the Blues last term, with Lee Brown and Ellis Harrison on target for the hosts in a 2-2 draw at Fratton Park.

TEAM NEWS
Michael Jacobs (knee) is the only player currently missing for Pompey, but the midfielder is expected to return to training soon.

Dan Butler is sidelined for the visitors with a calf problem, although fellow former Fratton full-back Nathan Thompson is expected to feature.

Peterborough will also be without Ricky-Jade Jones (leg) and Joe Ward (knee), but leading marksman Jonson Clarke-Harris returned to the side in midweek.

MATCHDAY INFO
A minute’s applause will take place before kick-off in memory of Papa Bouba Diop, who sadly passed away last week.

Supporters attending the game are expected to adhere to the new Code of Conduct.

A programme will be available to buy for £3.50 and is also available from the Anson Road shop. You can also buy copies online here.

BETTING
Pompey are the 6/5 favourites with Sky Bet to secure the victory, while the visitors can be backed at 2/1. 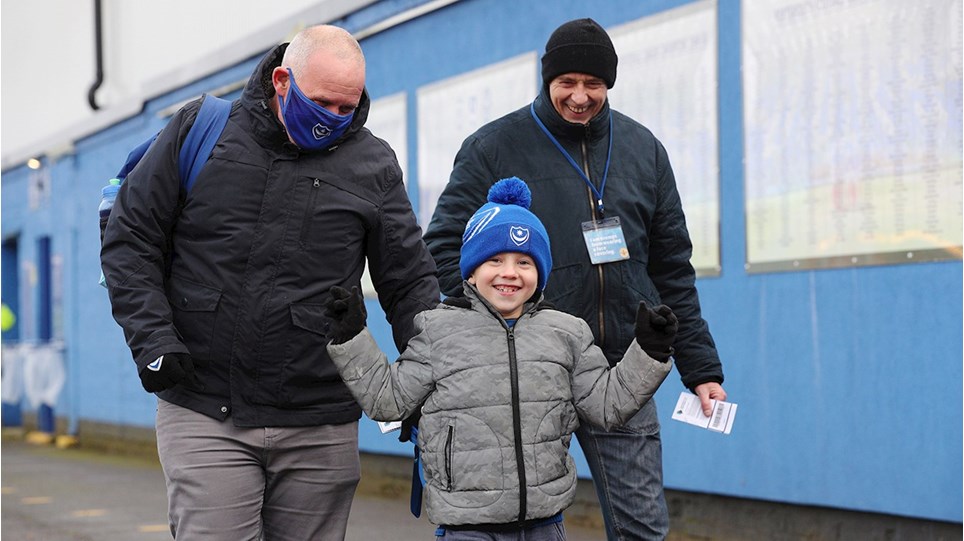 
After nearly nine months away, supporters were finally welcomed back to PO4 for Saturday’s League One clash with Peterborough. 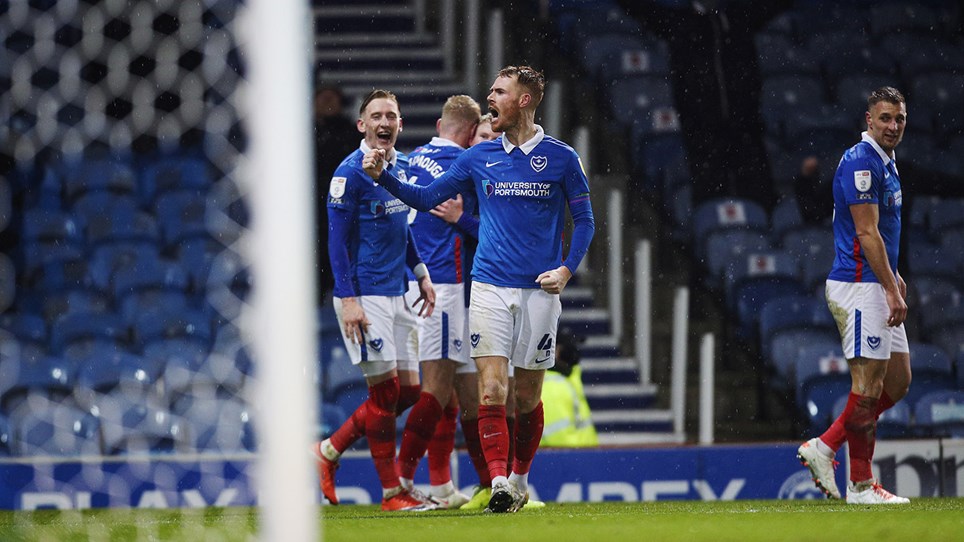 
Pompey leapfrogged Peterborough in the League One table after comfortably beating their promotion rivals. 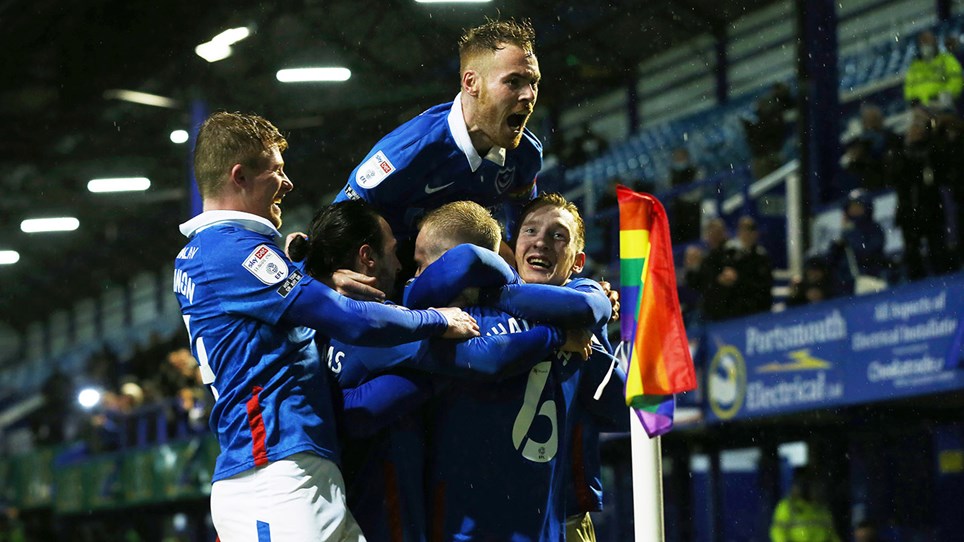 
Pompey produced one of their best performances of the season to see off Peterborough at Fratton Park.


Jack Whatmough’s baby daughter will not remember too much about her first trip to Fratton Park.

Pompey celebrated the return of fans to Fratton Park with a convincing victory over promotion rivals Peterborough.

They dominated for much of the contest on a wet and windy south coast, but could not find a breakthrough before the interval.

Jack Whatmough finally broke the deadlock, though, and a Tom Naylor special made sure the points were safe.

It was a result that was gleefully welcomed by 2,000 Blues fans, who had waited almost nine months to see their side in action.

Kenny Jackett stuck with the same side that had been narrowly beaten at Blackpool earlier in the week.

There was a minute’s applause before kick-off in memory of Papa Bouba Diop, who tragically passed away last weekend at the age of just 42.

When the action started, Pompey looked bright in and out of possession and passed the ball around nicely.

But for all their neat play in the centre of the pitch, they were unable to test Christy Pym between the sticks.

Siriki Dembele went close for the visitors in the early stages with a long-range effort that flew not too far wide of the post.

The Blues were sending in plenty of deliveries at the other end, but Posh were defending them well, with striker Jonson Clarke-Harris coming back to good effect to deal with corners.

Former Fratton full-back Nathan Thompson was then forced into a hurried clearance to prevent Lee Brown from pouncing after Ryan Williams’ low centre had been flicked on by John Marquis.

Peterborough came close to scoring against the run of play on 34 minutes after Whatmough had sliced a clearance.

That sent Dembele through on goal, but Craig MacGillivray was off his line quickly to deny the forward.

The hosts soon had an opening of their own when Ronan Curtis stole possession and fed Williams, whose angled drive flew narrowly past the post.

Pompey broke menacingly from a Posh corner early in the second half and Curtis burst away from inside his own half.

But the winger was cynically brought down by Thompson, who was deservedly shown the game’s first yellow card.

Marcus Harness then lifted the ball into the mixer and Williams had space to rise unmarked, but sent his header wide.

The Blues were certainly posing a threat and Frankie Kent did well to deny Curtis, who also skewed a shot wide from Callum Johnson’s cross.

Williams then outfought Fraser Blake-Tracy and fired in a shot that was parried by Pym, only for Curtis to fire the loose ball wide.

But the hosts finally made their pressure count just past the hour mark after Blake-Tracy had been booked for a foul on Johnson.

Brown swung in the free-kick from the right and WHATMOUGH rose above Kent to emphatically head home.

The visitors responded with a triple substitution, but soon found themselves further behind thanks to a moment of magic from the skipper.

NAYLOR, who headed a corner over a few moments earlier, received a pass from Andy Cannon 30 yards out and hit a rocket into the top corner to continue his recent goalscoring form.

It was still the Blues looking more likely to add to the scoring and Curtis sent a long-range free-kick dipping onto the roof of the net.

And, with the rain continuing to fall, they saw the contest out with relative ease, much to the delight of those in the stands.


After nearly nine months away, supporters were finally welcomed back to PO4 for Saturday’s League One clash with Peterborough.


Pompey leapfrogged Peterborough in the League One table after comfortably beating their promotion rivals.


Pompey produced one of their best performances of the season to see off Peterborough at Fratton Park.


Jack Whatmough’s baby daughter will not remember too much about her first trip to Fratton Park. 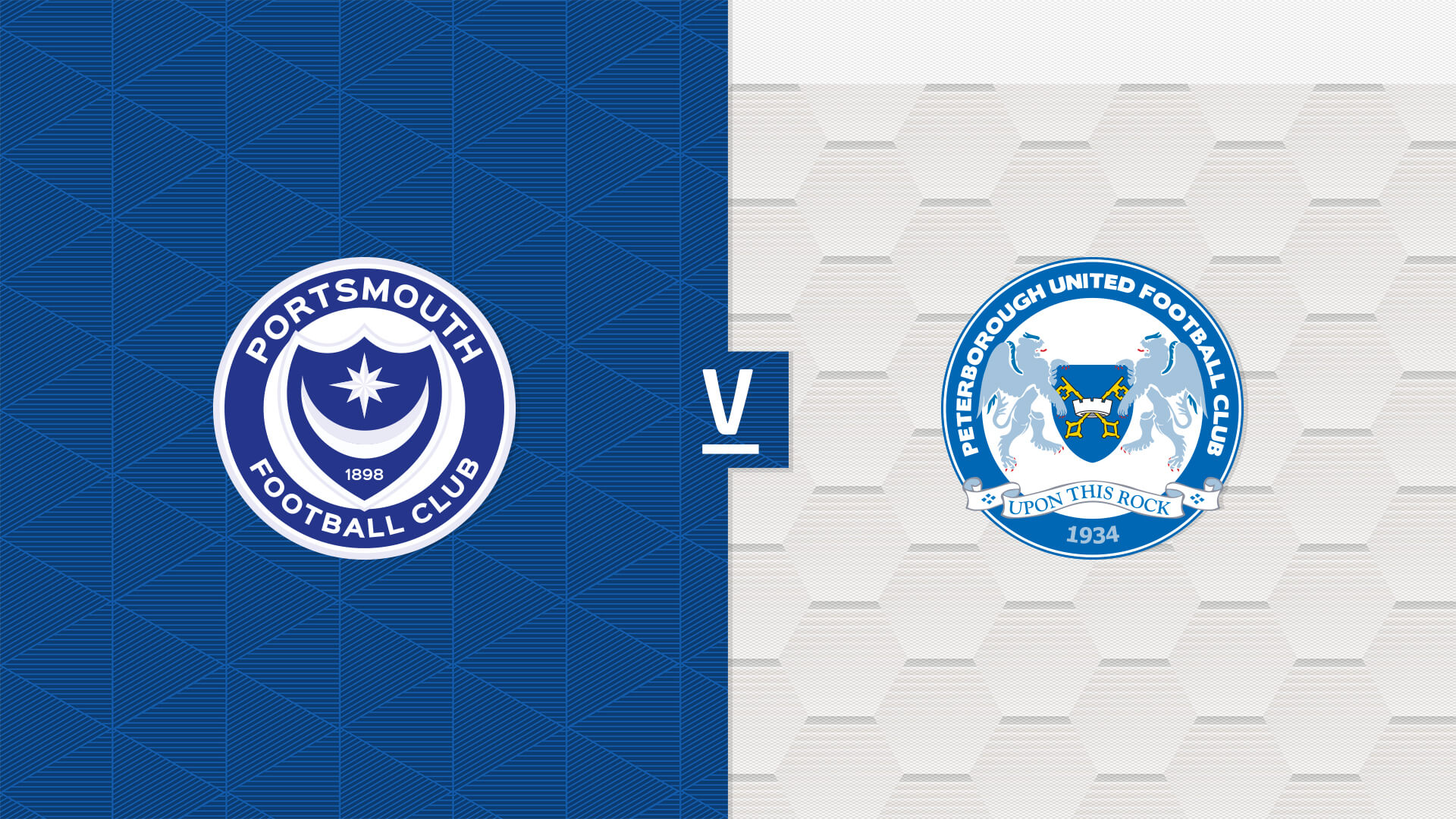 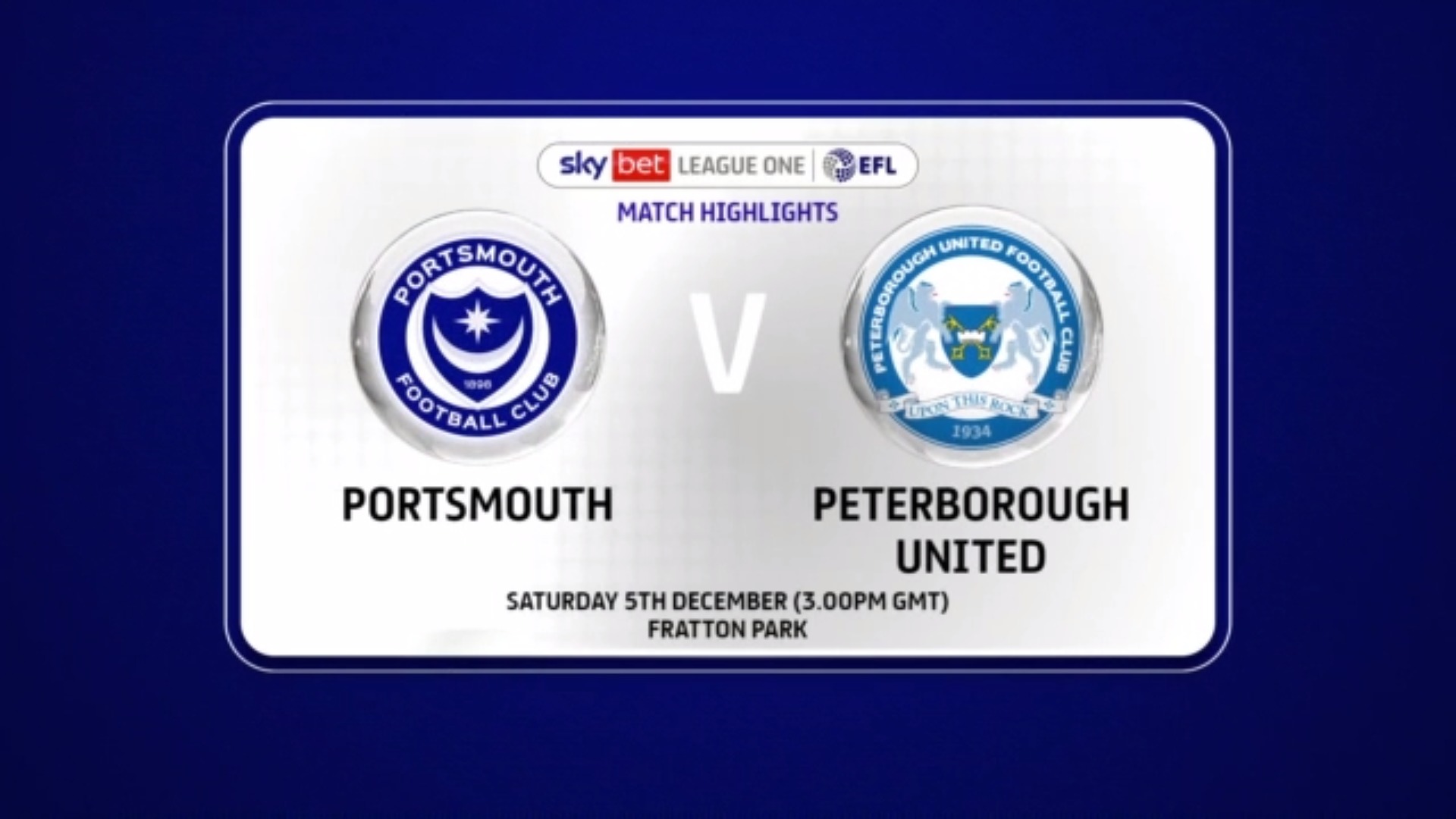 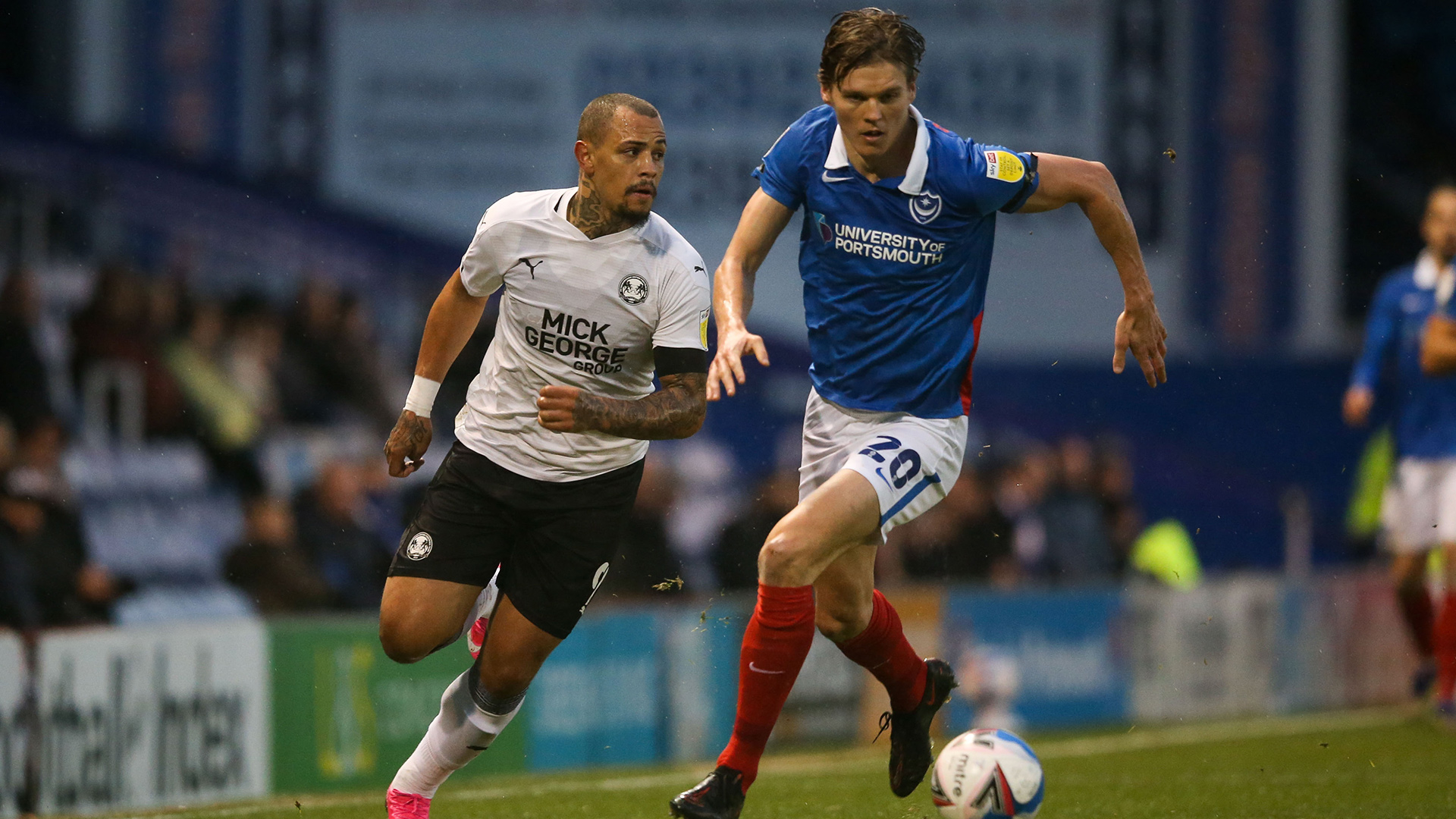