Despite not playing last weekend and losing on Tuesday night, Pompey remain fourth in the League One standings.

But they will be looking for an instant return to winning ways against Blackpool in order to keep pace with the top two.

Their opponents are 14th in the table and eight points adrift of the play-off places, with as many as three games in hand on the sides around them.

Neil Critchley’s men have won three of their past four fixtures – a run that began with a 5-0 rout of Wigan.

That result is one of four victoriess on the road for the Seasiders, who have also collected a maximum haul at Burton, Peterborough and neighbours Fleetwood.

They also caused an FA Cup upset last month by knocking out Premier League side West Brom on penalties at Bloomfield Road, only to exit at the hands of Brighton in the fourth round.

The Covid-19 pandemic meant that there was no south coast meeting between the teams last season.

Blackpool won 1-0 on their most recent visit to Fratton Park in January 2019 and also triumphed by the same scoreline on their own patch a few months ago.

Blackpool defender Marvin Ekpiteta will miss out after being sent for a scan on a troublesome hamstring problem.

VIEW FROM THE DRESSING ROOM
Read the thoughts of Joe Gallen and George Byers ahead of the game. 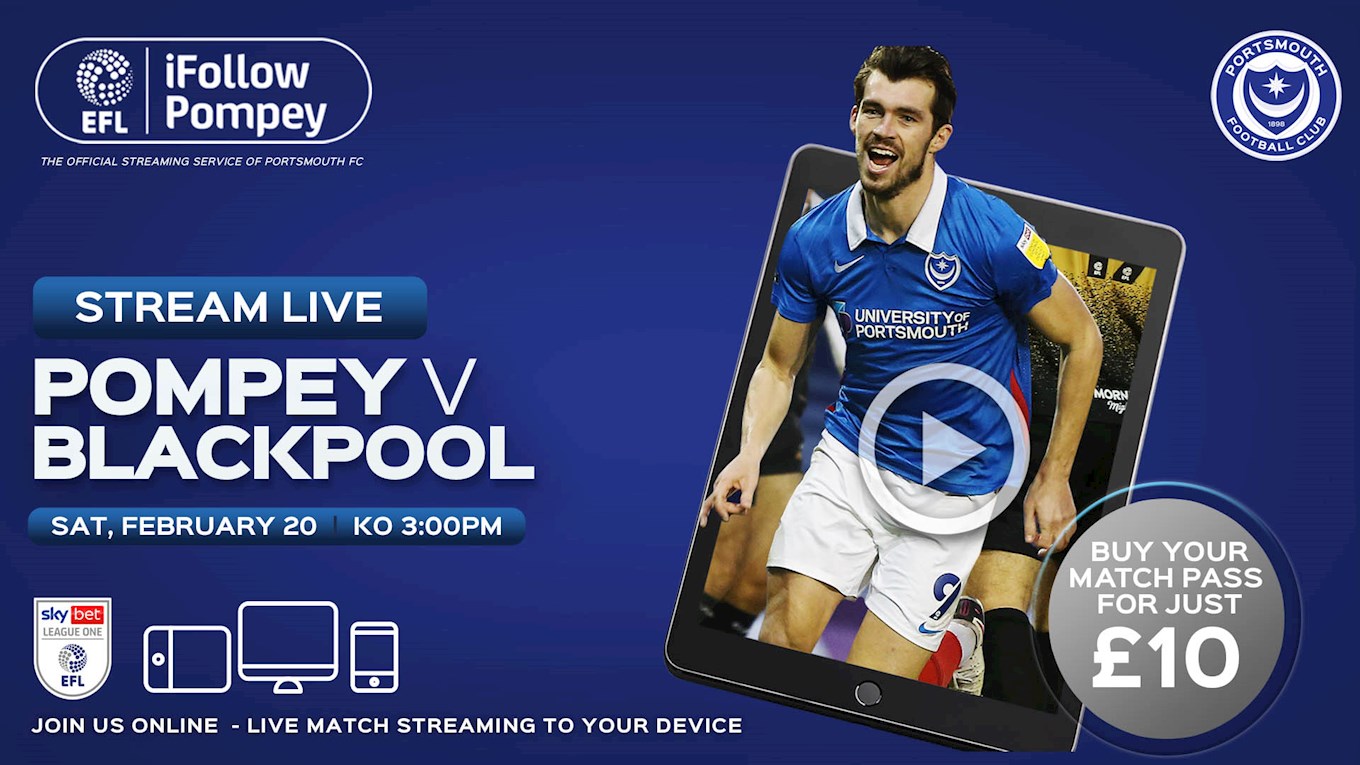 BETTING
Pompey are the 11/10 favourites with VBET to secure all three points, while the visitors can be backed at 5/2. 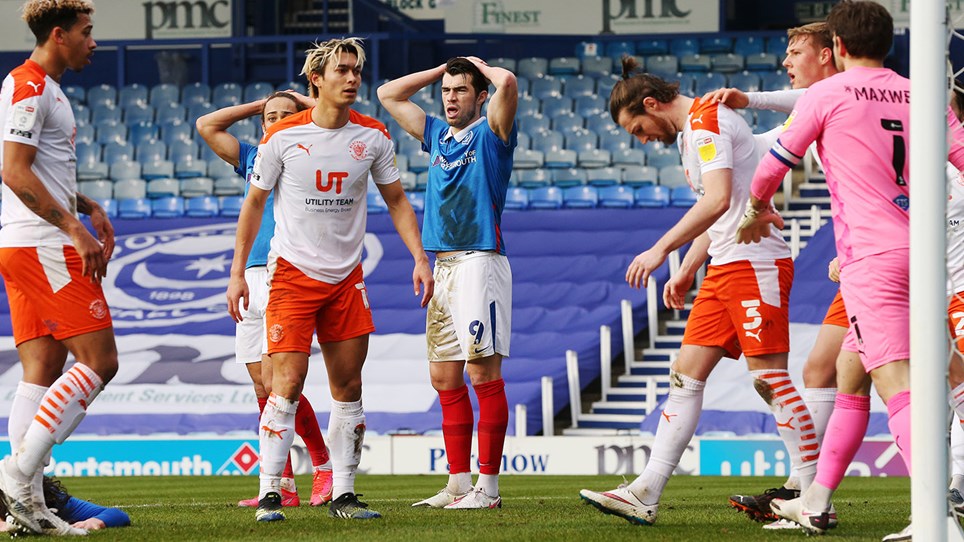 
Pompey dropped one place to fifth in the League One table after suffering a home defeat to Blackpool. 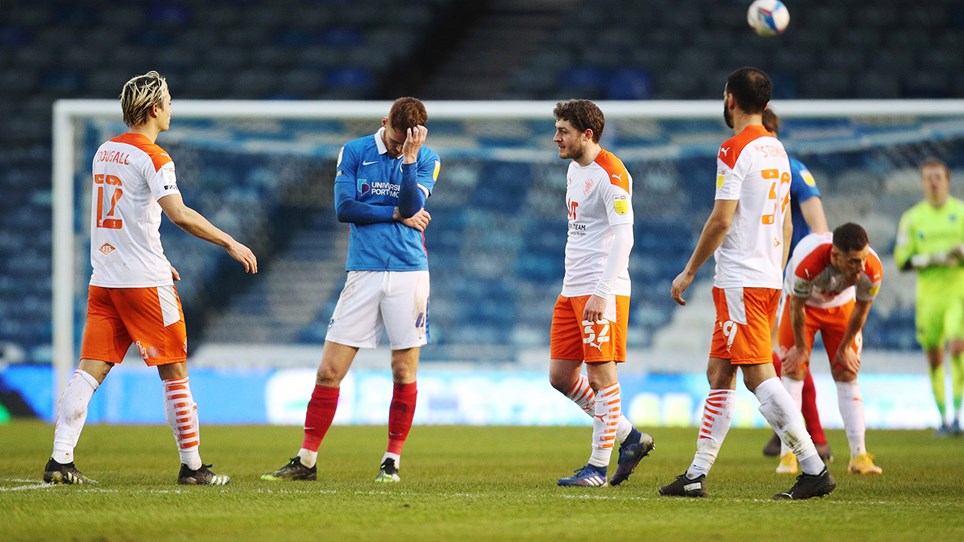 
Pompey suffered back-to-back league defeats for just the second time this season after losing an uneventful clash with Blackpool. 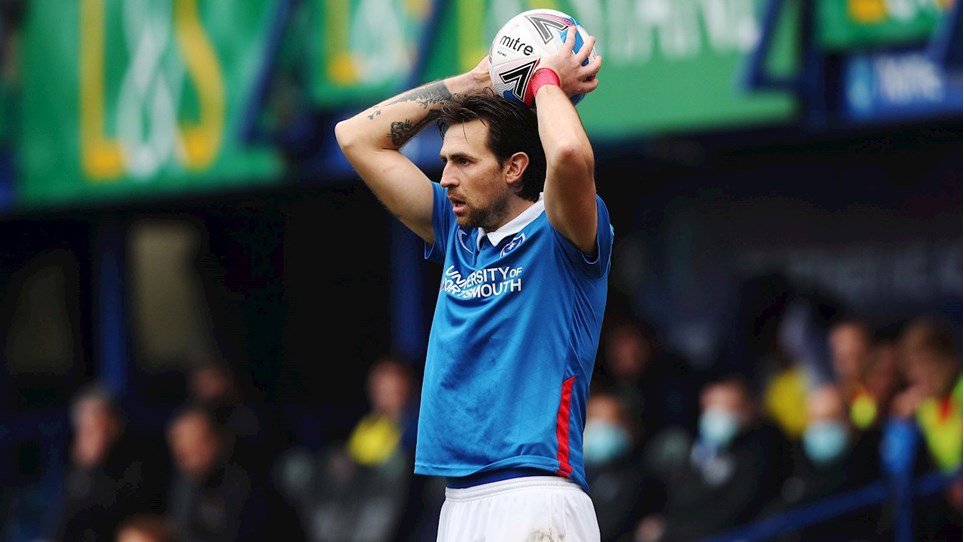 Daniels: Things Have To Change Quickly Pompey were caught by a late sucker punch, as Blackpool claimed all three points in a dull contest at Fratton Park.

The hosts controlled possession, but aside from a Rasmus Nicolaisen effort that was cleared from the line, rarely threatened to score.

It was equally uneventful at the other end of the pitch, but Jerry Yates found the target in the closing stages to ensure the Blues’ promotion bid stuttered again.

There were two changes from the side that were beaten on the road against Bristol Rovers earlier in the week.

Marcus Harness and Nicolaisen both came into the starting line-up, with George Byers dropping to the bench and James Bolton missing out with a knock.

Much like the reverse fixture earlier in the season, the first half was extremely short on clear-cut opportunities.

But there was almost an early opener for the visitors after Craig MacGillivray got down to parry clear Ellis Simms’ angled drive.

The ball ran did not run safe, though, and with Yates about to tuck it away, Charlie Daniels slid in to make a crucial block.

Nicolaisen then tried to reach a corner from the left-back at the other end of the pitch, but was only able to nod wide.

The visitors were unhappy with some of the decisions from the referee, with Luke Garbutt particularly aggrieved to be shown a yellow card following a late challenge on Ronan Curtis.

Pompey were growing into the contest and were left wondering how they failed to take the lead on 29 minutes.

Curtis swung a free-kick into the box from wide on the right and Harness’ first time effort was blocked by Garbutt.

But he was able to collect the loose ball and tee-up Nicolaisen, whose goal-bound effort was cleared from the line by James Husband.

It was the Blues looking the more likely to break the deadlock as the interval approached, although the final pass was lacking.

Sean Raggett was not quite able to make a clean contact with an ambitious over-head effort, while a dangerous Ryan Williams delivery would not land for a team-mate.

The game failed to explode into life after the restart, with Pompey seeing plenty of the ball, but unable to break through the Blackpool back-line.

Neither side were providing much of an attacking threat, with the underworked keepers probably glad that it was a fairly mild February afternoon.

The first change arrived just past the hour mark, with Byers on for Harness to provide the hosts with some fresh impetus.

Curtis sent a decent cross into the box soon after, but it was Husband who got there first to head clear.

But for all of the possession the Blues were having, they were not able to find a path through to Maxwell’s goal.

A double switch arrived in an attempt to change that on 77 minutes, with John Marquis and Williams replaced by Ellis Harrison and Jordy Hiwula.

Blackpool had not caused any problems, but launched a quick break moments later and MacGillivray dived to his right to parry clear Elliot Embleton’s curler.

The danger was not over, however, and the keeper recovered swiftly to also repel the follow-up attempt from Garbutt.

But he could not stop Yates from breaking the deadlock on 82 minutes, with the striker running half the length of the pitch, side-stepping a challenge and drilling a shot into the bottom corner.

Blackpool tried to use up as much time as possible as the seconds ticked down and Pompey were unable to find an equaliser.


Pompey dropped one place to fifth in the League One table after suffering a home defeat to Blackpool.


Pompey suffered back-to-back league defeats for just the second time this season after losing an uneventful clash with Blackpool.

Daniels: Things Have To Change Quickly 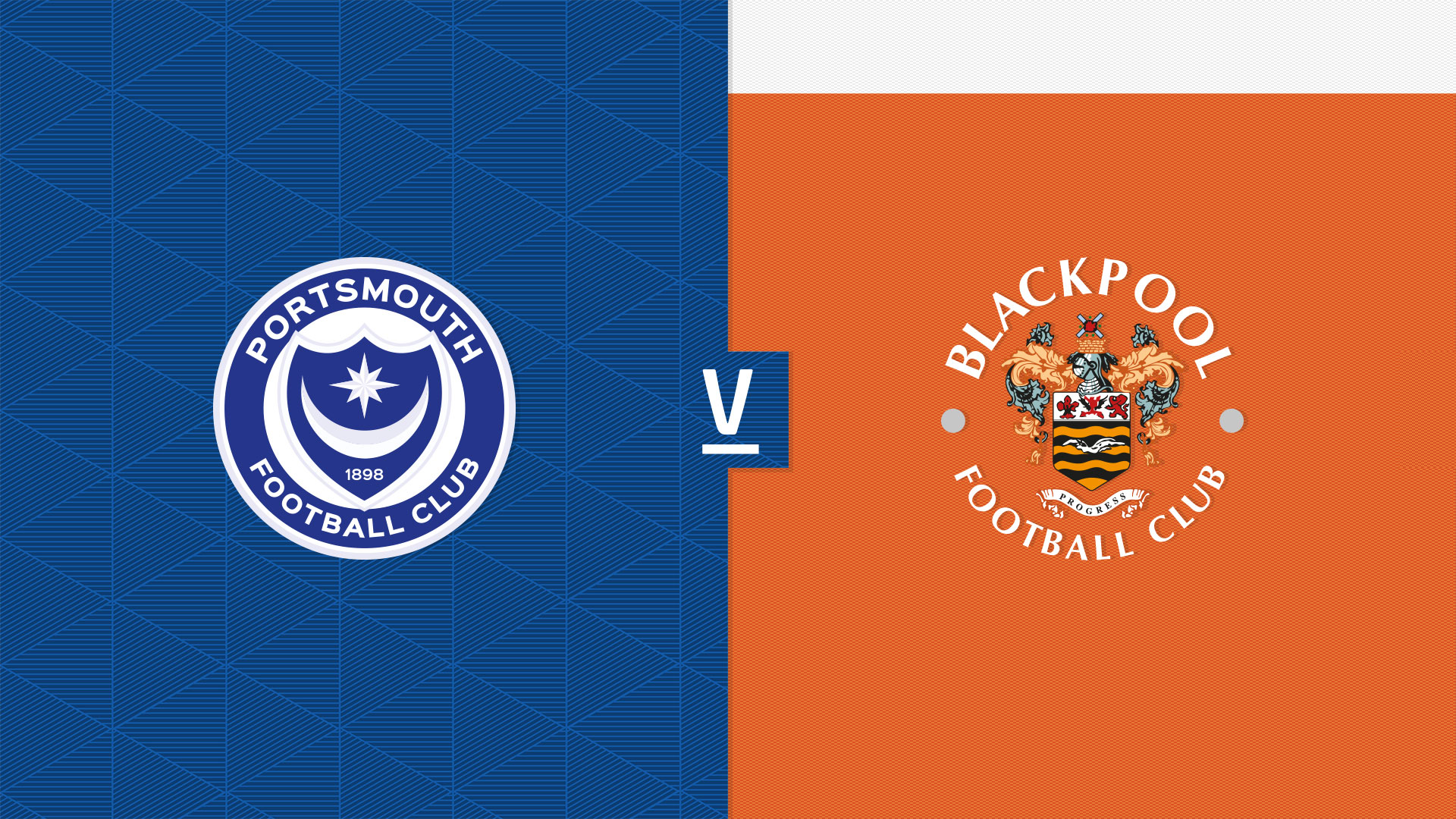 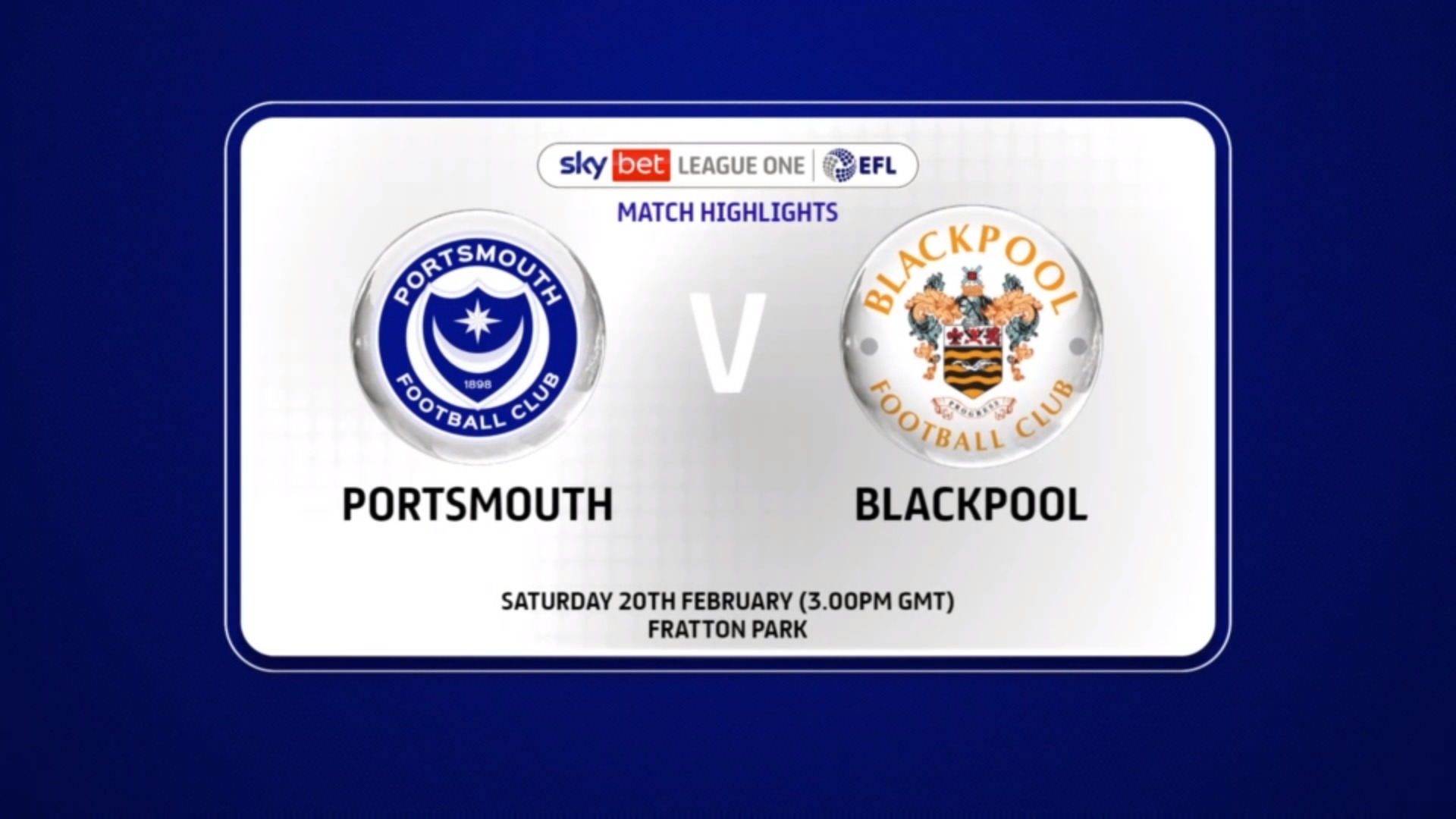 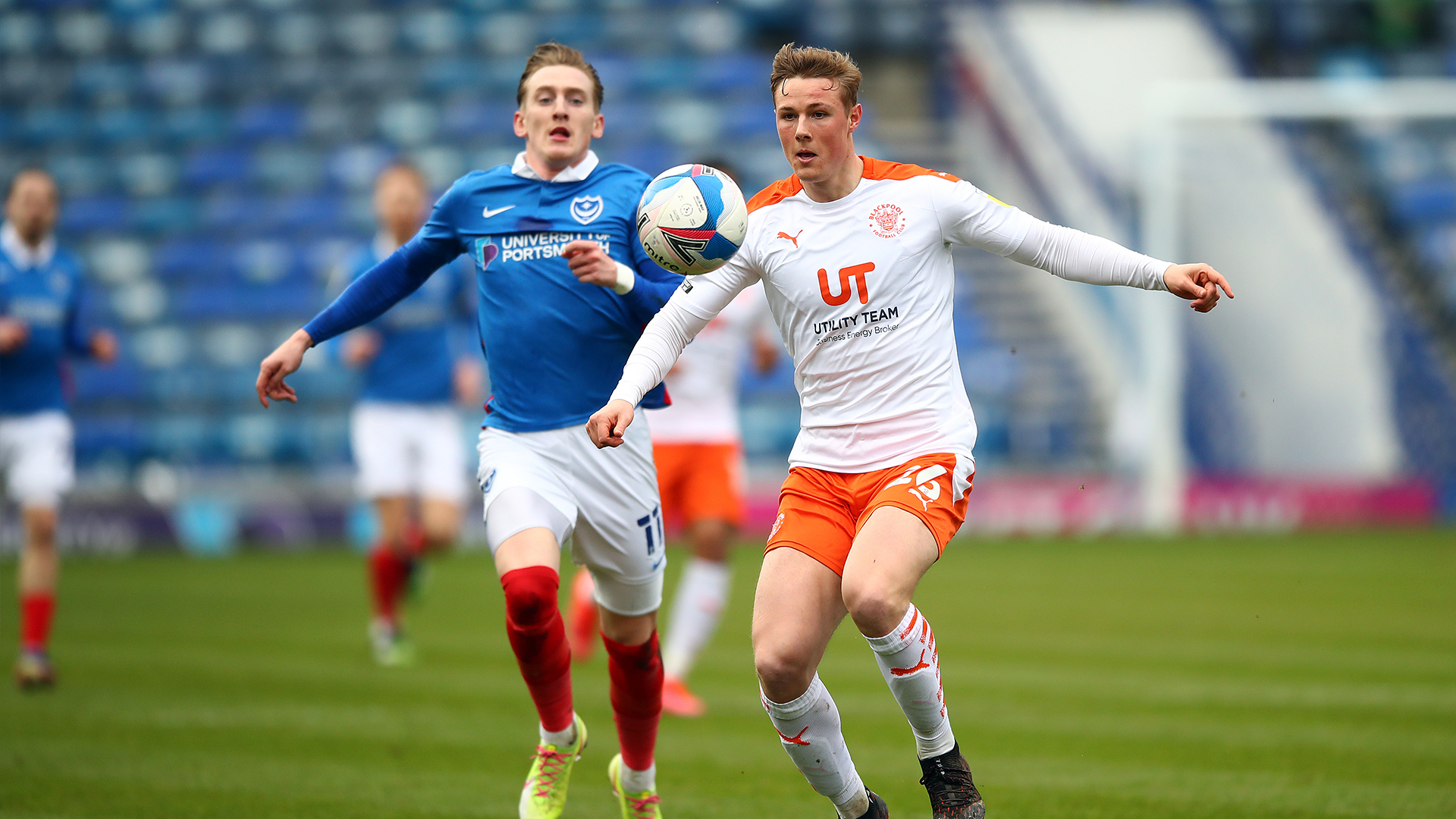