Pompey’s last match was Saturday’s victory at Fleetwood, while their most recent home fixture was against the same opponents all the way back on December 15.

So it is a welcome return to Fratton Park – albeit, sadly, without fans – for the first of three successive matches on the south coast.

Clashes with fellow promotion hopefuls Hull and Lincoln are to come, but it is AFC Wimbledon providing the opposition this evening.

While the Blues have a spot in the division’s top two on their mind, the visitors are more concerned with trying to escape the drop zone.

A single point has been collected from the Londoners’ past seven league fixtures to send them tumbling down to 21st position.

The only light in that gloomy run of results was last Tuesday’s victory at Bristol Rovers, which leaves Glyn Hodges’ troops just two wins away from a trip to Wembley in the Papa John’s Trophy.

Dons fans were left breathing a sigh of relief when the previous season was halted with their side sitting a single spot above the dreaded dotted line.

That campaign included a 2-1 defeat at Fratton Park, with Marcus Harness and John Marquis both on target for Pompey.

TEAM NEWS
Harvey White could make his Pompey debut after the midfielder completed a loan switch from Tottenham.

Ronan Curtis is also available again following a period of self-isolation, but Alex Bass (calf) and Paul Downing (hamstring) are both missing.

AFC Wimbledon will be without Ben Heneghan (hamstring) and Terell Thomas (illness) for their trip to the south coast.

VIEW FROM THE DRESSING ROOM
Read the thoughts of Kenny Jackett ahead of the game and see what new signing White had to say about his move to the south coast.

Flexi-season ticket holders and members have been sent a free voucher code by email. Click here for instructions on how to apply this.

Subscribers will, as usual, be able to listen to listen to live commentary from Andy Moon and Guy Whittingham by signing into their account and visiting the match centre from 7pm.

BETTING
Pompey are the 1/2 favourites with VBET to secure all three points, while the visitors can be backed at 6/1.

ALSO IN LEAGUE ONE
Games kick-of at 7pm unless stated 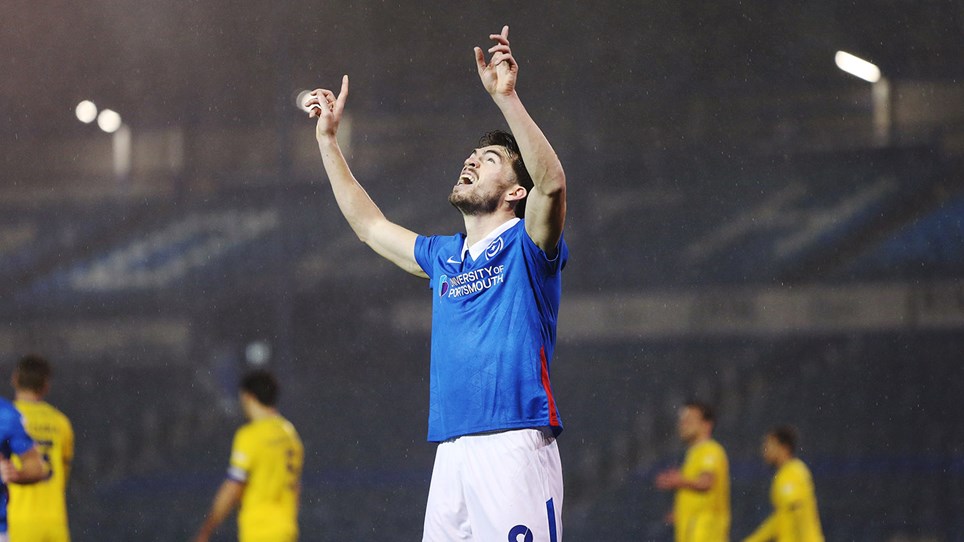 
Pompey thrashed AFC Wimbledon to enjoy their first return to Fratton Park for more than a month. 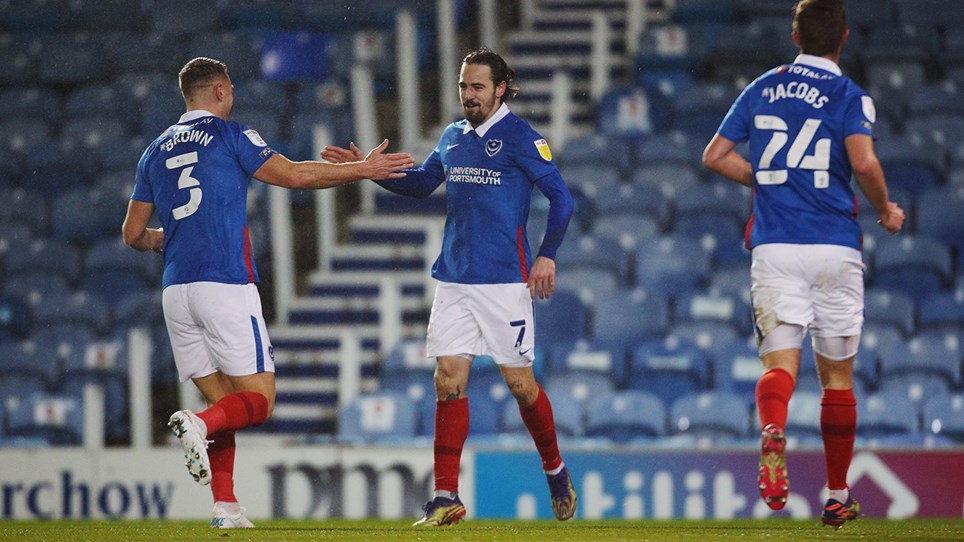 
Pompey continued their fine of League One form by brushing aside AFC Wimbledon at Fratton Park. 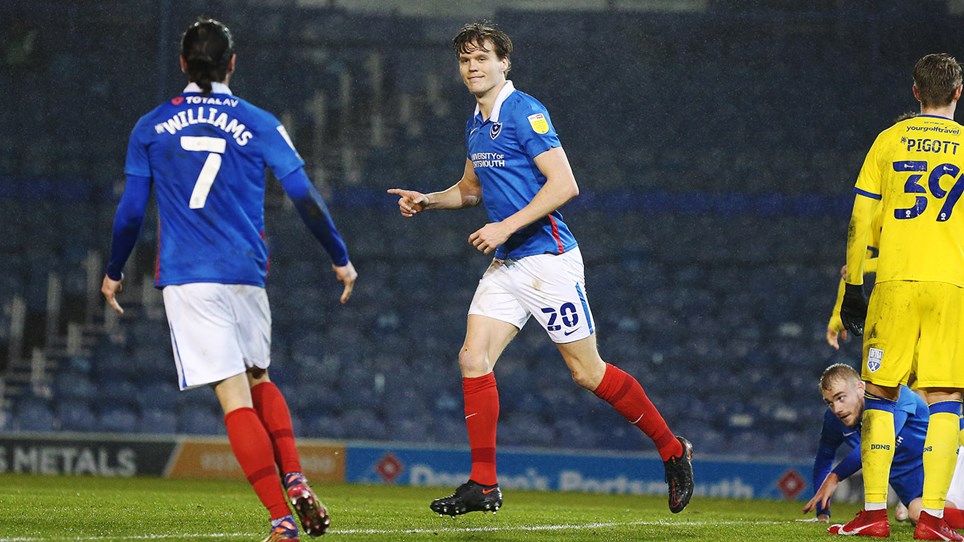 
Pompey’s excellent League One form in recent weeks has certainly been built on solid foundations. 
Pompey showcased a clinical edge to breeze past AFC Wimbledon and move to within a point of the League One summit.

Pompey moved to within a point of the League One summit following a comfortable victory over struggling AFC Wimbledon.

It was the first Fratton fixture in more than a month and the hosts brushed off the wet conditions to seal another valuable three points in the battle for promotion.

The damage was done in the opening 45 minutes, with leading marksman John Marquis breaking the deadlock with a close-range finish.

Ryan Williams then doubled the lead in impressive fashion, while Sean Raggett headed home a third goal before the interval.

And Ben Close came off the bench to complete an enjoyable evening for the Blues with a neat effort late on.

Kenny Jackett unsurprisingly stuck with the same side that had secured victory at Fleetwood a few days earlier.

It meant that new loan signing Harvey White had to be content with a place on the bench, where he was joined by Ronan Curtis, who had completed his self-isolation period.

There was a minute’s applause before kick-off in memory of former Pompey midfielder Bobby Kellard, who passed away earlier in the month at the age of 77.

The game took a while to get going, with neither side helped by the heavy rain that was swirling around the ground.

It was the hosts who had the first decent chance on 15 minutes, with Sam Walker getting down to parry clear a bending Andy Cannon effort.

Craig MacGillivray was not being troubled at the other end, although a corner caused a few concerns before it was prodded wide in a packed area.

Pompey were showcasing some neat build-up play – despite the tough conditions – without finding an end product.

But that arrived on 28 minutes when Michael Jacobs slipped a pass across to Callum Johnson, who sent the ball in from the right.

It was met by a glancing Williams header that was heading for the far corner, with MARQUIS nipping in at the back post to force the ball home.

Jack Whatmough might have doubled the lead with a bullet header from a Marcus Harness cross, but the ball was directed straight at Walker.

The Blues did have a second goal soon after, though, as Marquis laid the ball off for WILLIAMS, who took a couple of touches before curling a fine left-footed strike into the net from the edge of the area.

And there was time for a third just before the interval, when Jacobs sent a dangerous free-kick into the mixer.

It was attacked by both Whatmough and RAGGETT, but the latter got there first to firmly head the ball home.

The visitors started the second half brightly and Ryan Longman’s shot was blocked by Raggett, while a dangerous corner also had to be negotiated.

And they almost reduced their deficit when Jack Rudoni rose to meet a fine Luke O’Neill cross, only to guide his header past the post.

It was soon Pompey’s turn to threaten following some good play from Marquis, who slipped a pass across to Harness, although Williams was not able to flick home the winger’s delivery.

A teasing Lee Brown corner was then not properly deal with and Marquis tried to scoop the ball into the net, but could not find the target.

Jackett made a switch just past the hour mark, with the lively Jacobs withdrawn and replaced on the left by Curtis.

Pompey were cruising, but a deflected cross from Nesta Guinness-Walker – the great-grandson of Obi-Wan Kenobi actor Alec Guinness – had to be scrambled around the post by MacGillivray.

A further double change followed, with White coming on for his debut alongside Ellis Harrison, as Cannon and Marquis made way.

The newcomer soon made a good sliding challenge that would have drawn warm applause from the Fratton faithful, had any of them been inside the ground.

Pompey then saw off a spell of Dons pressure and Harrison had two chances to extend the advantage in quick succession.

A drilled effort was parried away by Walker, while he then headed a Curtis cross down and the ball bounced over.

But it was left for substitute CLOSE to wrap things up, racing onto Curtis’ pass and neatly slotting the ball into the bottom corner.


Pompey thrashed AFC Wimbledon to enjoy their first return to Fratton Park for more than a month.


Pompey continued their fine of League One form by brushing aside AFC Wimbledon at Fratton Park.


Pompey’s excellent League One form in recent weeks has certainly been built on solid foundations.


Pompey showcased a clinical edge to breeze past AFC Wimbledon and move to within a point of the League One summit. 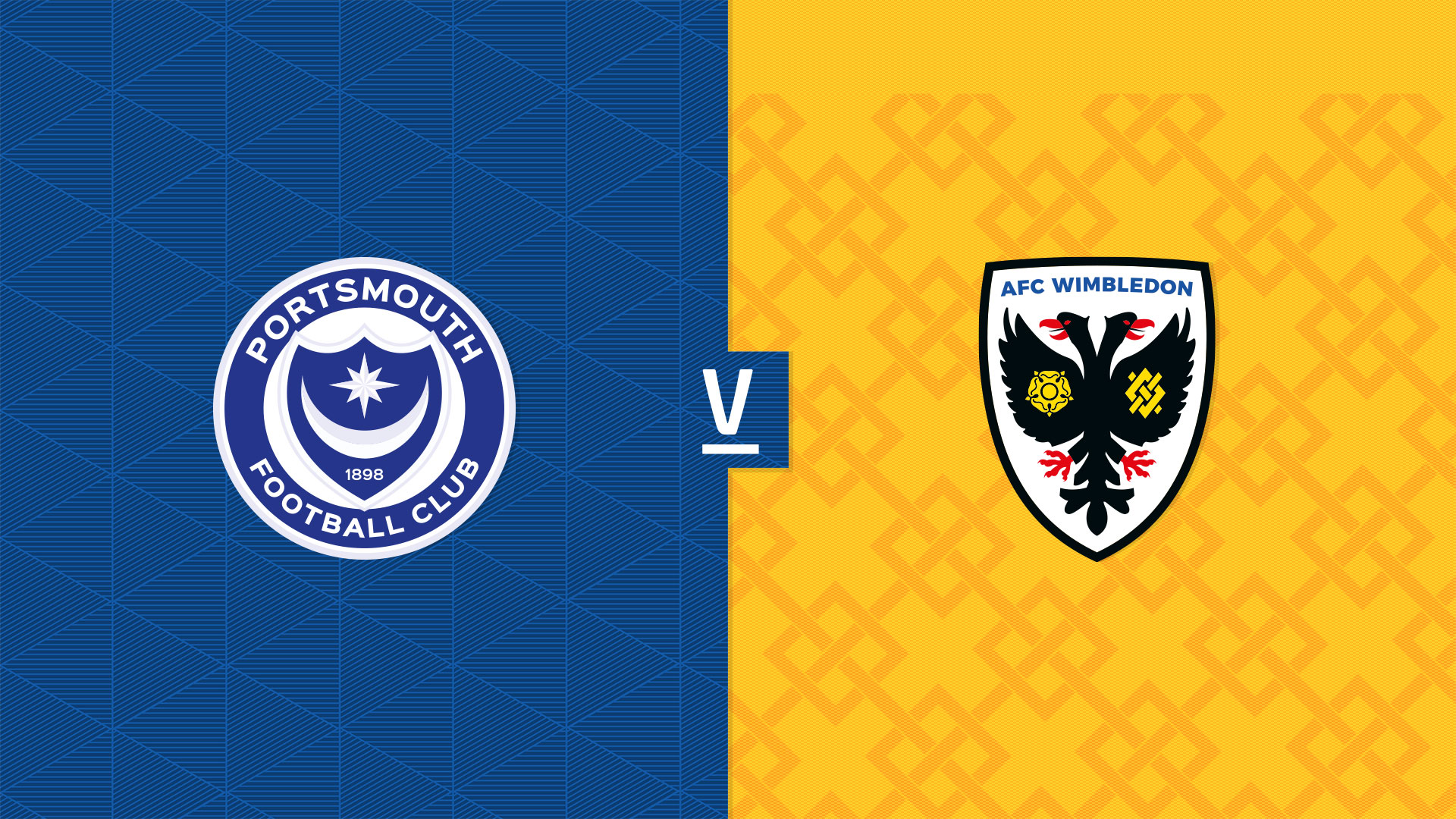 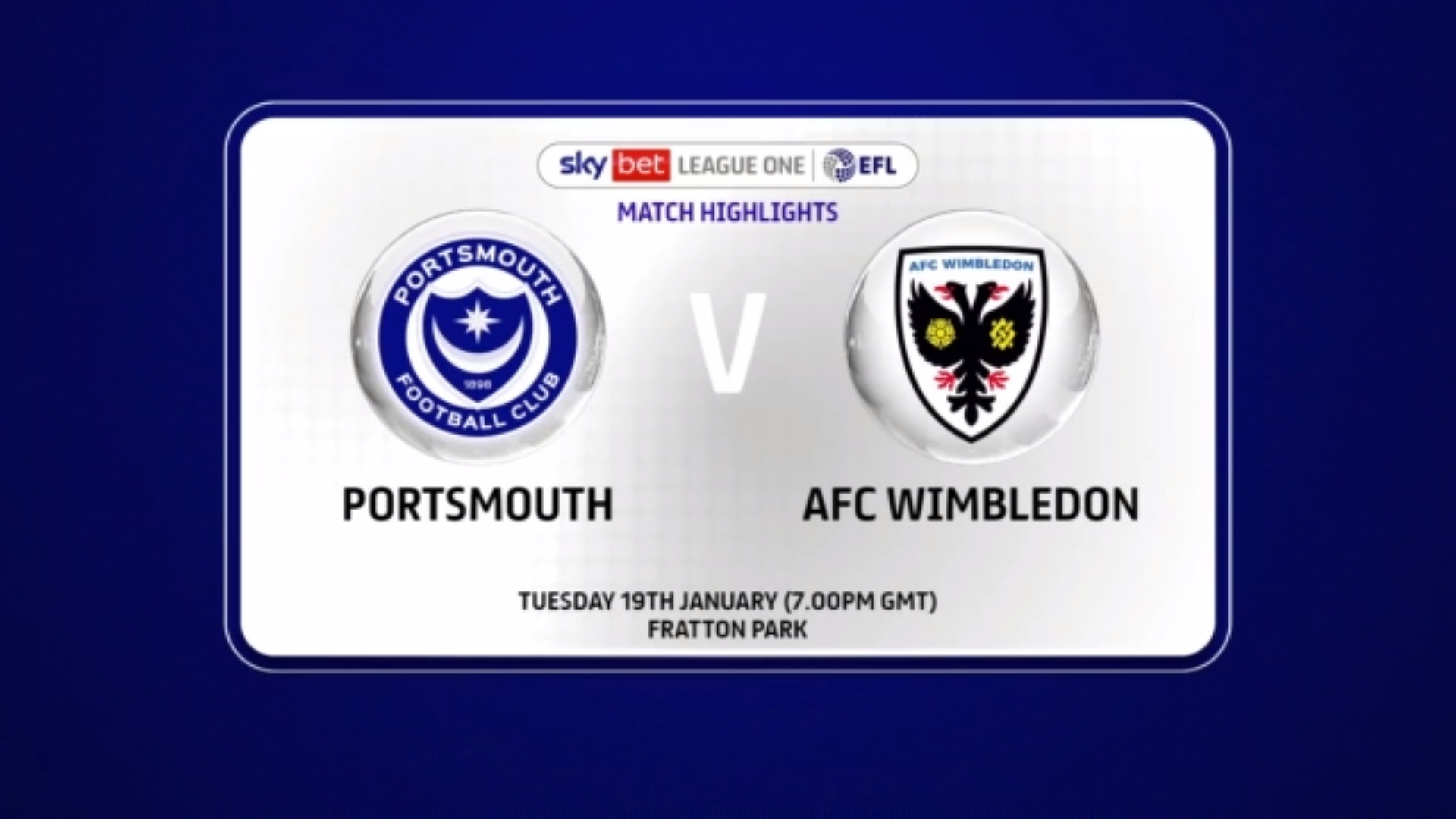 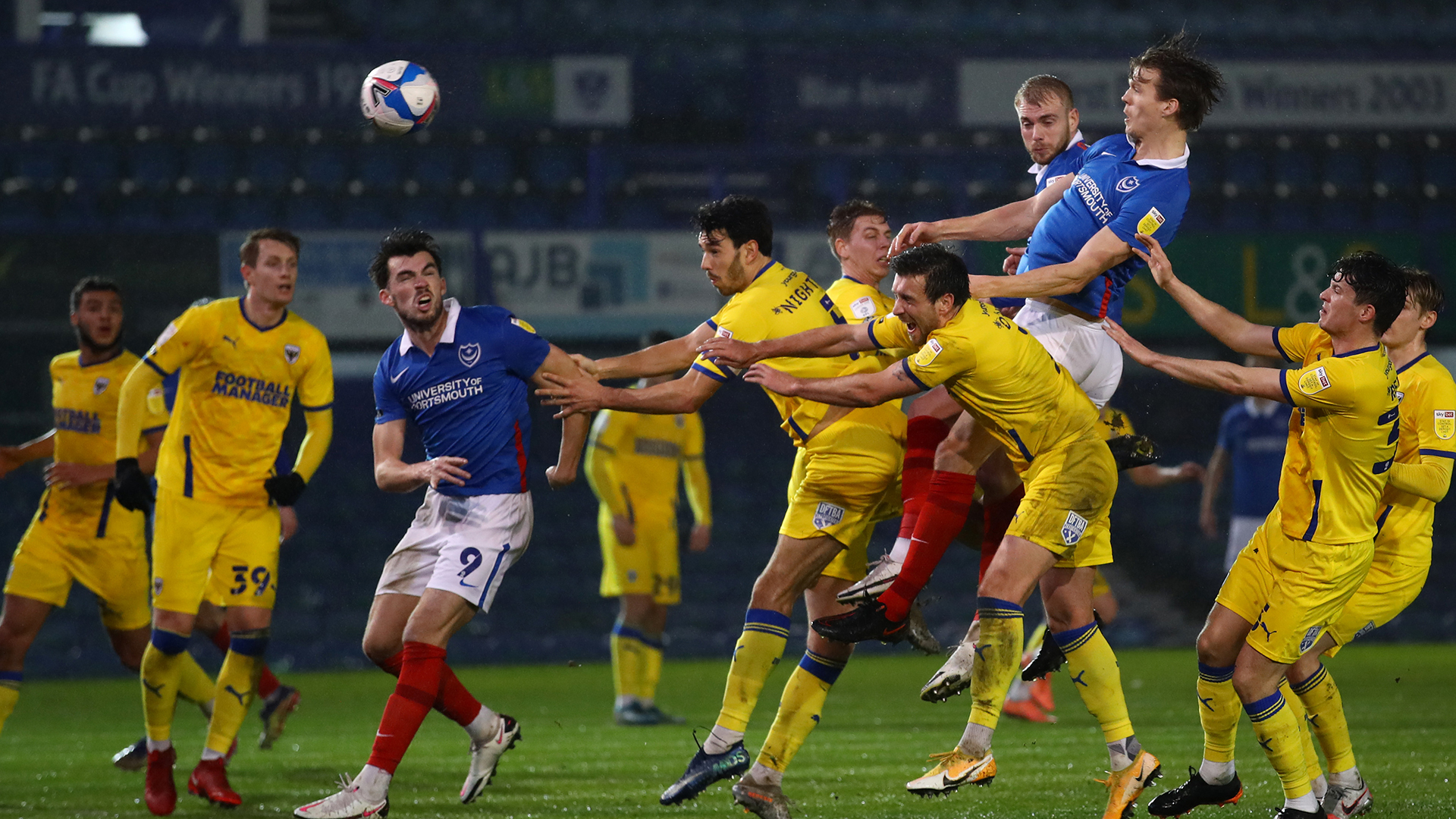