The manager left the club over the weekend after almost four years at the helm and with a couple of promotion near-misses – as well as an EFL Trophy triumph – under his belt.

His assistant Joe Gallen is taking temporary charge of the team tonight, while the hunt for a new boss continues.

And with the Blues trying to arrest their alarming run of form, they could not have asked for a much tougher test than a trip to London Road.

The hosts are currently sitting second in the standings and have collected 10 more points than Pompey, who dropped to seventh over the weekend.

But Posh are currently on a three-match winless run and have suffered successive defeats to Burton and leaders Hull.

The latter loss came despite Reece Brown’s early opener on home soil at the weekend, with the Tigers ultimately triumphing 3-1.

A youthful Blues side were thrashed 5-1 when the sides met in the Papa John’s Trophy back in January.

But they emerged victorious in front of 2,000 fans at Fratton Park in the league the previous month, courtesy of goals from Jack Whatmough and Tom Naylor.

Alex Bass (foot) is still out, while Callum Johnson is not ready to feature after returning to training following a calf problem, but Andy Cannon is available again.

VIEW FROM THE DRESSING ROOM
Read the thoughts of caretaker manager Joe Gallen ahead of the game.

Supporters can use the settings cog to switch to local Peterborough commentary if they prefer.

BETTING
Peterborough are the 11/10 favourites with VBET to secure all three points, while Pompey can be backed at 13/5. 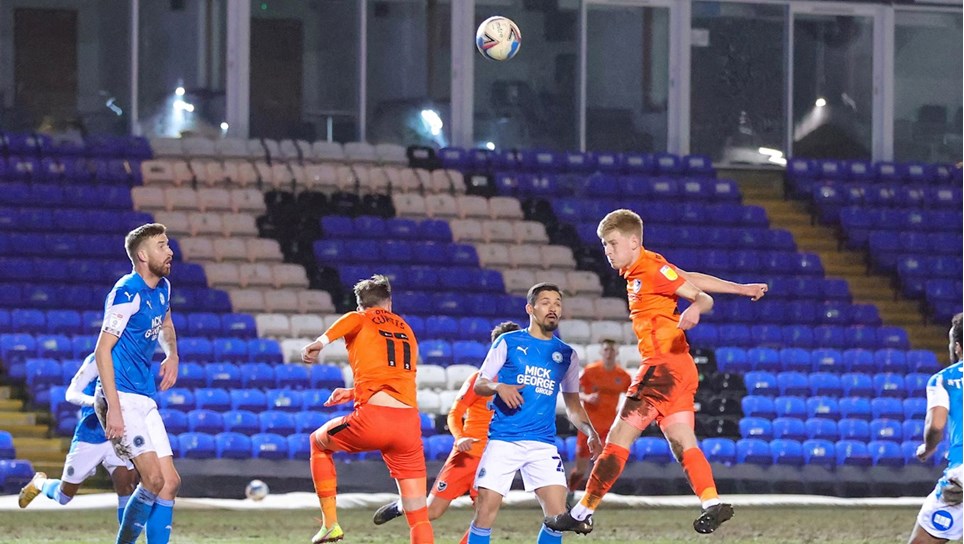 
Pompey were unable to halt their losing run, despite a much improved performance at Peterborough. 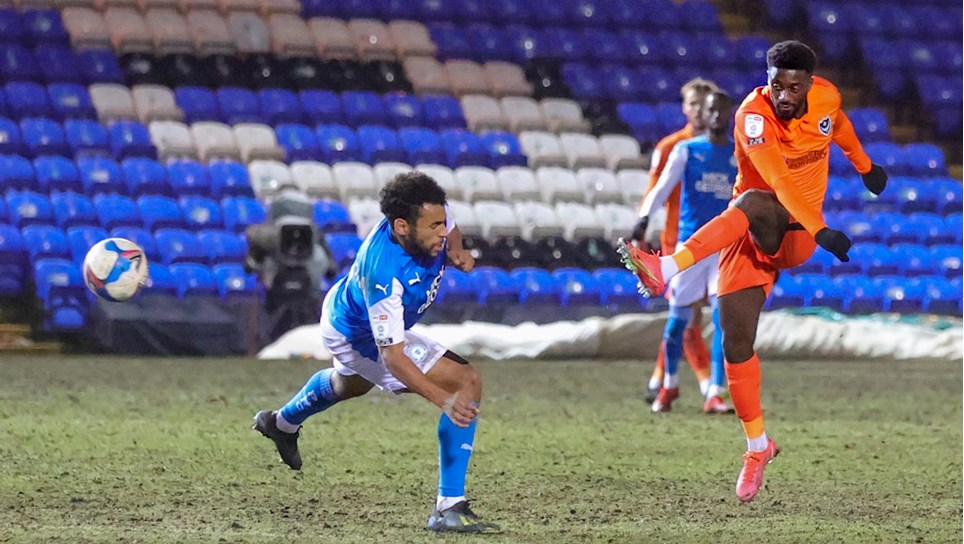 
Pompey slipped to 10th in the table after suffering a fourth successive League One defeat. 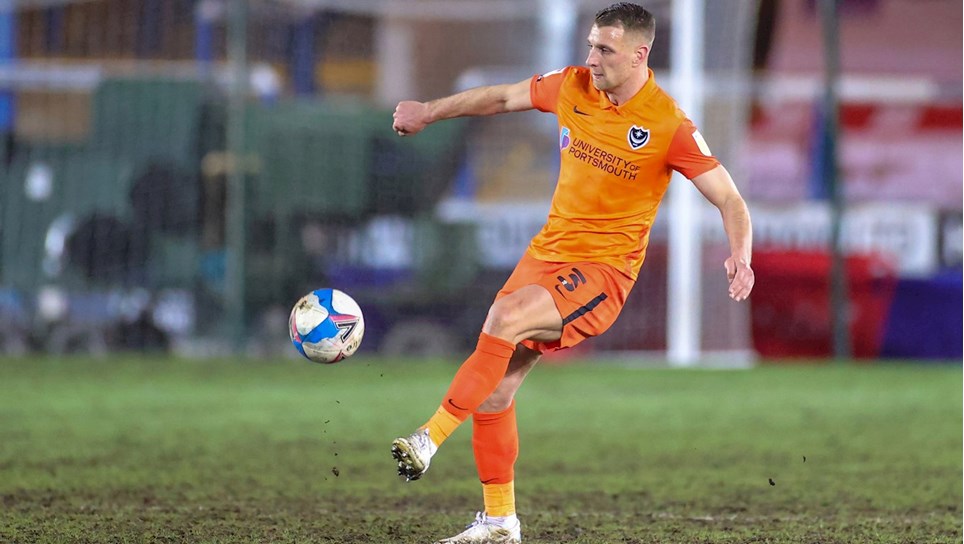 Brown: Our Luck Will Change


There were several set-pieces that led to a spot of pinball in the Peterborough box at London Road. Gallen: We Deserved Something


It was a daunting task for Joe Gallen to negotiate in his first game as Pompey’s caretaker manager.

Pompey produced a performance full of heart, desire and effort in their League One contest at high-flying Peterborough.

But – in the first game since Kenny Jackett’s departure – it ultimately proved not enough to put a halt to their run of losing form.

An unfortunate Rasmus Nicolaisen own-goal in the first half was enough to secure all three points for Posh.

And although the Blues caused plenty of problems after the break, they were not quite able to force an equaliser.

Caretaker boss Joe Gallen made five changes from the side that were beaten on penalties by Salford in Saturday’s Papa John’s Trophy final.

Nicolaisen, Lee Brown and Ronan Curtis also came into the line-up, as the visitors switched to a 3-1-4-2 system.

Jordy Hiwula, Harvey White, George Byers and Charlie Daniels all dropped to the bench, but an ankle injury forced John Marquis to miss out completely.

There were a couple of familiar faces in the Peterborough team, with former Fratton full-backs Nathan Thompson and Dan Butler both named in their defence.

Pompey looked organised and kept their discipline right from the off, preventing the hosts from being able to test Craig MacGillivray.

Passing football was proving difficult for both sides on a poor pitch that immediately began to cut up even more.

Ryan Williams was looking the most dangerous player for the visitors and had a couple of dangerous runs that ultimately came to nothing.

The Australian forward then sent a dangerous delivery into the box that Curtis could not quite bring under control.

And Thompson then made a key challenge to stop Williams getting a shot away after a long Jack Whatmough throw had been flicked on.

But Posh took the lead in fortunate fashion on 32 minutes, when Harrison Burrows swung in a dangerous corner.

MacGillivray tried to palm the ball away to stop it crossing the line, only for it to hit team-mate Nicolaisen and ricochet into the net.

Pompey’s best chance of the half soon followed, as a fiercely-struck Curtis free-kick was well held by Christy Pym.

There were a couple more half-chances for the visitors as they finished the half with a flourish, but they could not find a leveller.

The Blues caused some problems when the action restarted and a deep Brown free-kick had to be nodded behind.

Curtis sent the resulting corner in the box, but James Bolton was unable to keep his header down at the back stick.

And a second set-piece soon followed from the Republic of Ireland international, with Posh failing to clear and Nicolaisen seeing his eventual effort deflected wide.

Whatmough then had a decent chance to level when he rose highest to meet Brown’s free-kick, only to divert the ball well wide.

Gallen made his first switch just past the hour mark, with Marcus Harness providing a fresh attacking option in place of Cannon.

Pompey were looking the more threatening side, but MacGillivray was still called into action keep out an attempt from substitute Mo Eisa.

And the keeper then had to dive to his right to push away an instinctive long-range strike from Louis Reed.

A double switch followed for the visitors, with Sean Raggett and Williams making way for White and Hiwula.

Set-pieces were looking the Blues’ most likely source of an equaliser and another Brown free-kick caused a few problems before Bolton nodded over.

And Tom Naylor did the same when Curtis sent one in from the other side after Mark Beevers had been booked for fouling Harness.

Hiwula then hit a really crisp shot from open play, but the ball flew straight at a grateful Pym, who comfortably held.

And White was the next player who could not keep his header down, this time when Harness swung in a fine cross.

It had been a performance full of endeavour from the Blues, but their opponents did just enough to hold on for victory.


Pompey were unable to halt their losing run, despite a much improved performance at Peterborough.


Pompey slipped to 10th in the table after suffering a fourth successive League One defeat.

Brown: Our Luck Will Change


There were several set-pieces that led to a spot of pinball in the Peterborough box at London Road.

Gallen: We Deserved Something


It was a daunting task for Joe Gallen to negotiate in his first game as Pompey’s caretaker manager. 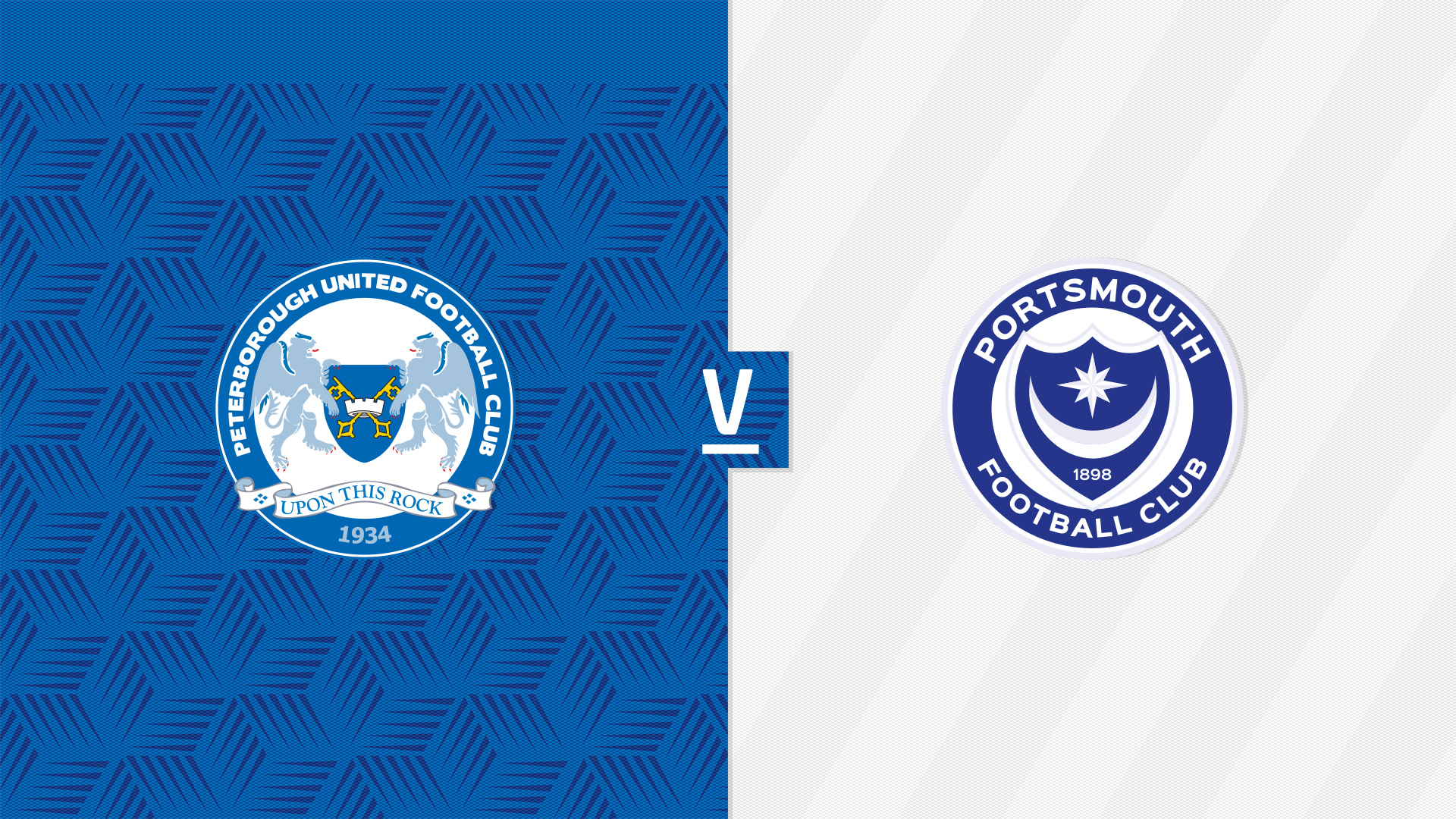 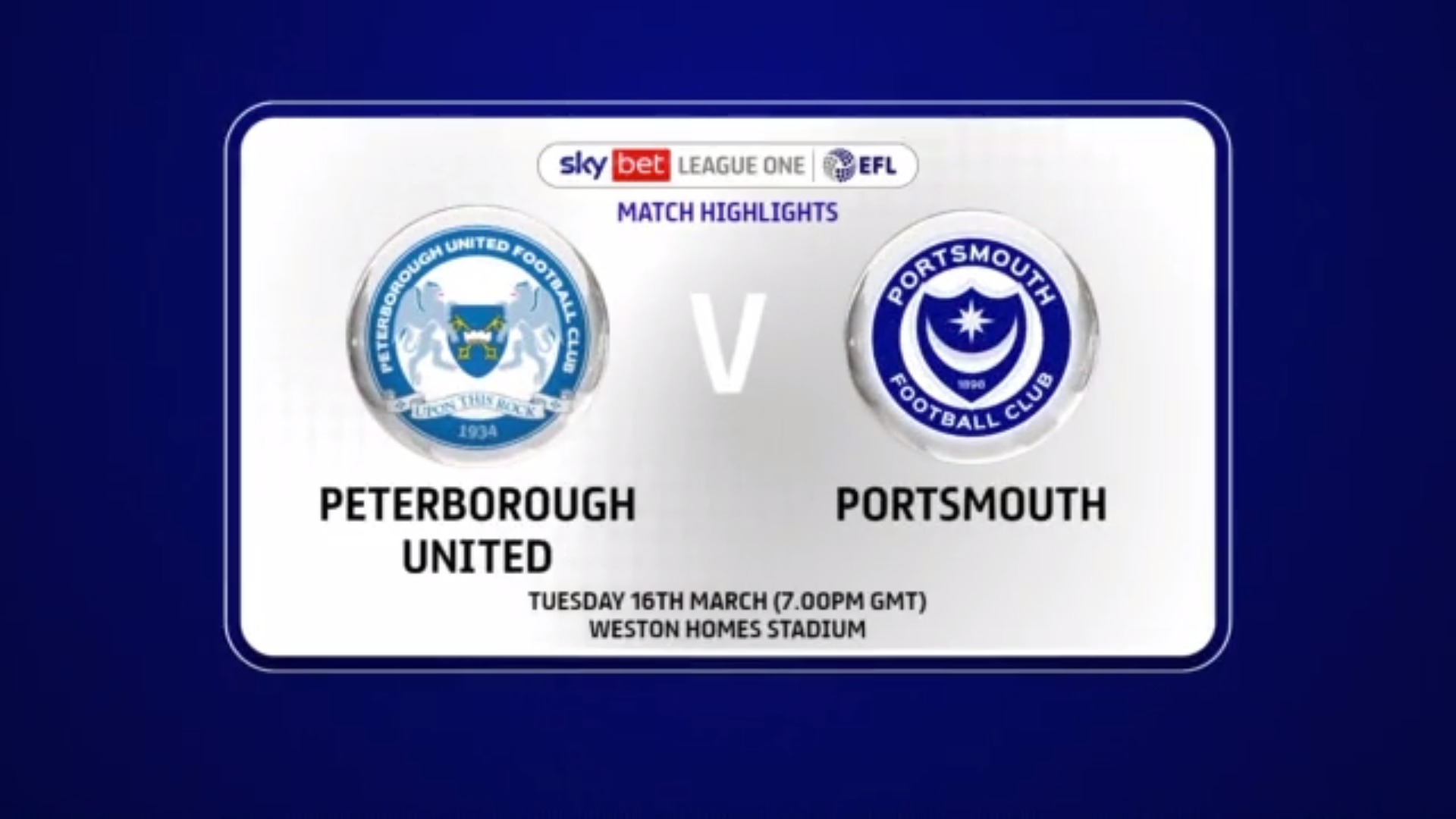 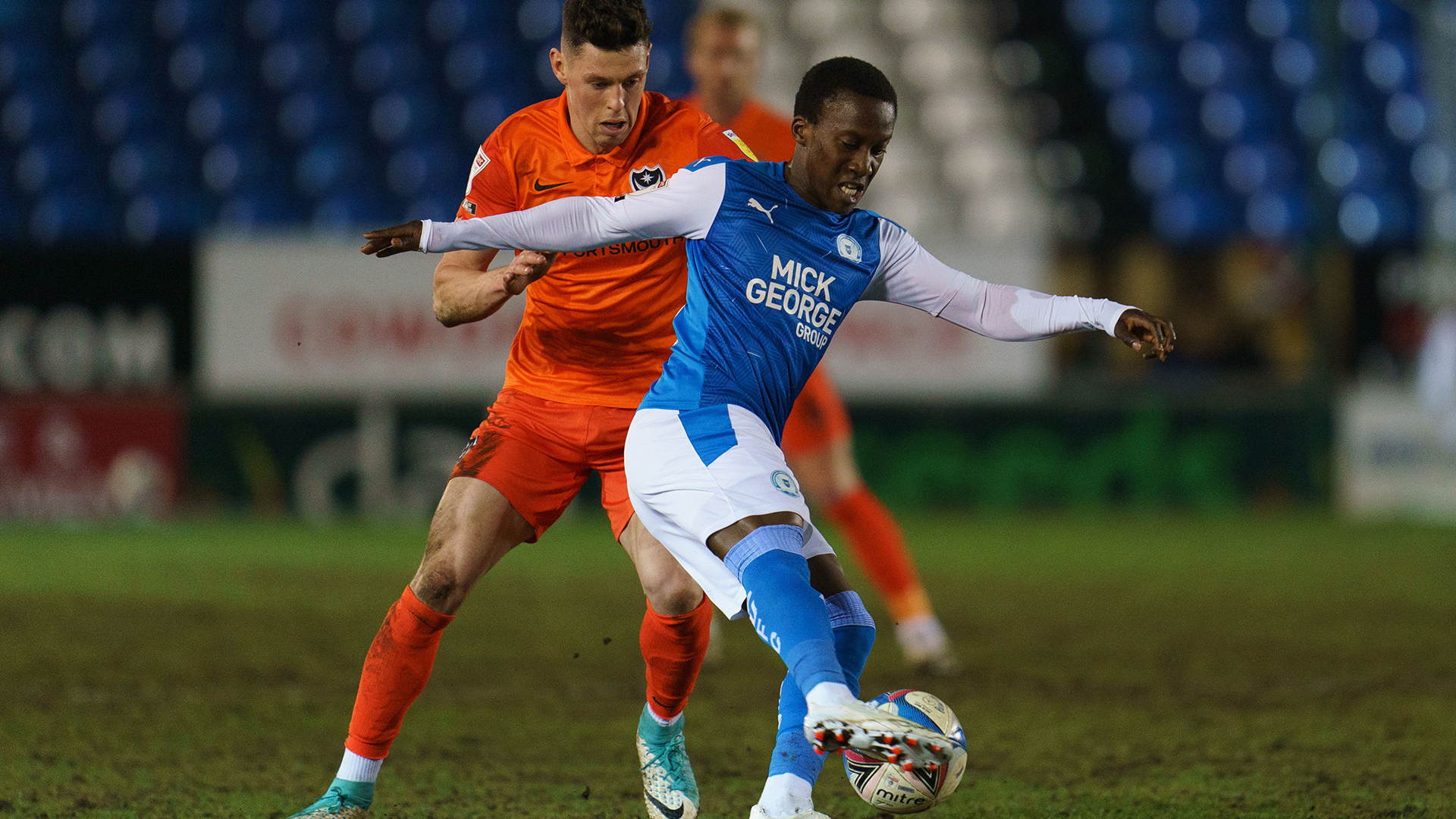