There are just two games remaining for Pompey to claim a play-off spot and ensure their season is extended beyond May 9.

And the first of them sees a maiden trip to the new Plough Lane to take on AFC Wimbledon on Saturday (3pm kick-off).

While the visitors are trying to reach the Championship, their opponents want to secure their third tier status for another campaign.

It looks as though they have already done enough, though, with a six-point gap to Rochdale and Northampton in the drop zone and a superior goal difference over both sides.

They were in the bottom four following a home defeat to Fleetwood on Easter Monday – but that is the last time the Dons have tasted defeat.

Head coach Mark Robinson – who replaced Glyn Hodges in January – has guided the side to a six-match unbeaten run that includes four victories.

Like Pompey, they were involved in a six-goal thriller earlier in the week, with Joe Pigott’s stoppage-time strike earning a point against struggling Rochdale.

Goals from John Marquis, Ryan Williams, Sean Raggett and Ben Close secured a 4-0 Blues victory when the sides met on the south coast earlier in the season.

But a late Terell Thomas header ensured Wimbledon took all three points in the most recent away meeting – which took place at Kingsmeadow – last term.

But Lee Brown is available again following a hamstring problem, while Jordy Hiwula (ankle) has returned to training.

Callum Reilly (ankle) is sidelined for the hosts, while there are doubts over the fitness of Ethan Chislett (Achilles) and Darnell Johnson (ankle).

VIEW FROM THE DRESSING ROOM
Read the thoughts of Danny Cowley and Tom Naylor ahead of the game.

Pompey are taking part in a social media boycott this weekend, but there will be updates throughout the game via the match centre. 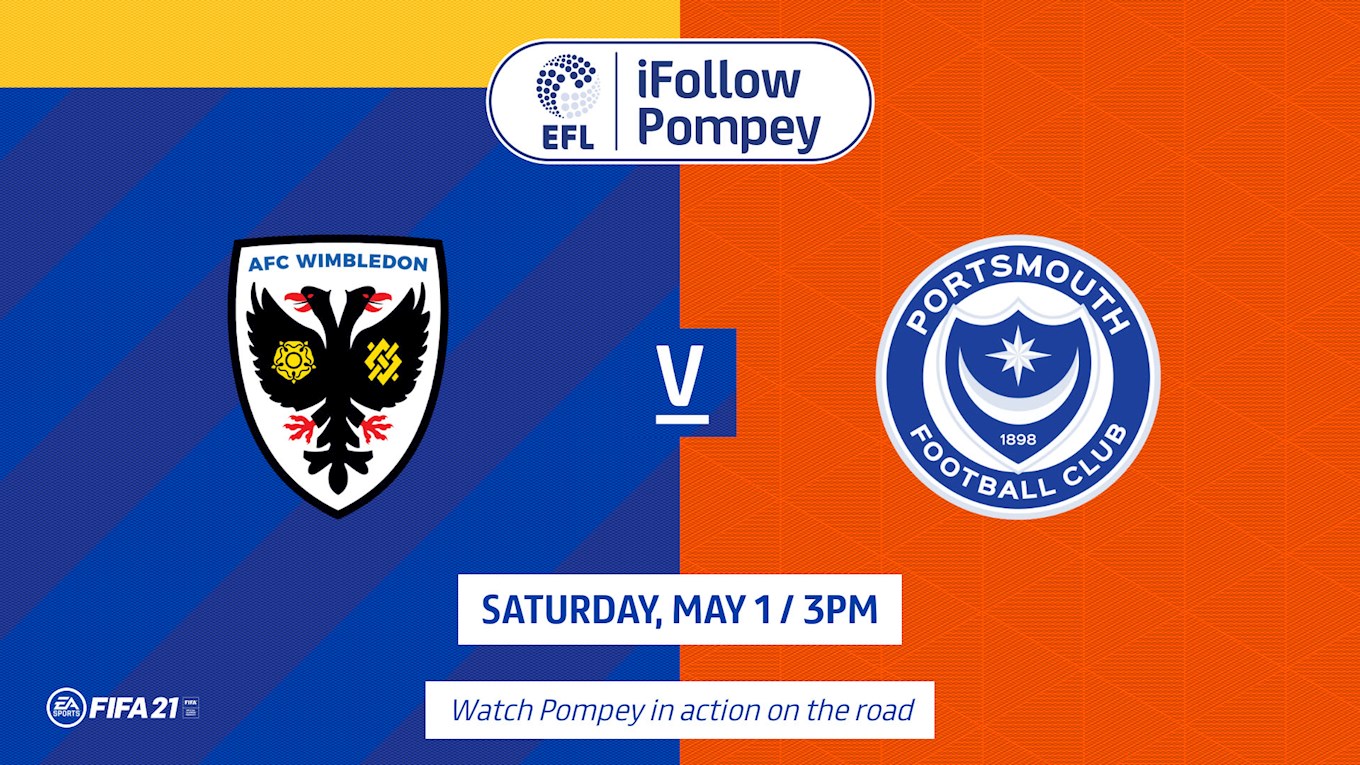 BETTING
Pompey are the 29/20 favourites with VBET to secure all three points, while the hosts can be backed at 19/10. 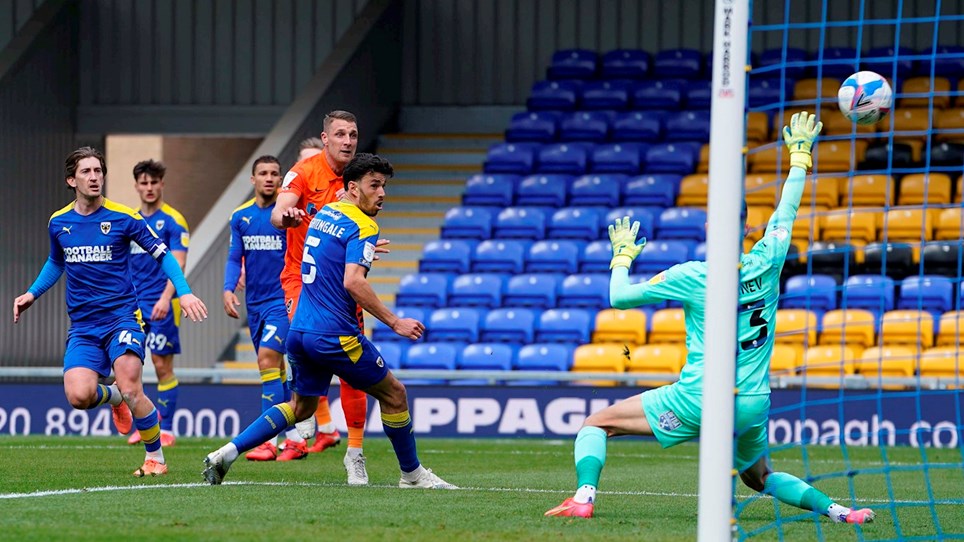 
Pompey gave their chances of securing a play-off spot a huge boost by battling from behind to win at AFC Wimbledon. 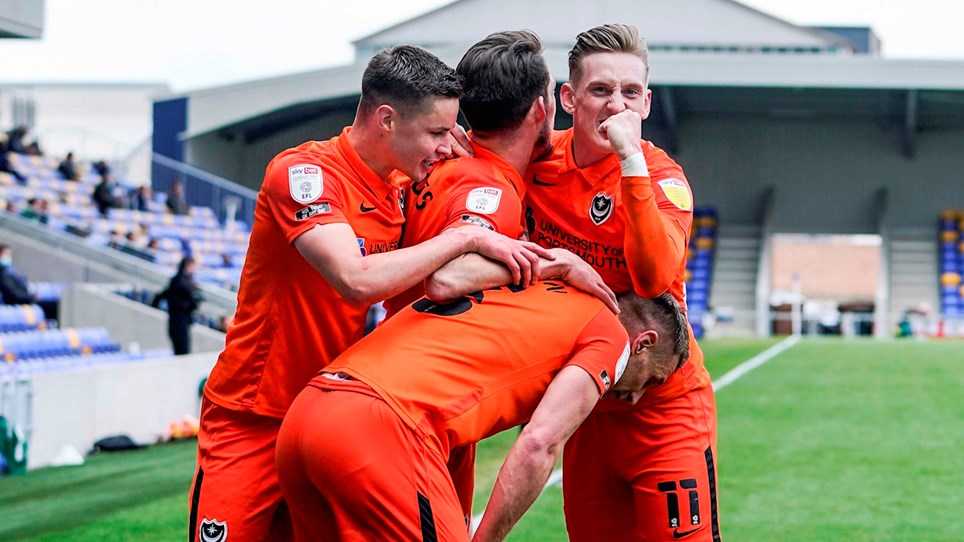 
Prior to this weekend, Lee Brown had only scored once in 105 appearances in a Pompey shirt. 
The equation is simple. Beat Accrington next Sunday and Pompey will be in the League One play-offs.

Lee Brown was the unlikely goalscoring hero, as Pompey won at AFC Wimbledon to ensure that securing a play-off place is in their hands.

The defender – making his first appearance for three weeks after recovering from a hamstring problem – struck twice at the end of the first half.

He had only previously netted just once for the Blues, but his second goal in particular was a thing of beauty that would have been treasured by the most prolific of strikers.

The visitors had earlier fallen behind to Joe Pigott’s questionable goal, only for Ronan Curtis to immediately level.

And the Plough Lane result, coupled with Charlton dropping points at Accrington, means that Pompey head into their final fixture knowing that a win would be enough to extend their season.

Danny Cowley made three changes from the side that dramatically drew at Accrington earlier in the week.

Paul Downing was handed a first league start in more than 19 months, while there were also returns for Ryan Williams and a fit-again Brown.

Rasmus Nicolaisen, James Bolton and George Byers were the players to make way, with the trio all named among the substitutes.

Pompey almost took the lead in the opening minute following a neat move that was started by Curtis.

He found Tom Naylor, who in turn spread the ball out for Marcus Harness, but his delivery was a bit too powerful for Curtis and he fired over.

It was the home side who then started to look dangerous and Jack Rudoni scuffed wastefully wide after Sean Raggett could only clear a cross into his path.

The same player then drilled in a low shot and Craig MacGillivray got down well to his right to palm the ball behind.

But it was a moment of controversy that saw the Dons break the deadlock midway through the first half.

Pigott raced onto a powerful header forward from Ben Heneghan, but was in an offside position and the assistant raised his flag.

Referee Charles Breakspear decided the ball had flicked off Ben Close, however, and allowed the goal to stand, much to the visitors’ fury.

But they did not let their heads drop and levelled straight from the restart, with the in-form CURTIS on target.

Harness cut inside from the right and tried to find John Marquis in the centre, only for the ball to run across for the Republic of Ireland international to lash home.

AFC Wimbledon tried to restore their advantage and MacGillivray managed to divert Pigott’s angled effort behind.

It was Pompey who finished the half on top, though, and there were half-chances for Naylor and Marquis.

But it was an unlikely figure that scored twice right at the end of the first half to give them a commanding lead.

BROWN had only one Blues goal to his name, but collected the ball from Curtis on the overlap and fired into the bottom corner.

And it was an even more majestic finish from the left-back to give them a two-goal advantage at the interval.

BROWN stole possession from Ryan Longman on the left, collected the ball back from Curtis and hit a fine shot with the outside of his foot that crashed against the underside of the bar and into the net.

Pigott had a chance to reduce his team’s deficit following the restart, but nodded Cheye Alexnader’s cross wide at the back post.

Pompey were still passing the ball around nicely, though, as they continued to search for a route through the opposition defence.

And a great piece of perseverance created an opening for Harness on 57 minutes, with the winger flashing a shot inches past the post.

The visitors were enjoying plenty of possession in the Dons half and only a timely block denied Brown an unlikely treble.

It was not all one-way traffic, though, and MacGillivray got down to his left when Pigott curled a free-kick towards the target.

The Blues were next to threaten, but Williams scuffed his attempt wide following great work from Harness on the right.

Both sides were guilty of some wasteful finishing, with Pigott and Alexander failing to get enough power on their efforts to trouble MacGillivray.

But the Dons were dealt a blow when Heneghan went down injured on 76 minutes and was unable to continue.

They had already used all three of their substitution slots and so had to play out the closing stages with just 10 men.

Harvey White came on for Curtis for the closing stages and soon had a chance to wrap up the three points.

Marquis raced clear on goal, but Nik Tzanev stuck out a hand to deny him and the striker instead picked out White, whose shot was deflected just wide.

But Pompey saw out the closing stages to claim a valuable win and results elsewhere ensured that Wimbledon could celebrate survival.


Pompey gave their chances of securing a play-off spot a huge boost by battling from behind to win at AFC Wimbledon.


Prior to this weekend, Lee Brown had only scored once in 105 appearances in a Pompey shirt.


The equation is simple. Beat Accrington next Sunday and Pompey will be in the League One play-offs. 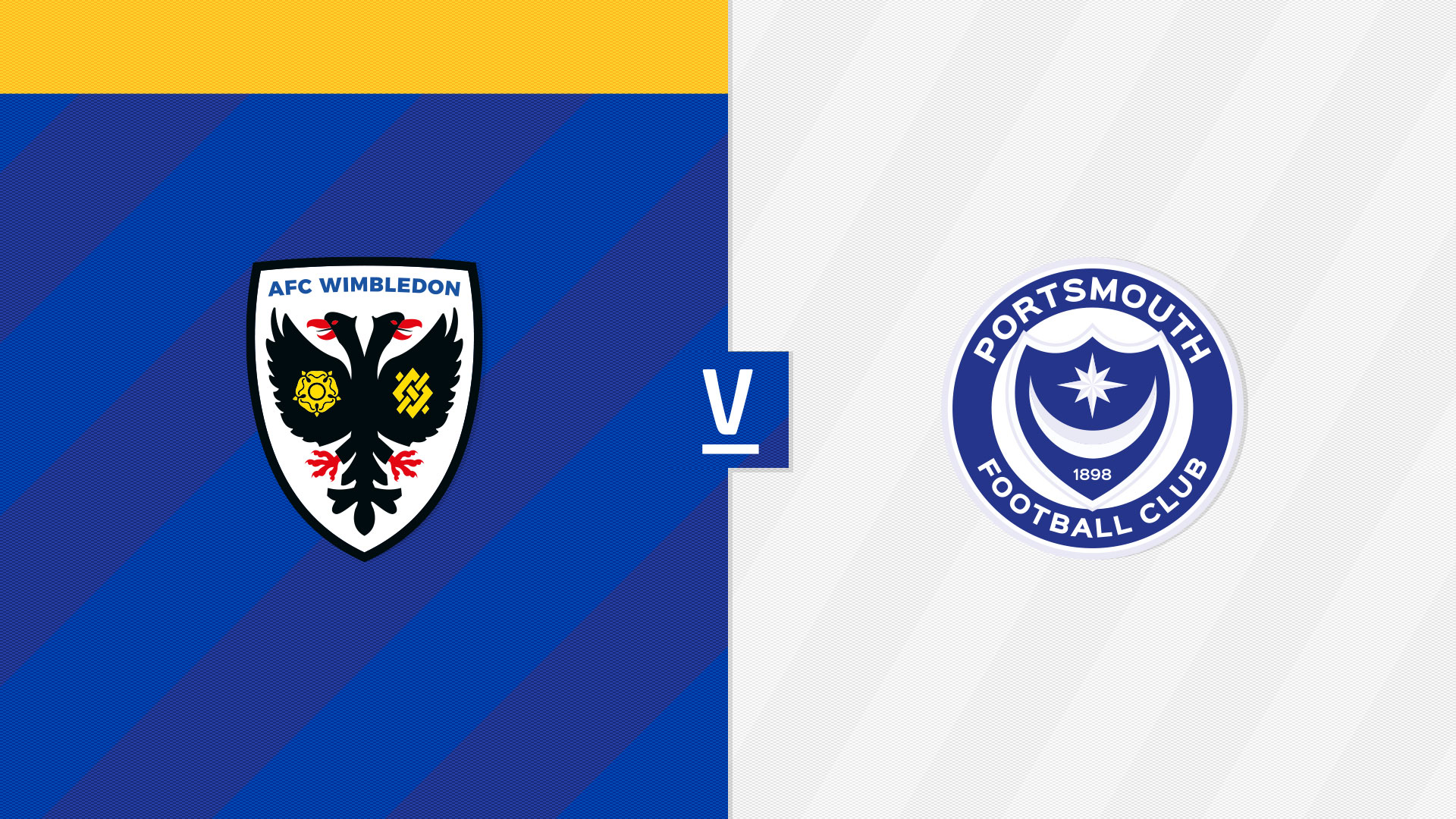 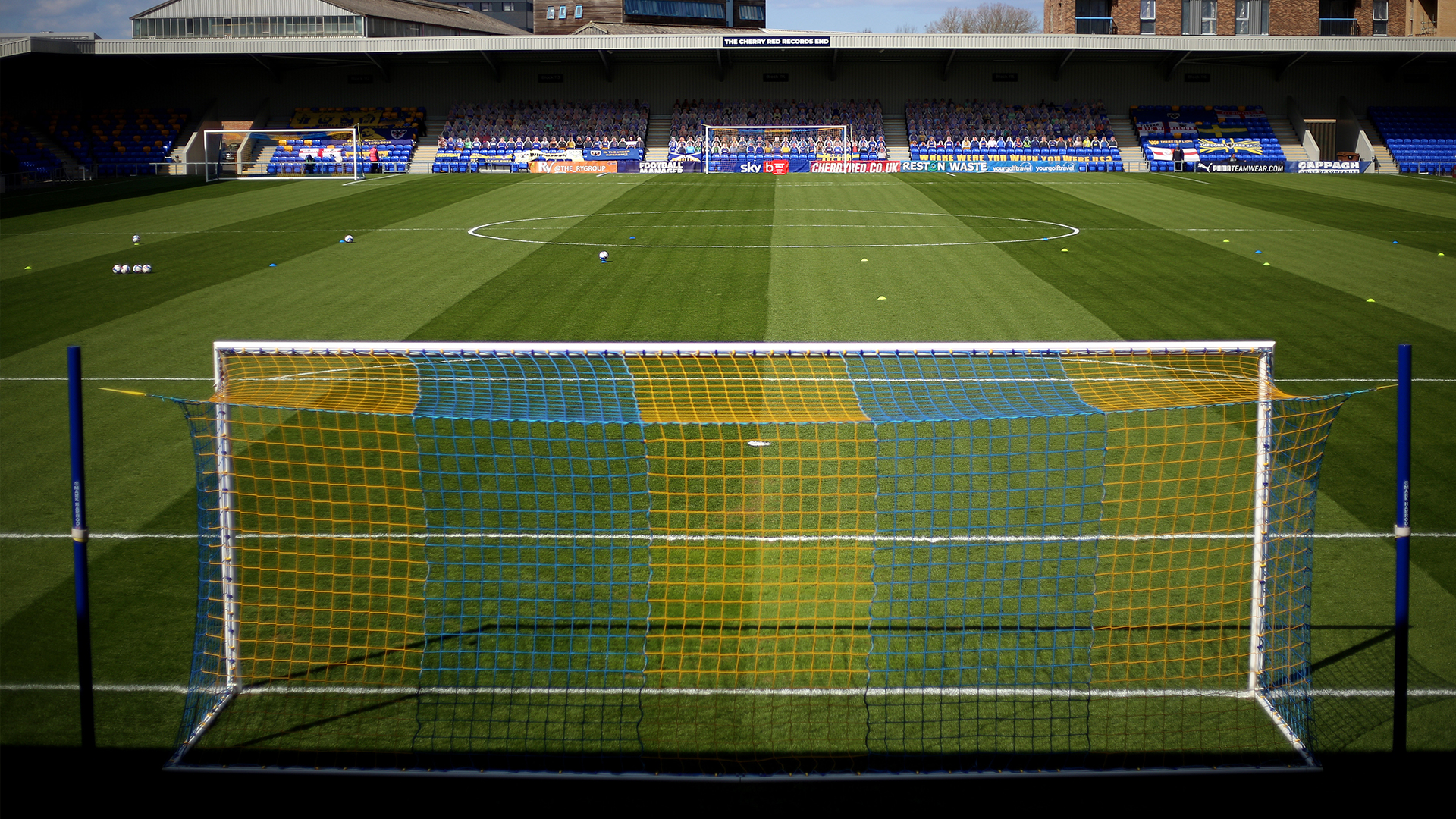 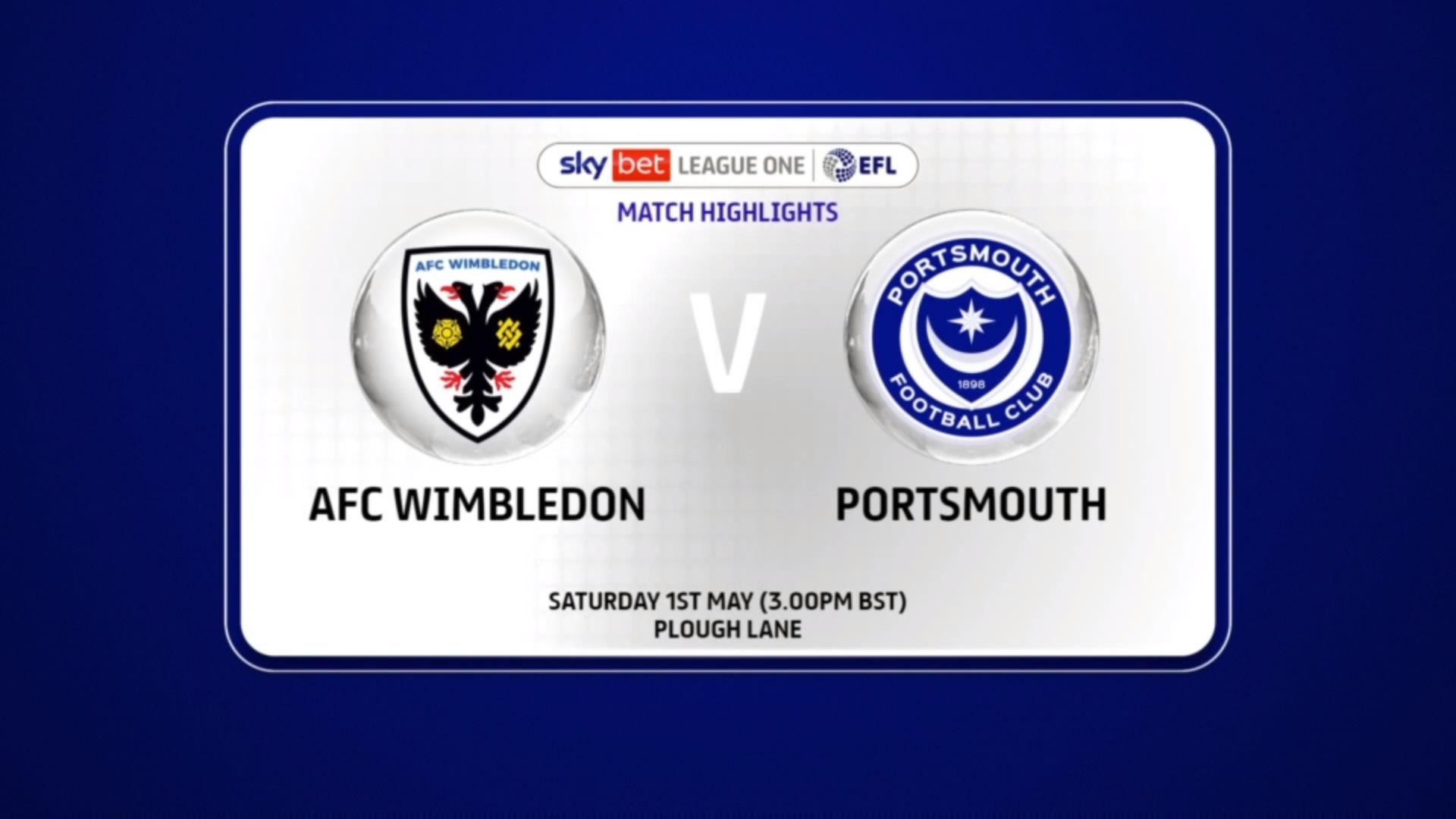