Pompey and Lincoln had both enjoyed bulldozing past whatever was put in front of them in recent weeks.

But the duo were stopped in their tracks at the weekend, with the Blues losing at home to Charlton and the Imps defeated at Doncaster.

So a return to winning ways will be the focus of Kenny Jackett and Michael Appleton when the pair clash at Sincil Bank this evening (7pm kick-off).

The latter had led his side to the top of the League One pile before that Keepmoat Stadium reverse dropped them to third position.

They are still four places – and five points – above Pompey, who will be looking to close that gap and climb back into the play-off spots.

City’s only loss on their own patch in the league came at the hands of Bristol Rovers last month, although they were also thrashed 7-2 by top-flight champions Liverpool in the Carabao Cup.

You have to go back 40 years to find the last time Lincoln came out on top in a meeting between the teams – although there have been just six encounters since.

Pompey won both contests last season, with Ronan Curtis and John Marquis on target in a 2-0 victory at Sincil Bank.

TEAM NEWS
Jack Whatmough is set to be out for around three weeks with a hamstring problem, with Rasmus Nicolaisen likely to replace him in defence.

Michael Jacobs (knee) is still sidelined, but Ellis Harrison returned to the pitch against Charlton on Saturday.

Lincoln will be without the injured trio of Liam Bridcutt (thigh), Callum Morton (shoulder) and Joe Walsh (knee), while Max Melbourne (thigh) is also a doubt.

VIEW FROM THE DRESSING ROOM
Read the thoughts of Kenny Jackett and Sean Raggett ahead of the game. 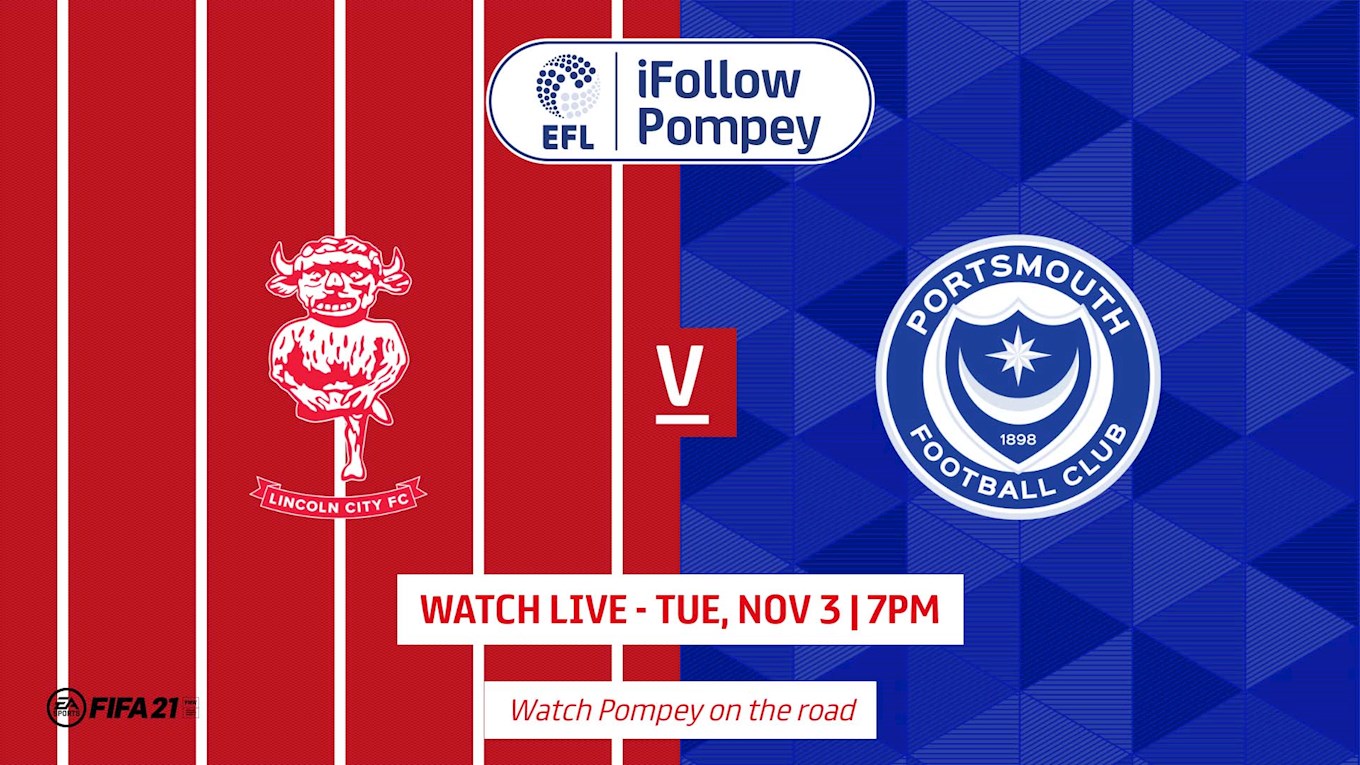 BETTING
Pompey are the 11/8 favourites with Sky Bet to secure all three points, while the hosts can be backed at 7/4. 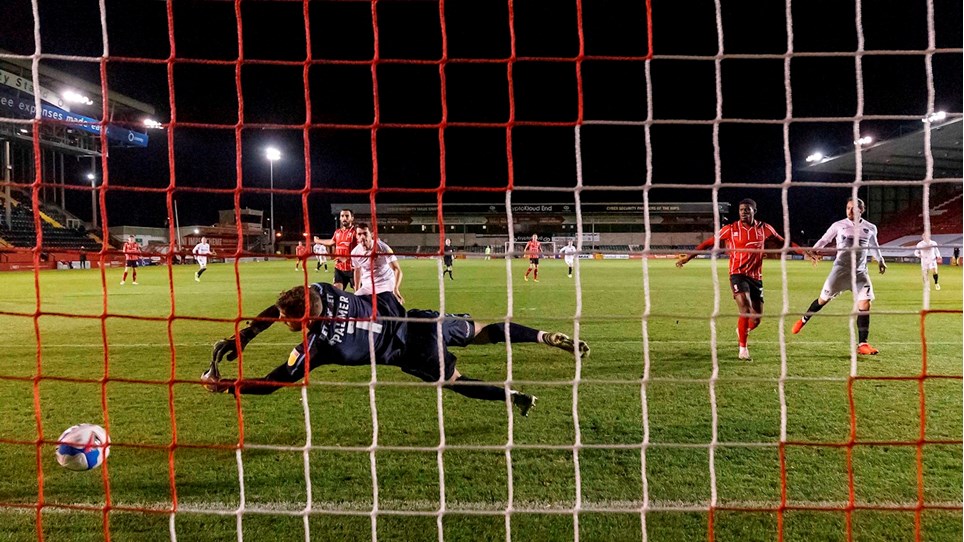 
Pompey enjoyed a convincing victory at Lincoln to continue their fine run of away form. 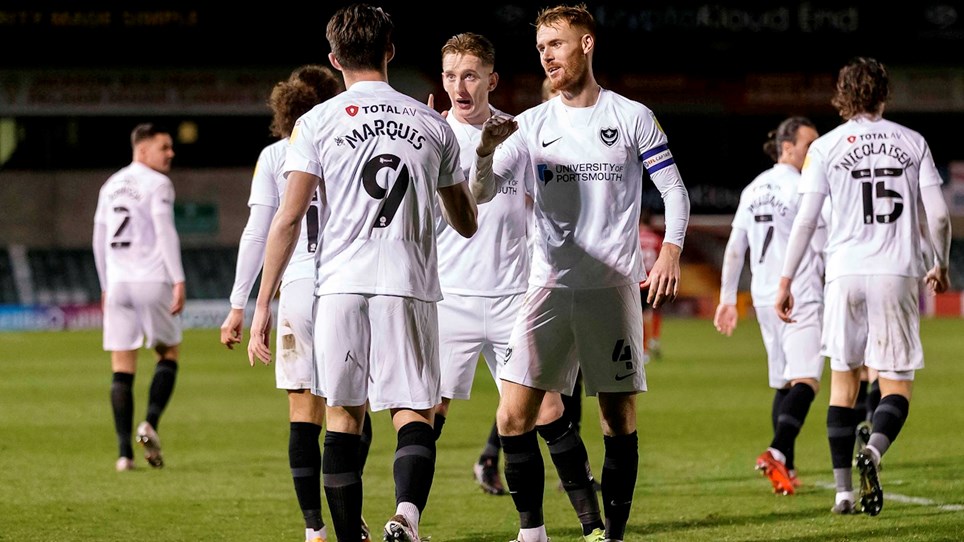 
Pompey's fine record on the road continued as they enjoyed a convincing victory at Lincoln.


John Marquis is the third tier’s current top scorer, having already found the net on seven occasions this season. 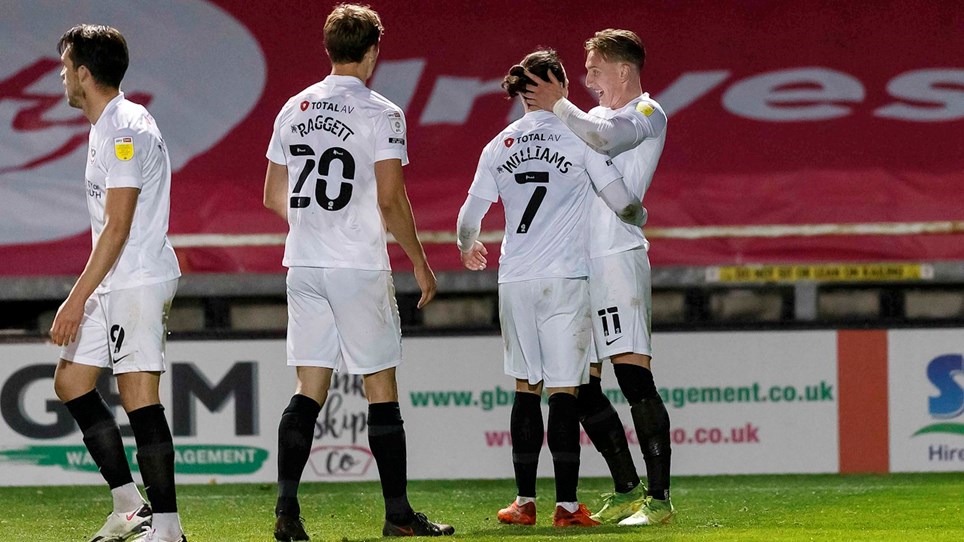 John Marquis bagged a brace to ensure Pompey maintained their excellent away record with a convincing win at Lincoln.

The striker was teed-up by Marcus Harness in the fifth minute of each half to give the visitors a commanding lead.

There were a hatful of chances for the Blues to extend their advantage and Ronan Curtis duly took one of them before Tom Hopper grabbed an Imps consolation.

Kenny Jackett made one change from the side that were beaten on home soil by Charlton at the weekend.

It was an enforced one, as Jack Whatmough’s hamstring injury presented Rasmus Nicolaisen with a first League One start.

But the Blues boss was forced to make a further switch when Lee Brown also hurt his hamstring in the warm-up.

Cam Pring was elevated from the bench to the left-back berth, with Alfie Stanley taking his spot among the substitutes.

But the late alteration did not seem to affect the visitors, who got the contest of to a blistering opening.

Harness slipped a neat pass through to Ryan Williams, whose low drive was saved by Imps keeper Alex Palmer on four minutes.

And the duo were involved again when the deadlock was broken in Pompey’s favour just a few moments later.

They combined to find MARQUIS in the box, with the striker cutting onto his right foot and curling home a sumptuous finish.

In truth, though, there were not abundance of clear-cut opportunities at either end of the pitch in the first half.

The Blues were showcasing some patient passing build-up play, but a final killer ball was lacking as they went in search of a second goal.

Lincoln grew into the contest and when Craig MacGillivray could only punch away a corner, Tom Naylor threw himself into the path of Sean Roughan’s shot.

Robbie Gotts then tried a long-range curling effort that flew safely into the hands of the Blues keeper.

Nicolaisen was proving a composed presence in the back-line and made one fine sliding challenge to dispossess Brennan Johnson.

Pompey picked up the pace as the interval drew close, but when Williams cut the ball back for Naylor, the skipper’s strike was bravely blocked by Adam Jackson.

The visitors were quickly out of the traps when the action resumed and Curtis hit a 25-yard effort that dipped not too far over the bar.

And the lead was soon doubled when Harness curled a superb delivery into the box and Palmer could not get enough of a hand on MARQUIS’ header to stop it finding the net.

Things might have got even better for the Blues, but Williams was unable to beat Palmer from an acute angle.

The chances kept coming and the Australian winger stooped to meet Callum Johnson’s cross, but glanced his header wide.

Pring then cut the ball back for Harness, whose fierce drilled effort was deflected narrowly past the post.

Pompey were rampant and looking dangerous with every attack, as Williams collected a threaded Curtis pass and rounded Palmer.

He then fired the ball across the face of goal, where Marquis – sensing a hat-trick – dived in, but could not quite make contact.

But a third goal did arrive just past the hour mark, with CURTIS on hand to drill home when Palmer saved Williams’ initial effort.

That failed to dampen their attacking enthusiasm, though, and Palmer had to be at his best to keep out a header from the lively Williams.

But Lincoln had a lifeline on 73 minutes when Hopper headed in a Harry Anderson delivery from a few yards out.

The visitors were still posing a threat and when the newcomer chested the ball down, Williams’ effort was deflected narrowly wide.

Jackett was able to use all his changes as the minutes ticked down, with Bryn Morris and Haji Mnoga both getting time on the pitch – the latter making his league debut.

And Pompey saw out the closing stages with relative ease, as they continued to enjoy life on the road.


Pompey enjoyed a convincing victory at Lincoln to continue their fine run of away form.


Pompey's fine record on the road continued as they enjoyed a convincing victory at Lincoln.


John Marquis is the third tier’s current top scorer, having already found the net on seven occasions this season. 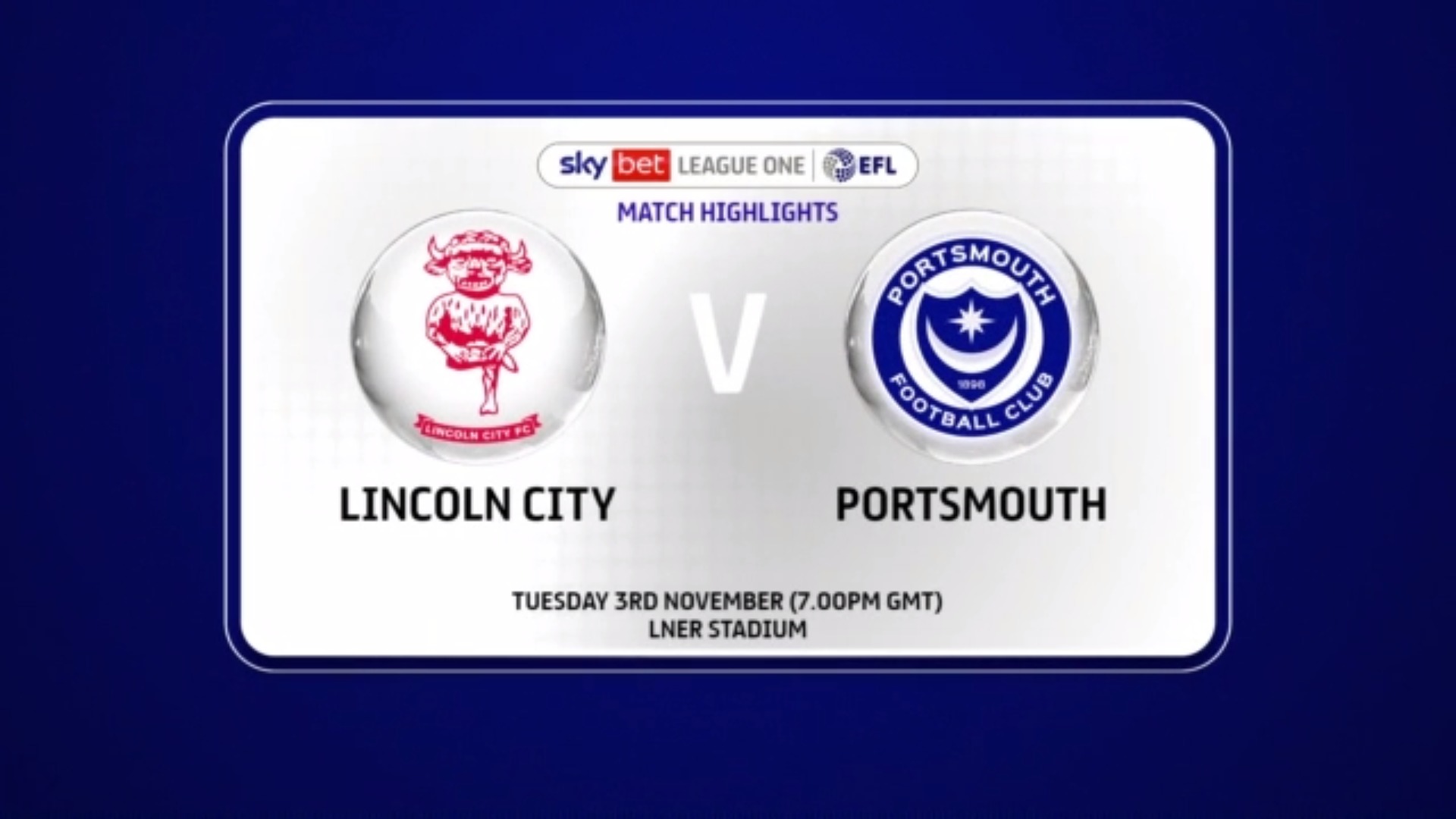 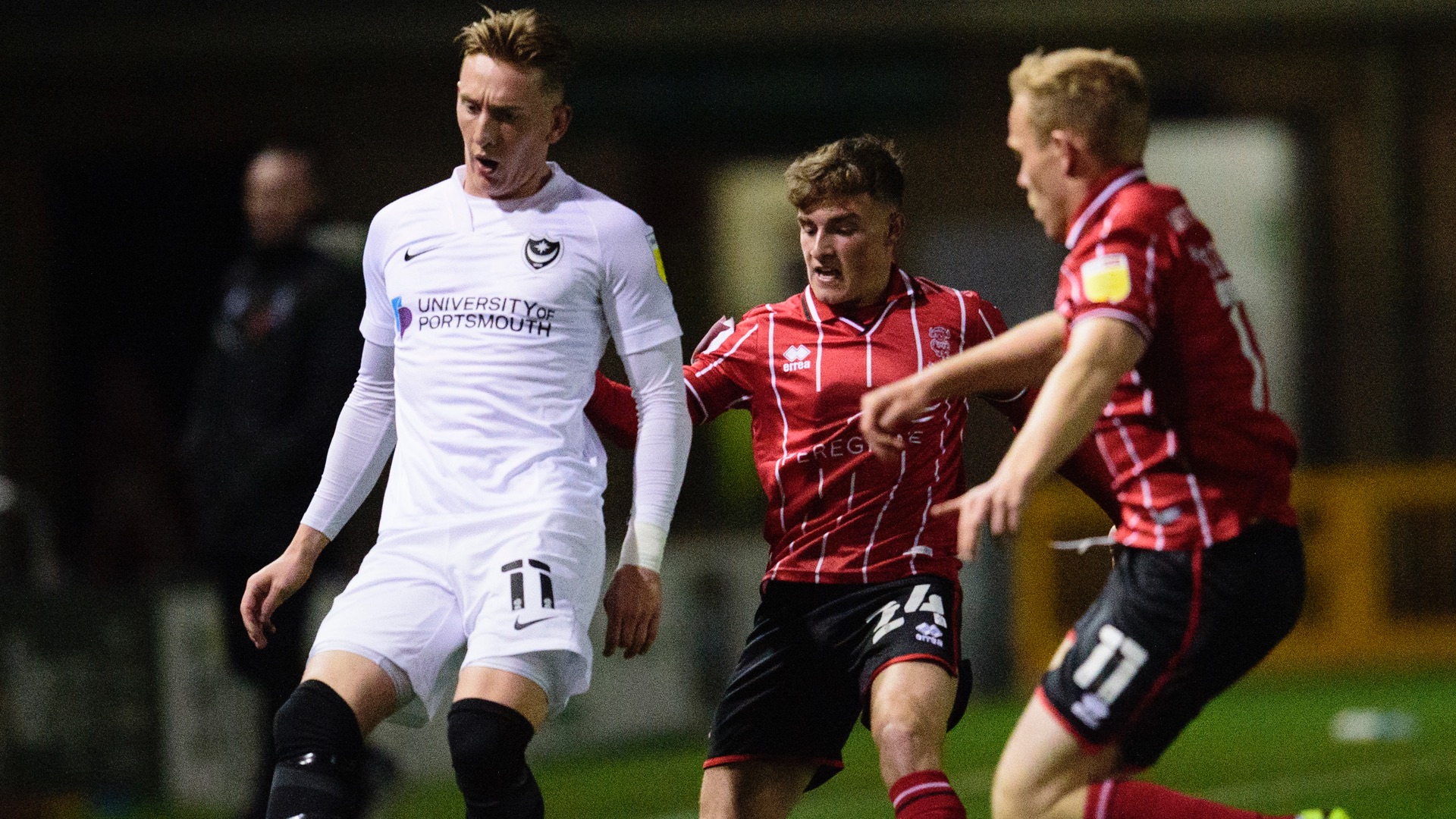 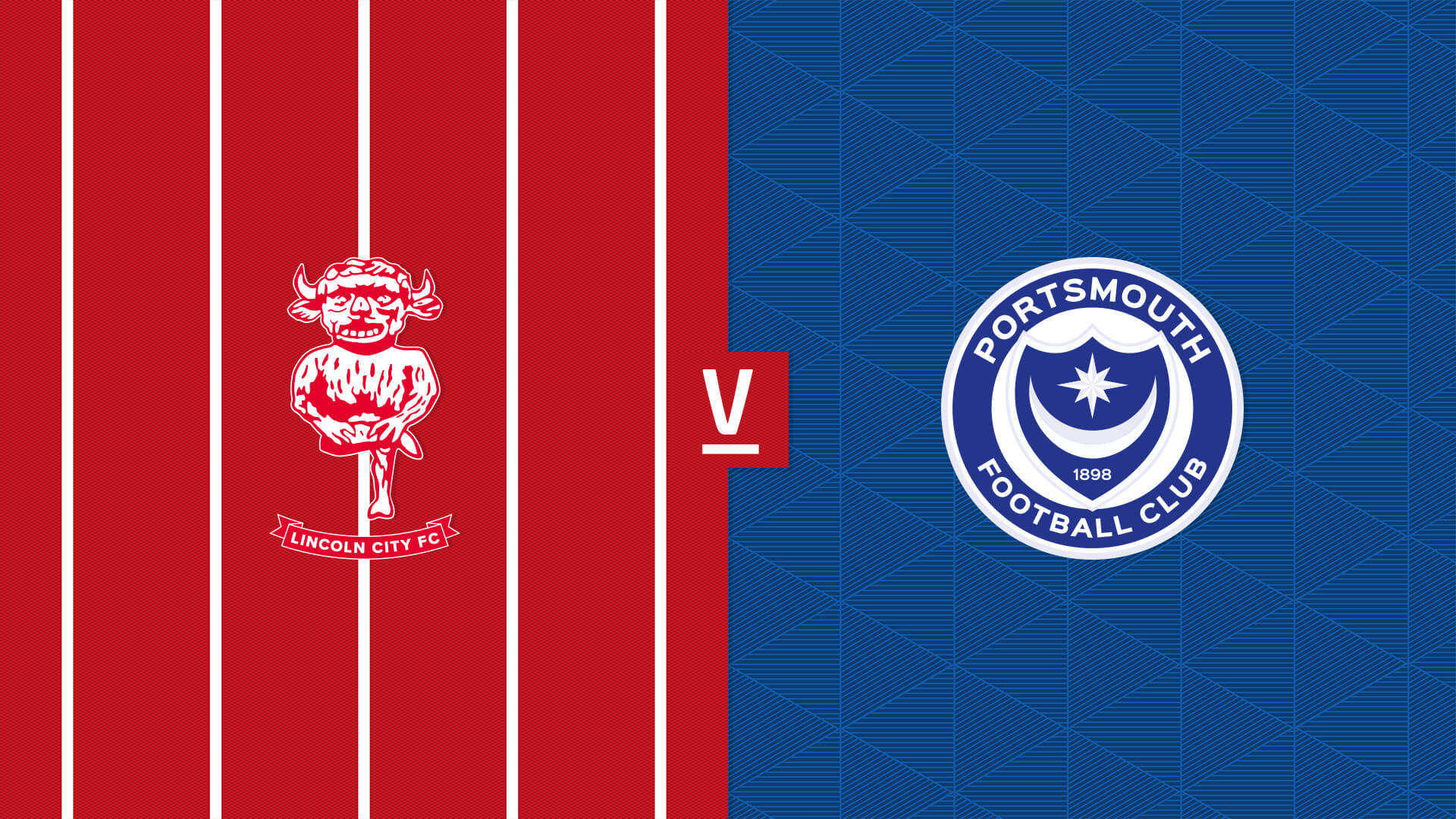