Pompey will try to make it a hat-trick of victories when they welcome MK Dons to Fratton Park this weekend.

Kenny Jackett’s side go into the contest on the back of wins at Burton and Southend in the league and EFL Trophy respectively.

And now they will be determined to build on that by collecting a first three-point haul of the season on the south coast.

Their opponents are currently propping up the third tier table and did not taste success in any of their opening four games.

However, one of their two points came against high-flying Ipswich last week, with Daniel Harvie cancelling out Jon Nolan’s early opener.

And the Dons did win 3-2 at Stevenage in the EFL Trophy on Tuesday evening, with young striker Jay Bird bagging a brace.

Russell Martin’s men ended up in 19th position last term, once the table had been adjusted for points per game.

And they were beaten 3-1 at Fratton Park, as Andy Cannon, John Marquis and Marcus Harness all found the target.

TEAM NEWS
Pompey have no injury concerns, with skipper Tom Naylor having recovered from a slight knock to his ankle.

MK Dons will be without defensive duo Daniel Harvie and Regan Poole, who are on under-21 international duty with Scotland and Wales respectively.

Kieran Agard, Ben Gladwin, Sam Nombe and Warren O’Hora are all injury doubts for the visitors, but Louis Thompson is available again.

VIEW FROM THE DRESSING ROOM
Read the thoughts of Kenny Jackett and Rasmus Nicolaisen ahead of Saturday’s game.

Please note that the match has been selected for international broadcast, meaning that most overseas fans will not be able to watch on iFollow. Click here for more details.

BETTING
Pompey are the 8/13 favourites with Sky Bet to secure all three points, while the hosts can be backed at 4/1. 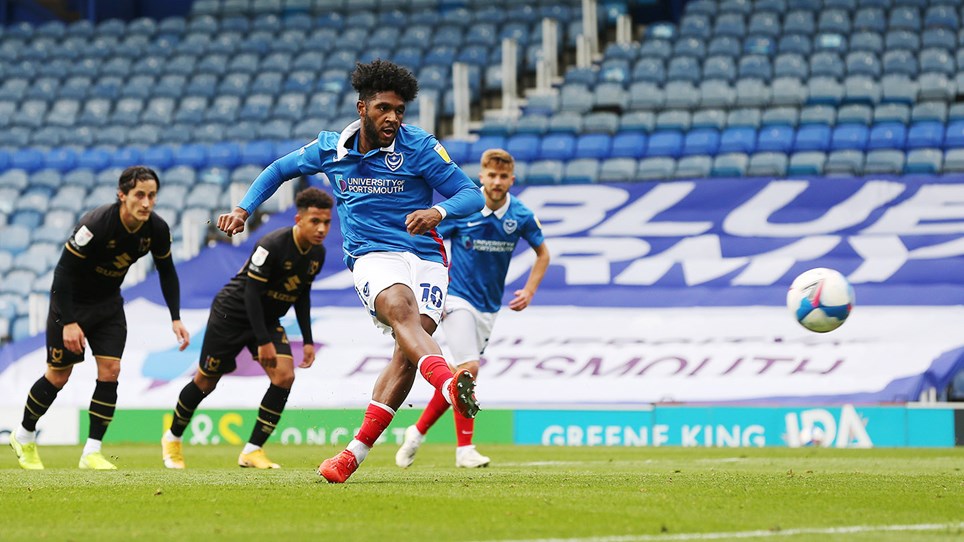 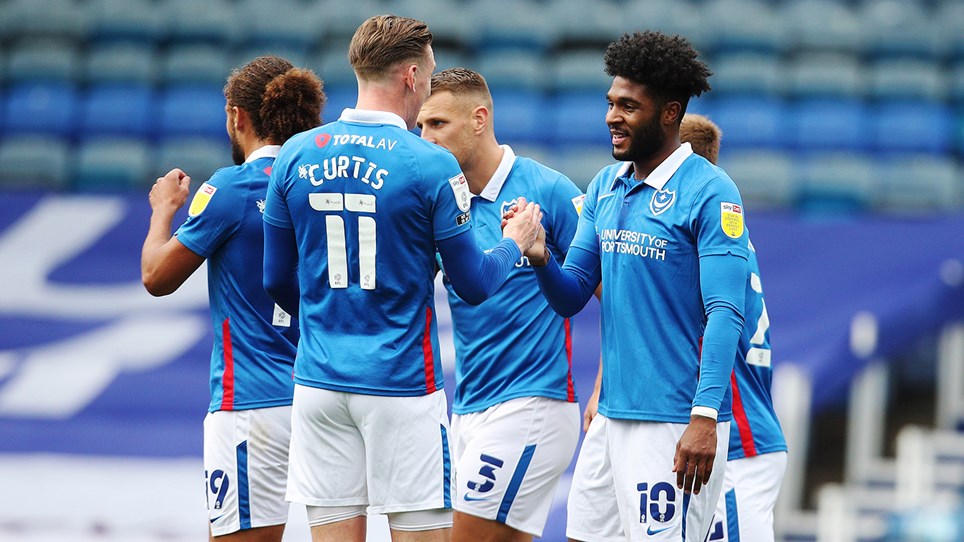 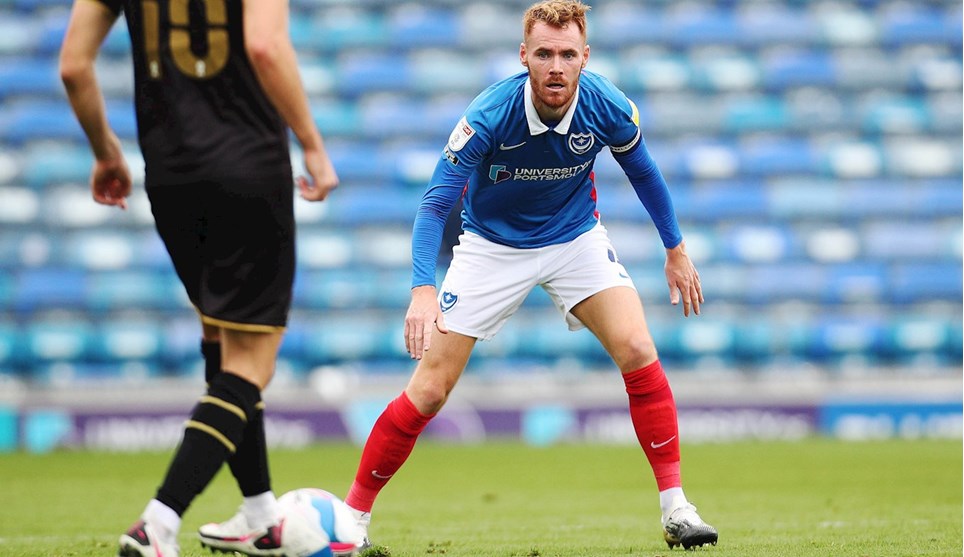 Pompey recorded a third successive victory – but were left hanging on against MK Dons at Fratton Park.

Tom Naylor headed the hosts into an early lead, only for the men from Milton Keynes to level through Scott Fraser’s spot-kick.

The Blues were awarded a first half penalty of their own, however, and it was converted by Ellis Harrison.

It was a nervy affair after the interval and the Dons dominated possession, but could not find a leveller.

Kenny Jackett made one change from the side that were so impressive in victory at Burton the previous week.

Ronan Curtis – who bagged a brace against Southend in the EFL Trophy on Tuesday night – replaced Ryan Williams out wide.

The visitors looked to attack straight from kick-off, but their opponents immediately broke up the other end and Harrison’s ball across goal was just out of reach for Marcus Harness.

And then – for the second league match in succession – the Blues broke the deadlock in the second minute.

Lee Brown whipped in a corner from the right and NAYLOR was left in space to head the ball off the underside of the bar and over the line.

But the Dons were soon given a chance to draw level when Bryn Morris was penalised for a clumsy challenge on Louis Thompson inside the box.

Fraser stepped up to take the spot-kick and stroked the ball straight down the middle, with Craig MacGillivray going low to his right.

Both sides were looking to get forward whenever possible, although were lacking that final killer ball to test the keepers.

And Lee Swabey evened things up midway through the first half, with the referee spotting George Williams’ push on Sean Raggett from a corner.

Lee Nicholls got his fingertips to the penalty from HARRISON, but there was too much power on the shot to keep it from flying into the net.

Dons boss Russell Martin was incensed with the decision and his furious reaction earned a yellow card.

Pompey tried to extend their advantage further, but Michael Jacobs could not quite dig the ball out from under his feet after being found in space by Naylor.

At the other end, Carlton Morris looked to have got past Jack Whatmough, only for the defender to make a fine recovery and dispossess the striker.

Then, in stoppage-time, Sam Nombe hit a fierce long-range effort that MacGillivray had to palm around the post.

Jackett made a change of personnel and system after the interval, with Curtis withdrawn so Rasmus Nicolaisen could make his league debut.

That saw Pompey switch to a 3-4-1-2 formation, as Jacobs moved behind the front two of Harness and Harrison.

It was the visitors who started the half brighter, however, and MacGillivray denied Carlton Morris before Naylor was forced to block Fraser’s effort.

The keeper then needed a bandage applied to his head after colliding with team-mate Nicolaisen, with both players requiring treatment.

It did not seem to do MacGillivray much harm, though, as the keeper immediately made a fine save to turn behind Nombe’s angled effort.

Pompey then came close to scoring a third goal on the hour mark, when Harrison cut in from the left side of the area.

The striker was unable to force a fierce shot past Nicholls from an acute angle, though, and David Kasumu was able to hack away the loose ball.

It had turned into a fairly open affair and MacGillivray was called into action to deal with Nombe’s strike from the edge of the box.

A free-kick – which earned Dean Lewington a booking – then led to Raggett finding the net, although the flag had long since been raised for an offside against Whatmough.

And the defender almost scored at the other end soon after, turning Carlton Morris’ dangerous pass inches past his own post.

With the Blues looking to stem the tide, John Marquis was brought on for Harness for the final 10 minutes.

The hosts conceded several free-kicks in dangerous areas as the seconds ticked down and the Dons poured forward in search of an equaliser.

A display of five additional minutes was not what Pompey wanted to see, but they saw the time out to secure a welcome three points. 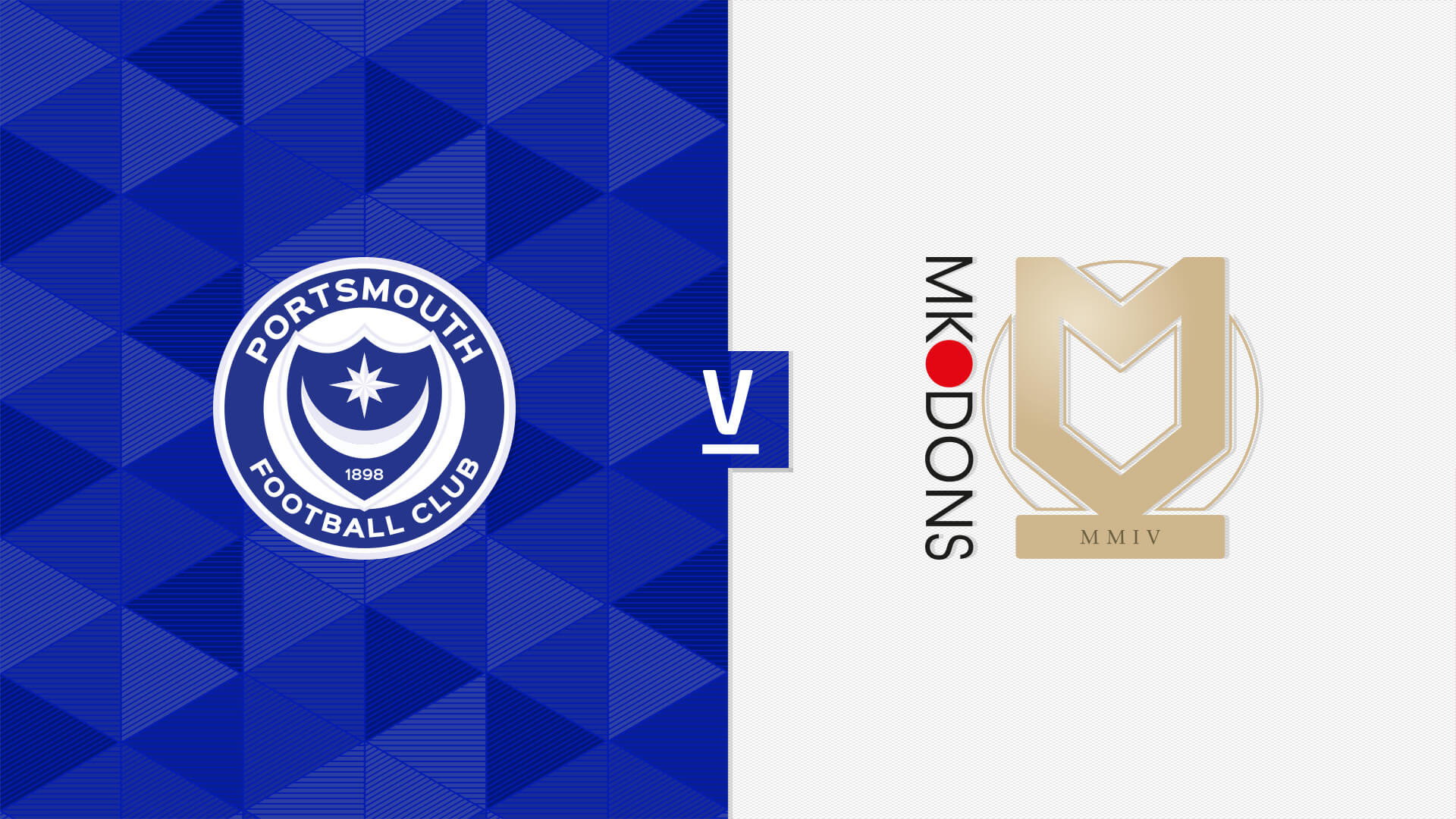 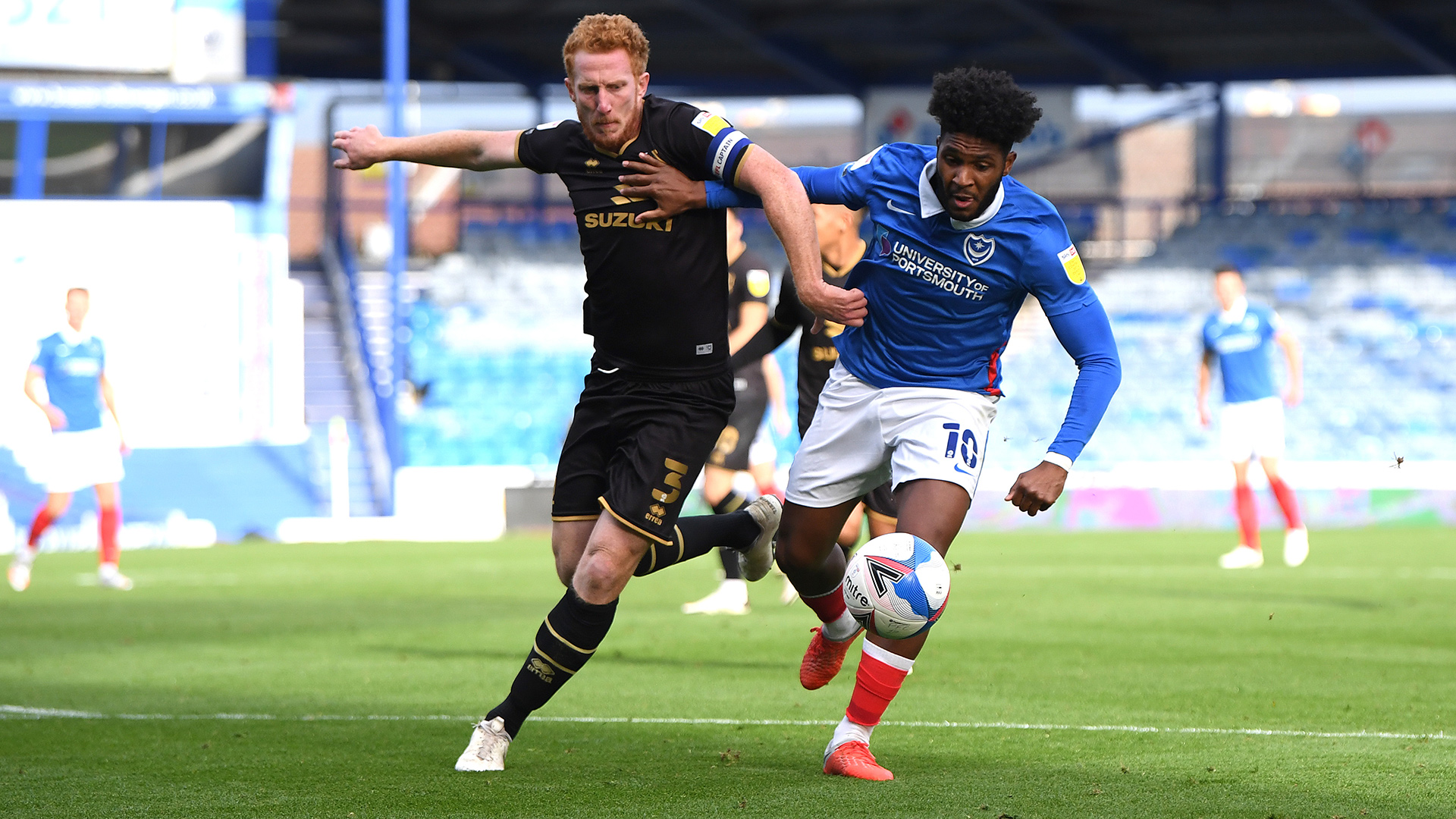 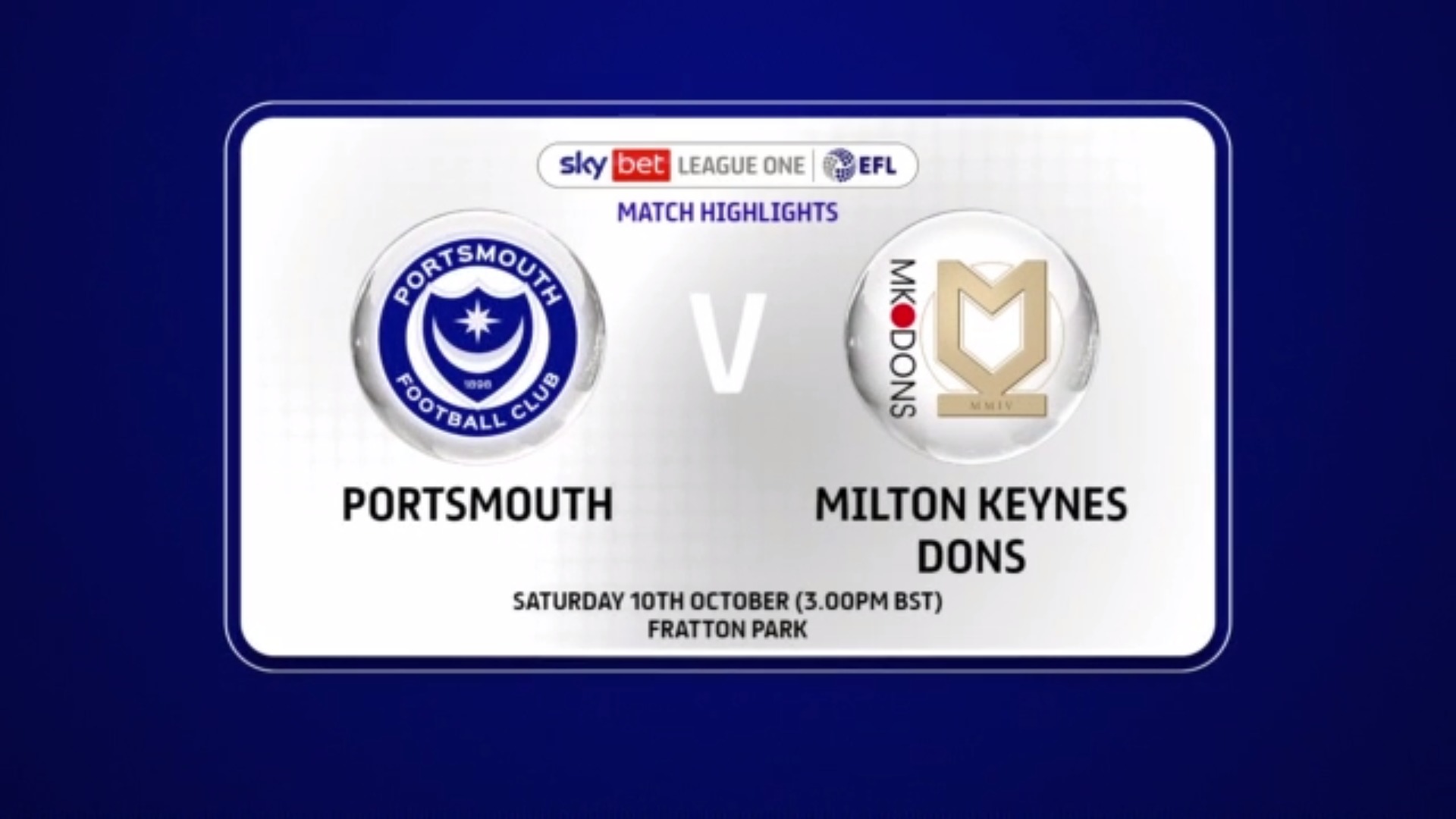