It will be their third fixture in less than a week, with the previous two resulting in wins over Rotherham and Lincoln.

Their opponents are desperate for points in the fiercely contested battle to beat the drop from League One.

The Shrimps currently have the upper hand, however, and sit three points above that dreaded dotted line.

Derek Adams had left his role as manager after leading the side to fourth tier play-off glory at Wembley last season.

But he returned to replace Stephen Robinson, who departed the Mazuma Stadium to take charge of St Mirren in February.

And Paul Cook’s old sparring partner has helped guide the Lancastrians to three victories from their past four games, including Friday’s 3-2 success at Charlton.

Pompey are looking to triumph on Morecambe’s patch for the first time, having drawn two and lost two of their previous four visits.

They did come out on top when the sides met on the south coast before Christmas, however, courtesy of goals from Marcus Harness and Connor Ogilvie.

Denver Hume (back) is closing in on being available again, while Joe Morrell went off on Friday with a dead leg.

Morecambe defender Ryan McLaughlin could miss out again, having been absent through injury for the past couple of matches.

VIEW FROM THE DRESSING ROOM
Read the thoughts of Danny Cowley and Michael Jacobs ahead of the game.

TICKETS
Pompey fans can purchase tickets by visiting the away ticket office at Morecambe (next to turnstiles 3-4) on the day of the game.

This is the same place to visit for any supporter who needs to collect tickets that have already been bought.

BETTING
Pompey are the 11/10 favourites with VBET to secure all three points, while the hosts can be backed at 23/10. 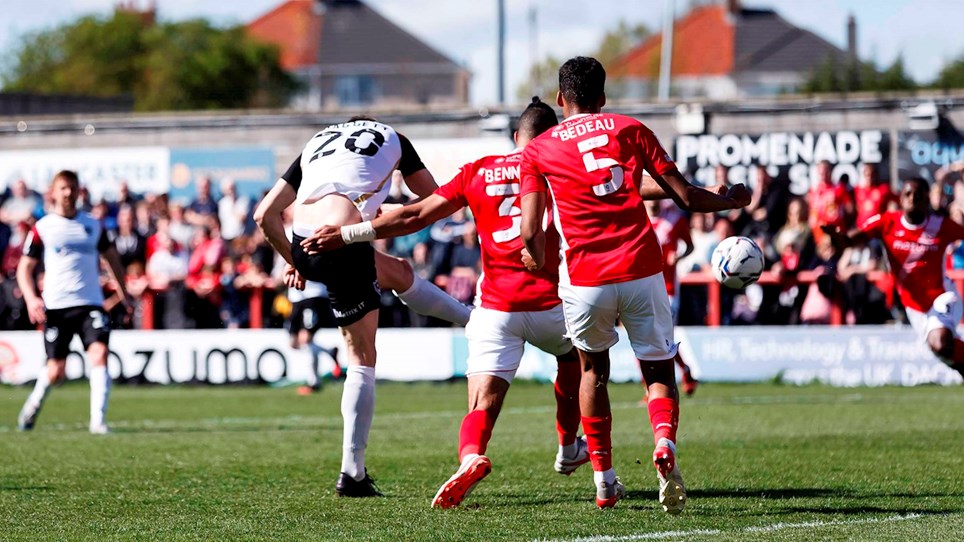 
Pompey had to settle for a point at Morecambe after conceding a controversial goal right at the death. 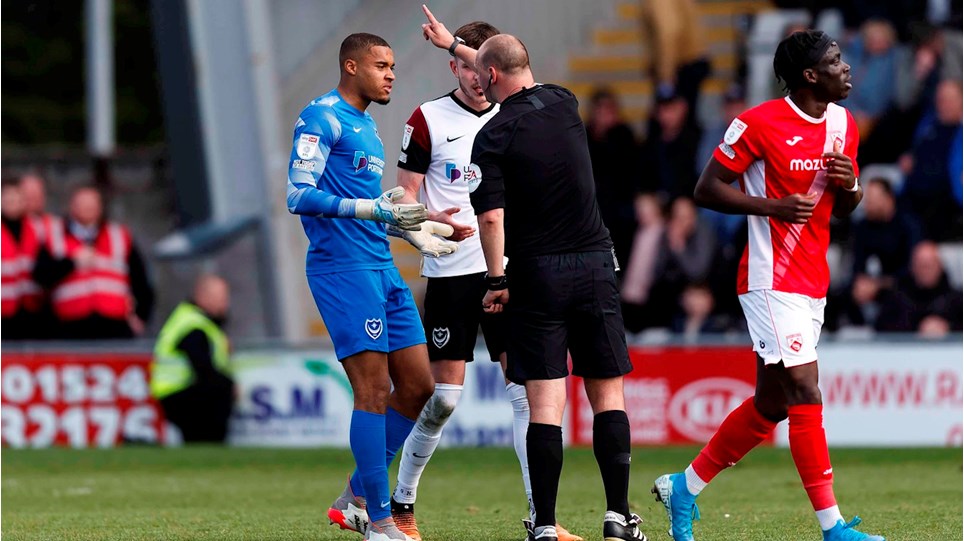 
Pompey were denied victory at Morecambe after conceding a controversial stoppage-time equaliser. 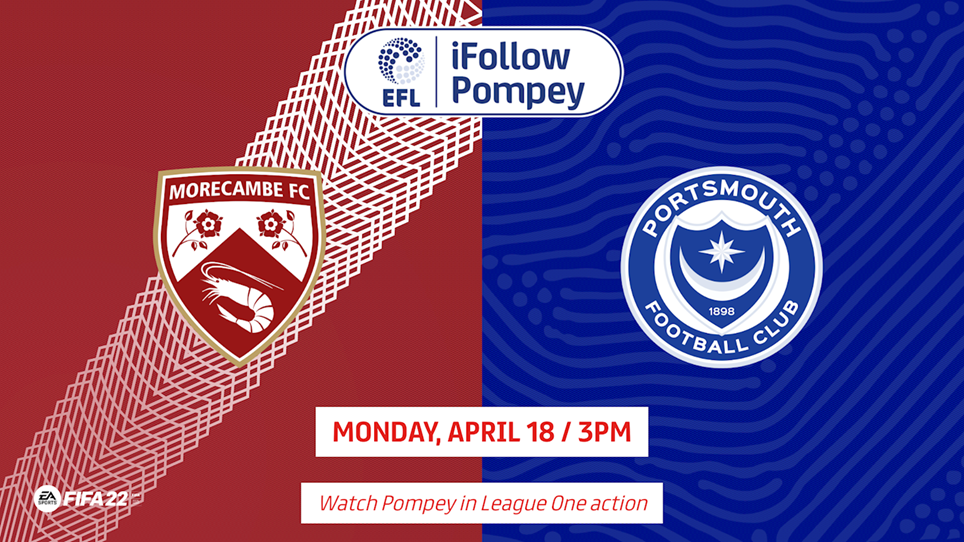 
Pompey fans in the UK and around the world can watch this afternoon’s clash with Morecambe live on iFollow.

by Neil Weld at the Mazumua Stadium

Pompey were denied a third successive League One victory after conceding deep into stoppage-time at Morecambe.

A moment of magic from Sean Raggett looked to be enough to earn all three points for the battling Blues.

But substitute Jonah Ayunga controversially converted in a congested penalty area right at the death to boost the Shrimps’ hopes of beating the drop.

Danny Cowley made three changes from the side that secured a dramatic win over Lincoln on Good Friday.

Ronan Curtis was rewarded for coming off the bench to net the winner, while there were also starts for Ryan Tunnicliffe and Shaun Williams.

Aiden O’Brien and Louis Thompson dropped to the bench and Joe Morrell missed out completely after going off early against the Imps with a dead leg.

Trevor Carson started between the sticks for the home side, who had fellow former Fratton loanee Toumani Diagouraga on the bench.

The visitors started brightly and when Clark Robertson nodded the ball down, Raggett had a shot blocked and Tunnicliffe then fired over.

But it was Morecambe who began to look more threatening and Dylan Connolly bent the ball inches past the post after Cole Stockton’s pass sent him racing away.

Williams tried his luck at the other end of the pitch, but although his effort was cleanly struck, it flew straight into Carson’s arms.

Pompey then had Gavin Bazunu to thank for a series of smart stops that prevented the home side from forging ahead.

He just about got his fingertips to a low Arthur Gnahoua shot to tip the ball against the inside of the post, where it then ricocheted to safety.

And the keeper was at it again moments later to prevent Stockton from turning home a Greg Leigh delivery.

The danger was not over, though, and Bazunu had to recover quickly to save the striker’s follow-up effort with his feet.

It was not until the end of the first half that the Blues began to find a bit of rhythm and pass the ball around with fluidity.

And they made their late pressure count when Robertson lifted a pass into the box and Curtis rose to nod it into the mixer.

The ball fell to the feet of RAGGETT, who brought it under control and spun before hooking a superb shot against the upright and into the net.

Leigh threatened for the hosts once the action restarted, but after doing the hard work to get into a good position, he dragged his effort wide

George Hirst then got forward at the other end and bent an attempt narrowly off target in a lively opening to the half.

But the Blues were almost undone in comical fashion on 54 minutes, when there was hesitation over who should deal with a pass through the defence.

Bazunu eventually came out to clear and kicked the ball against Gnahoua, with the ricochet sending it inches past the post.

Ousmane Fane then teed-up Stockton with a square pass across the edge of the box, only for the striker to fire straight at Bazunu.

Cowley responded with a couple of changes just past the hour mark, as Williams and Michael Jacobs made way for Thompson and O’Brien.

Pompey were looking for a second goal and Hirst fired a low shot wide after doing well to nab possession on the edge of the box.

A final throw of the dice from Cowley came on 72 minutes, with Mahlon Romeo on for Marcus Harness.

That came after a Bazunu clearance had been charged down by Adam Phillips and the ball flew wide, while the Morecambe midfielder then wastefully shot wide after being found by Stockton.

The hosts stepped up the pressure in search of a late leveller and Diagouraga thought he had found one, only for referee Robert Madley to spot a hand being used as the ball was bundled into the net.

But they were finally able to celebrate deep into stoppage-time when Bazunu came to collect a Leigh corner.

He was unable to hold on amidst a sea of bodies, though, and Ayunga forced the ball home, with Madley ignoring Pompey appeals for what looked to be a foul.


Pompey had to settle for a point at Morecambe after conceding a controversial goal right at the death.


Pompey were denied victory at Morecambe after conceding a controversial stoppage-time equaliser.


Pompey fans in the UK and around the world can watch this afternoon’s clash with Morecambe live on iFollow. 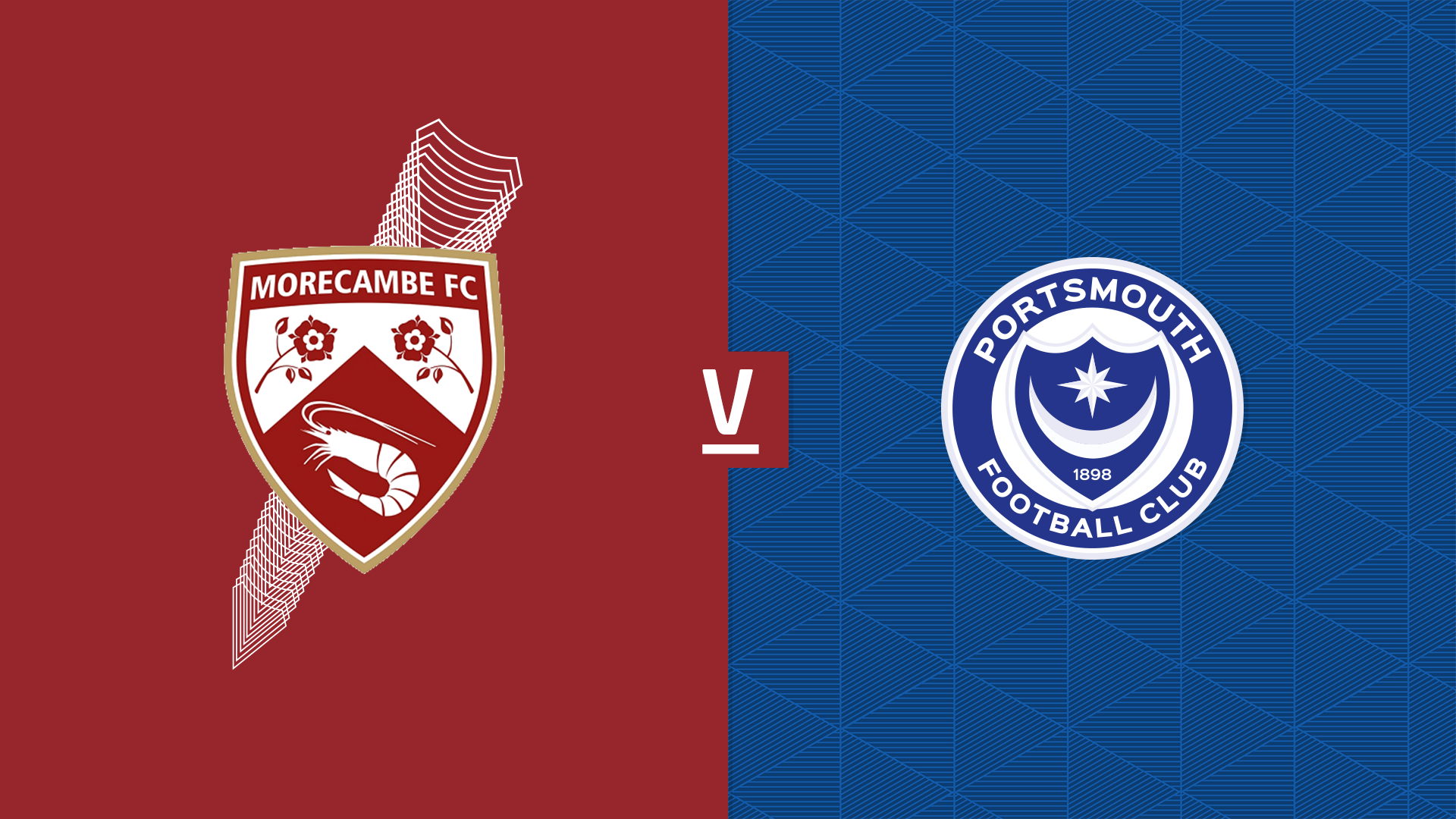 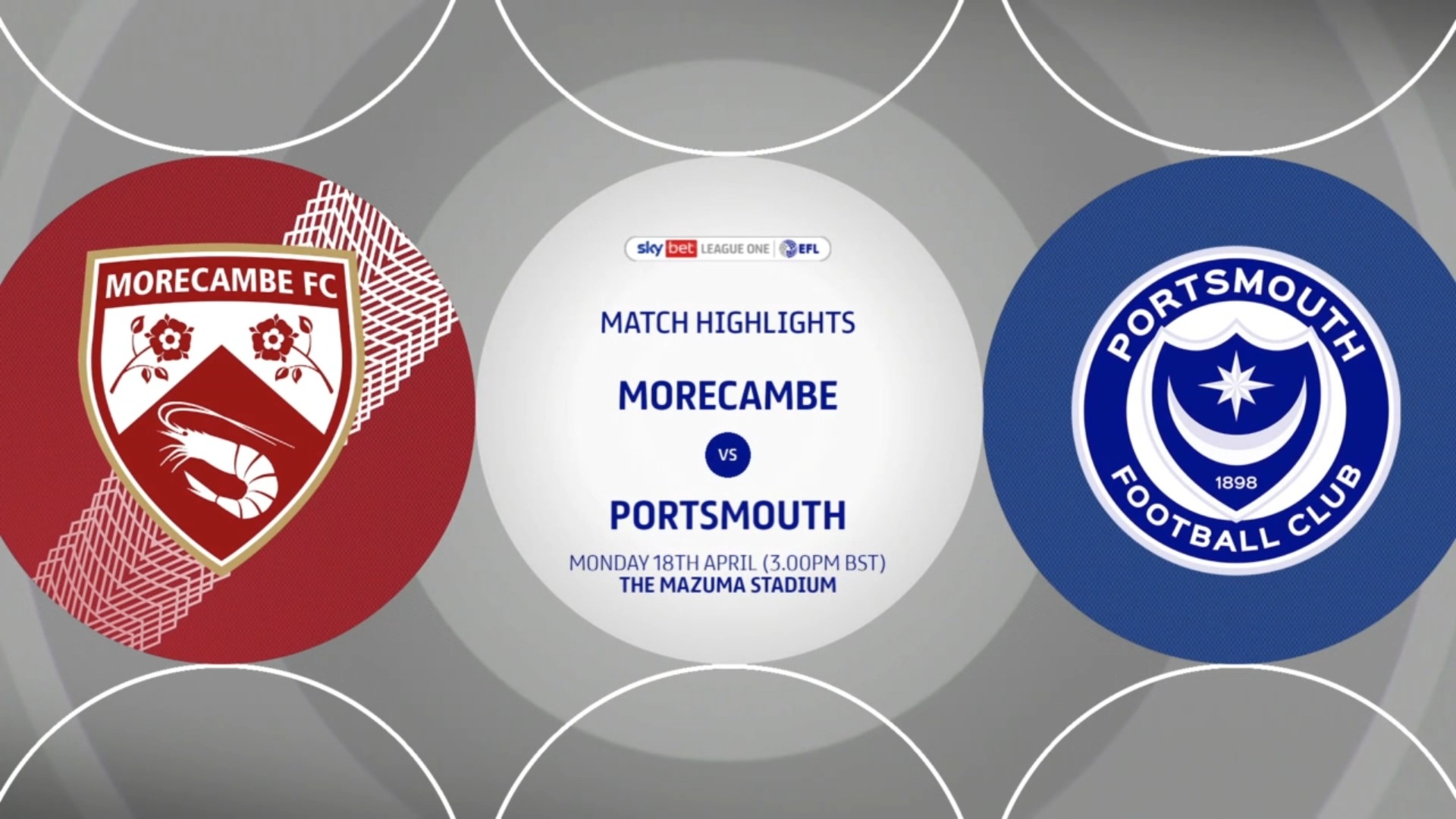 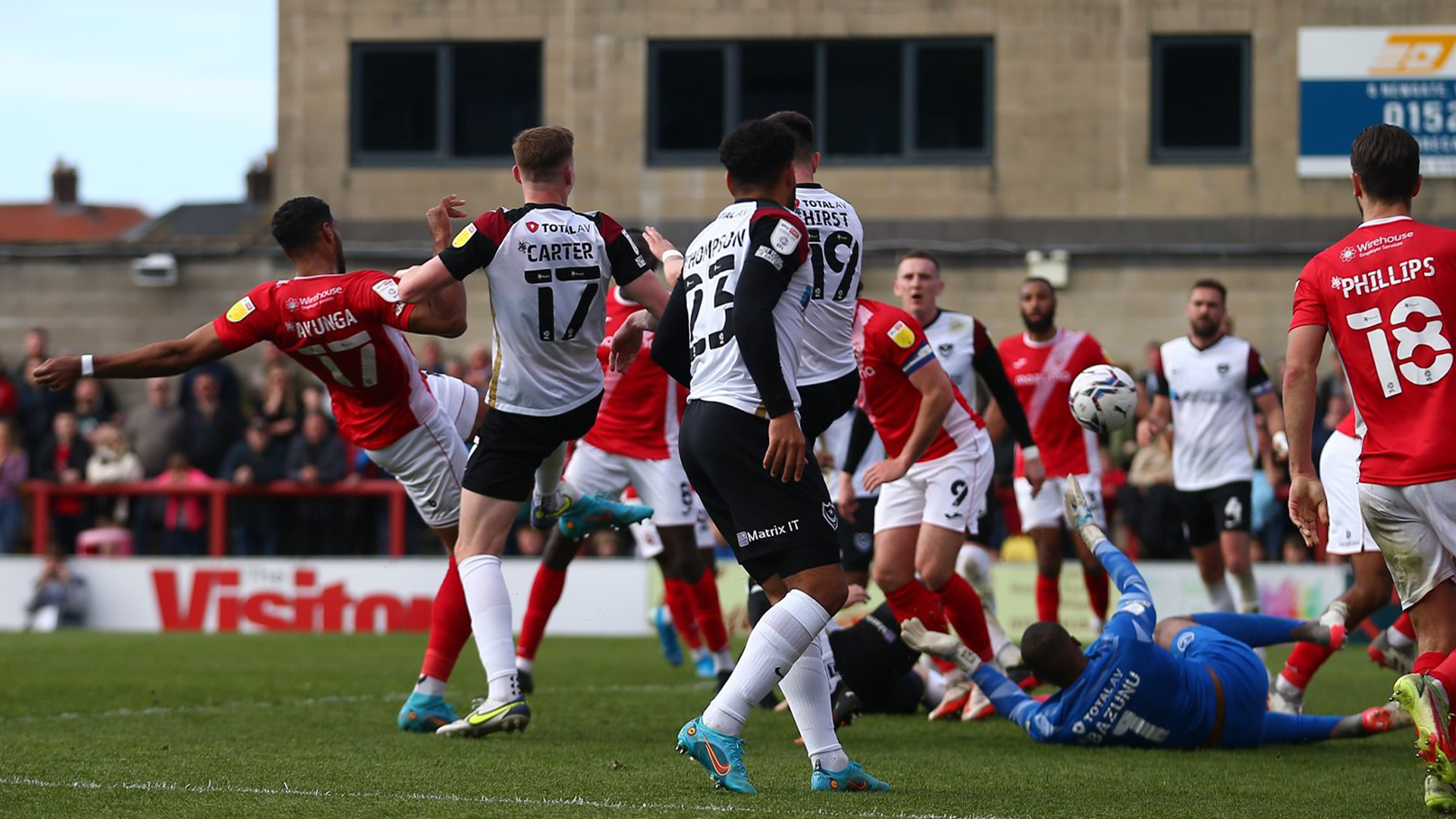