With the season’s finish line fast approaching, the games continue to come thick and fast for Pompey.

They travel to Morecambe on Easter Monday after first returning to Fratton Park for a Good Friday contest with Lincoln (3pm kick-off).

There are plenty of connections between the two teams, with Joe Morrell, Sean Raggett and Tyler Walker for the hosts, and Chris Maguire and John Marquis for the visitors, all having previously been employed by the other club.

Both managers also had spells in charge of their opponents, although will probably have contrasting feelings about their time at the helm.

Michael Appleton certainly underwent a turbulent experience after the Blues went into administration soon after he took charge.

The memories will be fonder for Danny and Nicky Cowley, who helped lead Lincoln into League One from the National League.

They were also in charge when the Imps became the first non-league club to reach the FA Cup quarter-finals for more than a century, with Raggett getting the winner against top-flight Burnley in 2017.

The men from Sincil Bank currently sit 18th and are not completely safe from the drop, although do hold a healthy eight-point gap to the bottom four.

City were 1-0 winners on their trip to the south coast last season, but goals from Marcus Harness, George Hirst and Reeco Hackett saw the Blues ease to a 3-0 victory at Sincil Bank earlier in the current campaign.

Denver Hume (back) is closing in on being available again, while Marcus Harness (knee), Michael Jacobs (hamstring) and Louis Thompson (hip) are all doubts.

Lincoln have been hit by the news that Liam Bridcutt will miss the remainder of the campaign with a quad problem.

VIEW FROM THE DRESSING ROOM
Read the thoughts of Danny Cowley and Hayden Carter ahead of the game.

TICKETS
Pompey fans can secure tickets online here or, subject to availability, from the booth behind the Fratton End on Saturday.

Season ticket holders in Blocks T-W of the South Lower have been contacted with their new seat details and been sent a new season card. Please contact the ticket office if you have not received this.

A matchday magazine will be available to purchase from sellers around the ground, online from the memorabilia store, in the club shop, the Victory Bar and selected kiosks.

The Victory Bar will be open for Pompey fans from midday on Saturday.

BETTING
Pompey are the 4/6 favourites with VBET to secure all three points, while the visitors can be backed at 15/4. 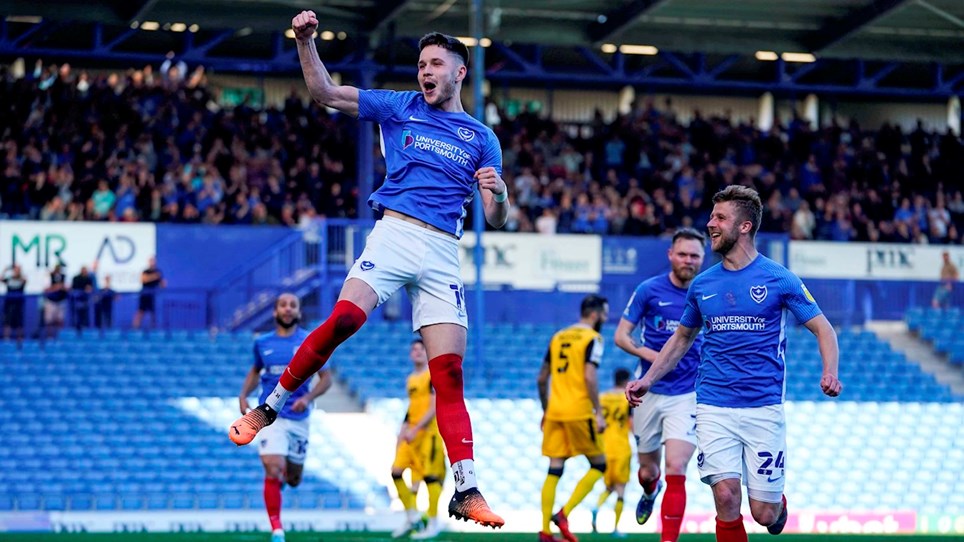 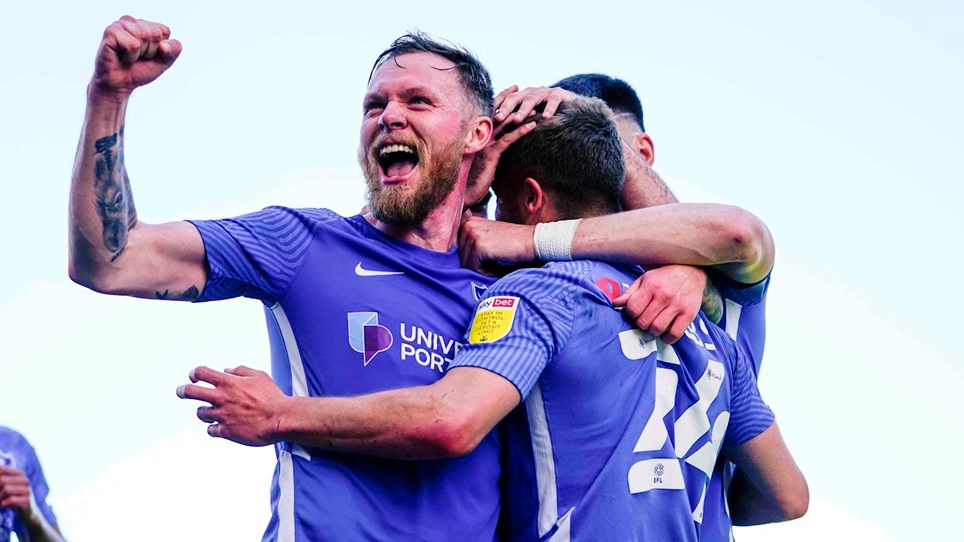 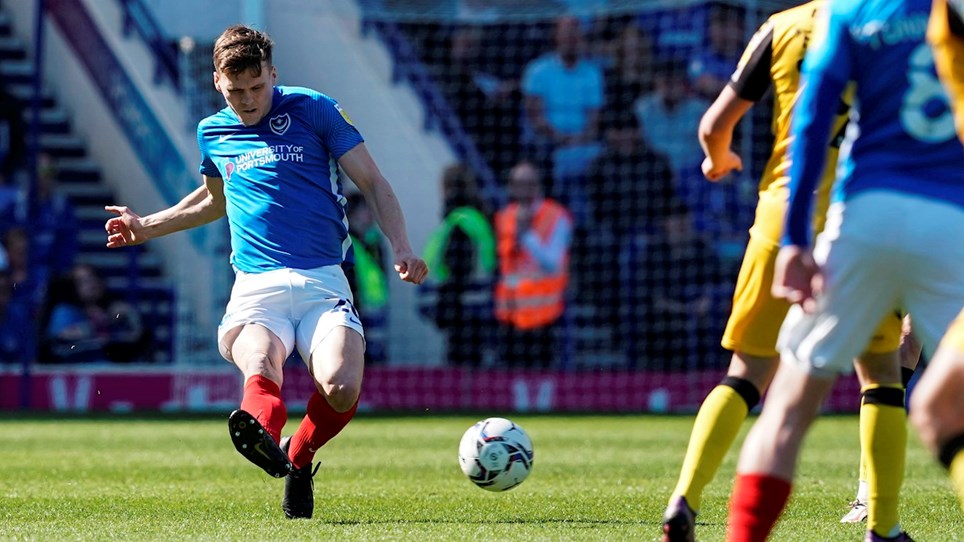 
Sean Raggett felt that Pompey could have collapsed after letting their two-goal lead slip against Lincoln. 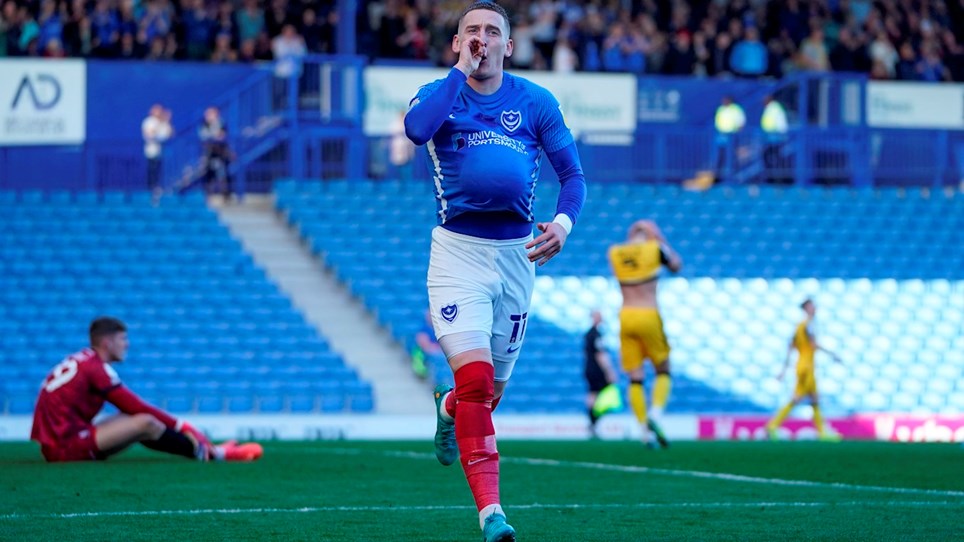 Ronan To The Rescue


It looked like Pompey had squandered the chance to enjoy a Good Friday victory over Lincoln at Fratton Park.

Ronan Curtis came off the bench to hit the winner in an eventful Good Friday contest with Lincoln at Fratton Park.

George Hirst opened the scoring from the penalty spot early in the first half and the hosts appeared to be cruising when Michael Jacobs curled home a fine free-kick.

But Ted Bishop immediately reduced the Imps’ deficit and Ben House then equalised with his first touch.

It was fellow substitute Curtis who had the final say, though, after ensuring he was in the right place to deal with a loose ball.

Danny Cowley made one change from the side that eased to victory over Rotherham earlier in the week.

Aiden O’Brien was restored to the starting line-up, with fellow Republic of Ireland international Curtis dropping to the bench.

There was a familiar face in Michael Appleton’s opposition team, with John Marquis involved after completing a January switch to the Imps.

It was the visitors who made the faster start in the warm south coast sunshine and Lewis Fiorini wasted a glorious chance in the opening seconds.

He received a cut-back from Liam Cullen in acres of space on the edge of the box, only to blaze over the bar.

The opening was lively and when O’Brien sent the ball into the mixer, Jacobs and Marcus Harness saw efforts blocked in quick succession.

A spell of pressure from Lincoln then resulted in an angled Marqus drive that was comfortably dealt with by Gavin Bazunu.

Pompey were soon dealt a blow when Joe Morrell went down injured for the second time in the space of a few minutes.

The midfielder was unable to continue after receiving treatment and limped off the pitch to be replaced by Ryan Tunnicliffe.

A nice bit of passing play from the Blues involving Sean Raggett and Jacobs almost provided an opening, but the angle was just too tight for O’Brien.

But the action soon begun to lull and the rest of the first half had a distinct ‘end of season’ flavour to it.

The Imps did try finish with a bit of a flourish and Fiorini tried to catch Bazunu off his line, with a shot that flew not too far over the bar.

Pompey might have hit a lull towards the end of the first half, but they certainly came charging out of the blocks following the restart.

There was a great chance to score after just a few seconds, but Hirst could not keep his header down from a fine Connor Ogilvie cross.

However, the Blues did break the deadlock on 50 minutes after Cullen was penalised for a clumsy challenge on Jacobs inside the box.

Referee Trevor Kettle pointed straight to the spot and although Jordan Wright went the right way, the penalty from HIRST went under his dive and into the net.

The hosts then went to cursing their failure to double the lead to being relieved they still had one in quick succession.

Louis Thompson did well to steal possession and leave O’Brien with just the keeper to beat, but Wright was equal to his powerful effort.

Lincoln broke straight down the other end and Fiorini sent Cullen racing through on goal, only for Bazunu to come to the rescue with a smart save.

The game began to slow again after the frantic period, but it was given a shot in the arm with two goals just a few minutes apart.

Pompey looked to have wrapped things up when JACOBS curled home a fine 25-yard free-kick that he had won himself.

But the Imps were soon back in the contest, as Bishop was given far too much time to bring the ball under control inside the area before slotting into the net.

Thompson then required treatment on the pitch and was brought off to be replaced by Shaun Williams.

The Blues looked to restore their two-goal advantage and Hirst turned a low Ogilvie centre narrowly past the post.

Cowley made his final switch on 76 minutes, with Curtis adding some fresh attacking energy in place of O’Brien.

Lincoln also made a change, bringing off Marquis for House, who promptly scored just a few seconds later.

The striker slid in to bundle the ball over the line after a Jamie Robson cross had been flicked on by Cullen.

But the Blues were soon back in front after patiently passing the ball around the Imps half in search of an opening.

Raggett eventually found one and surged forward before hitting a low shot that Wright could not keep hold of.

CURTIS picked the ball up and calmly took it past the prostrate keeper before slotting into an empty net.

Lincoln applied late pressure in search of another leveller and the display of eight additional minutes certainly gave them hope.

But the Blues managed to see out the closing stages without too much concern and Hirst might have settled any nerves, only to get the ball caught under his feet inside the area.

It mattered not, though, as they had already done enough to secure the win and continue their fine Fratton form.


Sean Raggett felt that Pompey could have collapsed after letting their two-goal lead slip against Lincoln.

Ronan To The Rescue


It looked like Pompey had squandered the chance to enjoy a Good Friday victory over Lincoln at Fratton Park. 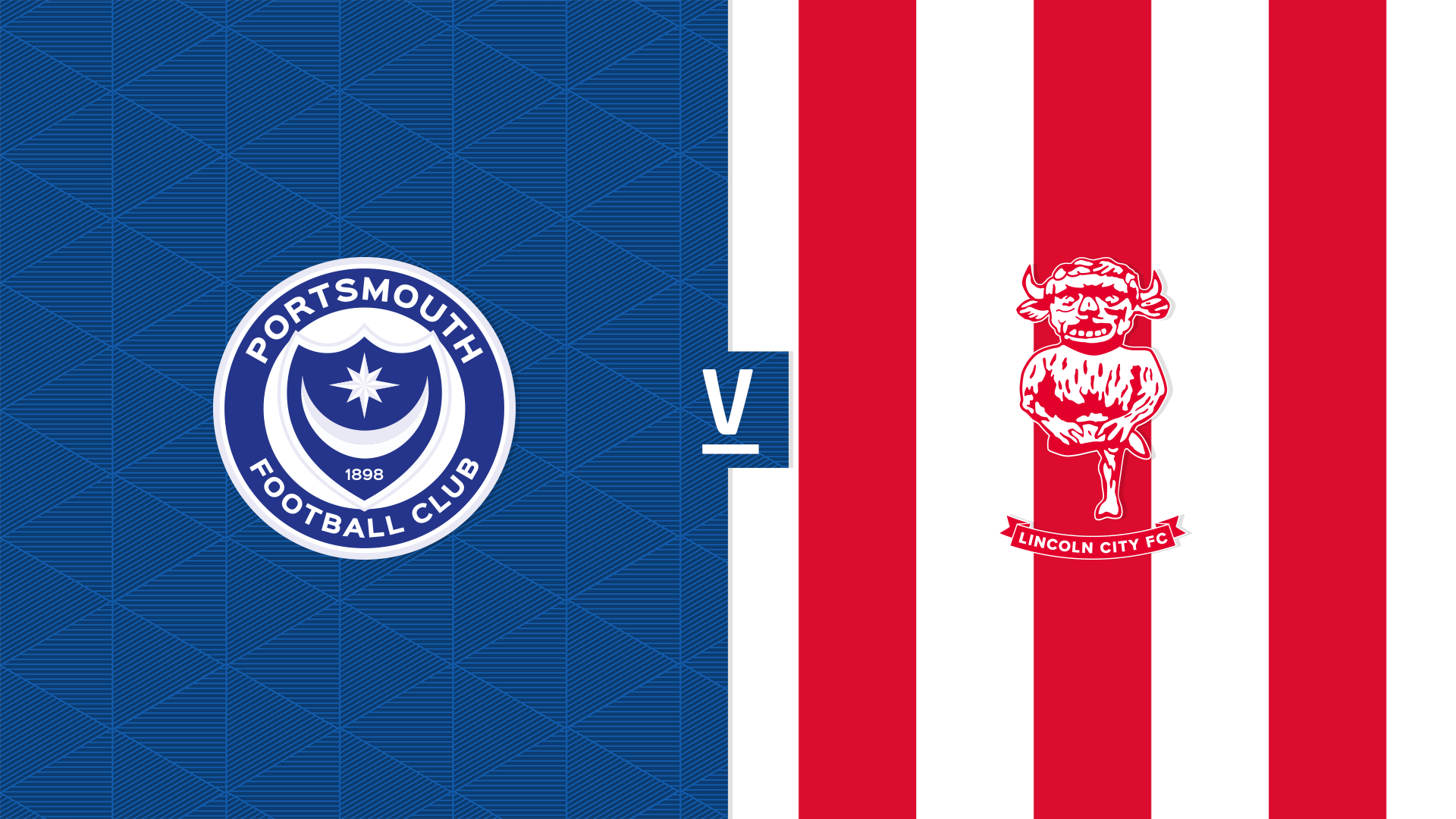 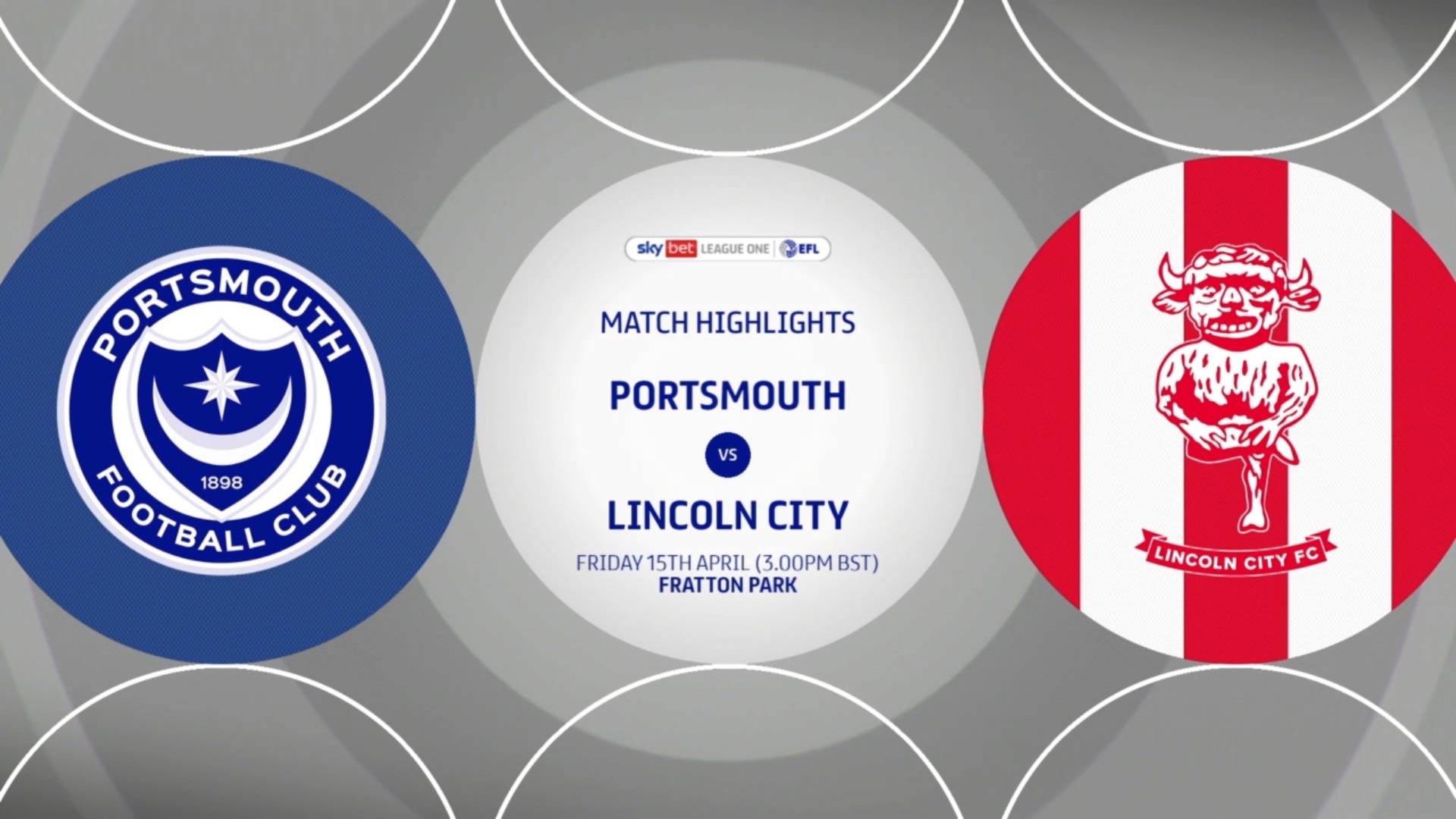 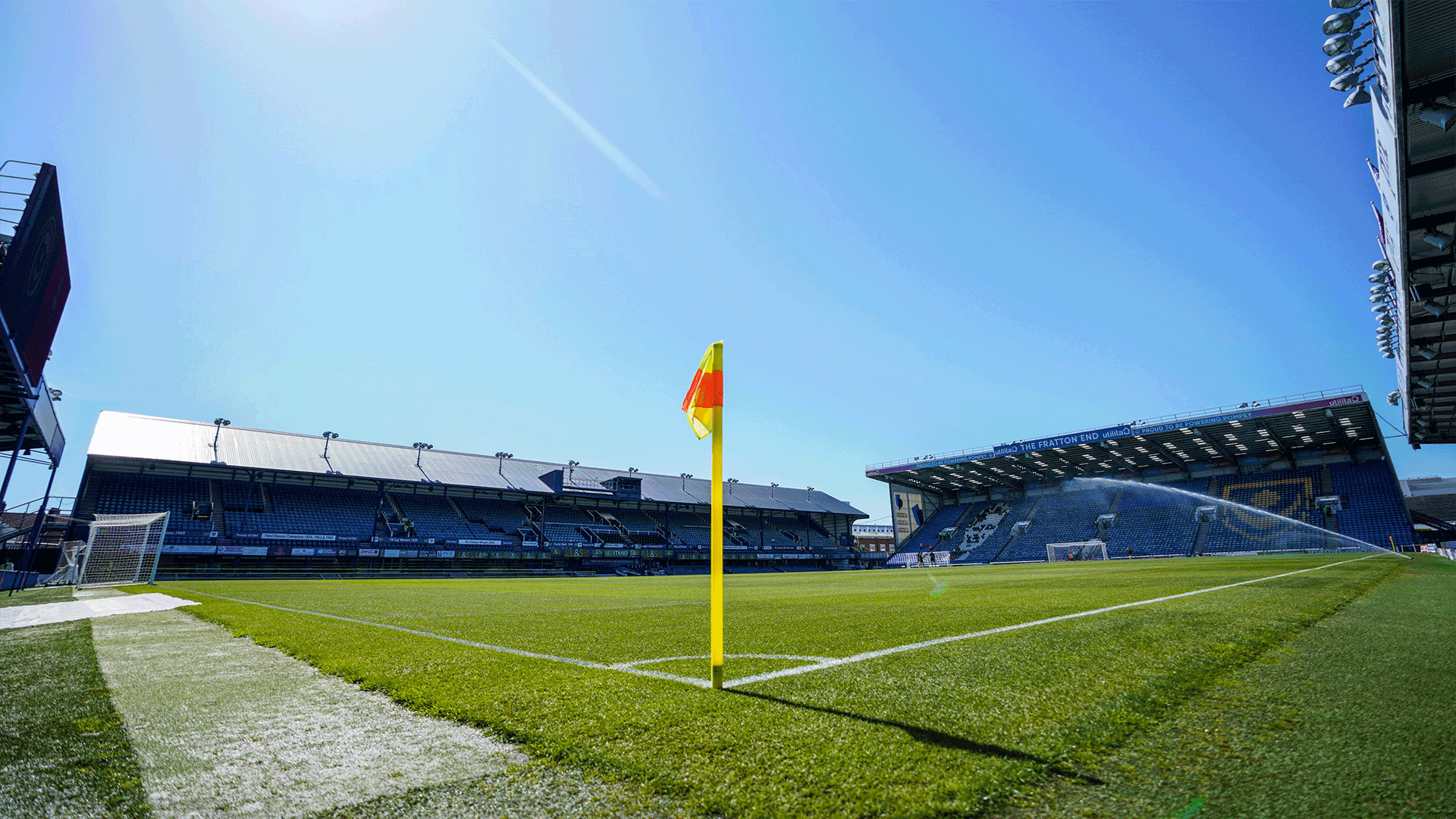