After 17 months of waiting, the time has almost come.

Pompey fans have had to wait a long time before being able to enter Fratton Park in significant numbers to watch their side in action.

But they will be able to cheer a Danny Cowley team in a competitive fixture on home soil for the first time on Saturday.

Crewe are the visitors for a League One contest, as life begins to return to something at least resembling normality.

While the Blues started the season with a narrow win at Fleetwood, their opponents drew 1-1 against newly promoted Cheltenham at Gresty Road.

They followed that with a narrow midweek Carabao Cup success at Hartlepool to set up a mouth-watering second round trip to top-flight Leeds.

David Artell’s troops finished 12th in the third tier last term, having come up from League Two during the previous – prematurely curtailed – campaign.

They will be without Charlie Kirk on Saturday after the highly-rated winger was snapped up by Charlton.

The most recent meeting between the sides finished goalless in Cheshire back in March, with John Marquis seeing a penalty saved.

But the Blues eased to a 4-1 victory at Fratton Park last season, courtesy of Ronan Curtis’ brace and goals for Tom Naylor and Marquis.

TEAM NEWS
Callum Johnson is suspended for three games after the appeal over his sending off at Millwall was rejected.

New signings Joe Morrell and Louis Thompson could make their debuts, although Danny Cowley has suggested that the latter might need some time to reach full match fitness.

The visitors will be without the suspended Billy Sass-Davies, while recent arrival Terell Thomas could be thrown straight into the side.

VIEW FROM THE DRESSING ROOM
Read the thoughts of Danny Cowley ahead of the game or watch the video below.

TICKETS
Fans are advised to buy tickets in advance online here and take advantage of the early bird rates, with prices rising on a matchday.

On the day of the game, tickets can be purchased from the Anson Road ticket office or Fratton End booth from 10am (no cash sales).

Season ticket holders are reminded that they will still need to purchase individual match tickets for the opening three home games.

MINUTE’S APPLAUSE
A minute’s applause will take place before kick-off, giving everyone inside Fratton Park a chance to pay tribute to all those supporters – as well as former players and managers – who have passed away over the past 17 months.

MATCH COVERAGE
Domestic iFollow subscribers can listen to live commentary from Andy Moon and Guy Whittingham by signing into their account and visiting the match centre from around 2.45pm on Saturday.

BETTING
Pompey are the 87/100 favourites with VBET to secure all three points, while the visitors can be backed at 16/5. 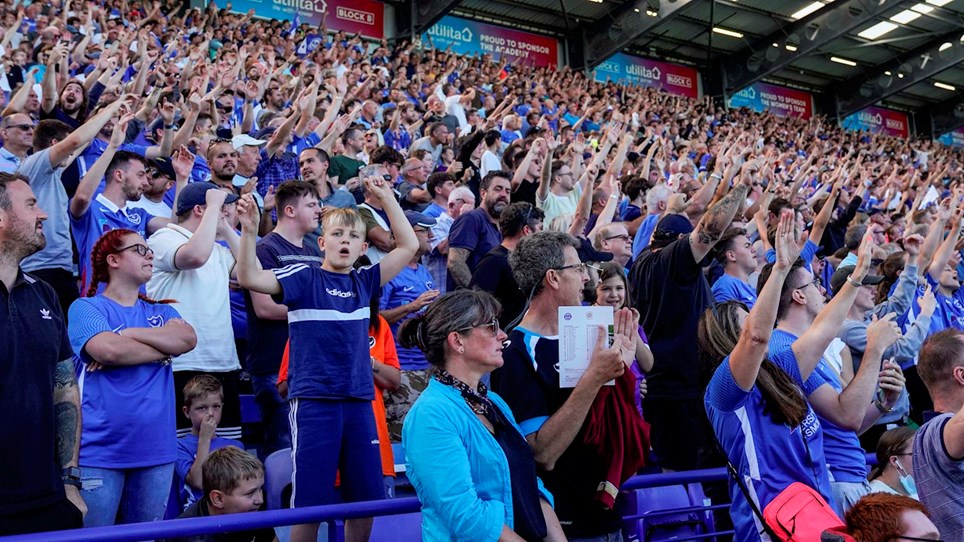 
Shaun Williams savoured his first experience of the famous Fratton atmosphere as a Pompey player. 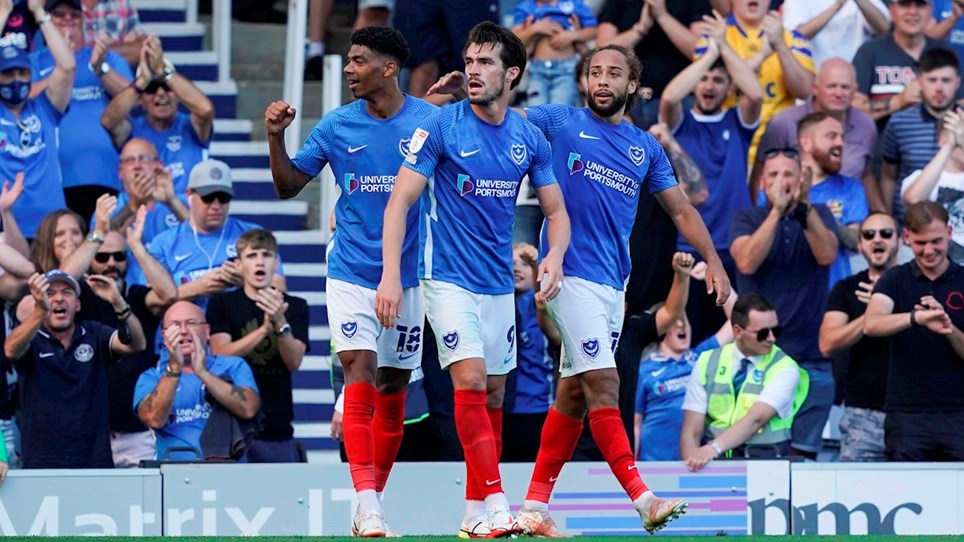 
Pompey made it two wins from two in League One with a deserved victory over Crewe at a noisy Fratton Park. 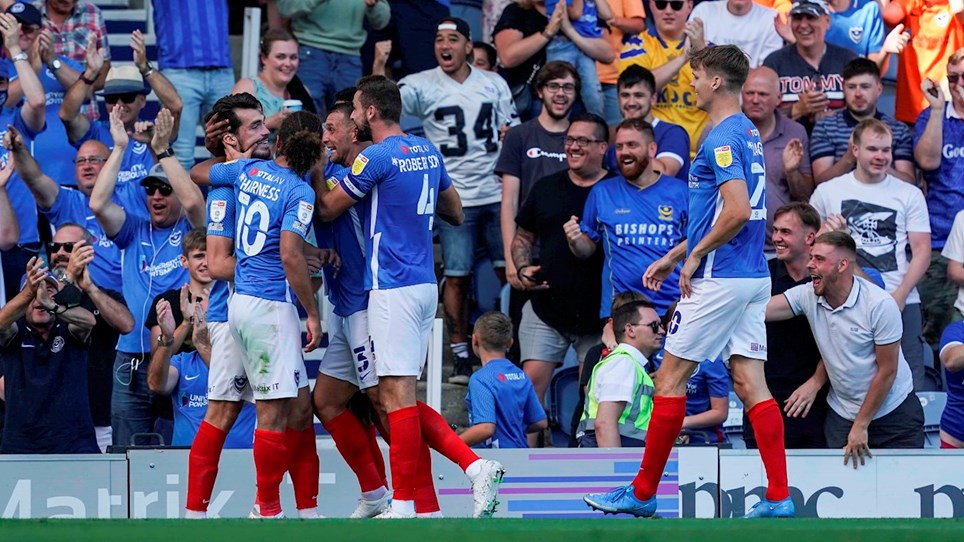 
Pompey welcomed fans back into Fratton Park for a competitive fixture with a dominant display over Crewe.

Harness: That's How We Want To Play

The long wait for fans to return to Fratton Park for a competitive fixture was certainly worth it, as Pompey eased to a 2-0 victory over Crewe.

They were in control for most of the contest on the sunny south coast, although had to remain patient against stubborn opposition.

But the result never looked in doubt once John Marquis had angled home an opener early in the second half.

And Marcus Harness then added the second goal the Blues’ dominance deserved to make sure there would be no way back for the Railwaymen.

Danny Cowley made four changes from the side that were narrowly beaten at Millwall in the Carabao Cup earlier in the week.

Gavin Bazunu was handed his debut between the sticks, while Kieron Freeman, Lee Brown and Harness all returned.

A minute’s applause was held before kick-off to remember all those Pompey fans – as well as former players and managers – who have passed away in the past 17 months since fans were allowed inside the ground in significant numbers.

Pompey controlled possession from the first whistle and set about trying to find a route through the opposition defence.

Ronan Curtis nodded over an early cross from Shaun Williams, then sent a long-range effort past the post.

And when Williams then sent a corner into the box, Clark Robertson appeared to have his shirt tugged, only for referee Will Finnie to wave away his appeals.

The deadlock was almost broken midway through the first half, when Brown cut the ball back for Harness.

But he was brilliantly denied by Will Jaaskelainen from point-blank range and Ryan Tunnicliffe then nodded over.

Crewe were not causing too many problems, although Mike Mandron’s header cleared the crossbar from a recycled corner.

And Pompey finished the half with a flourish, as Curtis’ clean strike had to be tipped over by Jaaskelainen.

A teasing stoppage-time cross from Harness was then agonisingly out of reach for both Marquis and Curtis.

A goal looked like it might be coming as the interval approached – and it finally arrived within three minutes of the restart.

Tunnicliffe drove forward with purpose before releasing MARQUIS, who angled in a shot that clipped the inside of the post and nestled in the net.

They seemed to have the initiative and set about trying to find another goal to give the Fratton faithful even more reason to cheer.

But the Blues were almost undone from a corner, with Freeman not able to clear and an almighty scramble ensuing before Callum Ainley eventually dragged a shot wide.

Normal service soon resumed, though, and when the hosts were gifted possession, Marquis collected a cross from Curtis and was not quite able to pick out Reeco Hackett-Fairchild.

The Fratton faithful through their side had gone further ahead on the hour mark after Brown had done well to win a corner.

Williams’ delivery was flicked on by Hackett-Fairchild for Marquis to turn home at the back post, but the flag was raised for offside.

However, a second goal did arrive on 64 minutes after Curtis had switched the ball across the field to Tunnicliffe.

He then found HARNESS and the winger managed to squeeze a shot past defender and keeper from a tight angle.

Cowley soon handed a debut to Joe Morrell in place of Williams, with both players afforded a standing ovation from the crowd.

Two more substitutions soon followed for the home side, as Hackett-Fairchild and Marquis made way for Michael Jacobs and George Hirst respectively.

Pompey remained on the attack as the seconds ticked down and Curtis’ cleanly struck effort from the edge of the box rose inches over the bar.

And they kept pushing for more goals right up until the final whistle, as an impressive start to the season continued.


Shaun Williams savoured his first experience of the famous Fratton atmosphere as a Pompey player.


Pompey made it two wins from two in League One with a deserved victory over Crewe at a noisy Fratton Park.


Pompey welcomed fans back into Fratton Park for a competitive fixture with a dominant display over Crewe.

Harness: That's How We Want To Play 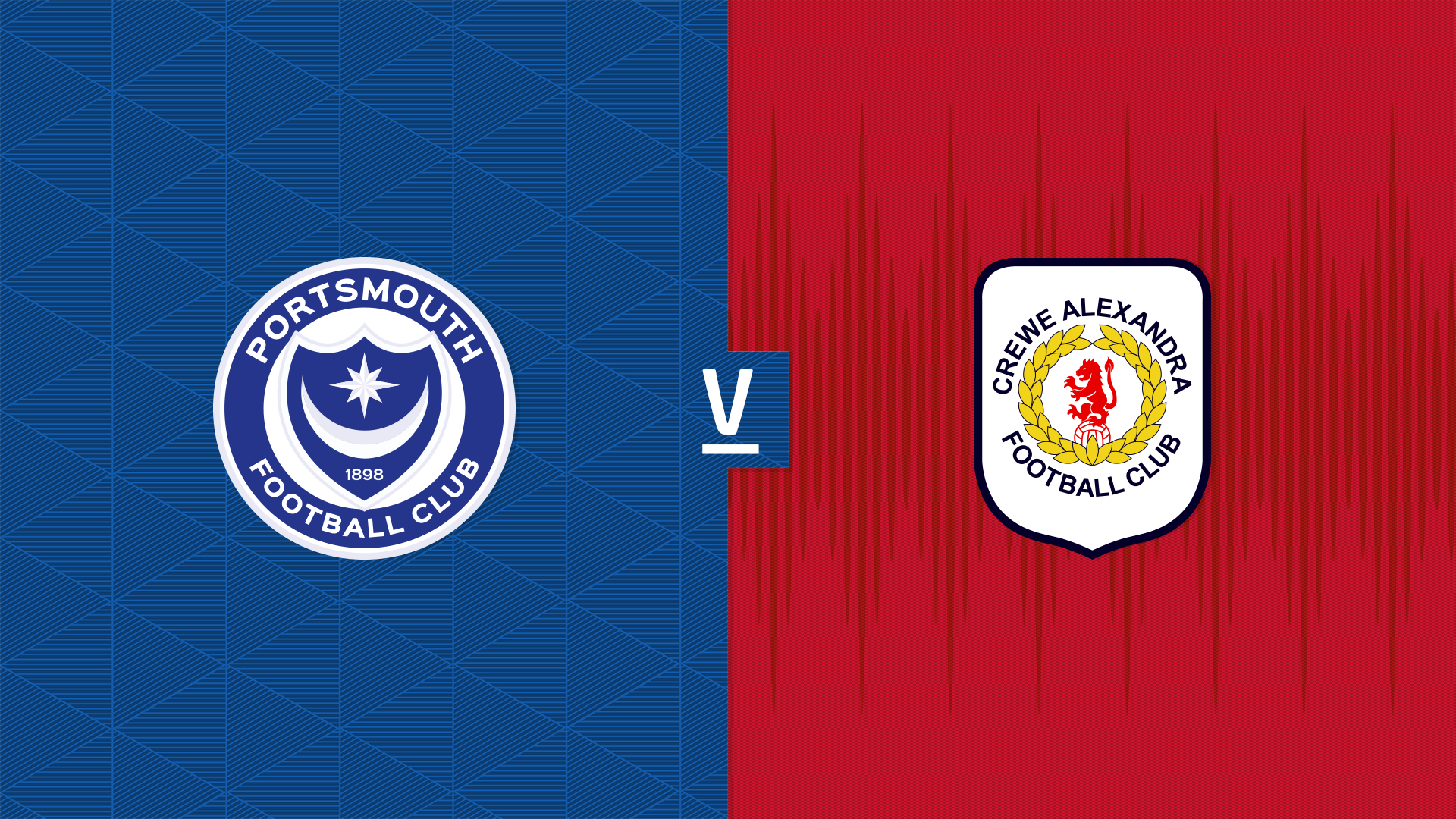 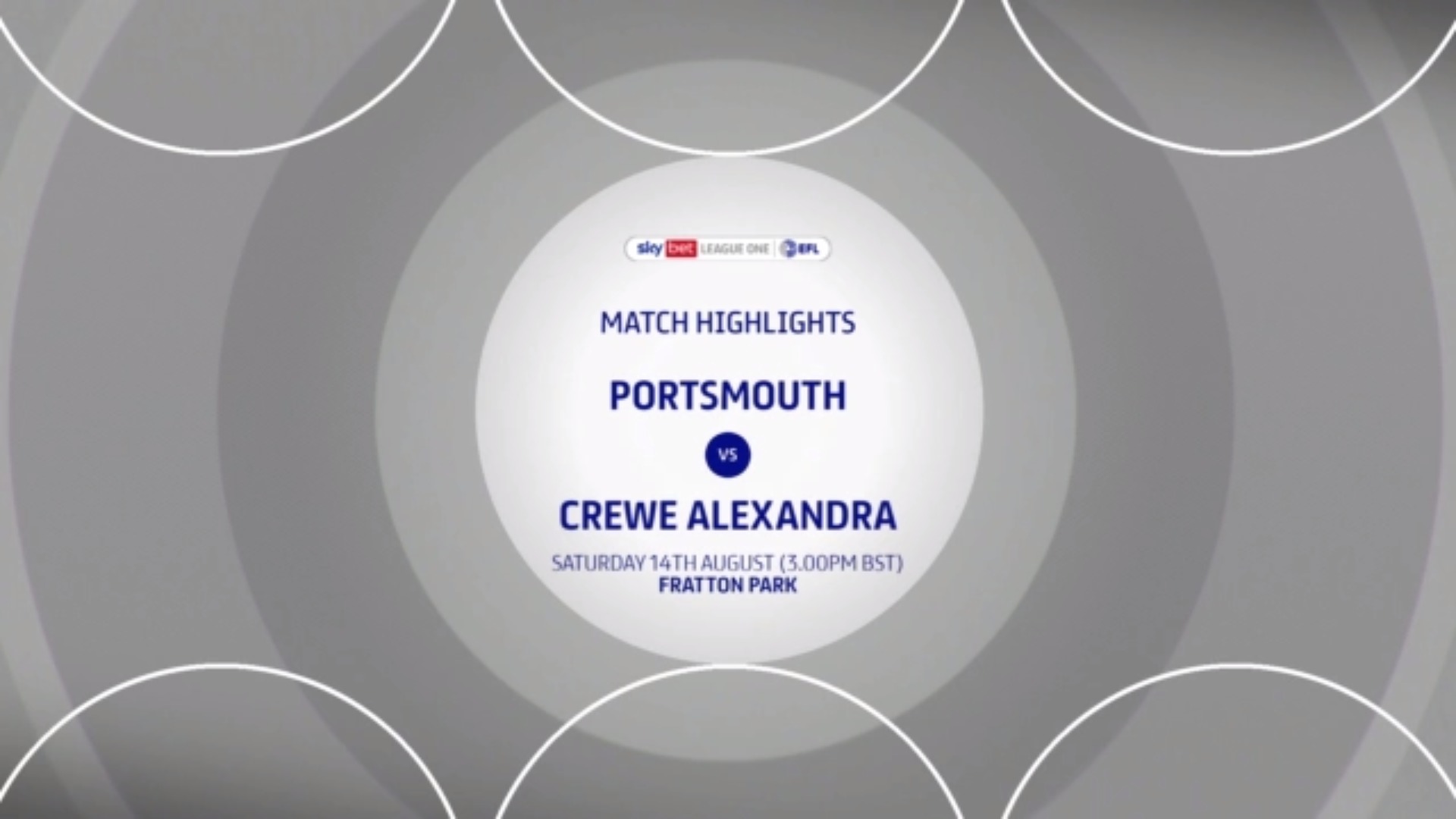 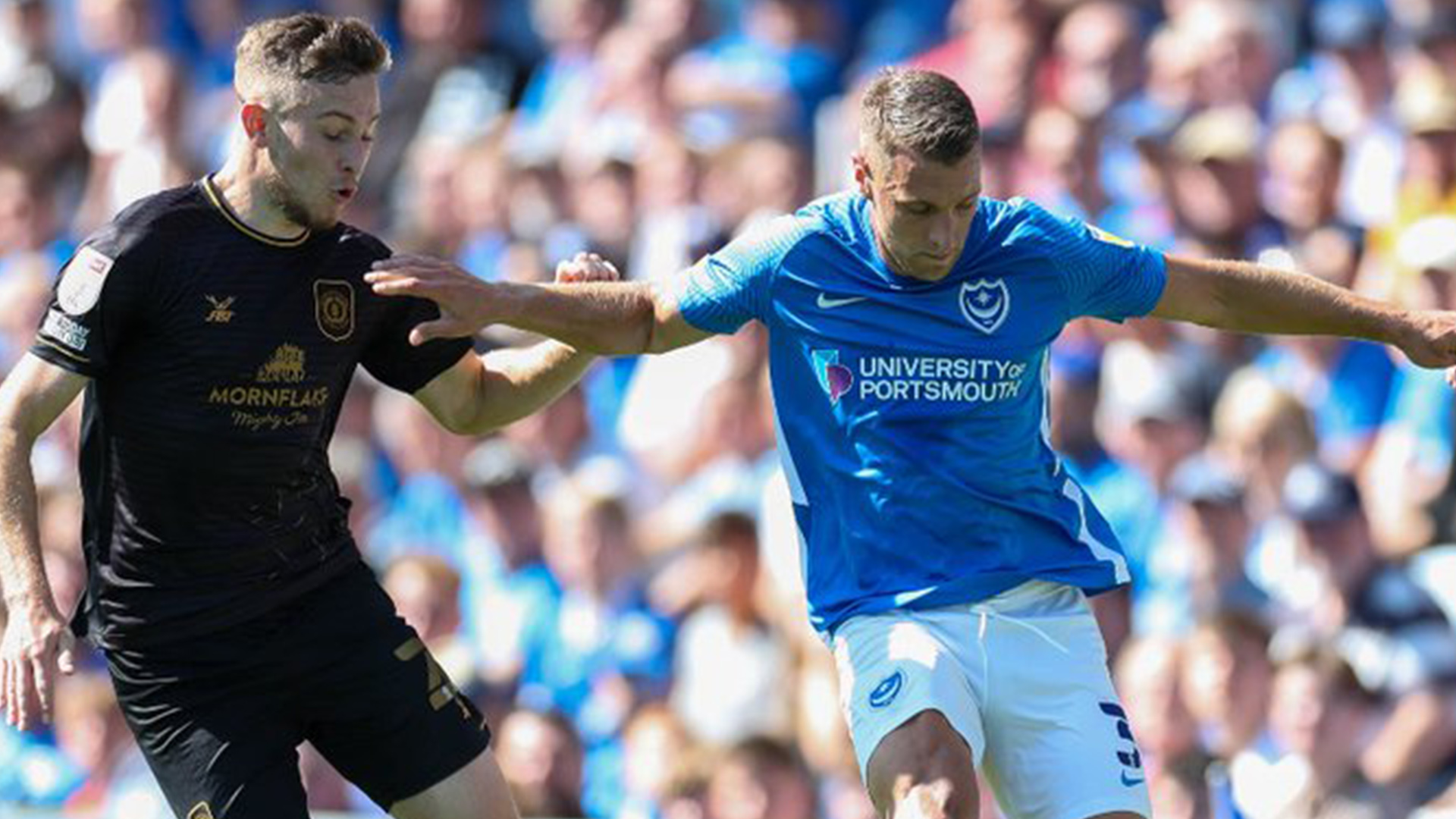