The likes of Chelsea, Liverpool and Manchester United lie tantalisingly in wait for the winners of Emirates FA Cup second round ties.

But before dreaming of a mouth-watering clash with Premier League opponents, there is a job to do this weekend.

Harrogate Town – who sit seventh in League Two – are the visitors to Fratton Park on Saturday (3pm kick-off).

It has been some rise for Simon Weaver’s side, who were competing in the sixth tier as recently as 2018.

But two promotions in the space of three seasons saw them reach the EFL for the very first time – and they certainly do not look out of place there.

They drew 1-1 at Swindon in their last outing, are still in the Papa John’s Trophy and reached this stage of the FA Cup by beating Wrexham last month.

There has only been one previous meeting between Pompey and Harrogate – and that took place in round one of the same competition two years ago.

The Yorkshire contest was delayed by almost an hour because of a power cut and when it did get started, the Blues fell behind before goals from Brandon Haunstrup and Ronan Curtis eventually secured progress.

TEAM NEWS
Sean Raggett is available again after serving a one-match ban, while Lee Brown and John Marquis have returned to full training after a spell on the sidelines.

The visitors will be without the defensive trio of Ryan Fallowfield (groin), Rory McArdle (groin) and Will Smith (hernia), as well as striker Aaron Martin (knee).

TICKETS
Pompey fans can secure a seat for the second round contest online here.

On the day of the game – when prices increase – they can also be purchased from the Anson Road ticket office or the booth behind the Fratton End.

MATCH COVERAGE
The match is not being screened live in the UK or overseas and cannot be watched on iFollow.

However, all iFollow subscribers can listen to live commentary from Andrew Moon and Guy Whittingham by signing into their account and visiting the match centre from around 2pm on Saturday.

BETTING
Pompey are the 52/100 favourites with VBET to reach the second round, while the visitors can be backed at 5/1. 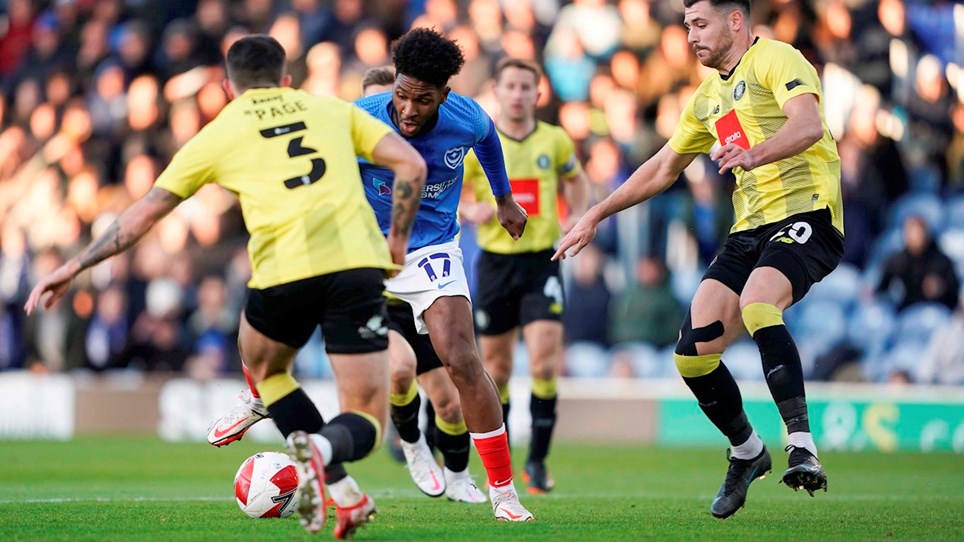 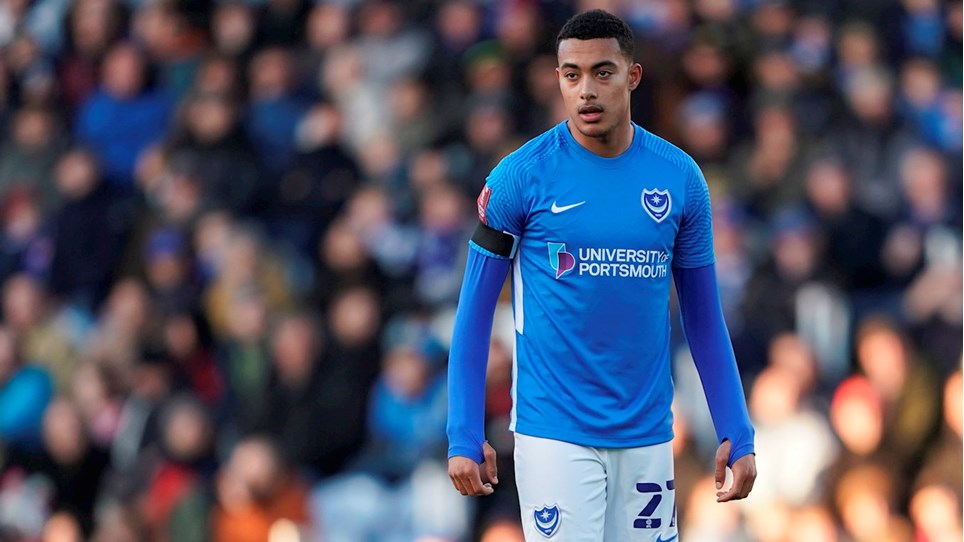 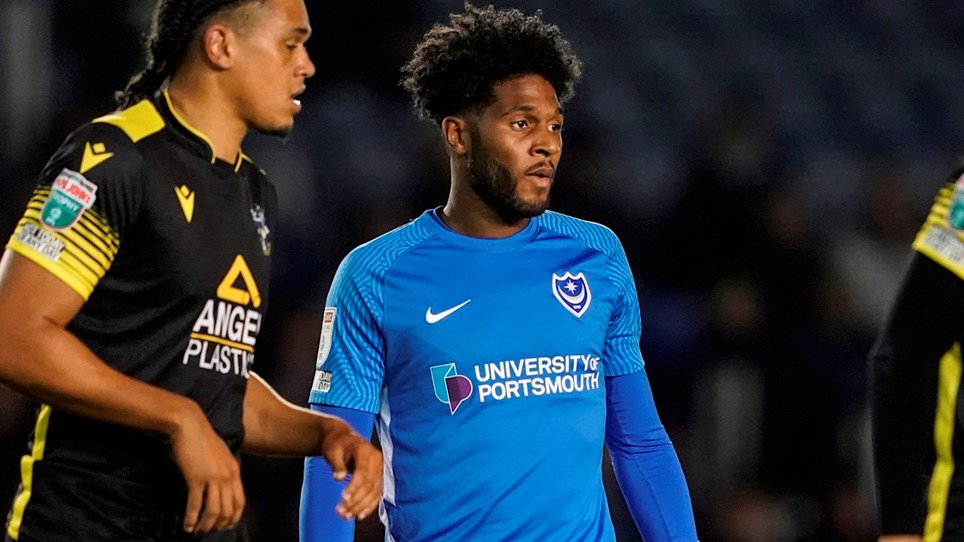 Pompey are out of the Emirates FA Cup after Harrogate Town grabbed a last-gasp winner in a second round contest at Fratton Park.

Jack Diamond slotted home in the final minute of stoppage-time to seal progress for the League Two side.

Luke Armstrong had earlier given them the lead just before the break, only for Ellis Harrison to immediately equalise.

Danny Cowley made four changes from the side that dramatically won at Gillingham in the league the previous week.

Michael Jacobs was rewarded for his late Priestfield winner with a start, while Harrison, Miguel Azeez and Sean Raggett also returned.

George Hirst and Joe Morrell both missed out with a non-Covid related illness, while there were four academy players among the nine substitutes.

There was a minute’s applause before kick-off in memory of promotion-winning manager Frank Burrows, who passed away recently at the age of 77.

An open first half saw both sides launch plenty of quick attacks, although there was not much to work either keeper.

Mark Oxley’s best moment between the Harrogate sticks came in the opening stages, as Marcus Harness forced a smart save after Jacobs’ run had been halted.

The forward had already nodded wide from a Mahlon Romeo cross, while a Shaun Williams corner just evaded the head of Raggett at the far post.

Pompey were passing the ball around nicely and one such passage of play ended with Romeo drilling the ball narrowly wide.

Harness also went close with an effort that was deflected behind, following some good work involving Harrison, Jacobs and Azeez.

And another precise corner from Williams then picked out Azeez, whose shot grazed the top of the net.

But Harrogate were causing problems of their own and it was not completely against the run of play when they took the lead just before the break.

A pass from Williams was intercepted and the ball worked to Armstrong, who neatly bent the ball around Gavin Bazunu’s grasp and into the net.

But the visitors’ lead lasted a matter of moment, as HARRISON was alert when a Jacobs run was halted and slotted into the net.

Raggett had to make a key block once the action restarted after Diamond beat Kieron Freeman in the centre of the pitch and charged towards goal.

There was a change of personnel and system just before the hour mark, with Freeman making way for Lee Brown and the Blues utilising a back four.

Harrison soon had a chance to score when he met a deep Williams free-kick, but could only guide his header into Oxley’s arms.

That was the striker’s final piece of action, though, as he was immediately replaced up front by Curtis.

Pompey were almost made to pay for some slack defending on 69 minutes, as Lloyd Kerry was allowed time to pick up a loose ball before seeing his shot deflected behind off Connor Ogilvie.

Cowley’s final throw of the dice was an attacking one, as Hackett was brought off for a fit-again John Marquis.

But it was Harrogate who almost scored seconds later, as Armstrong diverted a George Thomson effort inches past the post.

Referee Simon Mather was not endearing himself to the Fratton faithful with a couple of strange decisions, including showing a yellow card to Ogilvie for a clean tackle.

The Blues tried to apply plenty of pressure as the contest entered its closing stages and committed men forward.

But they were almost caught out on the break, with Armstrong’s effort blocked by Brown and Alex Pattison hitting the loose ball wastefully wide.

Raggett then got a foot to Diamond’s shot, affording Bazunu a simple save as Harrogate again countered quickly.

It looked as though the sides would be heading to Wetherby Road for a replay, only for Lewis Page to square the ball for a stretching Diamond to convert right at the death.

The result saw Pompey's nine-match unbeaten run come to an end, while Harrogate can look forward to a spot in the third round for the first time.