Pompey took plenty of credit – if no points – from their trip to Oxford at the weekend.

Now the challenge is to register a first League One victory of 2022 when Burton visit Fratton Park this evening (7.45pm kick-off).

Jimmy Floyd Hasselbaink’s side are one place higher in 12th spot, with a Blues win enough to leapfrog their opponents.

The Brewers have won their past two games on the road at Gillingham and Lincoln, although that does represent 50 per cent of their total away successes.

And they were beaten 2-0 on home soil by Sheffield Wednesday on Saturday, with former Fratton loanee George Byers among the scorers.

Among their January arrivals was striker Gassan Ahadme, who was recalled from Pompey by Norwich so he could make a permanent switch to the Pirelli Stadium.

It was Albion who came out on top when the sides met in Staffordshire earlier in the season, with Reeco Hackett’s free-kick proving no more than a consolation.

They won by the same scoreline at Fratton Park last term and the Blues have yet to taste success in any of their five south coast clashes with Burton.

TEAM NEWS
Pompey are waiting to learn the outcome of an appeal over Joe Morrell’s harsh red card at the Kassam Stadium.

Kieron Freeman (concussion) and Shaun Williams (back) have joined Jay Mingi (shoulder), Jayden Reid (knee) and Liam Vincent (shin) on the sidelines, while Mahlon Romeo (ankle) is a doubt.

The visitors are without Ryan Leak (face), while John Brayford, Sam Hughes and Dei Oshlilaja are all carrying knocks.

TICKETS
Pompey fans can secure a seat for tonight's contest online here or by visiting the Anson Road ticket office.

Supporters coming to the ground this evening can also purchase tickets from the booth behind the Fratton End.

A matchday magazine is available to purchase from sellers around the ground, online from the memorabilia store, in the club shop, the Victory Bar and selected kiosks.

The Victory Bar will be open for home fans from 5pm.

BETTING
Pompey are the 87/100 favourites with VBET to secure all three points, while the visitors can be backed at 29/10.


Pompey saw off Burton at Fratton Park to register their first League One victory of 2022. 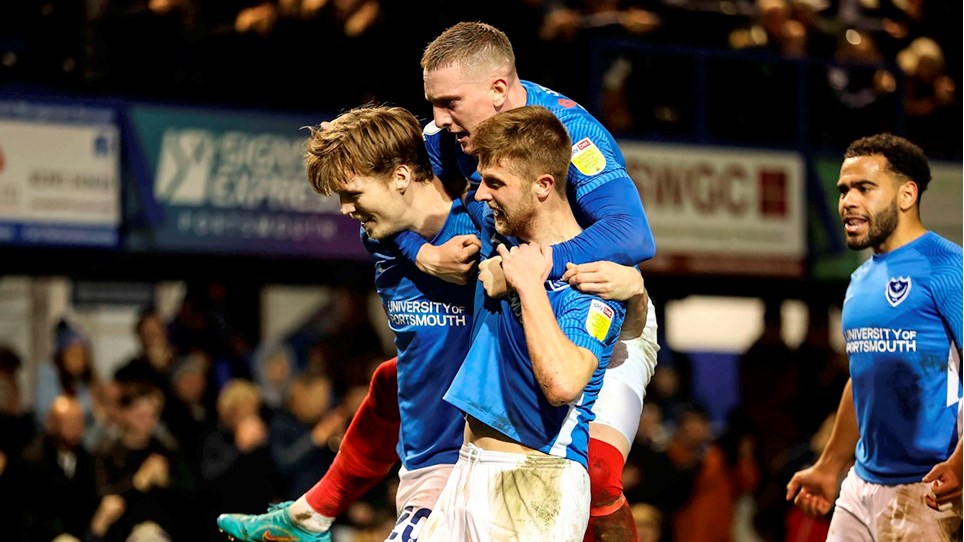 
Pompey found a return to winning ways by seeing off Burton at Fratton Park. 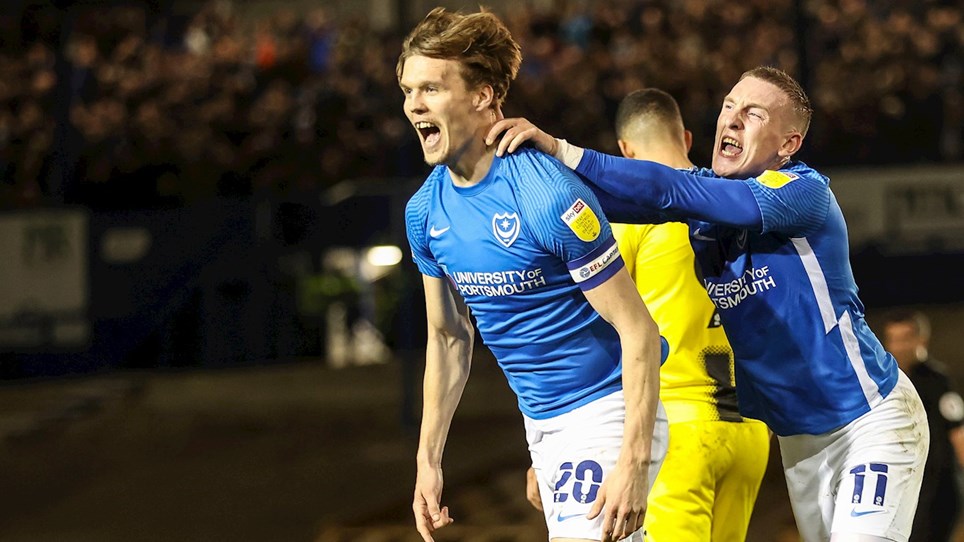 Raggett: We Dug In


Sean Raggett was delighted that Pompey were rewarded for their efforts against Burton. Cowley: We Found The Answers


The relief was palpable around Fratton Park when referee Craig Hicks blew the final whistle.

Pompey finally registered their first League One victory of 2022 by seeing off stubborn Burton at Fratton Park.

It was a deserved outcome, although the hosts probably should have made life easier for themselves following a dominant first half display.

Sean Raggett headed them in front and Michael Jacobs continued his fine individual form by doubling the leas before the break.

But former Fratton loanee Gassan Ahadme reduced Albion’s deficit shortly after the restart, meaning the rest of the contest was nervier than it might have been.

Danny Cowley made two enforced changes from the side that were cruelly beaten at Oxford at the weekend.

Joe Morrell saw his appeal for a harsh sending off dismissed, so began a three-match ban and made way for Tyler Walker.

The other switch was like-for-like, as Mahlon Romeo recovered from an ankle injury to replace Kieron Freeman, who was suffering from concussion.

Pompey came tearing out of the blocks and there were just 35 seconds on the clock when they had a chance to opening scoring.

Hayden Carter got free and found Ronan Curtis, who escaped one challenge before seeing his effort deflected wide.

Jacobs then found space to get forward and hit a low shot that was parried clear by Ben Garratt, with William Kokolo mopping up the loose ball.

The resulting corner was sent into the mixer by Jacobs, but Connor Ogilvie could only get a glancing touch.

There was a drop in pace after that flurry of activity, with the match turning into a slightly cagey affair.

But the Blues started to get back on top and a lovely ball from George Hirst started an attack, but he could only head over when the cross came in from Jacobs.

The pair combined again moments later, swapping passes in the area before the Leicester loanee’s shot was deflected behind.

And it was from the resulting corner that the deadlock was broken, as RAGGETT rose highest to head home Jacobs’ delivery.

It came as no surprise to see that man JACOBS double the lead before the break, catching Joe Powell dithering and nipping in to slot the ball past Garratt.

Burton did have an opportunity to reduce their deficit before the whistle blew, with Gavin Bazunu having to get down to deal with Ciaran Gilligan’s strike.

The hosts looked to keep attacking once the action restarted, only for their opponents to find a lifeline.

Mahlon Romeo and Carter got in each other’s way as the ball ran across the box and Terry Taylor’s angled effort was turned home by Gassan.

Powell then tried to sneak a free-kick inside Bazunu’s near post, but was unable to keep his effort down.

Pompey were struggling to replicate the attacking fluency on display at times before the break, although a Jacobs corner caused problems in Brewers box before eventually being hacked clear.

And they came close to restoring their two-goal lead on 67 minutes after Louis Thompson’s persistence had found Jacobs in space.

His low centre was only cleared as far as Curtis, whose shot was turned over the bar by the leg of Garratt.

The keeper then came off his line to deny Walker a first Blues goal after the ball had been flicked on by Hirst.

But Burton had a chance of their own moments later, with Ogilvie having to time his tackle to perfection to dispossess Harry Chapman inside the box.

Cowley then decided to add some fresh legs in the midfield engine room, as Thompson made way for Ryan Tunnicliffe.

And a second substitution followed soon after, with Denver Hume replaced on the left by Reeco Hackett.

There were comical scenes when a decision went against the visitors, leading to their manager Jimmy Floyd Hasselbaink throwing his papers in the air and jumping up in frustration.

He was shown a yellow card for his outburst by referee Craig Hicks, while Clark Robertson came on for Jacobs during the pause in play.

And the Blues then saw out the closing stages with relative ease to climb above their opponents in the League One standings.


Pompey saw off Burton at Fratton Park to register their first League One victory of 2022.


Pompey found a return to winning ways by seeing off Burton at Fratton Park.

Raggett: We Dug In


Sean Raggett was delighted that Pompey were rewarded for their efforts against Burton.

Cowley: We Found The Answers


The relief was palpable around Fratton Park when referee Craig Hicks blew the final whistle. 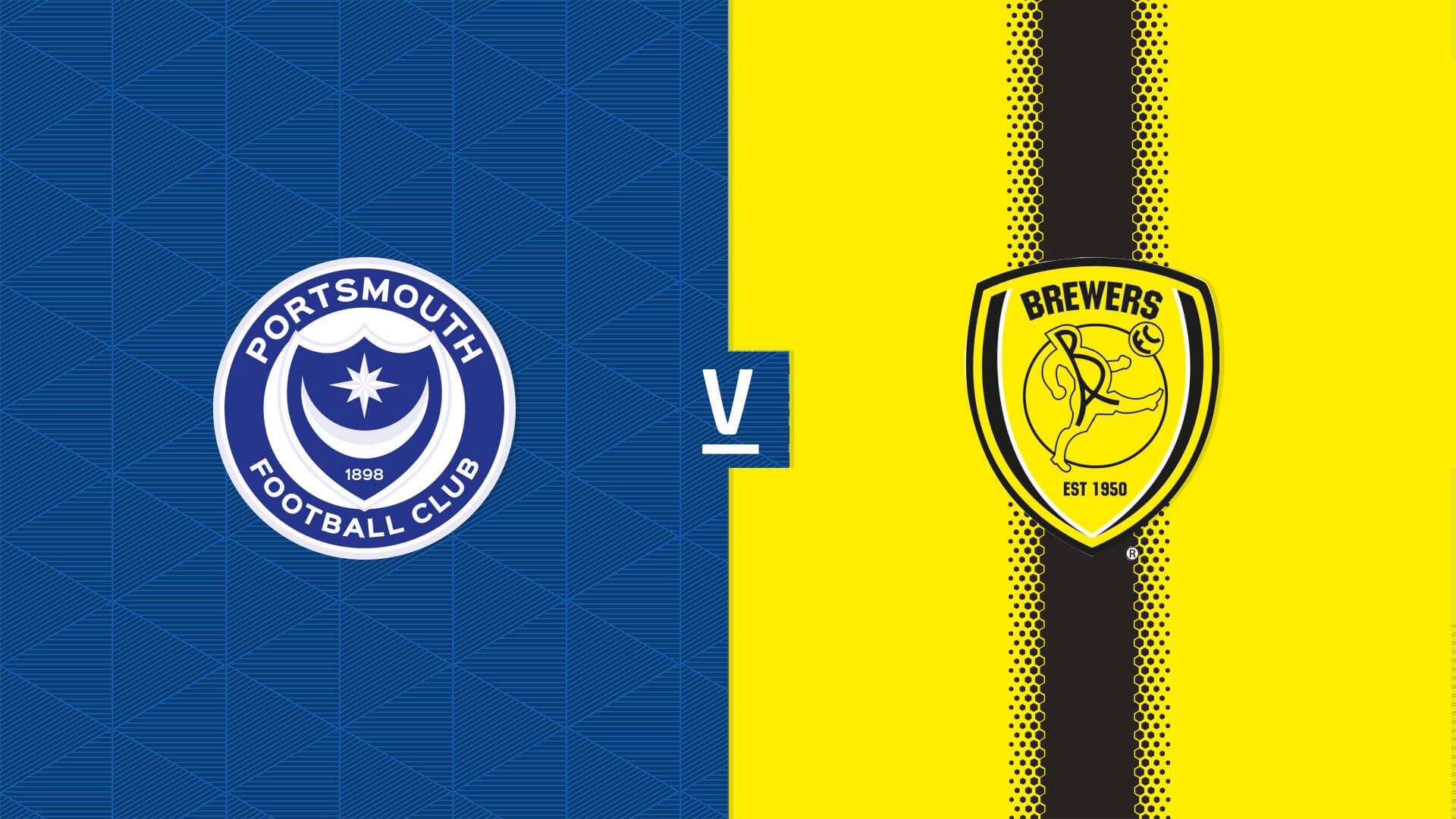 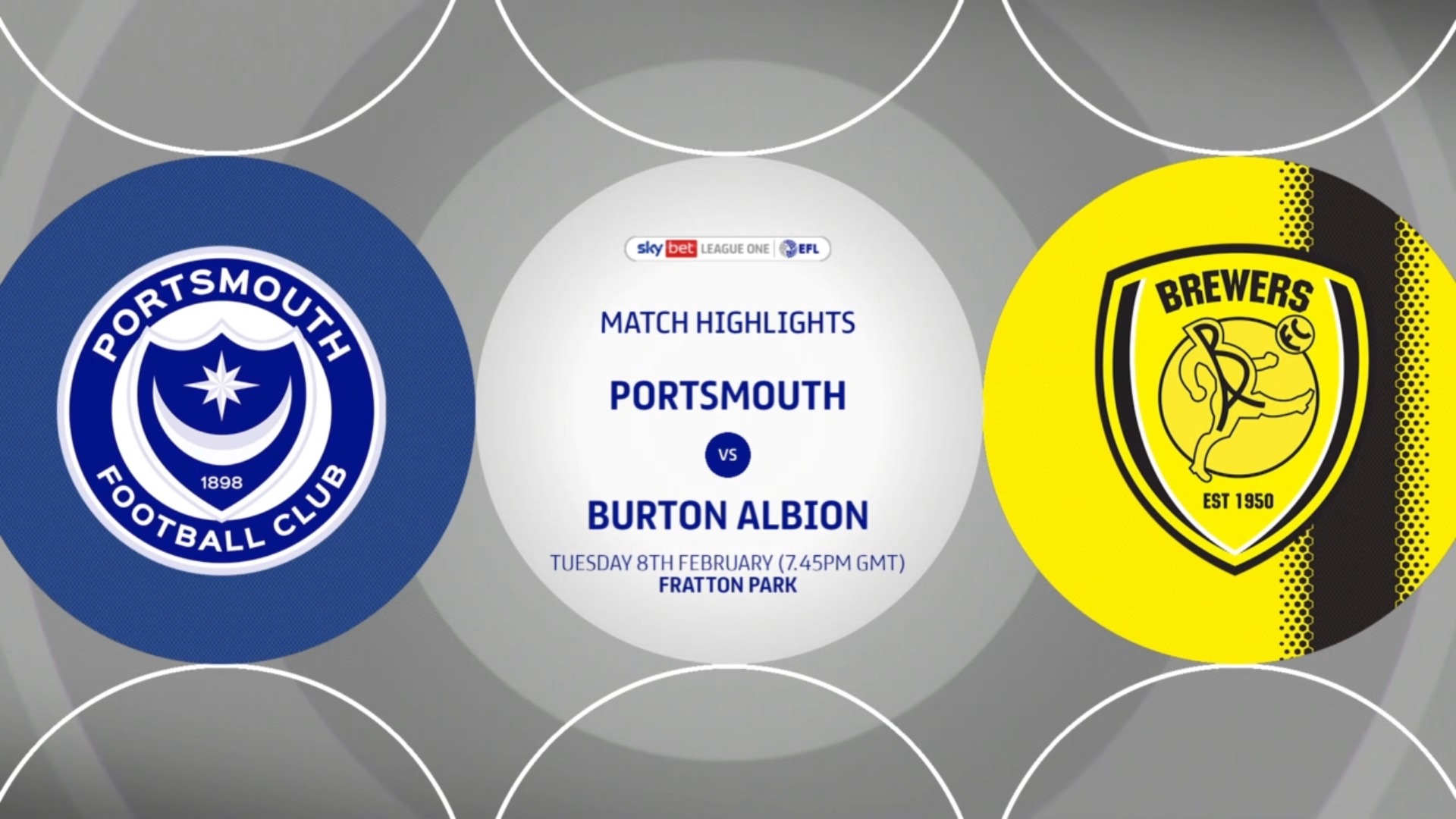 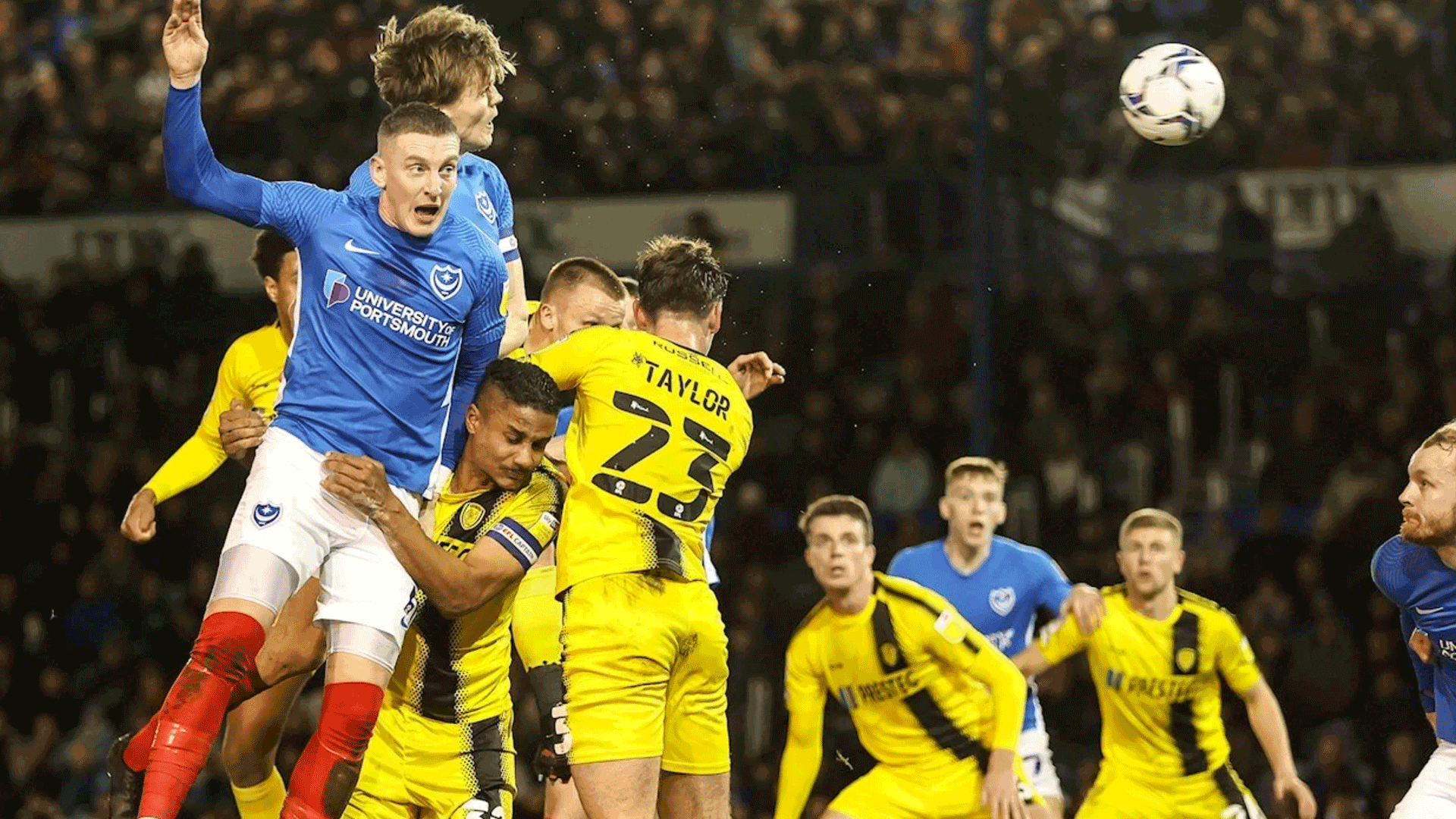