Pompey saw their eight-match unbeaten run come to an end with a narrow defeat at Plymouth earlier in the week.

So they will be keen to get their play-off quest back on track when Wycombe visit the south coast on Saturday (3pm kick-off).

The Chairboys are also battling it out for a place in the end of season lottery, currently sitting a single point behind sixth-placed Sunderland.

Jason McCarthy’s strike deep into stoppage-time earned them a valuable victory against Fleetwood on home soil on Tuesday night.

It means that Gareth Ainsworth’s men have not lost any of their past four fixtures – a sequence that includes three successes and a draw with summit sitters Rotherham.

They are searching for an instant return to the Championship after suffering relegation on the final day of last season.

A depleted Pompey side emerged 1-0 winners when the sides met at Adams Park back on November.

Marcus Harness bundled home the only goal in the second half after Alex Bass had kept out a Joe Jacobson penalty.

The most recent Fratton Park contest took place on Boxing Day on 2019, as Ben Close and Ronan Curtis found the target to provide some festive cheer for the Blues.

TEAM NEWS
Pompey will welcome Marcus Harness back to the squad after the forward completed a three-match suspension.

VIEW FROM THE DRESSING ROOM
Read the thoughts of Danny Cowley and Ryan Tunnicliffe ahead of the game.

TICKETS
All available tickets have sold out for Saturday’s game and no more will be made available.

A matchday magazine will be available to purchase from sellers around the ground, online from the memorabilia store, in the club shop, the Victory Bar and selected kiosks.

The Victory Bar will be open for Pompey fans from midday on Saturday.

BETTING
Pompey are the 6/5 favourites with VBET to secure all three points, while the visitors can be backed at 19/10. 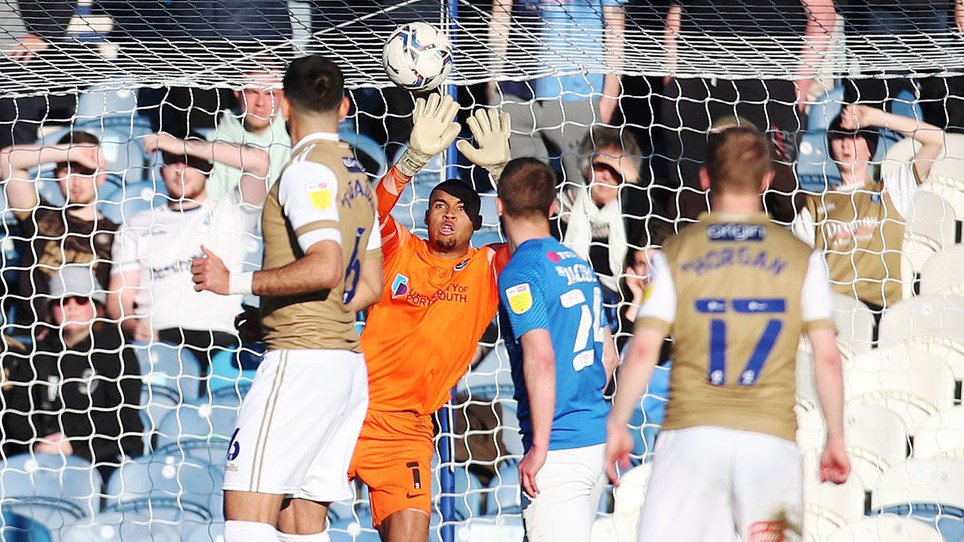 
Pompey were unable to close the gap on the top six after being held to a draw by Wycombe. 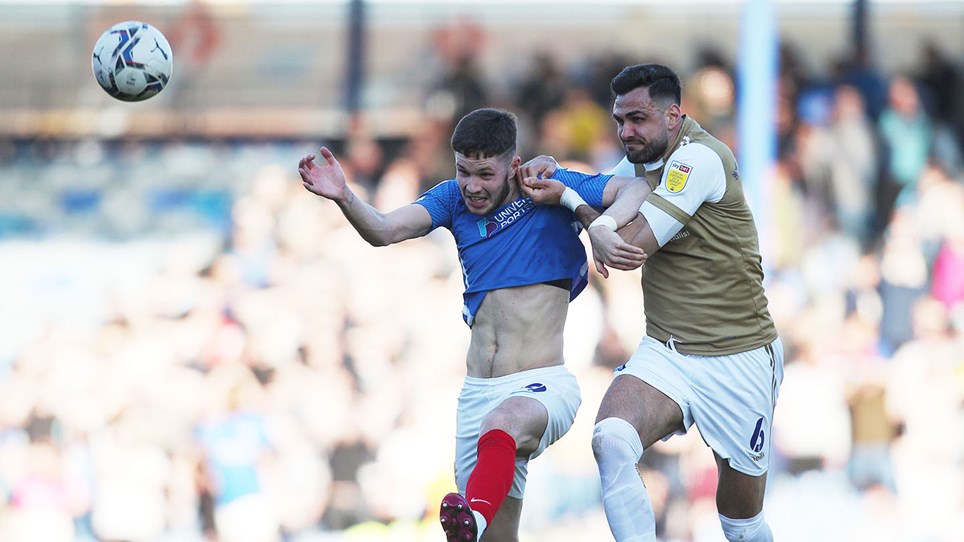 
Pompey were unable to close the gap on the play-off places after being held to a draw by Wycombe.


Pompey were looking to close the gap on the League One play-off spots when they hosted Wycombe. Cowley: We Were Flat


Pompey’s past three matches have come against sides above them in the League One table and just one goal has been conceded.

Pompey were left frustrated by fellow play-off hopefuls Wycombe in a goalless contest at Fratton Park.

The home side struggled to create many clear-cut openings and were often met by a brick wall when they entered the final third.

It might have been even worse for the Blues, with Gavin Bazunu making some smart saves to ensure they at least picked up a point.

Danny Cowley made four changes from the side that were narrowly beaten at Plymouth earlier in the week.

Marcus Harness made an instant return after completing his three-match ban, while there were also starts for Tyler Walker, Ryan Tunnicliffe and skipper Clark Robertson.

Ronan Curtis, Aiden O’Brien, Joe Morrell and Denver Hume dropped to the bench, where they were joined by a fit-again Michael Jacobs.

The sun was shining down on the south coast, but there was little brighten the mood of those inside the ground in a slow start.

There was nothing to trouble either keeper in the opening stages, with the game not able to spring into life.

An effort from Garath McCleary flew high into the Fratton End, while Harness could not cut the ball into the centre at the other end after bursting inside from the left.

The Chairboys might have threatened with a series of corners, but none of them caused any damage to the hosts.

Joe Jacobson tried to chest a Connor Ogilvie cross back to David Stockdale midway through the first half and the ball only just reached the keeper before Walker could get there.

Pompey’s most threatening moment came shortly after, as Jacobson made an acrobatic clearance to stop Robertson getting on the end of Hayden Carter’s delivery.

Wycombe went even closer on 33 minutes, with Anis Mehmeti collecting a fine threaded pass from Daryl Horgan, only for Bazunu to make an excellent save with his leg.

But that was about it for clear-cut openings as the action plodded along before the half-time whistle blew.

The action did not liven up considerably once the game restarted, with Ryan Tafazolli nodding a Jacobson corner over.

A flag-kick for the home side then saw Jason McCarthy do enough to put off Sean Raggett from a Harness delivery.

Cowley decided the time was right for a double switch just before the hour mark, with Louis Thompson and Walker replaced by Morrell and Jacobs.

The introduction of the latter player in particular was greeted with warm applause from the Fratton faithful following a month out with a knee injury.

But it was Wycombe who threatened next, as Vokes raced onto a precise pass from McCleary.

Bazunu did brilliantly to deny the striker, however, forcing him out wide before saving the Welsh international’s angled effort.

There were then boos ringing out around Fratton Park when Tafazolli had his hands all over George Hirst as the striker tried to race onto a long Ogilvie pass.

Referee Benjamin Speedie incredibly waved play on, however, and – to rub salt into the wound – booked both Cowley brothers for their protests.

The visitors came close to taking the lead after Raggett had been booked for a foul on Vokes on the edge of the box.

It was Lewis Wing who stepped up to take the free-kick, which had to be pushed behind by a diving Bazunu.

Cowley made his final throw of the dice to add some fresh attacking impetus, with Curtis on to replace Harness.

And he had a chance to put the hosts ahead late on, angling a shot into the side netting following good work from fellow substitute Jacobs.

But that was as close as Pompey came to snatching a win, with the closing stages a mostly incident-free affair.


Pompey were unable to close the gap on the top six after being held to a draw by Wycombe.


Pompey were unable to close the gap on the play-off places after being held to a draw by Wycombe.


Pompey were looking to close the gap on the League One play-off spots when they hosted Wycombe.

Cowley: We Were Flat


Pompey’s past three matches have come against sides above them in the League One table and just one goal has been conceded. 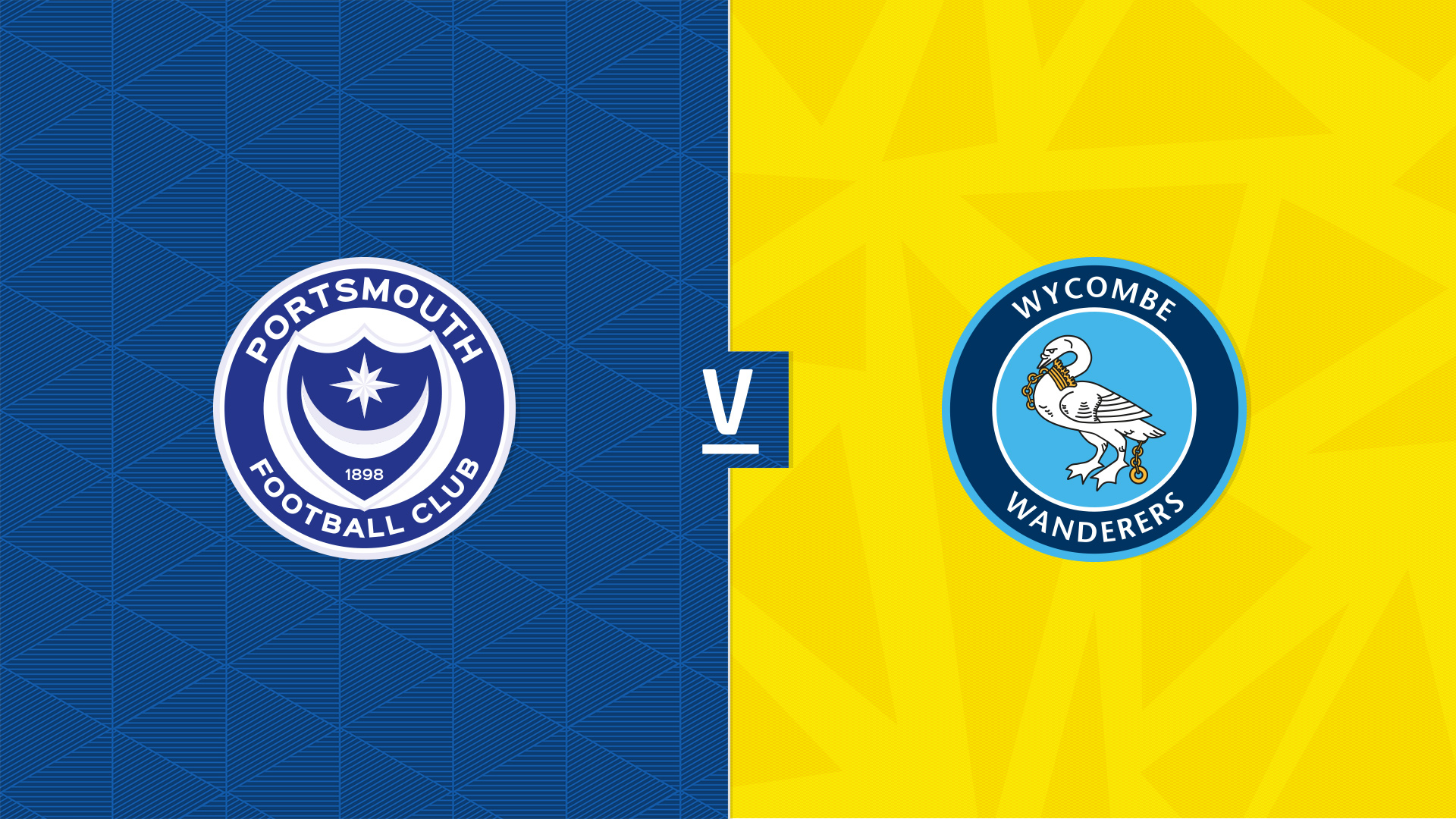 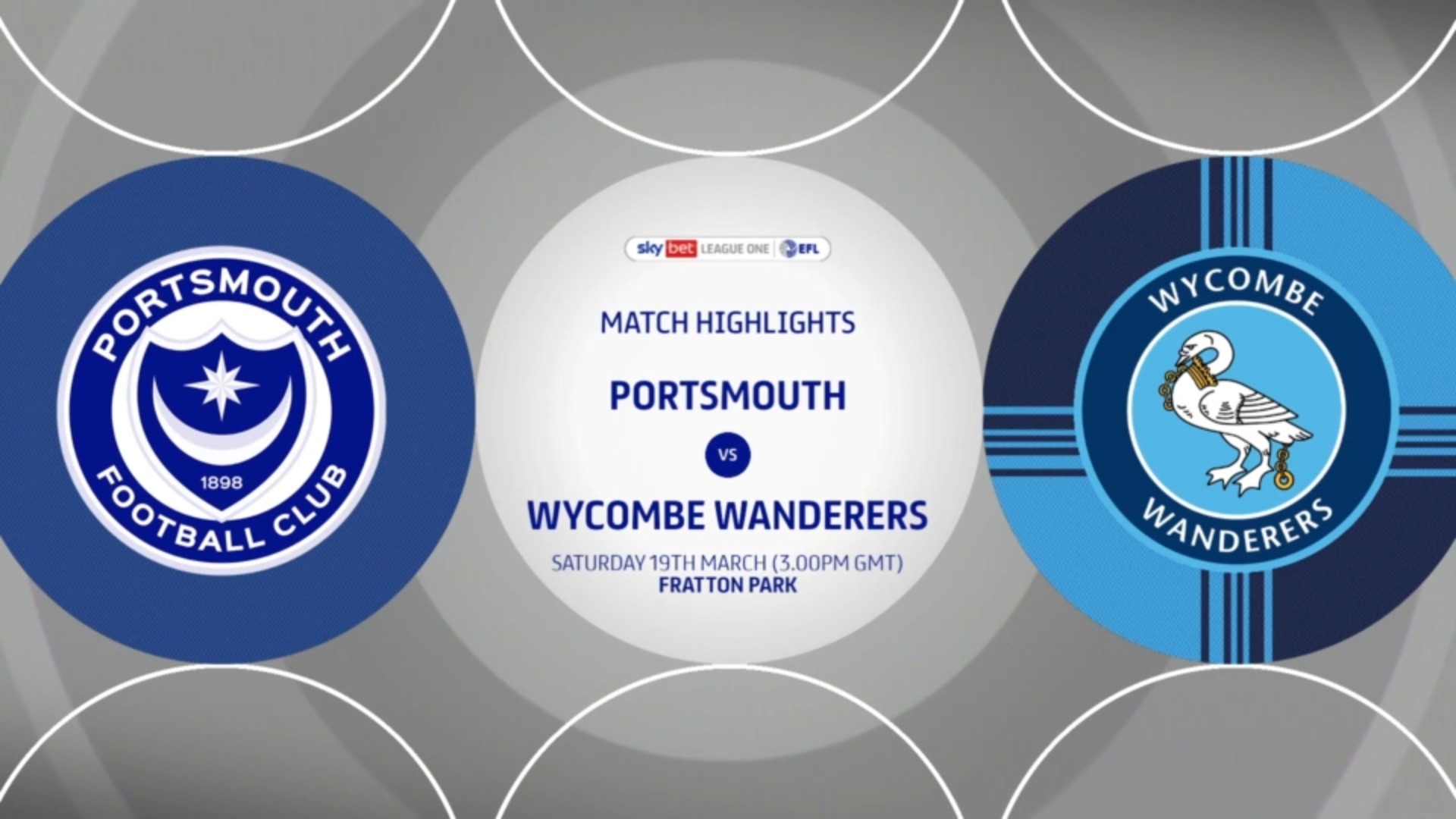 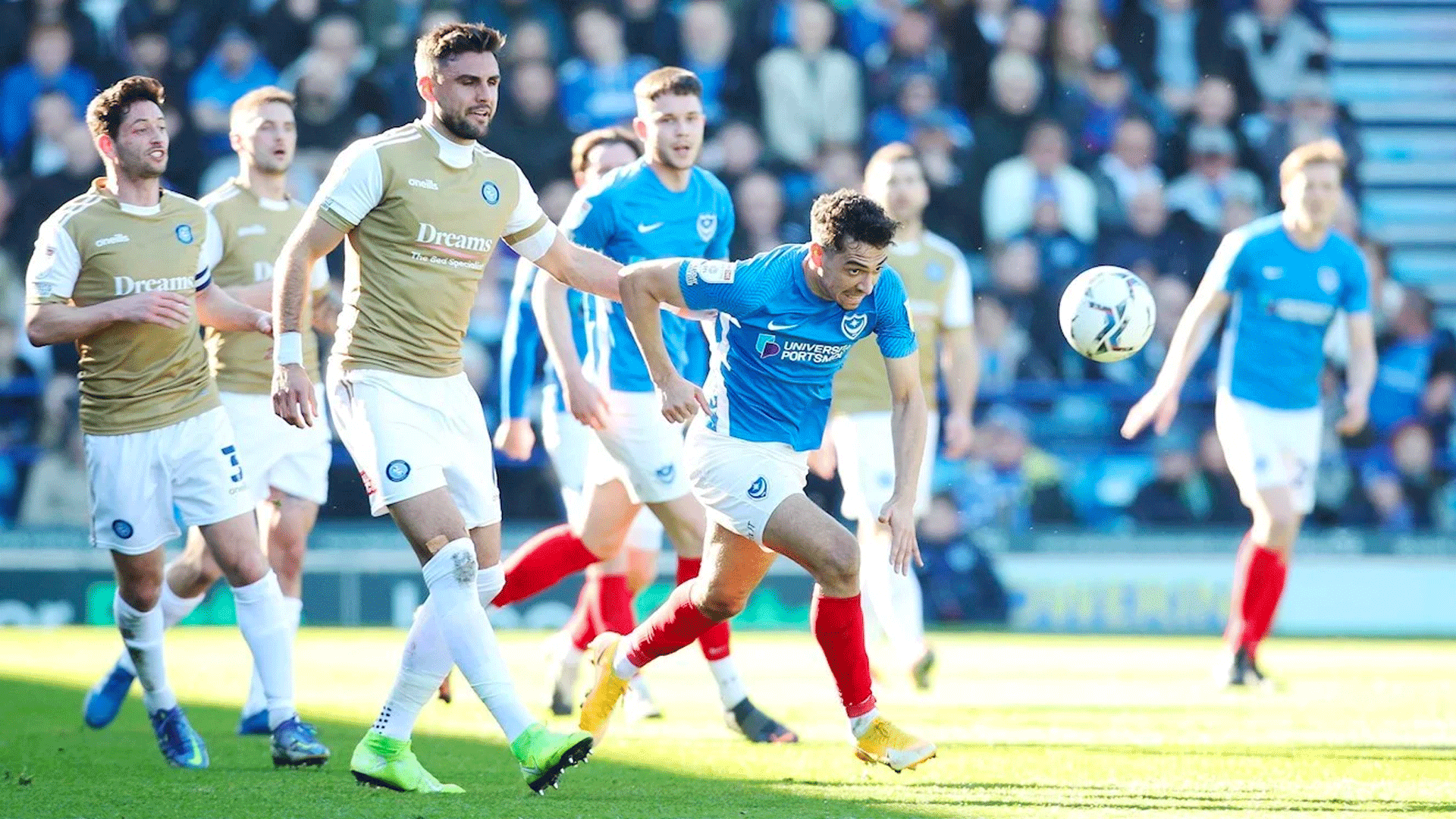