Tonight’s clash with Cheltenham (7.45pm kick-off) is unlikely to provide the same levels of drama as the last time the two sides met on the south coast.

The final day of the 2016/17 campaign will go down in Fratton folklore, as Pompey sensationally snatched the League Two title.

Paul Cook’s troops needed to win and hope that both Plymouth and Doncaster dropped points to claim the silverware.

And that is exactly what happened, with a thumping 6-1 victory ensuring that the Blues – who had not topped the standings all season – finished in first position.

A Daniel O'Shaughnessy own-goal was all that separated the teams at half-time, with Kal Naismith's brace and strikes from Kyle Bennett, Jamal Lowe and Gareth Evans completing the rout.

There was also a contest at Whaddon Road in the second round of the Papa John’s Trophy midway through last term.

Jordy Hiwula’s brace and a maiden Pompey goal for Haji Mnoga saw an unfamiliar line-up ease to a 3-0 success.

That did little to dampen the Robins’ mood that season, however, as they claimed the fourth tier title and came within 10 minutes of knocking Manchester City out of the FA Cup.

Michael Duff’s men are currently sitting 16th in League One, with Matty Blair making up for an earlier own-goal by scoring a stoppage-time leveller against Sheffield Wednesday on Saturday.

TEAM NEWS
Ryan Tunnicliffe is out with a hamstring injury after limping from the pitch towards the end of the first half on Saturday.

Skipper Clark Robertson (hip) is still out of action, along with Ellis Harrison (ankle) and Jayden Reid (knee).

Paul Downing (hamstring) and Liam Vincent (shin) are not in contention after only recently returning to training.

Will Boyle (knee), Taylor Perry (hip), Charlie Raglan (knee) and Callum Wright (knee) are all missing for the visitors.

VIEW FROM THE DRESSING ROOM
Read the thoughts of Danny Cowley and Reeco Hackett or watch the video below.

Fans buying tickets on a matchday can also visit the booth behind the Fratton End, but please note that prices increase if not purchased in advanced.

The Victory Bar will be open for home fans from 5pm this evening.

BETTING
Pompey are the 7/10 favourites with VBET to secure all three points, while the visitors can be backed at 4/1. 
Louis Thompson showed a glimpse of what he is capable of after being handed his first league start for Pompey. 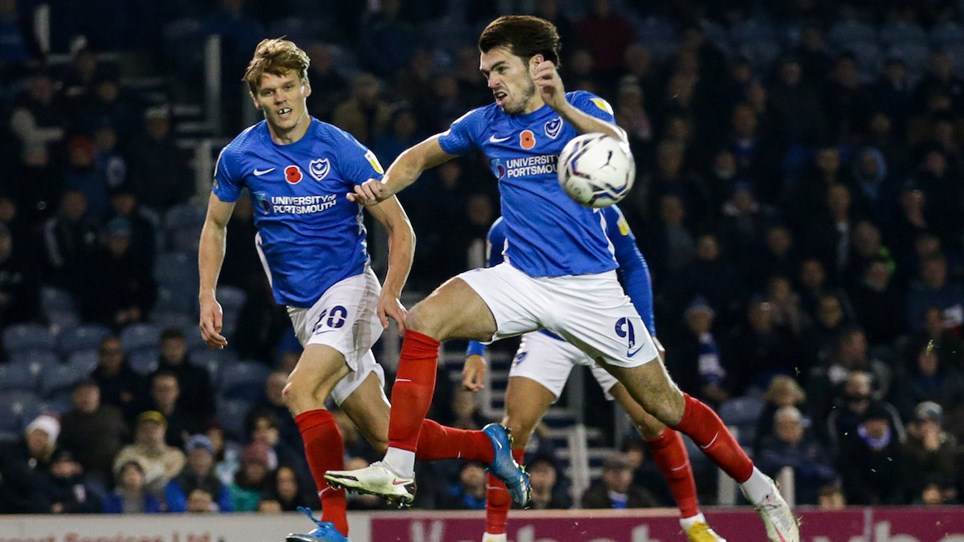 
Pompey's were held to a draw by Cheltenham to extend their unbeaten run in League One to three matches. 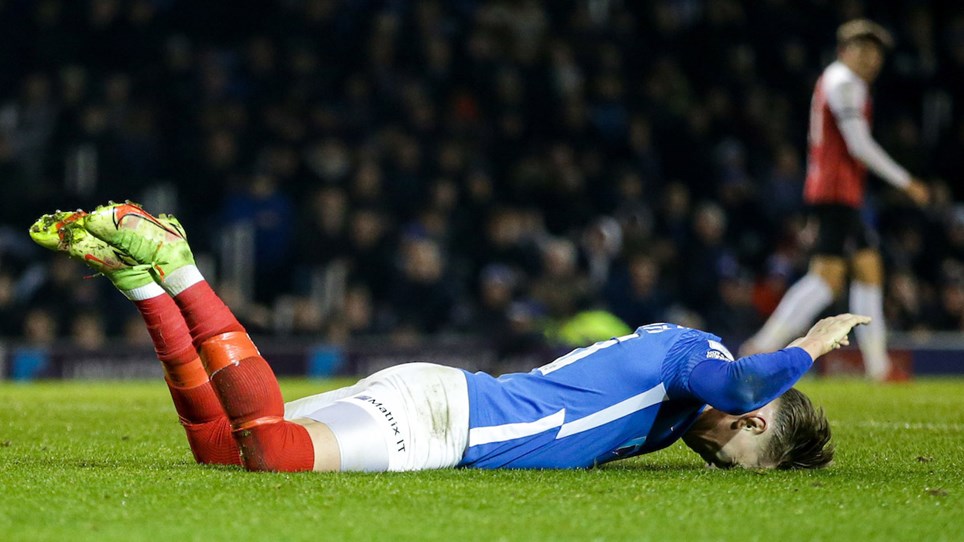 
Pompey had to settle for a draw against Cheltenham, but at least stretched their unbeaten run to three games.


Reeco Hackett took his goal tally for the season to three with Pompey’s first half equaliser against Cheltenham.

Pompey were unable to make it back-to-back victories after being held to a draw by Cheltenham at Fratton Park.

They had recovered from falling behind to Lewis Freestone’s early strike to draw level through a fortunate Reeco Hackett finish.

There were further chances to turn one point into three, but the Blues were unable to convert any of them.

Pompey made a couple of changes from the side that beat Bolton, also on home soil, at the weekend.

Louis Thompson was handed his full league debut, while there was also a return for Joe Morrell, as Shaun Williams dropped to the bench and Ryan Tunnicliffe missed out through injury.

But the Blues got off to a dreadful start and after an Alfie May sighter had been comfortably dealt with by Gavin Bazunu, fell behind with just six minutes on the clock.

A long throw was only partially cleared and the ball ricocheted off Hackett and fell for Freestone to turn sharply and slot into the net.

The hosts were looking sloppy and guilty of too many poor touches to let their promising moments disappear.

When Marcus Harness did swing in a dangerous delivery, the ball narrowly evaded John Marquis and had to be turned behind by Matty Blair.

And the Blues steadily improved as the first half progressed and Hackett should have guided another good Harness cross on target.

Then, following a passage of patient passing play, Thompson surged forward and angled in a shot that was pushed behind by Scott Flinders.

The leveller did arrive on 32 minutes, although HACKETT looked a bit sheepish about the way in which the ball found the net.

Mahlon Romeo’s centre was punched straight to the forward by Flinders, but his shot went straight into the turf before looping home.

Cheltenham should have hit back instantly, only for Kyle Vassell to slip at the vital moment and screw wide from a few yards out.

It was the hosts looking more likely to score again as the interval approached, though, and a fizzer from Morrell flew narrowly over.

They almost went ahead shortly after the restart, when Hackett met a teasing Curtis cross with a glancing header and the ball flashed just past the post.

Curtis then sent another dangerous pass over the Cheltenham back-line, but the ball ran away from Marquis as he tried to get on the end of it.

Some good work from Morrell then opened up another chance just before the hour mark, with the midfielder holding off several challenges before finding Harness.

His centre from the right went over the head of Marquis, but was met by Curtis at the back post and his header flew into the side netting.

Cowley made his first change on 70 minutes, with Thompson being replaced by Williams in the engine room.

Cheltenham were next to threaten, though, and Dan Crowley – just moments after coming on – was furious when team-mate Vassell got in the way of his shot.

Pompey then stole possession and launched their own attack, with Marquis collecting a Harness pass and angling in an attempt that was well saved by Flinders.

Another switch soon followed, as Miguel Azeez was handed his first taste of action since mid-September in place of Hackett.

The newcomer was soon involved in the action, with his corner finding Sean Raggett, whose firm header was kept out by Flinders.

That led to a spot of pinball in the box and several shots were blocked before the Robins were able to clear the danger.

Cowley’s final throw of the dice saw a change of front man, with Marquis brought off for George Hirst.

The Blues kept pushing and when Azeez brought the ball down neatly, Harness swung in a low cross that was swept over by Curtis.

But Cheltenham held on to secure a point – and ensure that a clash between the sides finished all square for the sixth time in their eight meetings.


Louis Thompson showed a glimpse of what he is capable of after being handed his first league start for Pompey.


Pompey's were held to a draw by Cheltenham to extend their unbeaten run in League One to three matches.


Pompey had to settle for a draw against Cheltenham, but at least stretched their unbeaten run to three games.


Reeco Hackett took his goal tally for the season to three with Pompey’s first half equaliser against Cheltenham. 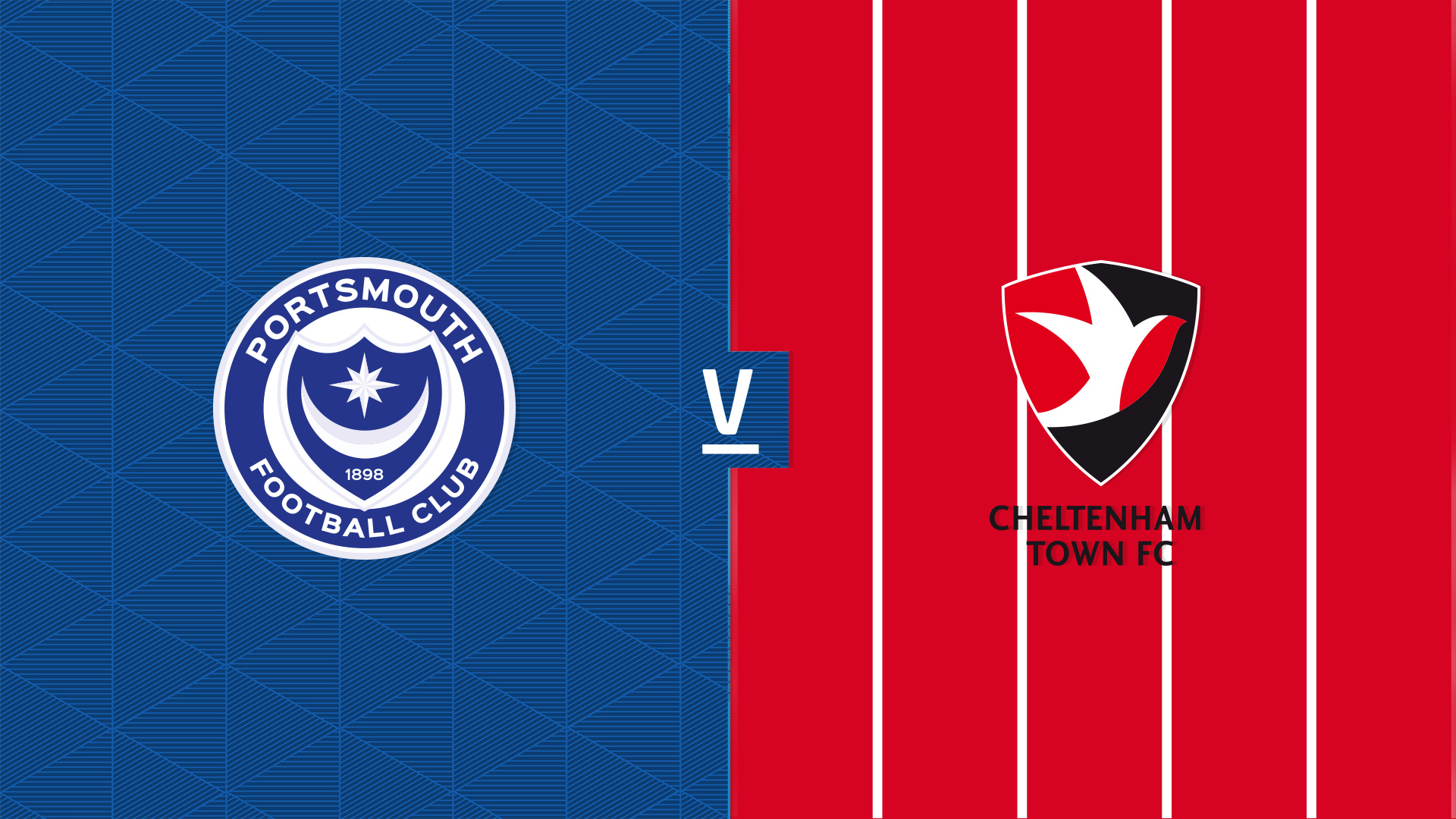 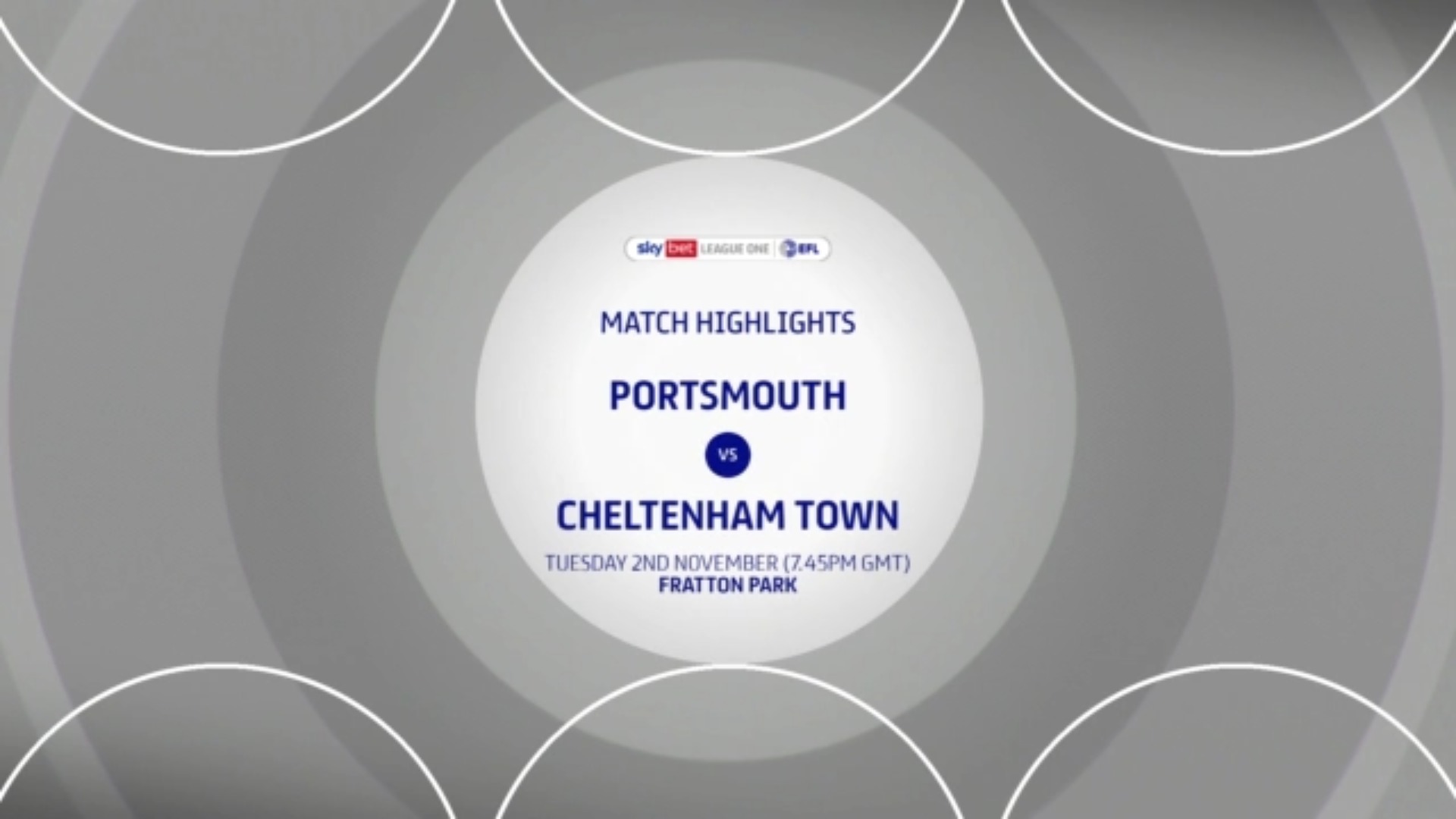 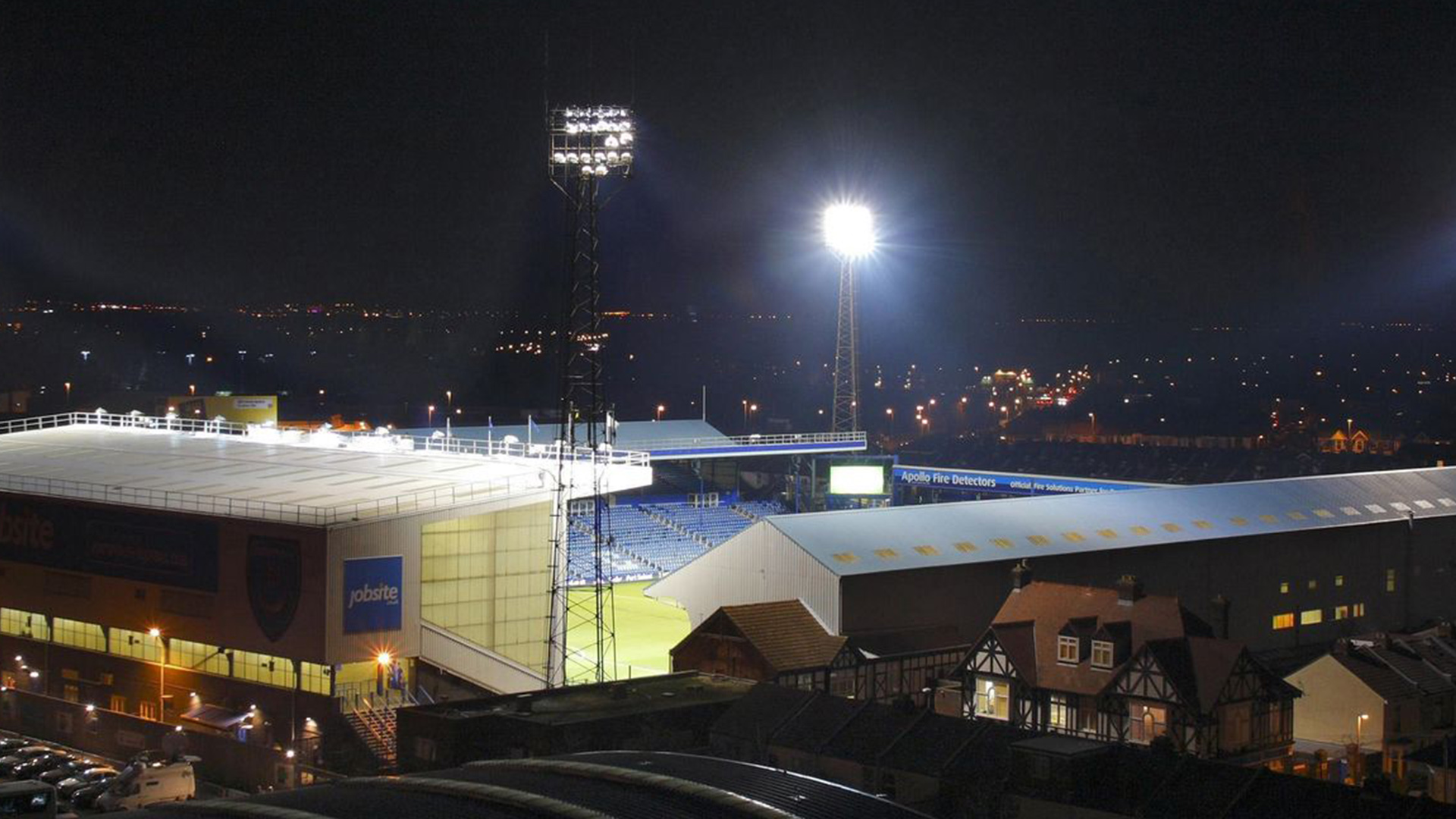