Pompey are aiming to halt a run of three successive League One losses when they host Plymouth this evening (7.45pm kick-off).

The tightness of the division at this early stage, however, means that a win could see them climb from 15th to 6th.

Standing in their way is an in-form Argyle outfit that know three points of their own would secure top spot.

Ryan Lowe’s men have only been beaten once in third tier so far this term – a 2-0 reverse at Rotherham on the opening day.

Their other games on the road have resulted in a 3-0 success at Shrewsbury and 1-0 win over AFC Wimbledon.

A cool finish from Ryan Hardie early in the second half proved enough to secure a maximum haul at Plough Lane on Saturday.

It means that fans will be confidently eyeing a challenge for the Championship and certainly an improvement on last season’s finish of 18th.

Both of the 2020/21 meetings between the sides finished all square at 2-2, with late goals from Ronan Curtis and James Bolton salvaging a point for the Blues at Fratton Park.

TEAM NEWS
Connor Ogilvie (quad) and skipper Clark Robertson (hip) will both miss out after collecting injuries ahead of Saturday’s game.

An ankle problem will deny James Bolton the chance to feature against his former club, while Plymouth are also missing George Cooper (knee) and Niall Ennis (hamstring).

VIEW FROM THE DRESSING ROOM
Read the thoughts of Danny Cowley or watch the video below.

TICKETS
Pompey fans can purchase tickets online here or by the visiting the Anson Road ticket office, which will remain open for 30 minutes after the final whistle.

From 5pm this evening, tickets can also be bought from the booth behind the Fratton End. Please note that there is an increase in price for tickets bought on the day of the game.

Supporters are reminded that this game is not included in season cards and has not been loaded onto any cards.

BETTING
Pompey are the 21/20 favourites with VBET to secure all three points, while the visitors can be backed at 14/5. 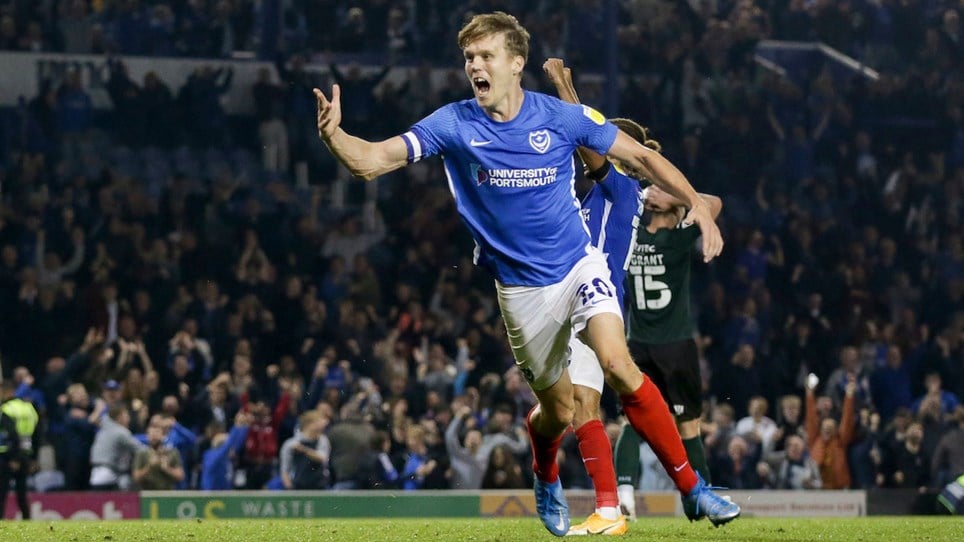 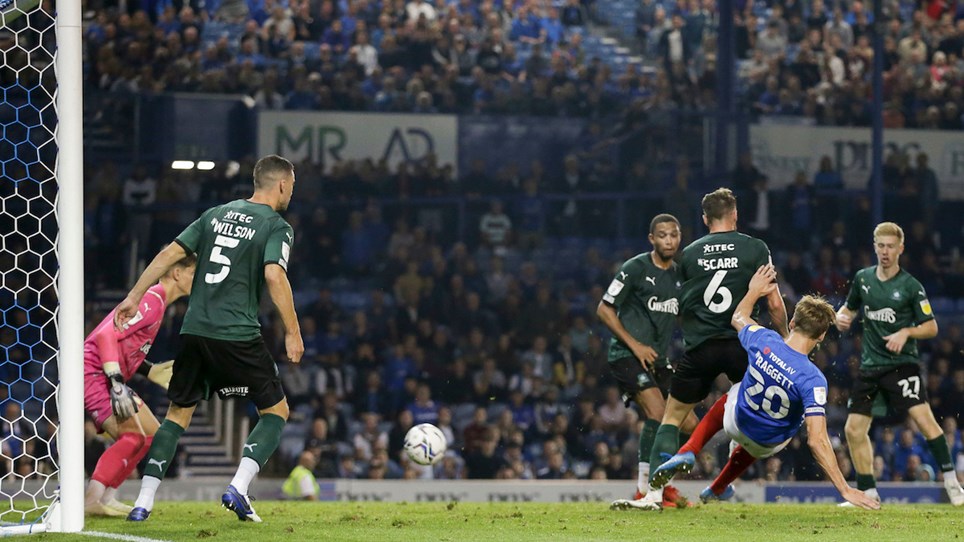 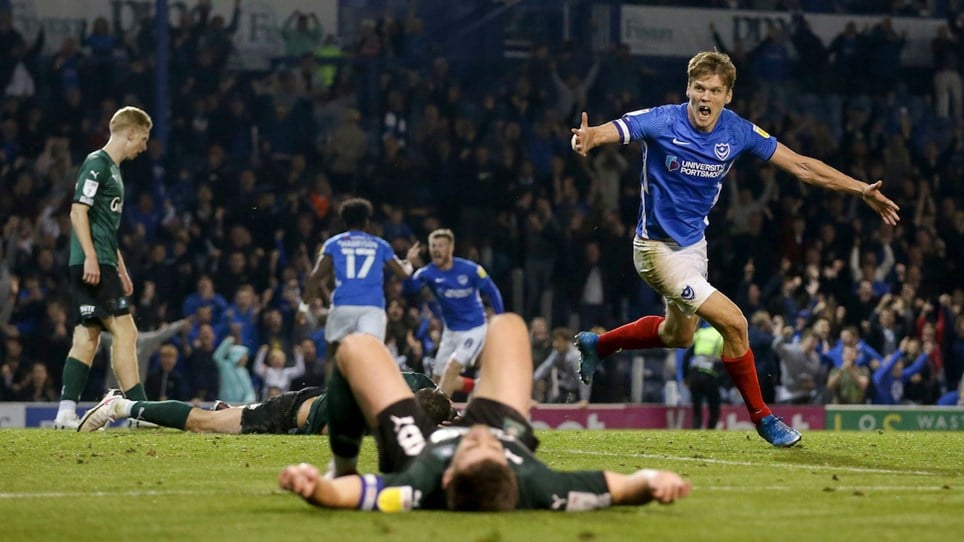 Sean Raggett scored deep into stoppage-time to ensure Pompey and Plymouth would draw 2-2 for the third meeting in succession.

It appeared as though the Blues were slipping to a fourth successive League One defeat after Ryan Hardie raced clear to score twice in the second half at Fratton Park.

That came after Lee Brown had doubled his tally for the season by converting a low free-kick for the hosts in the early stages.

Argyle were seemingly heading for the third tier summit, but Pompey kept pushing and were rewarded for their efforts with Raggett's late contribution.

Danny Cowley made three changes from the side beaten by Cambridge – also on home soil – at the weekend.

Kieron Freeman, Joe Morrell and John Marquis all returned to the starting line-up, as Paul Downing, Miguel Azeez and Ellis Harrison dropped to the bench.

It meant a switch to a 3-4-1-2 system, with Freeman and Shaun Williams either side of Raggett at the back.

Ronan Curtis moved into a more advanced position alongside Marquis, while Marcus Harness floated in behind.

And the change had an instant impact, as the home side broke the deadlock with less than six minutes on the clock.

Conor Grant was booked for bringing down Mahlon Romeo just outside the box, although Pompey players felt the punishment should have been harsher.

Curtis shaped to shoot, but instead it was BROWN who took the free-kick, slotting it under the leaping wall and into the net.

There was a moving tribute to young Blues fan Sophie Fairall, who lost her brave battle with cancer earlier in the week.

Both sets of fans broke out into applause in the 10th minute, with all the players all stopping to join in.

There was then almost another goal when a low Romeo delivery was only cleared as far as Ryan Tunnicliffe.

He tried to sneak the ball inside the near post, but Mike Cooper got down to his left to push it behind.

The contest turned niggly as the first half developed, with referee Carl Brook dishing out a total of six bookings – three for either side – before the break.

Plymouth threatened themselves as the action progressed and Gavin Bazunu dealt with Luke Jephcott’s long-range effort.

Hardie then met Grant’s pass into the box with a neat flick that flashed a matter of inches past the post.

At the other end, Brown tried to repeat his earlier trick in stoppage-time, but this time slammed a free-kick straight into the wall.

The hosts were looking for a strong start to the second half, only to concede within three minutes of the restart.

It came from their own corner, with the ball hacked up the pitch and Freeman only able to head it into the path of Hardie.

The striker raced up the pitch with only the keeper to beat and neatly lifted home his shot to draw Argyle level.

There was a positive reaction from the Fratton faithful, who continued to get behind their side after that setback.

But the goal certainly seemed to knock the players off their stride, with a few sloppy passes seeing moves break down.

Plymouth were next to seriously threaten, with Bazunu off his line to deny Jephcott and the Blues then surviving a scramble in their box.

There was soon a chance at the other end, though, as Romeo’s effort was blocked by Ryan Broom, while Curtis could not get enough power on his header when the ball ran loose.

Romeo was looking particularly lively for the Blues and met Harness’ cross with a fierce volley that rattled the post, although he had strayed narrowly offside.

The latter’s low centre was turned across the face of goal by Curtis, but a stretching Marquis could not guide the ball on target.

Both sides were looking capable of scoring a winner, with the action quickly switching from one end of the pitch to the other.

It was Plymouth who went ahead on 80 minutes, though, after Williams misjudged a Panutche Camara pass and Hardie broke clear to score his second of the night.

A gamble was needed and Freeman and Brown were sacrificed for forwards Reeco Hackett-Fairchild and Harrison.

But Argyle were using up whatever time they could to see out the closing stages – and it appeared they had done their job.

Then, in the final seconds of stoppage-time, Curtis swung in a fine cross that was nodded down by Harrison and RAGGETT turned the ball home from close range.

There was a mixture of relief and delight as Fratton Park erupted, with the final whistle sounding moments later. 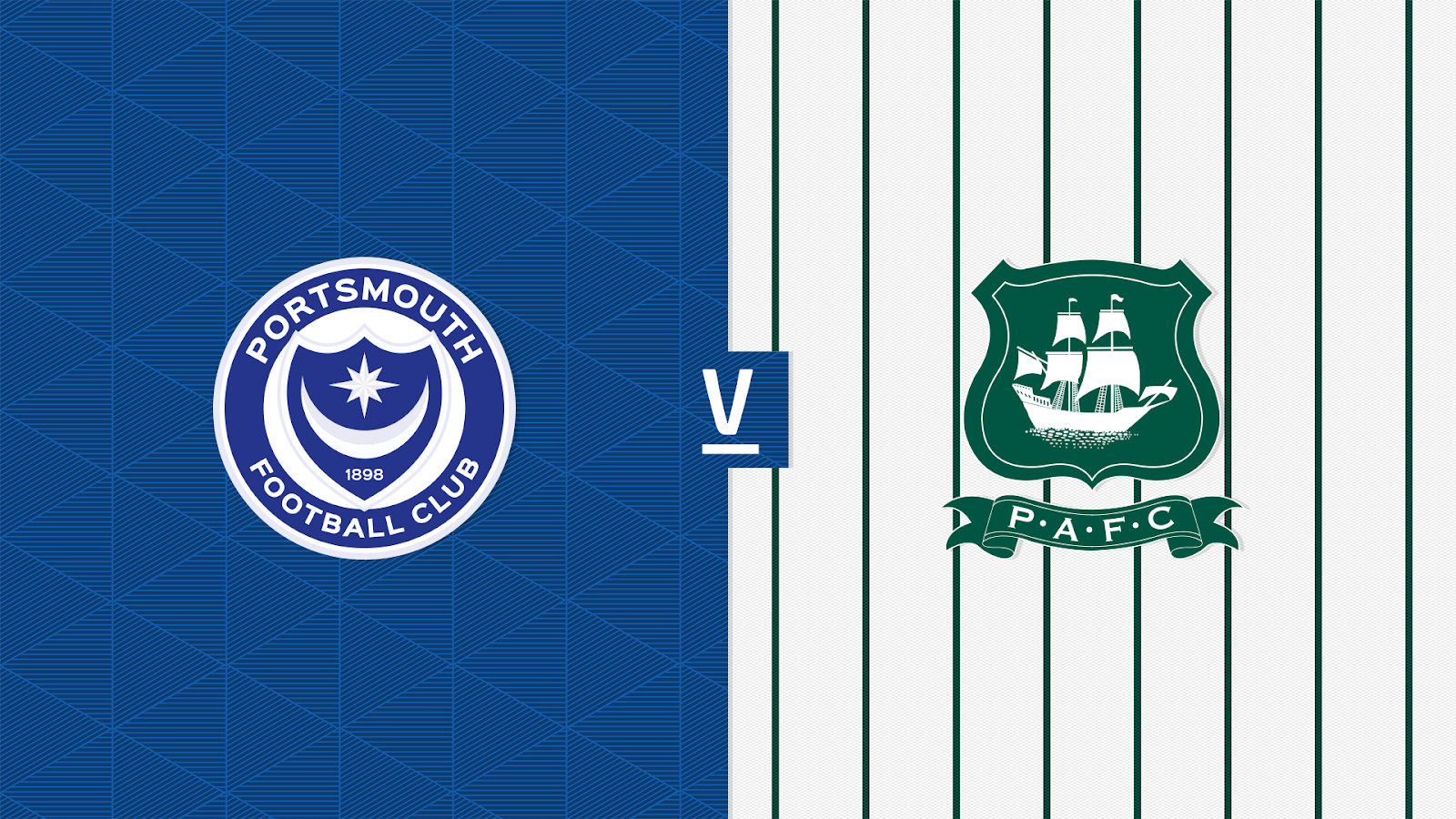 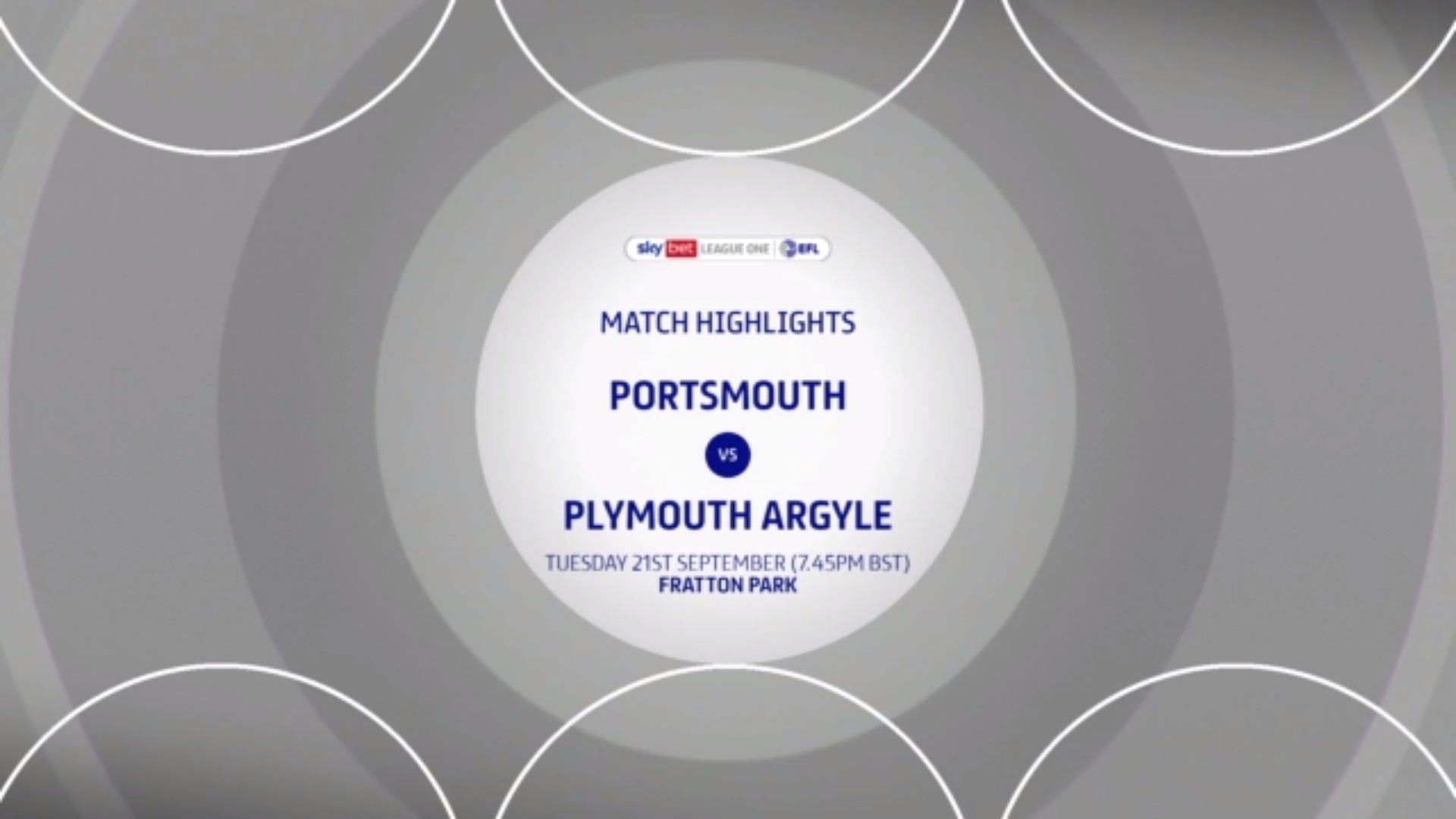 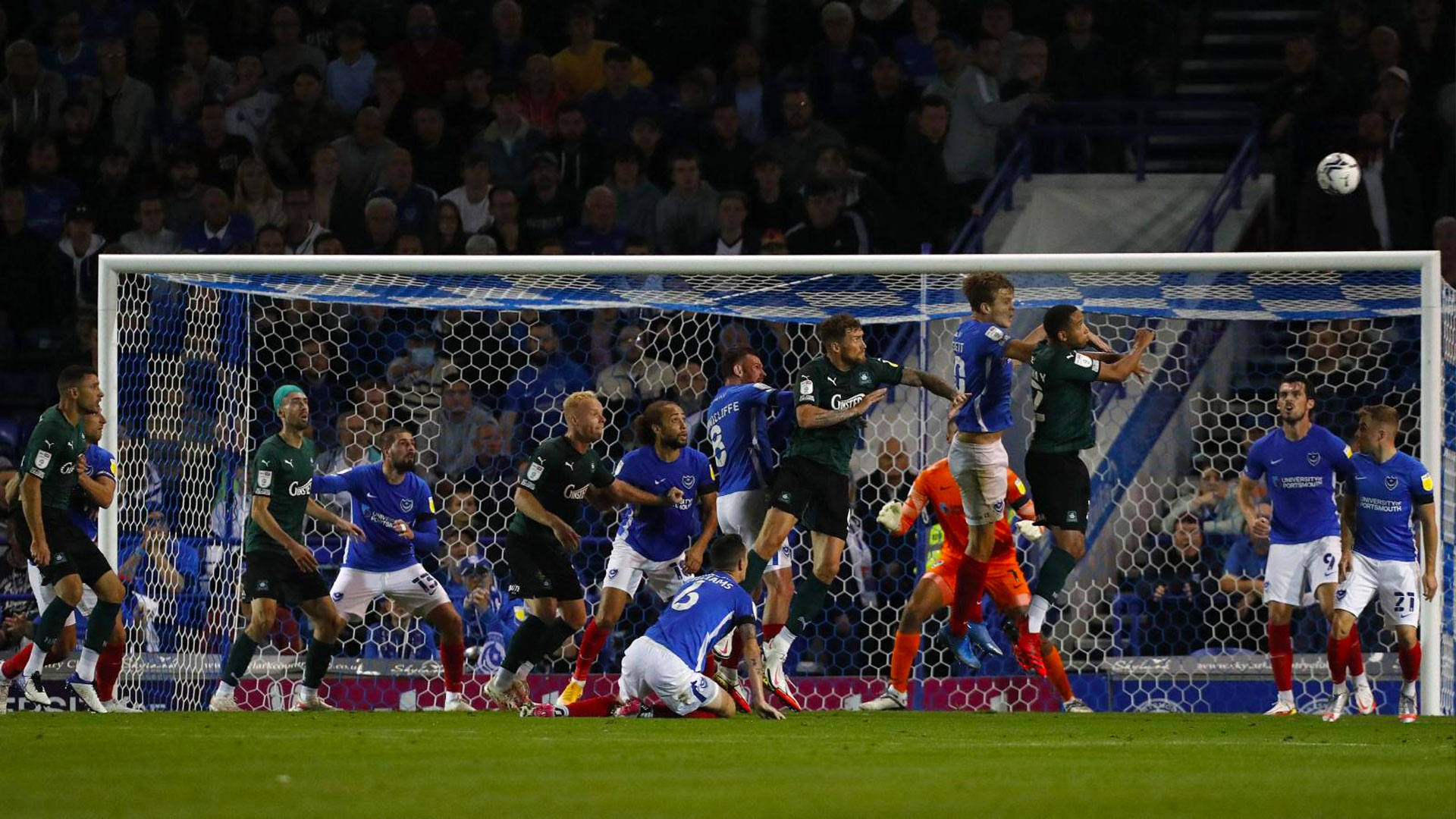