Pompey’s latest Emirates FA Cup adventure begins with a trip to Harrogate Town in front of the BT Sport cameras this evening.

Kenny Jackett’s side will be looking to at least match their run in last season’s competition, when they made it through to the fourth round.

They began with an away game at National League opposition back then, easing to a 4-0 victory over Maidenhead.

Last-gasp wins on the road at Rochdale and – most memorably – Norwich followed before the Blues finally bowed out to QPR in a Loftus Road replay.

They have already enjoyed a run to the third round of the Carabao Cup this term and made it through to the knockout stages of the Leasing.com Trophy.

But after the league, it is this famous old competition that will be treated with most importance by a side who enjoyed Wembley triumphs in both 1939 and 2008.

Town are competing in the first round proper for just the fourth time and have never faced a team from the third tier or higher.

They currently sit seventh in the National League standings, with boss Simon Weaver named the division’s Manager of the Month for October. 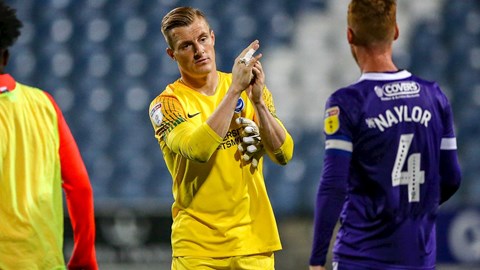 TEAM NEWS
Craig MacGillivray is a doubt to face his former club after a thigh injury kept him out of Tuesday’s league win over Southend.

On-loan Scotland under-21 skipper Ross McCrorie hurt his hamstring against the Shrimpers and is set to be sidelined for 4-6 weeks.

The trio of Oli Hawkins (foot), Bryn Morris (groin) and Jack Whatmough (knee) are all still missing for the Blues.

Former Premier League striker Jon Stead is suspended for the hosts, who are also likely to be without Connor Hall (groin).

VIEW FROM THE DRESSING ROOM
Read the thoughts of Kenny Jackett and Ellis Harrison or register for a free iFollow account to watch the below video.

HEAD TO HEAD
This will be the first competitive meeting between the two clubs.

TICKETS
Pompey have sold out their full allocation of tickets and no more will be made available.

Visiting supporters can enter via the south turnstiles from 5.30pm, but will not be permitted entry to the home side’s 1919 Bar.

The Harrogate Arms (HG1 2QU) is located in the town centre and offer 20 per cent off all food and drink for any supporter with a match ticket.

If you are travelling to the game, click here for more information from the home club.

MATCH COVERAGE
Domestic iFollow subscribers can listen to live commentary from Andrew Moon and Guy Whittingham by signing into their account and visiting the match centre from 7pm tonight.

The match will be screened live on BT Sport 1 in the UK. Supporters based overseas should check local listings to see if the game is being televised in their region.

BETTING
Pompey are the 1/2 favourites with Sky Bet to secure the win, while the hosts can be backed at 5/1.

FA CUP DRAW
The second round draw will take place from approximately 7pm this evening and be screened live on BBC Two.