Football fans are eagerly anticipating a massive match this weekend.

And after Pompey supporters watch their side in pre-season action at Havant & Waterlooville on Saturday, there is the small matter of a European Championship final the following day.

Gareth Southgate’s youthful England side will look to end 55 years of hurt when they take on Italy at Wembley. 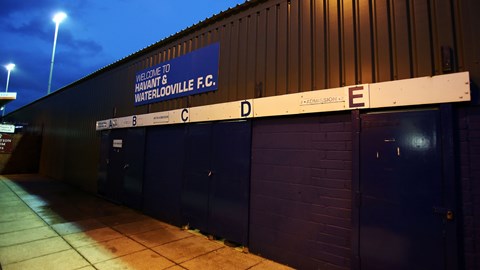 But Danny Cowley is also excited by a friendly clash at Westleigh Park that will see him meet fans for the first time since taking charge.

The Blues boss said: “It’s a good test for the group and Paul Doswell has always had really competitive teams in whatever division they’ve been in.

“He did fantastically well at Sutton and has obviously carried that on at Havant & Waterlooville. I anticipate they’ll be right at the top of the league next season.

"It’s a great couple of days and it’s absolutely brilliant that our supporters will be allowed back for the game."

“I’ve been a non-league manager and I know how important these matches are and we always want to support the community.

“We like the facilities they’ve got and are grateful they allow our women’s team to play there on a regular basis.

“I know a few of their players from back in the day and Paul has been able to put a really good squad together.

“It’s a great couple of days and it’s absolutely brilliant that our supporters will be allowed back for the game.

“We’ve got Havant & Waterlooville v Pompey on the Saturday and then it’s England v Italy on the Sunday – that’s a proper football weekend.

“We’ll have two teams that will play 45 minutes each, as we push on from the game against QPR earlier in the week.

“There’s lots to be positive about and I’m looking forward to the match and hearing the Pompey songs.”