Wembley Stadium will be eerily quiet when the Pompey and Salford players emerge from the tunnel.

Empty grounds are something that have, unfortunately, become a familiar sight due to the Covid-19 pandemic.

But it will be a particularly incongruous experience at a venue that normally holds so many excited supporters.

Blues fans alone had snapped up more than 50,000 tickets for the club’s latest trip to the national stadium when it was postponed last year.

They will get the chance to see if Kenny Jackett’s side can become the first to successfully defend the Papa John’s Trophy – but only from their own sofa.

"Playing at Wembley is an amazing experience and we’re gutted that we won’t have that incredible support from the Pompey fans."

The manager said: “It would be better if the supporters were there to back us – we all remember that amazing day against Sunderland a couple of years ago. 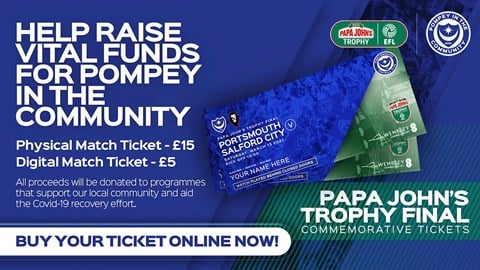 “Competing there without them won’t be the same, but we do want to win the trophy for them if we can.”

Marcus Harness added: “Playing at Wembley is an amazing experience and we’re gutted that we won’t have that incredible support from the Pompey fans.

“But it’s still a great opportunity and we have to try to enjoy the day and make sure we give a good account of ourselves.”

The Fratton faithful will, however, still be represented inside England’s national stadium this afternoon.

A number of supporter clubs and individual fans have provided flags that have been installed in the east side of Wembley.

And hopefully that can provide the inspiration for Tom Naylor and co, as they try to secure another piece of silverware for Pompey.

Who can be #Pompey's next Wembley hero? 👤