Thank you for attending this afternoon’s Sky Bet League One fixture against Sunderland and a warm welcome to everyone associated with the Black Cats, who have made the long journey down to Fratton Park today to be part of a sell-out crowd

We return to Fratton Park after the last-gasp draw with Plymouth, then a really strong and encouraging team performance at Charlton, which was unfortunately followed by a disappointing midweek result at Burton. The games do come thick and fast, with little time to mull over disappointment, and there can be no greater motivation than this afternoon's fixture in front of a full house against Sunderland, who have made an excellent start to the season.

The club were concerned to read reports this week suggesting a lack of financial commitment to our academy. This could not be further from the truth, especially given Tornante’s multi-million-pound purchase of Roko this summer and their ever-increasing annual investment towards supporting and financing the academy operation.

The owners’ decision this summer to heavily invest in Roko is all part of the strategy to improve the prospects for young talent to achieve their dream of one day representing their local professional football club. This has come at a time when many clubs have chosen to scale back on their own academies in the wake of the financial pressures that have arisen from the pandemic, with some other academy committed clubs cancelling or mothballing infrastructure projects altogether.

Our own academy operation continues to receive a substantial investment each year from our owners. In fact, the annual academy spend has now increased to just under £1 million and according to the last EFL benchmarking report, this yearly investment is 20 per cent above the average for category three academy clubs.

Further to those reports of lack of investment, the club – and in particular the academy – were also distressed to read reports on social media of staff ‘mass resignations’. Yet again, these reports are simply not correct. We have had some departures over the summer, but most have been for very positive reasons. Some have progressed into first team roles both at Pompey and other clubs, while some of those in non-coaching roles have been able to achieve career promotions in their respective disciplines. Just as all academy players want to realise the dream of becoming a full-time professional footballer, many academy staff will have their own career aspirations, to progress to the highest level, and academies provide a great opportunity and a clear pathway to realising such personal dreams. The recent positive progression we have witnessed demonstrates that we have some very talented staff capable of achieving great things in their own careers and that time spent at Pompey, developing themselves, can only benefit the club in the long-term.

Sean O’Driscoll has, over the past two-and-a-half years, played a large part in developing many of our full and part-time coaches and we were all disappointed to learn a few weeks ago that he would be stepping down from his role as academy head of coaching. Sean’s vast experience in football has been of immense value and benefit to the club and we will miss him greatly as he seeks to spend more time with his family, away from the seven-days-a-week and unsocial demands of academy football. He will continue to work here over the next few months and we have already had interest from, and identified some, potential exciting candidates, who have the ability to support and develop all our academy coaches. We hope to be able to conclude the recruitment process over the next few weeks.

As I mentioned in my programme notes for the Cambridge game, our football development is to be underpinned by four core objectives – to create and implement a football philosophy, identity and exciting style of play that become synonymous with Portsmouth Football Club from the academy to the first team; to be openminded in our recruitment of players to fit that philosophy and identity; to provide a greater number of homegrown club developed players through good academy recruitment, so establishing a clear pathway to the first team; and finally to create and deliver a high-performance culture across the whole club.

That is why we have already started to deliver a process of aligning every aspect of the academy operations to the first team departments, with all staff across both operations working closely with each other. This is something being personally driven and led by Danny Cowley and our academy manager Greg Miller. Without this process, there can be no joined-up approach or any prospect of realising any of the four guiding principles outlined above.

It is important that we share the vision and plans for our academy with you all, and Greg and I will shortly be using the various supporter forums we have in place to articulate these in a proper and correct manner to provide clarity and create support for what we all want to achieve.

Finally, I would like to thank you all for your support – not just today, but for travelling in such fantastic numbers at Charlton and Burton. We all do very much appreciate such passionate commitment and that simply instils us with a greater determination towards achieving something special by possessing a clear sense of purpose and direction, a strategy and a plan to achieve the goals that will realise ultimate and sustained success for every Pompey supporter.


Thank you for joining us for this evening’s Sky Bet League One fixture against Ipswich Town. I would like to extend a warm welcome to everyone who has made the long midweek journey from Suffolk and... 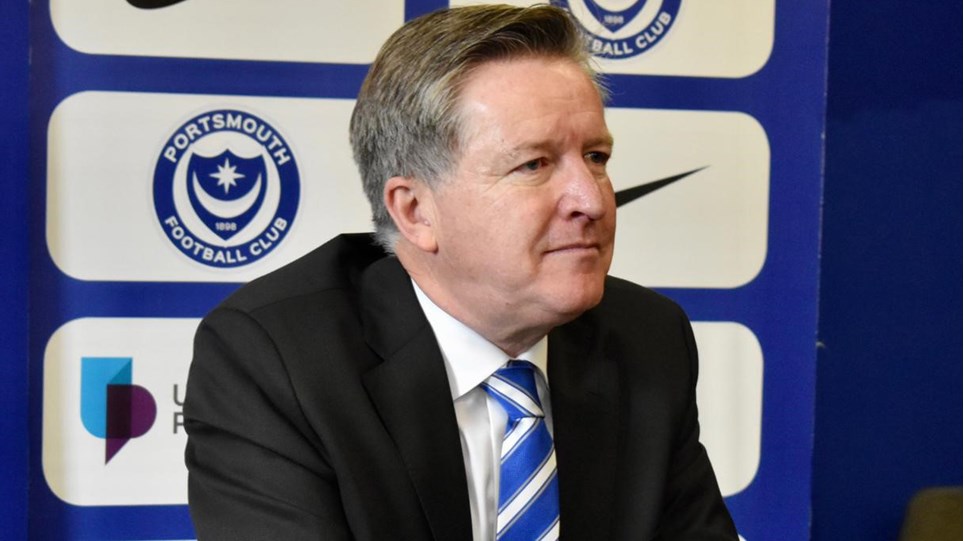 
We asked fans to send in their questions for chief executive Andrew Cullen and he went through a selection of your posers.