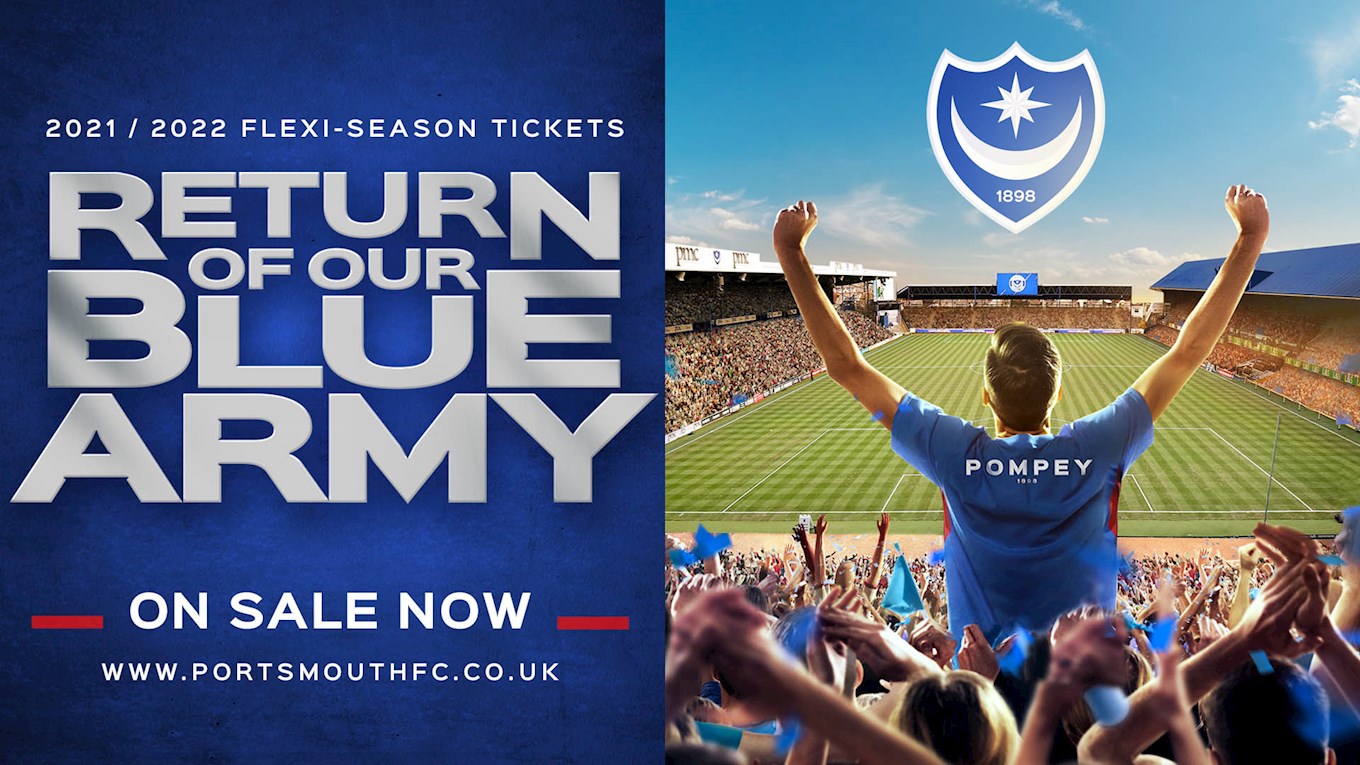 Following consultation with the Tony Goodall Fans’ Conference and Heritage & Advisory Board, Portsmouth Football Club will continue to offer flexi-season tickets for the 2021/22 campaign.

With the vaccination programme going well, it is looking positive for fans being able to return to Fratton Park next term.

However, we are still waiting for assurances as to how many people can be inside the stadium and what measures are required to ensure Fratton Park remains Covid secure.

All flexi-season ticket holders will then choose – or be placed into – a group, so that in the event of games being played with a reduced capacity, tickets can be allocated on a rotational basis.

Purchasing a 2021/22 flexi-season ticket ensures that supporters will be able to secure their season ticket for the following (2022/23) campaign.

You will also be able to take advantage of the club’s new fan loyalty and rewards programme. Click here for more details.

There will also be a charge of £2.50 to cover the cost of your season card and postage.
Once on the scheme, flexi-season ticket holders will have the ‘right’ to purchase tickets at an ‘early bird’ match price.

These prices have yet to be confirmed and will be announced in due course.

They will have until 5pm on Friday, June 4 to secure their flexi-season ticket.

Supporters will be able to buy their flexi-season ticket online here and are able to use any credit currently in their account.

Information on how flexi-season ticket holders can buy tickets for individual matches will be announced in due course.

Additional Information
Groups will be allocated games in accordance with the stadium capacity and the government guidelines at that time.

The allocation of stands and seats will depend on the capacity restrictions and it is, therefore, unlikely that supporters will be able to sit in their usual seat during the 2021/22 season.

The club have the flexibility to covert back to pro-rata season tickets if and when the capacity goes back up to 100 per cent and remains at full capacity.

In the event of flexi-season ticket holders opting not to buy tickets for games they are allocated, then these seats will be redistributed to other groups, as well as members.

Will I receive a new season card if I purchase a flexi-season ticket?
Yes, new cards will be sent out to all flexi-season tickets. They will be used for entry for the stadium and also as a pre-paid payment card as part of the club’s innovative new loyalty programme.

What happens if social distancing measures are relaxed and Fratton Park can operate at full capacity?
When games are able to be played at full capacity on a regular basis, the club will be able to convert flexi-season tickets into a full season ticket after consulting with supporters.

If I have to buy tickets for individual matches, could I end up paying considerably more money than usual over the course of a season?
The flexi-season ticket scheme gives the club the ability to keep the pricing structure under constant review to ensure they do not pay substantially more than if they bought a standard season ticket.

Why have my seat details changed?
Some of the seats in the North Stand Upper and South Stand Upper have been renumbered, but your flexi-season ticket is still linked to the same seat.

Will I be able to sit in my usual seat during the 2021/22 campaign?
If social distancing measures are required, then it is unlikely that you will be able sit in your allocated seat.

Can I move to a different seat?
This is not currently possible. If/when we are able to return to a full capacity on a regular basis, then there will be an opportunity to swap seats. 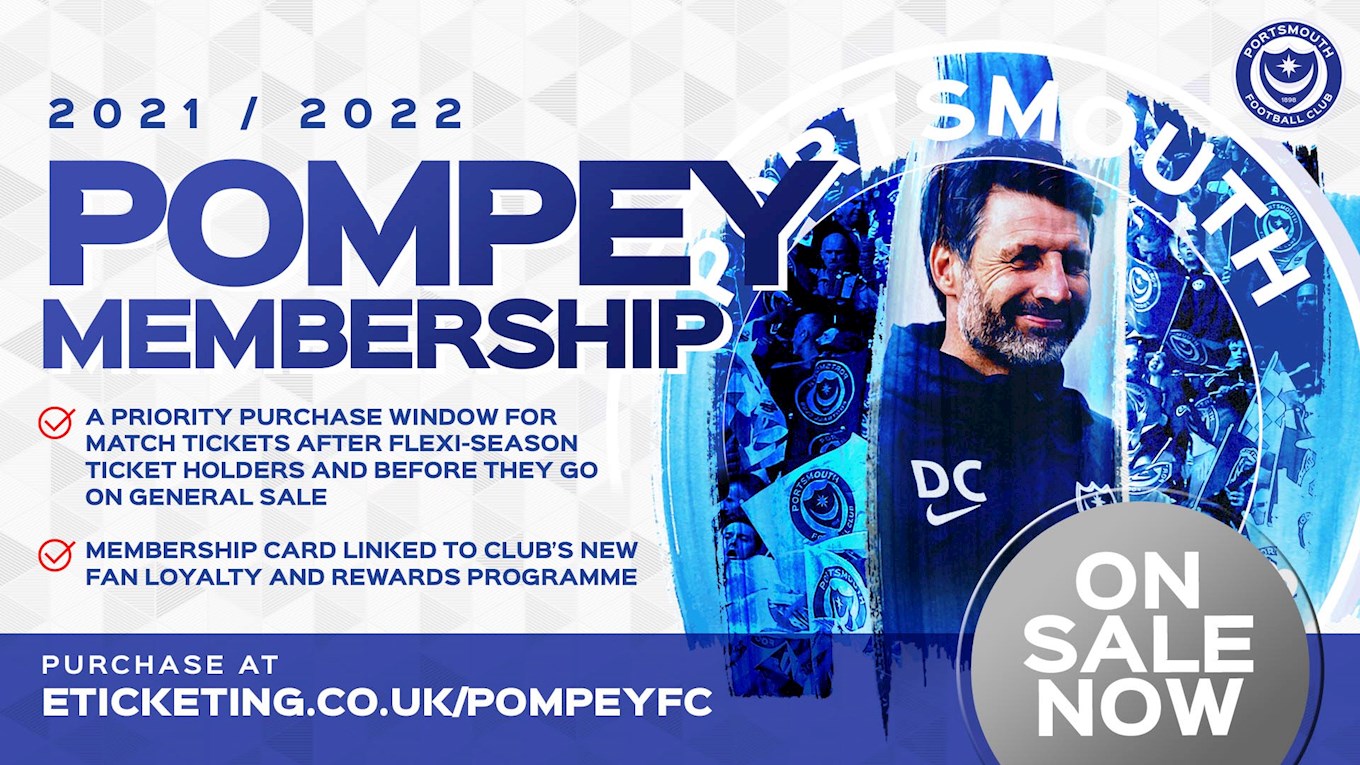 Pompey fans can join the club’s official membership scheme to increase their chances of securing tickets during the 2021/22 campaign.

Those supporters who are not eligible can instead become a member, allowing them to buy match tickets before they go on general sale.

This benefit could prove particularly popular with the potential of games being played with a reduced capacity.

Members can also take advantage of the club’s new loyalty and rewards programme, while there are other fantastic benefits.

Click here to secure your 2021/22 Pompey membership for just £25 (plus a charge of £2.50 to cover the cost of your membership card and postage).

The Pompey membership scheme is for supporters aged 16 or over, with younger fans able to join the Junior Blues.

Unfortunately, supporters are unable to purchase a Pompey Membership and Junior Blues membership in the same transaction. To complete your order please purchase each of these items separately. We apologise for any inconvenience this may cause. 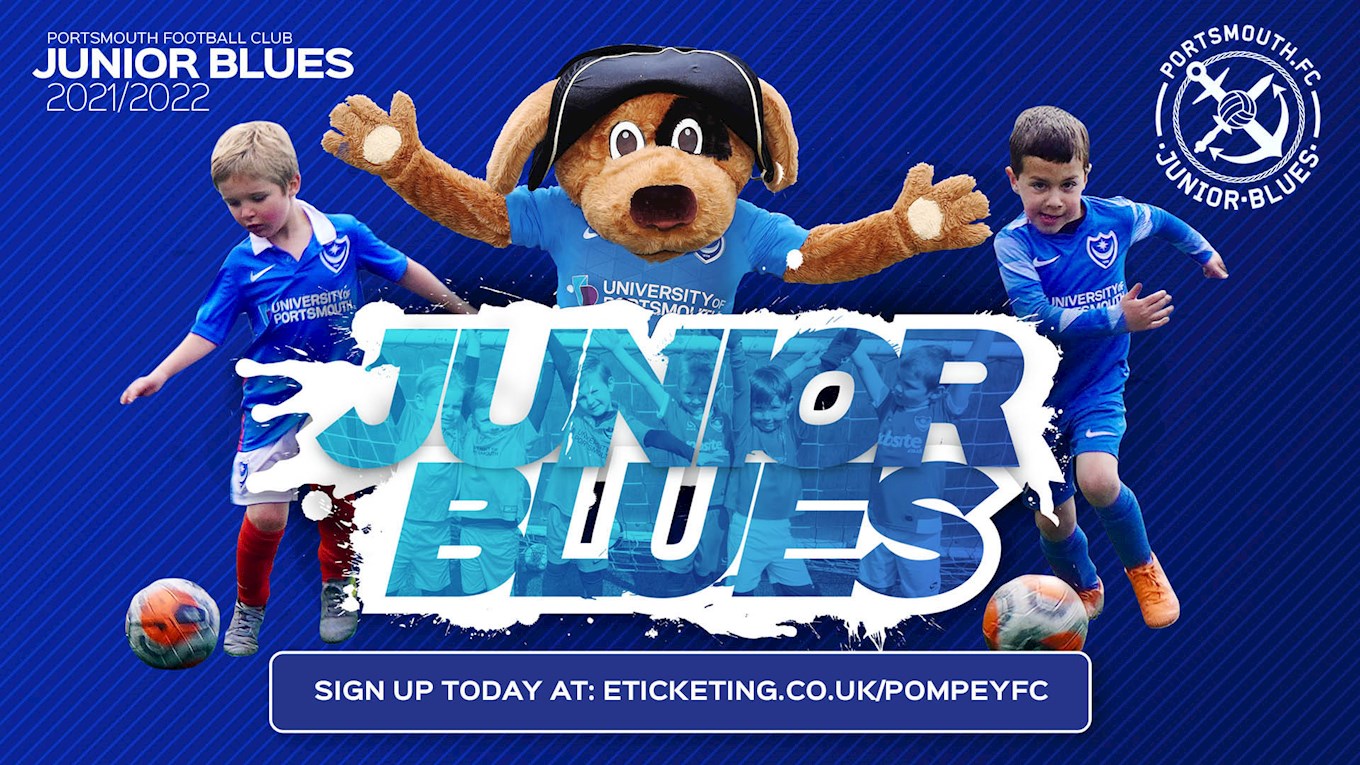 Young Pompey supporters can sign up to the Junior Blues scheme for the 2021/22 season and receive a selection of fantastic gifts and discounts.

It provides the same ticketing privileges as the official Pompey membership – ensuring fans aged 15 and under have access to a priority purchase window* to purchase match tickets at Fratton Park during the forthcoming campaign.

As a Junior Blues member, you will also be able to enter incredible competitions and enjoy discounts on Pompey in the Community (PitC) coaching courses.

And fans will receive their very own membership pack – which contains fantastic Junior Blues memorabilia.

All members will receive a birthday and Christmas card posted straight to their door to celebrate the special occasion with their favourite team.

Junior Blues packages are now on sale and can be purchased online here. They are priced just £20 when choosing to collect** from the PitC offices in Anson Road.

Alternatively, supporters can opt for the pack to be delivered for an additional £3.50.***

*Members will receive a priority window after flexi-season ticket holders, but before tickets go on general sale
**Members will be notified via email when their packs are ready for collection
***Postage to non UK territories will cost more – please contact PitC directly to arrange payment for this

Unfortunately, supporters are unable to purchase a Pompey Membership and Junior Blues membership in the same transaction. To complete your order please purchase each of these items separately. We apologise for any inconvenience this may cause.